A sporty teenager who went from training for his judo black belt to forgetting how to walk has now taken his first steps in two years.

The inspirational moment where Conor Lewis made the tentative attempts which left his physiotherapy team in tears was captured on camera.

Now 18, he had been fit and healthy schoolboy until he was rushed to hospital with severe ‘twitching’ in his head and shoulders then developed violent seizures in September 2015.

After being diagnosed with functional neurological disorder (FND), the youngster became a ‘prisoner in his own home’.

But through determination and physical therapy, the sports student made progress that has amazed his family and doctors. 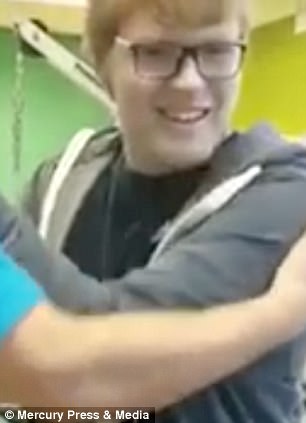 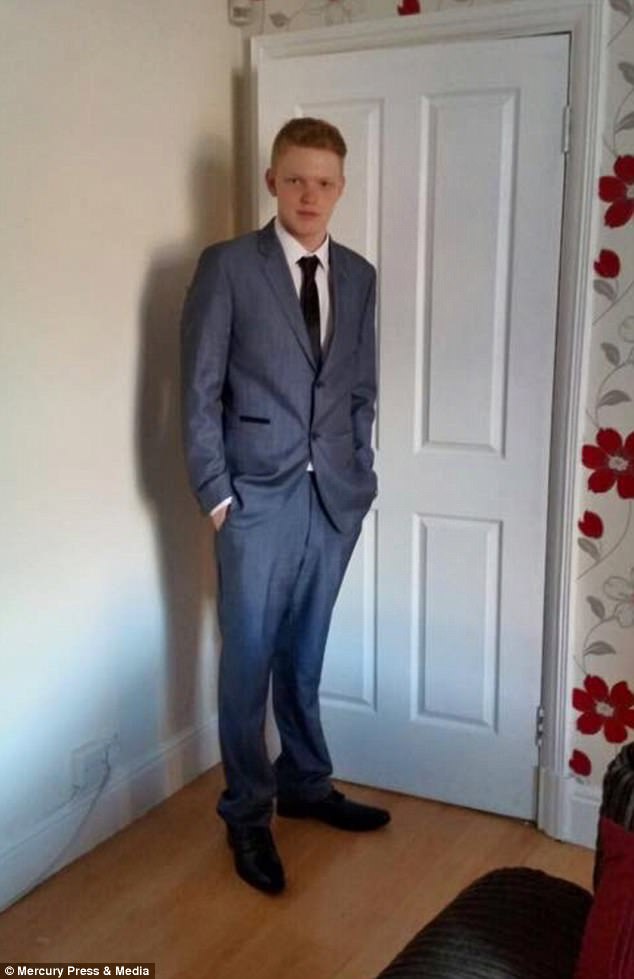 He was diagnosed with ‘medically unexplained’ functional neurological disorder

The video, recorded by his proud physiotherapy team, shows Conor struggling to even move his legs at first but after 15 minutes he is bravely taking his first steps.

Mother Rachel, from Forest Town, Nottinghamshire, said: ‘When I saw this video, it was like magic. I was sat at home having a coffee then these videos starting being sent.

‘It was crazy how it just happened. His physio decided to take off the leg braces and noticed Conor was weight-bearing so they just tried it out and it was such a surprise.’

She praised her son for his positive attitude throughout his ordeal.

‘He has never given up or had a “why me” attitude and I feel he will one day be able to at least walk normally some of the time and maybe just be a part-time “wheely”.

‘Considering we thought he would never walk again, anything is an blessing.

‘One of his physiotherapists recorded him taking the steps for me and he had the whole room in tears.

‘He had gone from being barely able to move his legs to taking multiple steps in the space of 15 minutes.’

Conor’s life change dramatically when his sudden symptoms saw him going from an active teenager to needing a wheelchair full-time in the space of six weeks.

Due to the complex nature of FND, doctors said there was nothing they could do to heal him straight away.

Rachel said that at the time it felt like their ‘life stopped’.

She said: ‘At 16, Conor was rushed into hospital with severe twitching in his head and shoulders while training for his judo black belt.

‘He was perfectly well and healthy before. He had just been feeling a bit off the day before.

‘He was admitted and over the next few days started having violent seizures which lasted up to six-seven hours.

‘He was kept in for six days then released after being referred to a specialist.

‘When numerous tests came back negative, he was discharged with a diagnosis of FND and we were told there was little they could do.

‘Over the next few weeks, Conor deteriorated having violent seizures almost daily and severe pain in his legs. He was able to use a walking frame for a few weeks but was in a wheelchair after six weeks for his own safety.

‘They don’t really know the cause behind it and therefore there isn’t just one treatment.’ 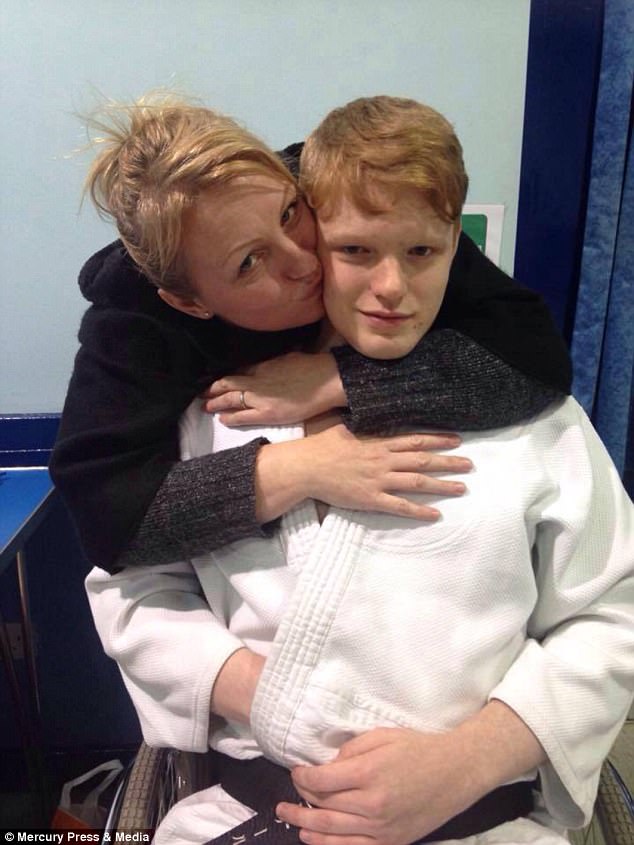 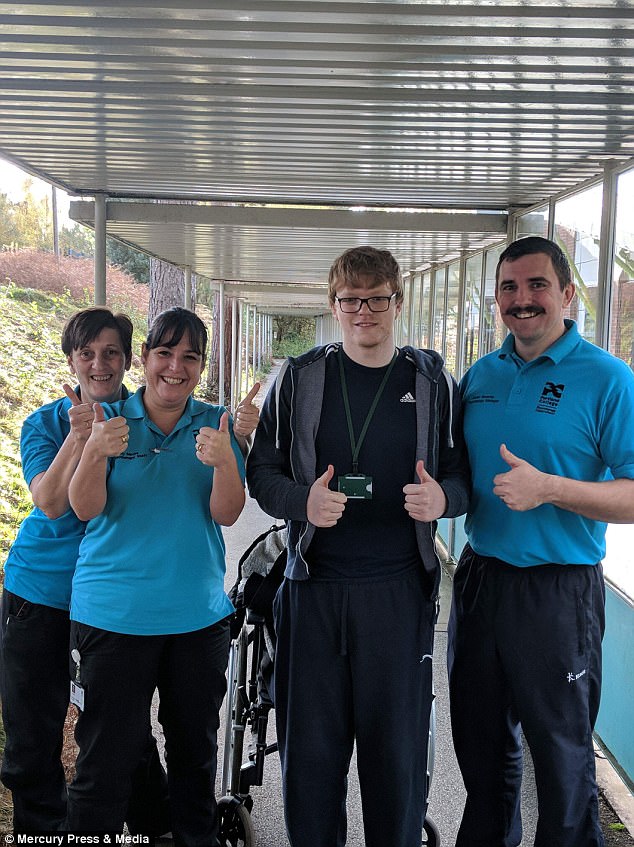 His physiotherapy team unexpectedly captured him walking after years of therapy 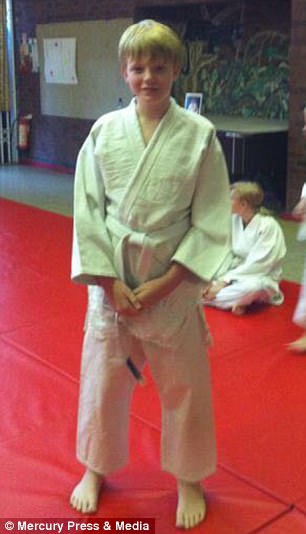 Due to the complex nature of FND, doctors said there was little they could do except wait and see how Conor recovered with physio

Also struggling with two teenagers and a full-time job, Rachel was forced to give up work as a shift manager at a bakery and care for Conor full-time.

Rachel said: ‘It affected my life massively. I went from having three very independent teenagers, a really good career path and being financially comfortable after years of working to support my children.

‘At first, I thought I would just be having time off while Conor recovered but quickly realised he was actually getting worse to the point after six weeks out of hospital he was losing his legs completely and having almost daily very violent seizures.

‘Having to go onto benefits which was a big blow financially and mentally.’

Conor deteriorated so much that he had to move downstairs for his own safety which meant no access to shower or toilet, so he had a commode and a bed bath.

Rachel said she faced a delay until she could move to a suitable house which left them feeling like prisoners.

‘Our occupational therapist helped us apply for an adapted property but it was six months before one became available and in that time we were virtual prisoners living in one room as I couldn’t get him out of the house without help.

‘This made all the difference as he was able to use the toilet, shower and access the whole house and garden

‘We moved house eventually which created debt but at least we had some kind of life again.’

Rachel Conor’s seizures even caused her physical injury and she dislocated her shoulder.

Looking to the future

Conor is now currently studying a disability sports course at Portland Training College which his mother said ‘was a turning point for him mentally’.

He also has a new girlfriend Rebecca he met at the college who he thanks for her support in helping him turn things around.

Conor said: ‘I took those steps last Friday. It was amazing to do that but I felt really tired out that weekend.

‘We are working now to try and make sure I’m not tiring myself out too much.

‘Having FND definitely changed my life but actually, I’ve become much more positive. 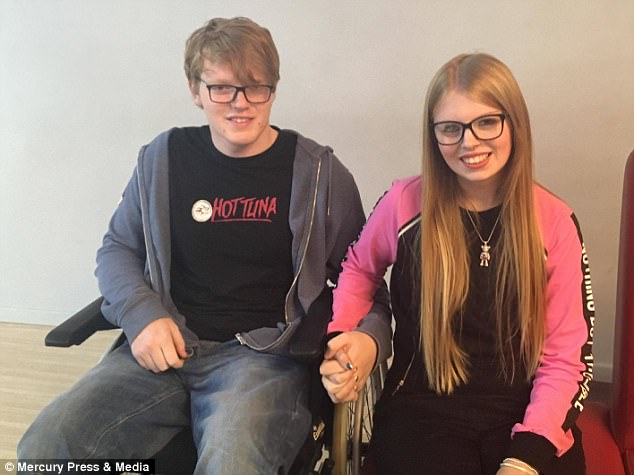 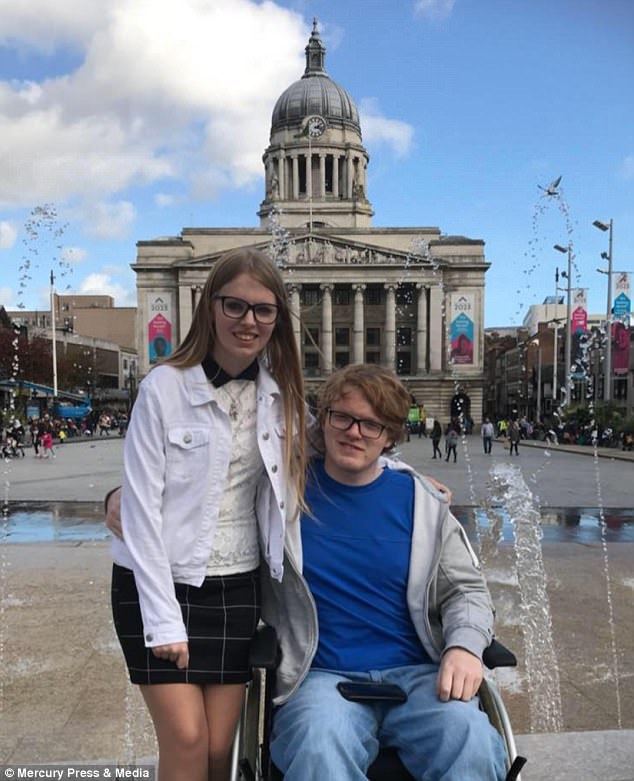 The young couple enjoy their time together despite Conors physical challenges

‘It’s always a worry that I’ll get worse again and lose my ability to use my legs fully in the future but it’s just a case of keeping at it. When I took those steps I didn’t want to stop.

‘Rebecca doesn’t mind that I have FND.’

Rachel said Conor is not 100 per cent back to ‘normal’ but they remain hopeful.

‘He still has a lot of work to do, he can only walk short distances extremely slowly and he needs a lot of support, but he is practicing every day.’