It seems like nearly anything can happen on the Premier League final day.

Players are just one game away from jetting off on their summer holidays and focus can be an issue – especially if their team has nothing left to play for. Historically, top flight stars have been accused of ‘being on the beach’ after a poor showing.

For others, the entire season could still be at stake, and the contrasting motivations can lead to some bizarre scorelines and stories as teams desperately scrap for the title, top four or relegation.

This year, two Champions League spots are still up for grabs, while two teams are set to be relegated to the Championship. The ten games on offer should provide plenty of entertainment as teams finish off what has already been a bizarre season during a worldwide pandemic.

Ahead of the final day, Sportsmail has taken a look back at some of the strangest matches at the end of a Premier League campaign.

Take the ball to the corner flag in the dying minutes and see out a result – a great strategy in a desperate situation where you need points. All good and well providing the scoreline you’re defending is enough.

Manchester City went down in bizarre circumstances in the 1995-1996 season after at 2-2 draw against Liverpool.

To stay up, they had to better Southampton’s result against Wimbledon, and got off to a bad start when Steve McManaman’s cross went in off Steve Lomas after just ten minutes.

It got worse when Ian Rush made it two but City thought they had pulled off a survival miracle as Uwe Rosler and Kit Symons got them back level.

Manager Alan Ball had heard that Southampton had gone a goal down at the Dell and quickly told defender Lomas to get the ball into the corner, with their draw seemingly enough to keep them in the division.

Except the Saints were actually still drawing 0-0 and City soon realised they needed another goal to survive after Niall Quinn was subbed off and saw the score on TV. But by that point it was too late and they were sent down in farcical scenes. 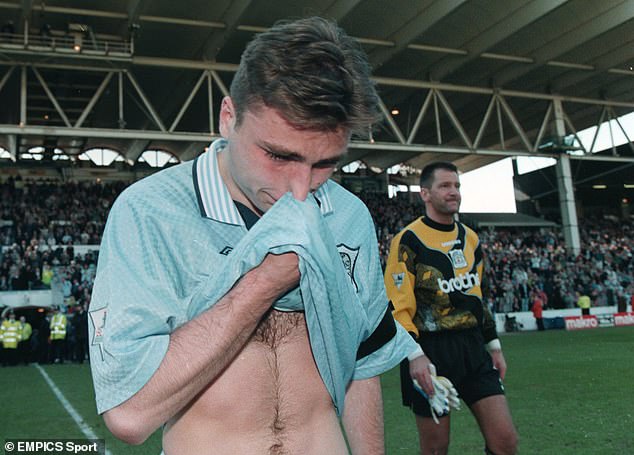 ‘It’s fair to say I don’t have good memories of last-day scenarios,’ Lomas reflected on the game. ‘The situation with City was just one of those things. Alan Ball, God rest his soul, told us a draw was enough to keep us up.

‘If it wasn’t so serious there was great comic value in seeing big Niall running half-dressed down the touchline to say a draw wasn’t enough. It’s the quickest I had ever seen Niall run!

‘He told us we needed to win so it was just crazy. Alan had received false information because he thought Southampton were losing and I was taking the ball into the corner flag to kill time.’

You couldn’t write it. Spurs had a simple enough task at the climax of the 2005-06 campaign – match Arsenal’s result against Wigan and secure a first place in the Champions League. Easy enough.

Tottenham had been on course to seal that fourth spot for most of the season and looked solid under the leadership of Martin Jol, and they very likely would have got the job done at Upton Park – had it not been for a ‘dodgy lasagne’ eaten by some of the squad the night before. 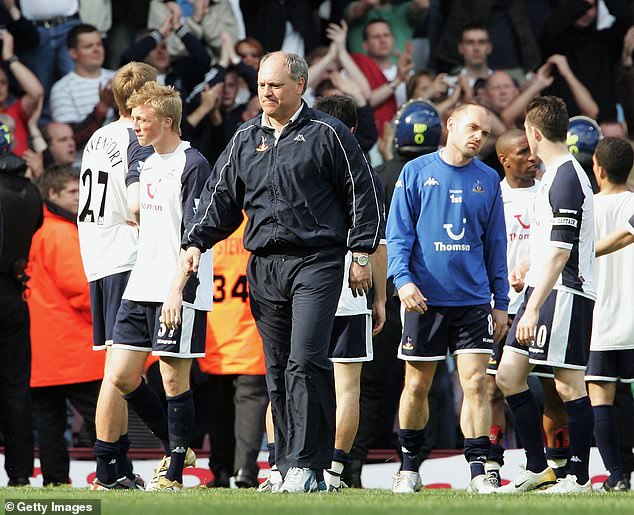 Jermaine Jenas, a member of the squad, told Yahoo: ‘The silly thing is that for a game we would have normally just stayed at home because it was a local derby, but because it was such a crucial game the club put us in a hotel because they wanted us to be together.

‘Lasagne and spaghetti bolognese were on the menu, we ate, and then in the middle of the night we started dropping like flies. It was mayhem.’

Jol said only four players weren’t affected by the sickness – Paul Robinson, Stephen Kelly, Anthony Gardner and Jermain Defoe. Spurs tried to get the game postponed but their request was rejected and played on. 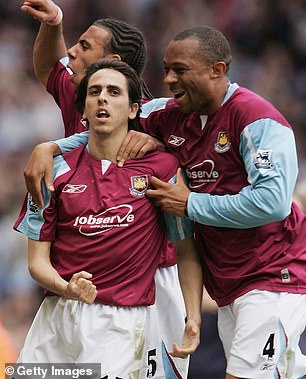 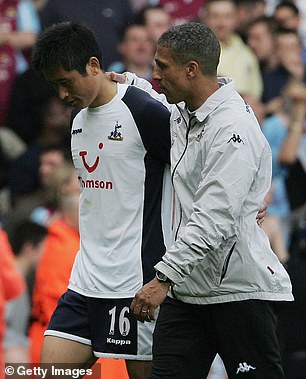 To their credit, Tottenham managed to stay in the game even after Carl Fletcher’s long range strike went in on the ten minute mark. Defoe drew Spurs level to give them hope, but they still needed another goal with Arsenal comfortably beating Wigan 4-2 in their final game at the Emirates.

Sven Goran Eriksson’s fate at City was effectively sealed as his side were dismantled at the Riverside in a shocking result in 2007-08.

The Sky Blues had qualified for the UEFA Cup via the fair play rankings, but that meant little to the club’s board after this embarrassing scoreline.

City travelled to Middlesbrough on the final day with nothing at stake for either team, and no one could have predicted the carnage that would follow. Getting hammered is never ideal – when it happens on the final day it sits with you all summer. 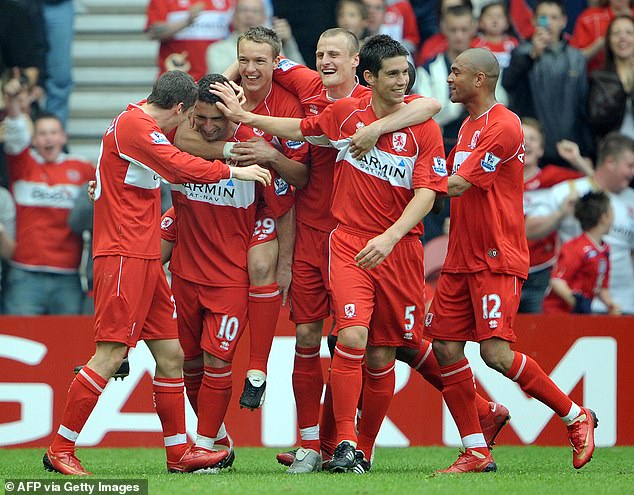 Richard Dunne set the ball rolling by getting sent off after just 15 minutes for fouling Tuncay in the box, with Stewart Downing slotting the resulting penalty.

Then the floodgates opened. Downing and Alfonso Alves grabbed braces while Adam Johnson, Fabio Rochemback and Jeremie Aliadere also got on the scoresheet to rack up an 7-0 lead. Elano salvaged the smallest of consolation prizes before Alves secured his hat-trick in stoppage time.

‘It is difficult to take whenever you lose. But, when you lose like this, it is awful,’ Eriksson said after the game. 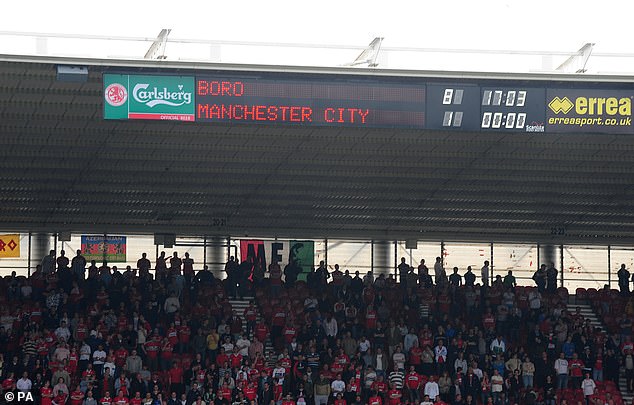 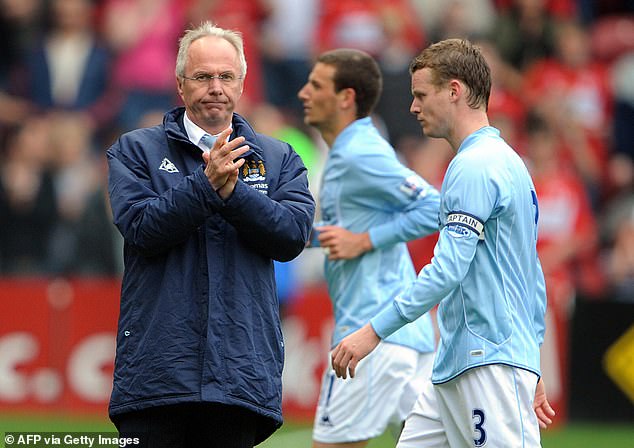 ‘To concede a penalty and have Richard Dunne sent off was a bad start but we were in the game until it was 3-0.

‘After that, mentally we had nothing left. We were not even on the pitch – the team had totally gone and it was embarrassing for everyone.’

Eriksson’s future was already up in the air, and he was let go by chairman Thaksin Shinawatra a month later.

Not the send-off Sir Alex Ferguson was dreaming of. The Red Devils travelled to the Hawthorns with the Premier League title in the bag and the only job left to do was send the veteran manager on his way happy.

Sir Alex was retiring after 26 years and his team looked to be giving him the perfect farewell. In the Scot’s 1,500th game, United made the perfect start through goals from Shinji Kagawa, a Jonas Olsson own goal and Alexander Buttner.

The Baggies hit back as James Morrison and Romelu Lukaku reducted the deficit to just one goal, but Robin van Persie and Javier Hernandez seemingly put the game beyond doubt at 5-2. 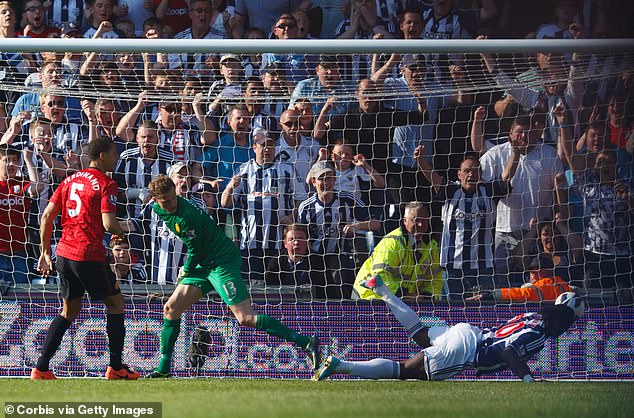 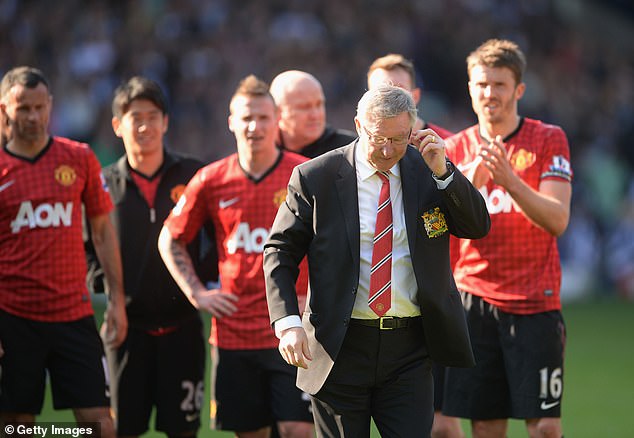 Steve Clarkes’ men, however, had other ideas. Future United star Lukaku was the thorn in their side as he netted West Brom’s third, before Youssef Mulumbu brought it back to 5-4.

Incredibly, the home side clawed themselves level as Mulumba knocked a cross down to Lukaku – who scruffily bundled home in crazy scenes.

Sir Alex looked far from impressed, although at least his farewell will go down in memory for being one of the highest scoring games in Premier League history.

Another swansong for a club great that didn’t go as planned. Steven Gerrard’s last game for Liverpool was a thumping at the Britannia.

Brendan Rodgers men already had no chance to win a top four spot off Manchester United but were hoping to at least salvage fifth place with a victory over Stoke.

But the Reds fell to pieces and ended up going into the break FIVE goals down after Mame Biram Diouf’s brace Jon Walters’ strike put the Potters 3-0 up in eight first half minutes. Charlie Adam and Steven Nzonzi added to the humbling, leaving the travelling fans wishing they had stayed at home. 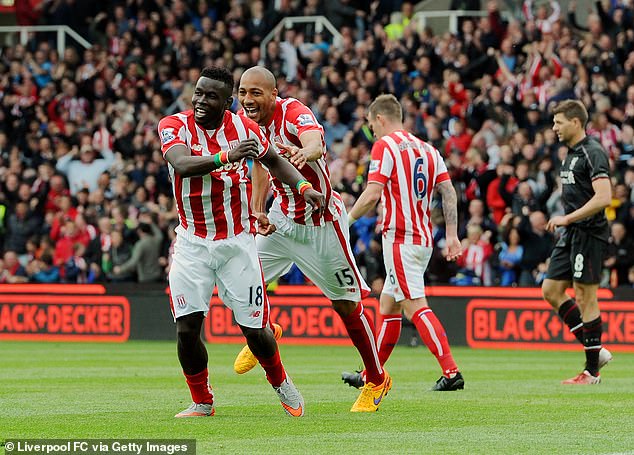 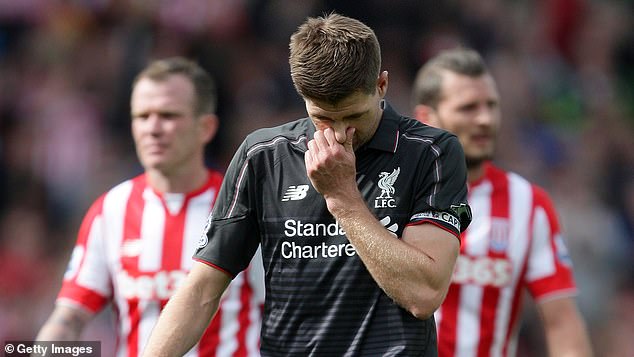 Gerrard had the consolation of at least scoring on his final match, but Stoke had the last laugh as Peter Crouch nodded in a sixth – heaping pressure on Rodgers the season after his team capitulated in the title race.

‘I have always said if the owners want me to go I will go,’ the former Liverpool boss said after the game. ‘But I still feel I have a lot of offer here. There is a lot that’s happened there this year that has made the job tough.

‘Performances like today don’t help me and I’m fully aware of that.’

The club would end up waiting until October before dismissing him, but this crushing defeat was undoubtably one of the last straws. 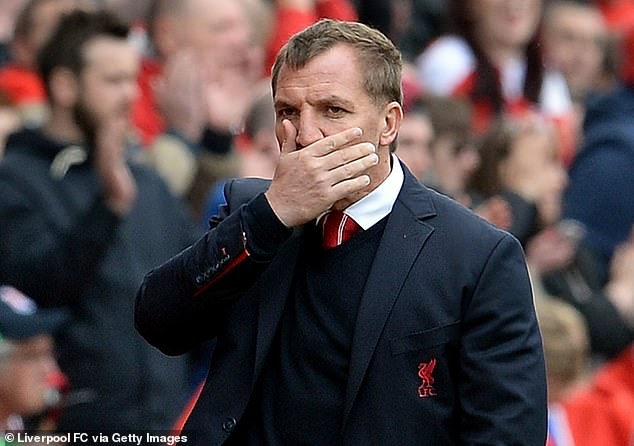 Marco Silva’s side were already down on the final day of the day but still had the chance to put on a strong display for their home faithful and offer some optimism ahead of their season in the Championship.

But Hull ran into a player called Harry Kane and went down with a whimper in one of the biggest home defeats in Premier League history.

The England star had just scored four at Leicester and was determined to finish the campaign with the golden boot. He wasted no time getting started – finding the net twice in three minutes before Dele Alli struck on the stroke of half time. 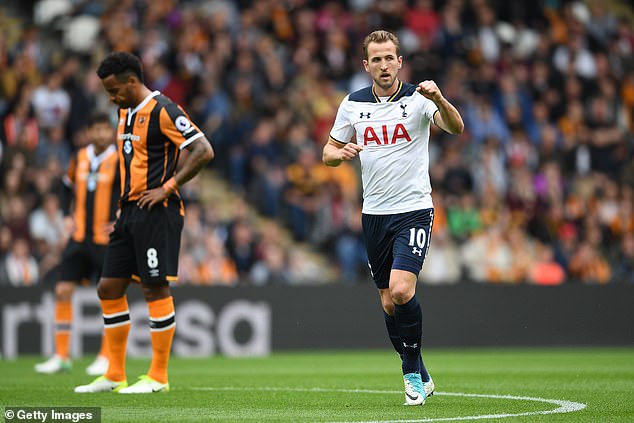 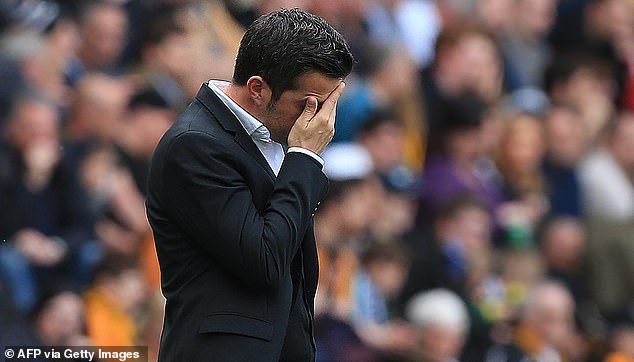 Having already lost the title to Chelsea, the shackles were off Spurs and they weren’t satisfied to leave it there.

Ben Davies grabbed his first league goal for the club and there was even time for Toby Alderweireld to add number seven. Certainly an eye-catching score on the final day of the season.