Spring arrived in November as mild weather with insects active and flowers blooming months ahead of schedule, charity says

This year’s spring arrived much earlier than usual, in November last year, according to wide-ranging nature sightings from the public.

Insects were active and flowers blooming months ahead of schedule, the Woodland Trust’s Nature’s Calendar scheme, has revealed.

But the early spring, which was prompted by mild weather in the last two months, could also come to a sudden halt as a cold snap sweeps in.

Snowdrops blooming ahead of schedule are among the signs of an early spring. Christmas Day butterflies and Boxing Day bumblebees that were also spotted.  (Ben Birchall/PA)

The Woodland Trust’s ‘Nature’s Calendar’ scheme which asks the public to track the seasons through nature observations, has received more than 64 records of early spring activity from November.

A red admiral was seen on December 17 in Cambridgeshire, five months ahead of the May 7 average date the butterfly emerges, the trust said.

Other sightings include 24 records of snowdrops flowering around the country more than a month earlier than normal, the earliest of which was in Southampton on November 30.

Though hazel trees usually flower in early March, there have been 23 hazel flowering records, with the first on December 1.

An oxeye daisy, which normally blooms from mid-April to early June, was seen flowering in Gloucestershire on December 28.

Even birds are ahead of the times: song thrushes have been heard in 11 places since December 5, and are increasingly being reported singing all winter, even though they are expected to start their chorus in March.

Blue tits were also spotted checking out a nesting box on December 26th, several months ahead of their usual nesting times. 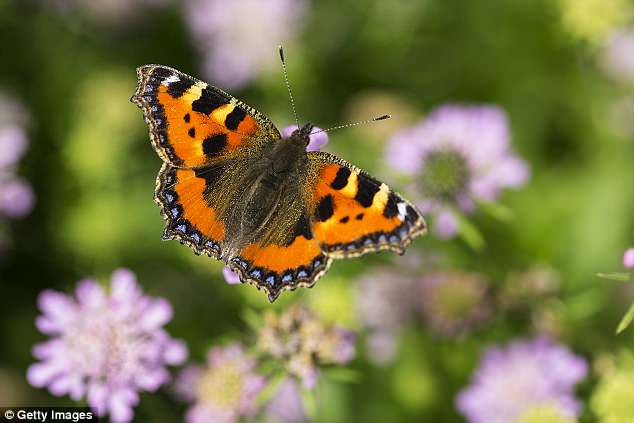 Insects were active and flowers blooming months ahead of schedule, the Woodland Trust’s Nature’s Calendar scheme that asks the public to send in nature sightings, has revealed. But the early spring could also come to a sudden halt as a cold snap sweeps in.

The UK has seen a relatively mild winter so far, with average temperatures 1.1°C (1.98°F) above the long-term average in November and 1.9°C (3.42°F) higher in December, according to the Met Office.

But spring may be halted in its tracks and delicate species could suffer a warning of a dip in temperatures is announced this week.

Frost, ice and even snow, and cold weather could arrive later in the week and stick around for some time.

Kate Lewthwaite, citizen science manager for the Woodland Trust, said: ‘Once again – despite being in the throes of January – flora and fauna are reacting to milder climates, and spring seems to have sprung early.

‘Data like this has continuously brought into question the way we think about the seasons, and to see spring in December no longer seems unusual.’

Dr Lewthwaite added: ‘The more data we have, the better we will understand the effects of warm winters, cold snaps and heatwaves. In short, we need more Nature’s Calendar recorders.’