Stabbing victim, 37, dies from his injuries after Soho attack

A teenager has become Britain’s fifth knife murder victim in just one week after being stabbed near a tube station in West London.

The man in his late teens was found with stab wounds to his chest on Lanfrey Place, West Kensington, shortly after 2pm on Thursday.

Emergency services including London’s Air Ambulance arrived at the scene and took the boy to hospital but he died a short time later.

It comes after a 37-year-old man who was stabbed in Soho early on Sunday morning was pronounced dead last night.

Police search a drain near to Lanfrey Place, West Kensington, London, where a teenager was stabbed and later died in hospital 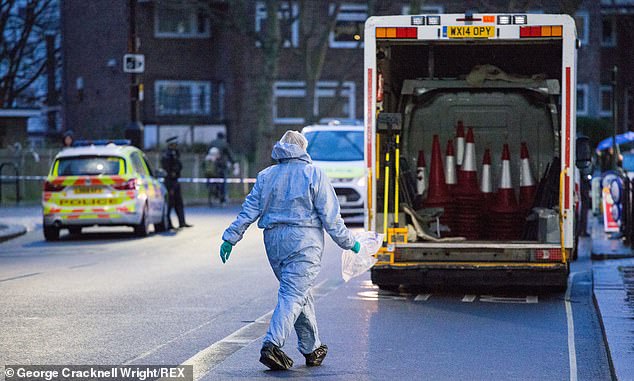 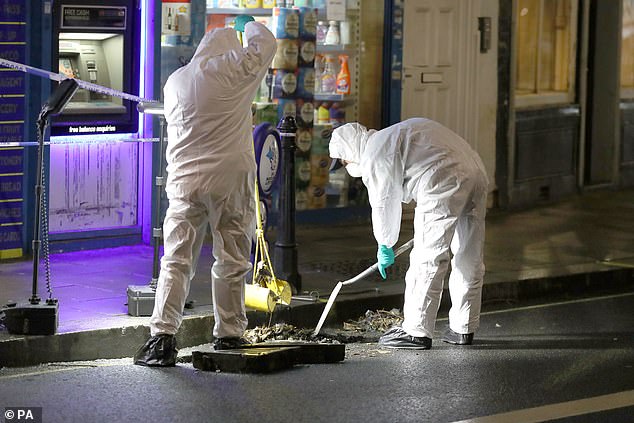 Police search a drain near to Lanfrey Place, West Kensington, London, where a teenager was stabbed on Thursday 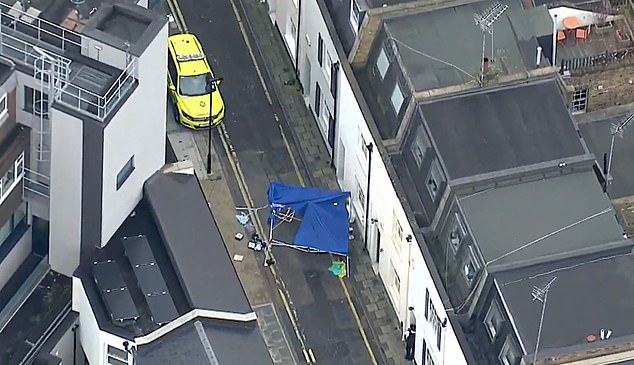 No arrests have been made after the West London stabbing today, close to West Kensington Underground station.

Tonight forensic experts were seen searching the drains as they examine the crime scene.

Yousef Bahadory, who owns a dry cleaners close to the scene, said he did not see the stabbing but was alerted to it by a friend who works next to his business.

He said there were about five boys who were around 19 or younger messing around and shouting outside his shop when one of them was pushed into his window, and he asked them to leave.

The group then went into a coffee shop to have something to eat before leaving and it was after this that he was told there had been a stabbing.

‘When everything had finished the guy ran away, I did not see the knife – within a minute he had disappeared,’ he said.

‘The boy was on the floor. There was so much blood. Someone went to get a doctor from the surgery nearby and she was pumping his chest.’

Scotland Yard said: ‘Police investigating a fatal stabbing in Fulham are appealing for witnesses and anyone with information to come forward.

‘A crime scene is in place. Detectives from the Homicide and Major Crime Command have been informed.

‘At this early stage there have been no arrests. Enquiries continue.’ 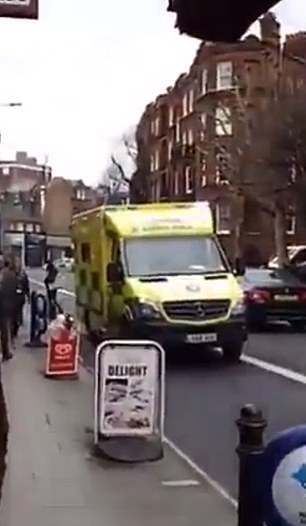 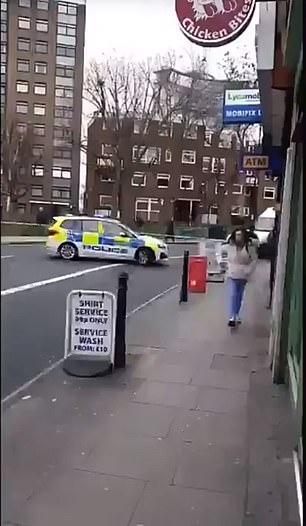 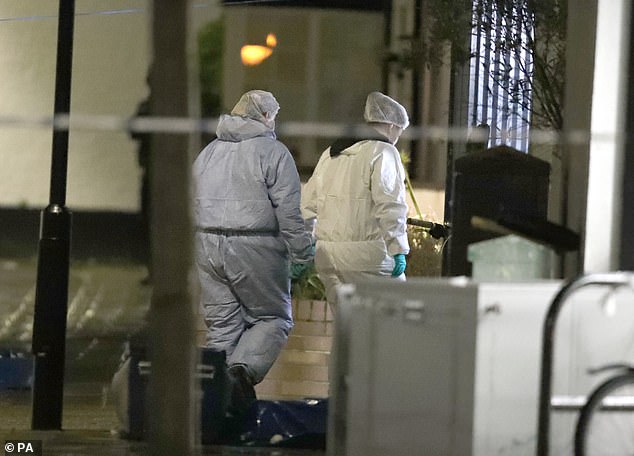 Forensic police on the scene in Lanfrey Place, West Kensington, where a teenager was killed 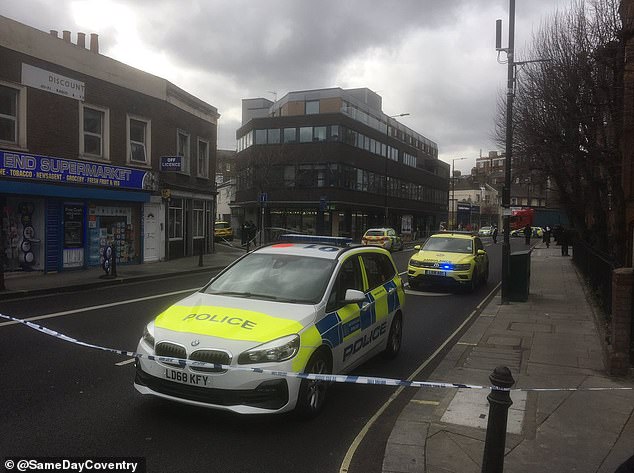 Police at the scene in West Kensington, London after a teenager has died after being stabbed close to the tube station 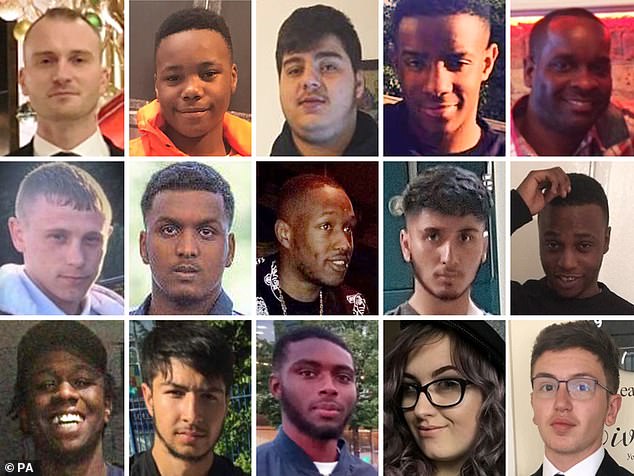 Bloodshed Britain: The 24 murders in London so far this year

January 1: Charlotte Huggins, 33, is believed to have been the first homicide victim in London in 2019. She was stabbed in Camberwell, south-east London, in the early hours of New Year’s Day.

January 1: Later that day, security guard Tudor Simionov, also 33, was stabbed to death at about 5.30am as he tried to prevent gatecrashers storming a private party in Park Lane.

January 4: Simbiso Aretha Moula, 39, was found murdered in her home in Rainham, east London. Her husband, Garikayi Moula, was found hanged. Police were not seeking anyone else in connection with the murder.

January 5: Sarah Ashraf, 35, was found dead in a home in the Isle of Dogs, east London. A 32-year-old man was charged with murder.

January 8: Jaden Moodie, 14, was knocked off a moped and stabbed to death in Leyton, east London.

January 11: Asma Begum, 31, was found with a neck injury in a property City Island Way, Tower Hamlets. A 46-year-old man was charged with murder.

January 27: Kamil Malysz, 34, was found stabbed to death in a shared house in Acton, west London.

January 29: Nedim Bilgin, 17, was the victim of a knife attack in Caledonian Road, Islington, north London.

February 3: A 46-year-old man was found dead at a medical facility in Highgate, north London. A 21-year-old was charged with murder.

February 10: A man, believed to be in his 30s, was found fatally stabbed in East Dulwich, south-east London.

February 18: Bright Akinleye dies after walking into a hotel reception in Camden with stab wounds.

February 21: Glendon Spence, 23, was killed outside a youth club in Brixton, south London. Police have charged two 17-year-olds with murder.

February 22: Kamali Gabbidon-Lynck, 19, was murdered in Wood Green, Haringey. Police said that he and a another man, aged 20, were both found with stab wounds.

February 25: Spaniard David Lopez-Fernandez, 38, was pronounced dead after being found with stab wounds at an address in Globe Road in Tower Hamlets, east London. A 36-year-old man was charged with murder.

February 26: Che Morrison, 20, died after being stabbed to death outside Ilford station in east London.

March 1: Girl scout Jodie Chesney, 17, was stabbed to death in a Romford park.

March 2: A 50-year-old was found dead with fatal knife injuries at a property in Hendon, north-west London. A 54-year-old man was arrested at the scene.

March 2: A baby girl, aged three months, was found dead at a residential address in Croydon. A 40-year-old woman has been charged with murder.

March 6: Laureline Garcia-Bertaux, 34, was found buried in a shallow grave near her home in Kew.

March 7: A teenager was fatally stabbed in the chest near West Kensington Underground station.

Scotland Yard also revealed today that a 37-year-old man attacked in Soho on Sunday morning had died of his stab wounds.

He died on Wednesday evening following the attack in Romilly Street in London’s West End at around 6am on Sunday.

Joe Gynane, 34, of no fixed address, has been charged with attempted murder in relation to the attack.

It brings the total to five stabbing victims in London in the space of a week, after teenager Jodie Chesney, Spanish national David Martinez and 50-year-old Elize Stevens were knifed to death in the last seven days.

Girl scout Ms Chesney, 17, was stabbed to death while playing music with friends in a Romford park on Friday night.

Mayor of London Sadiq Khan said he was ‘filled with anger’ and ‘devastated’ by the killing of Ms Chesney.

‘My thoughts are with her loved ones. It fills me with anger that violent criminals are targeting young Londoners with their whole lives before them. I encourage anyone with information to contact the police,’ he said.

On Saturday, 17-year-old Yousef Makki died after a knife attack in the village of Hale Barns, Greater Manchester.

Another 17-year-old has been charged with his murder.

Spanish national David Martinez was stabbed to death after he was chased in Leyton, east London, on Wednesday.

In addition the body of French woman Laureline Garcia-Bertaux, 34, was discovered in a shallow grave near her home in west London late on Wednesday night.

A total of 24 murder probes have now been launched in London this year, including 12 in the last 17 days.

Following the Soho stabbing a murder investigation has now commenced which is being led by Detective Chief Inspector Katherine Goodwin.

A 34-year-old man was charged on Monday, March 4 with two counts of attempted murder, in relation to this incident along with another stabbing on the same day, of a teenager which occurred in University Street, WC1.

The charge for attempted murder willl be subject to a review by the CPS.

A 41-year-old woman who was arrested remains released under investigation.

Later the same morning police were called to a stabbing on University Street in Camden, where a 16-year-old boy was taken to hospital with ‘life-threatening’ injuries.

On Tuesday Che Morrison was knifed after a fight broke out just before 8.50pm. Witnesses said he was ‘slashed in the face’ during the attack.

He was chased into a hair salon by men armed with a firearm, knives and a samurai sword on February 22 and slaughtered in front of children.

A day earlier, a 23-year-old man – Glendon Spence – was stabbed to death in Brixton, south London, at a youth club which had children as young as seven inside.

Due to the spate of violence, Met officers are out in force carrying out a series of stop and searches around the capital today.

The spate of violence has sparked a renewed political focus on knife crime.

Prime Minister Theresa May has faced a backlash after saying there was no connection between surging violent crime and the cuts to police numbers which began when she was Home Secretary. 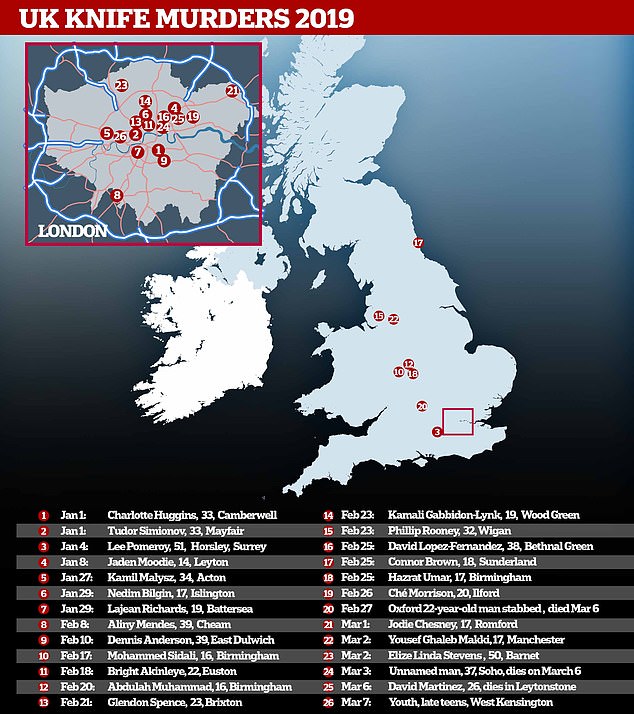 Murder map: The shocking scale of knife deaths in Britain so far in 2019 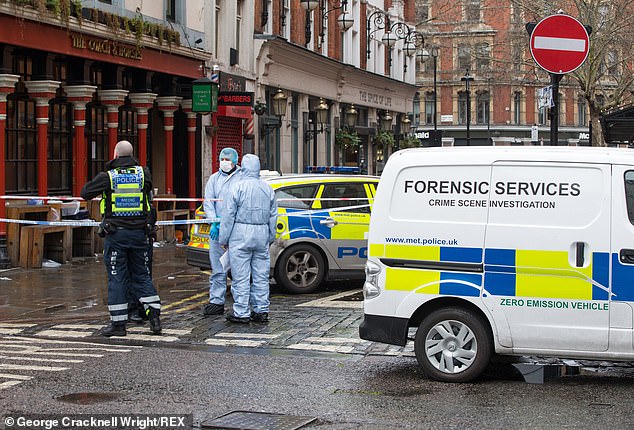 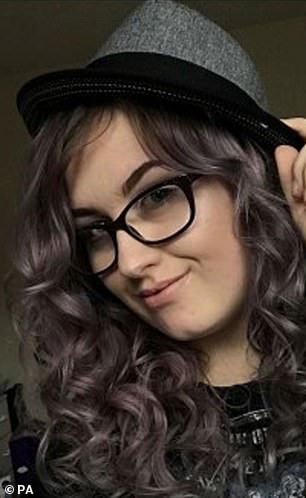 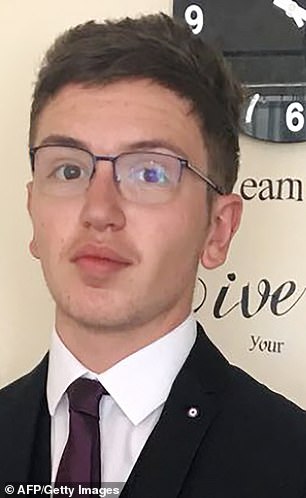 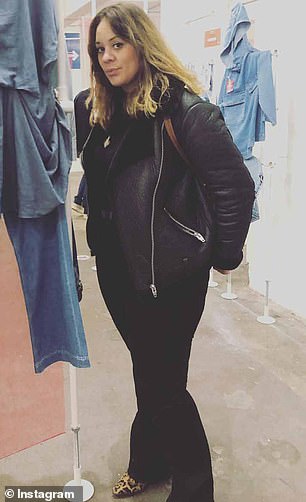 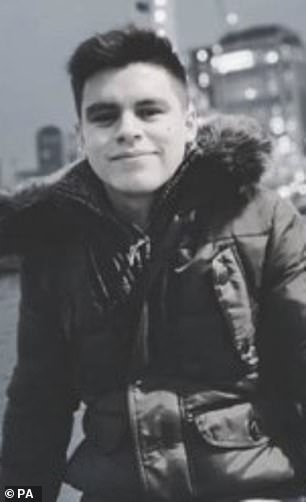