Stay away this weekend! Angry rural dwellers warn visitors not to flood the countryside

Countryside communities are begging Britons to stay away this warm weekend for fear of being swamped by crowds eager to take advantage of the lockdown loosening.

Tomorrow marks the first day much of the nation will have time to enjoy the slackened travel restrictions brought in by Boris Johnson on Wednesday.

Many have already seized upon these freedoms and were today pictured sunbathing and exercising in parks and on beaches.

And climbing temperatures pushing 70F are likely to tempt millions more outdoors this weekend after seven weeks of being cooped-up at home.

But isolated towns and villages dotted around beauty spots, which have largely managed to insulate themselves from coronavirus, are anxious of being breached if a sudden flood of people to rural areas.

A row has already exploded inside one of Devon’s coastal towns after second-home owners flocked to the seaside to use their yachts.

Range Rovers and other luxury cars appeared in Salcombe – dubbed Chelsea-on-Sea – overnight with their vessels in tow, leaving the full-time population of largely elderly residents ‘frightened’ about becoming infected. 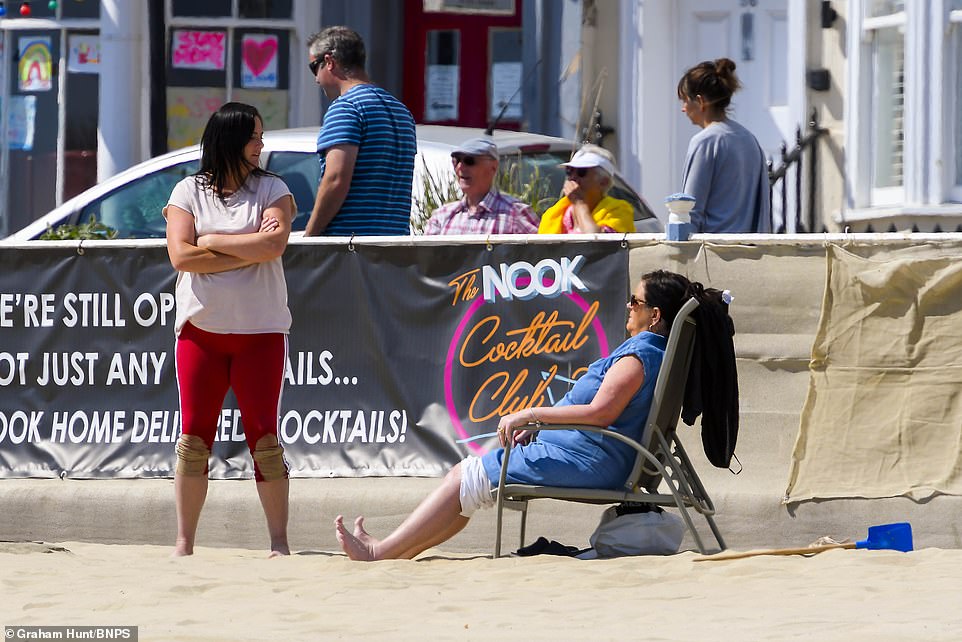 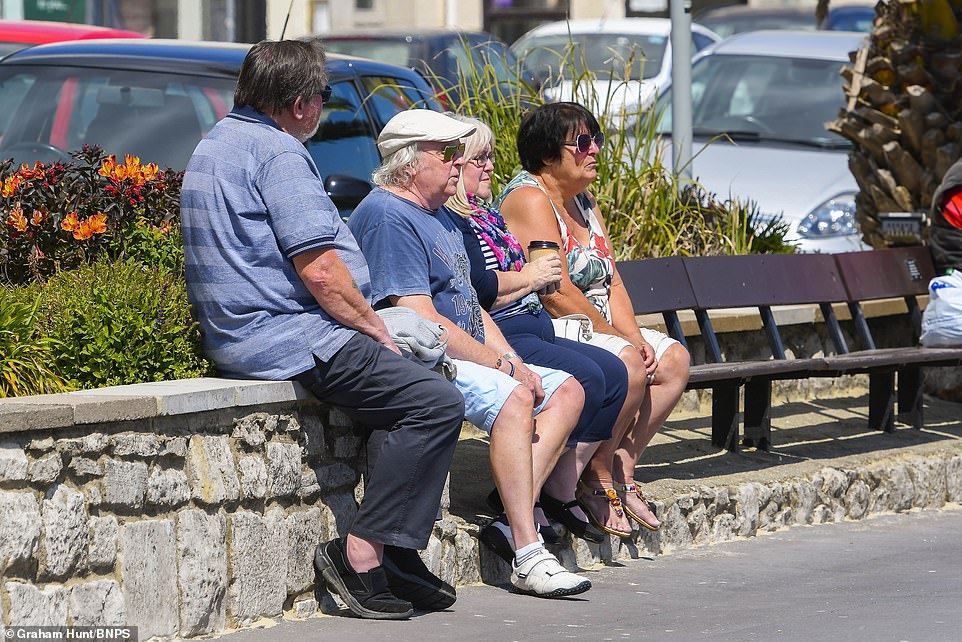 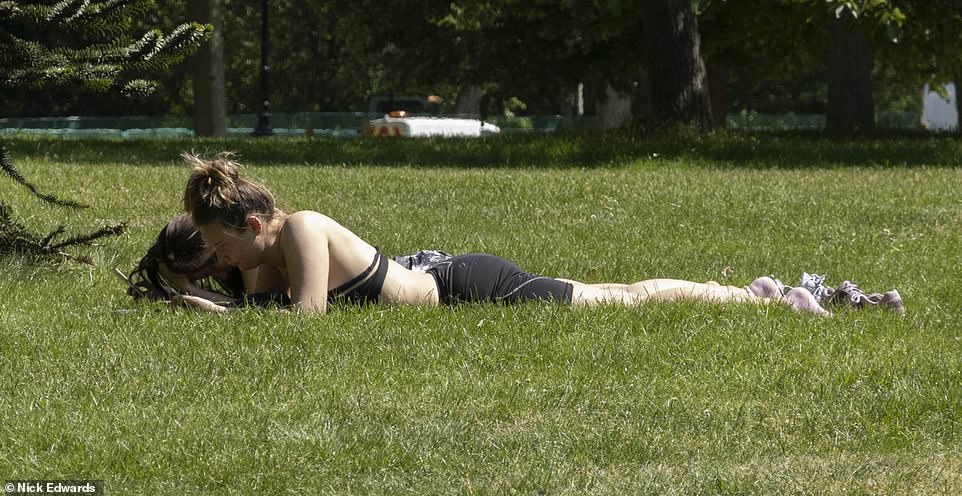 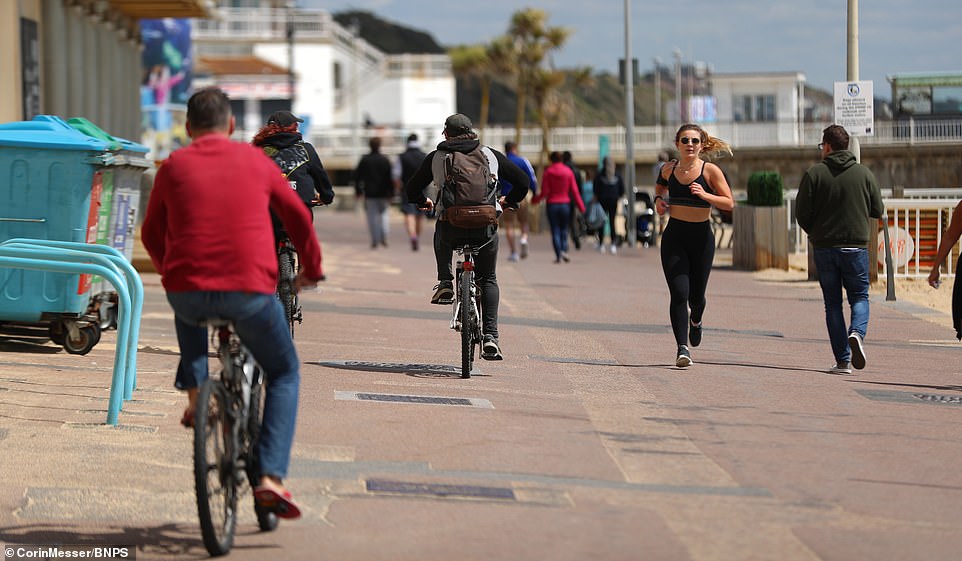 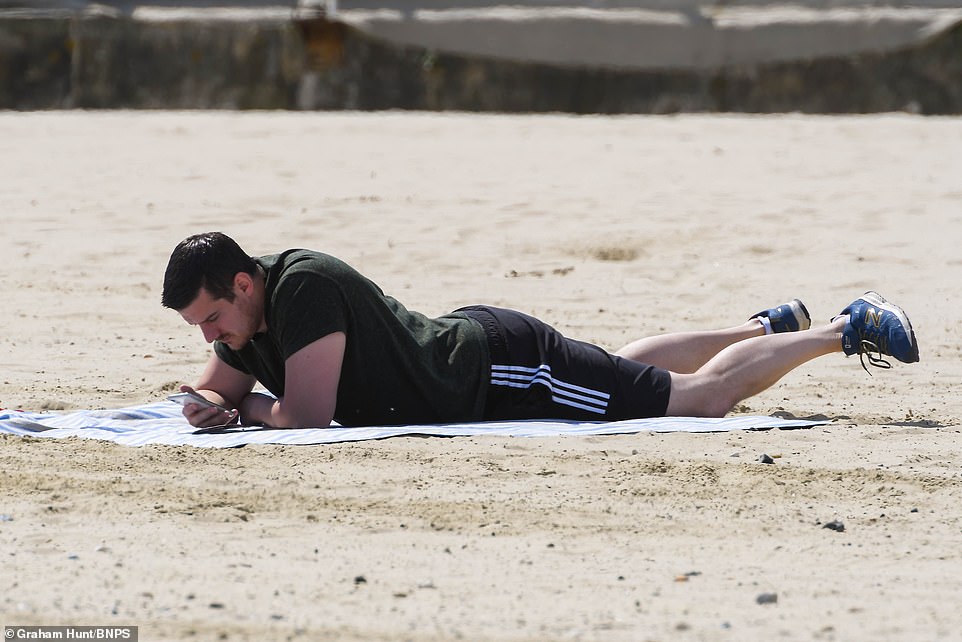 Since Wednesday, Britons have been allowed to sunbathe, leading to people heading to the beach today 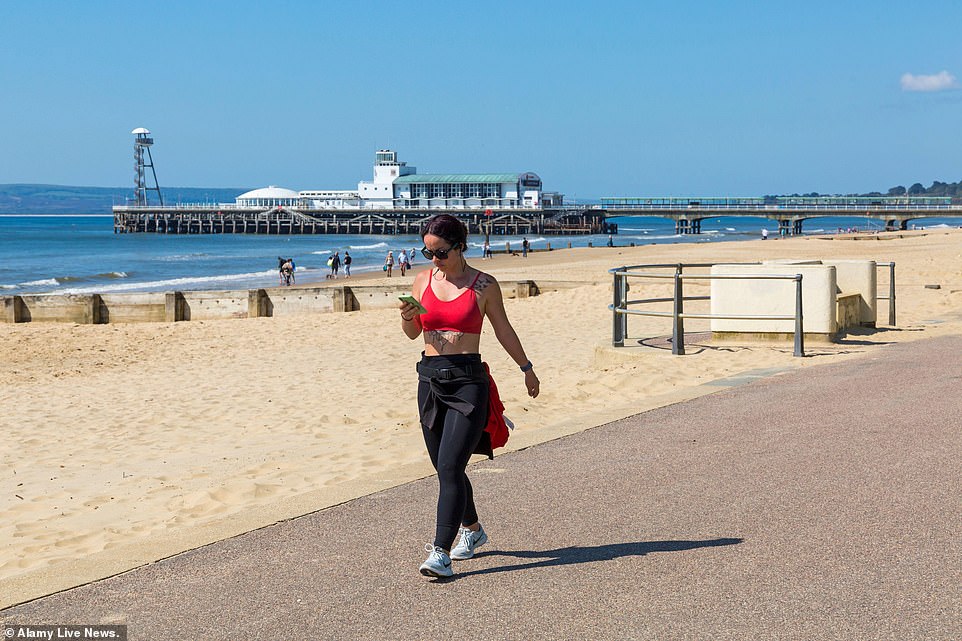 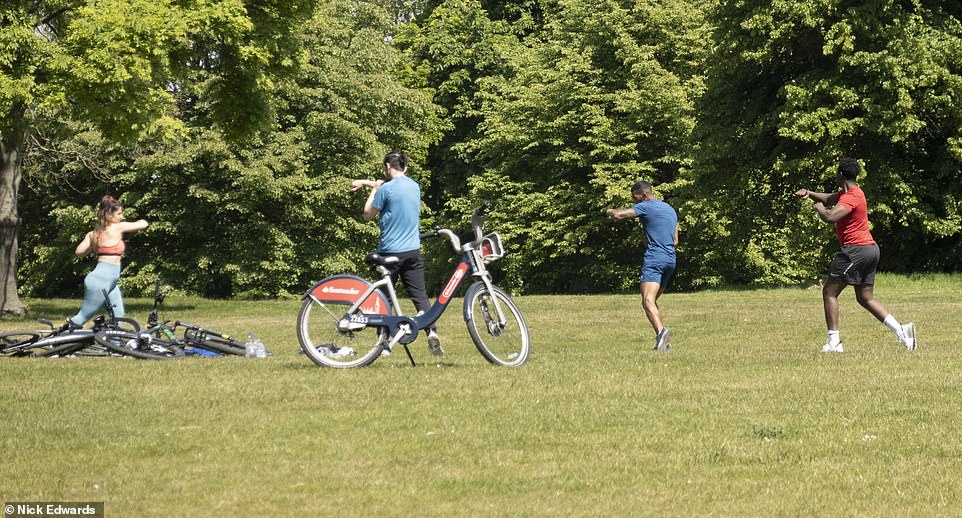 Boris Johnson has allowed people to exercise as often as they like, prompting fitness enthusiasts to head to Hyde Park to work up a sweat 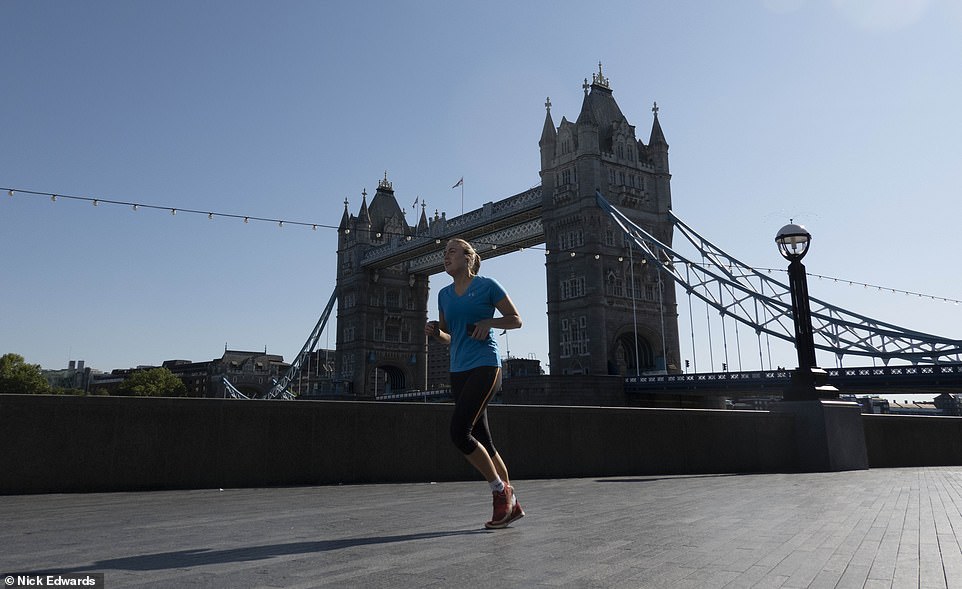 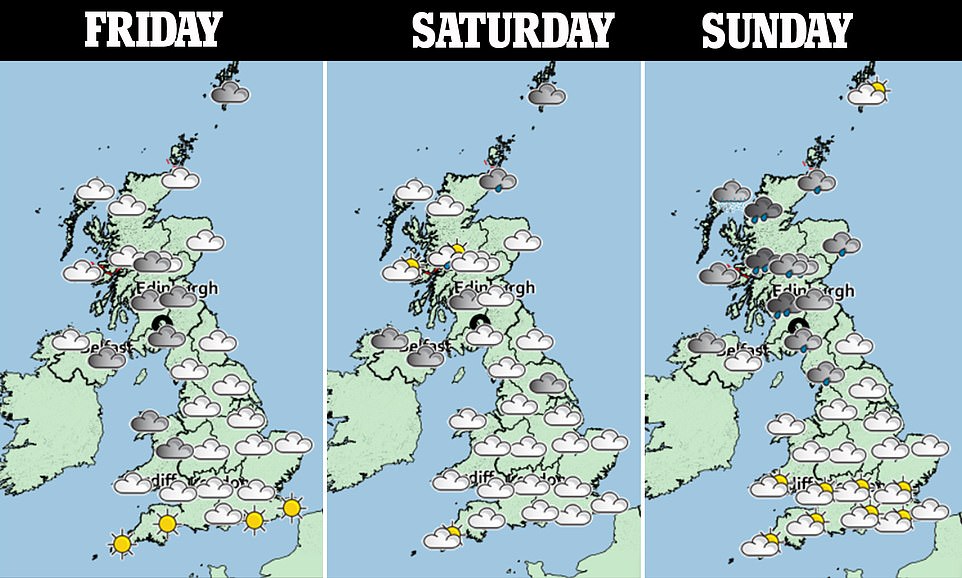 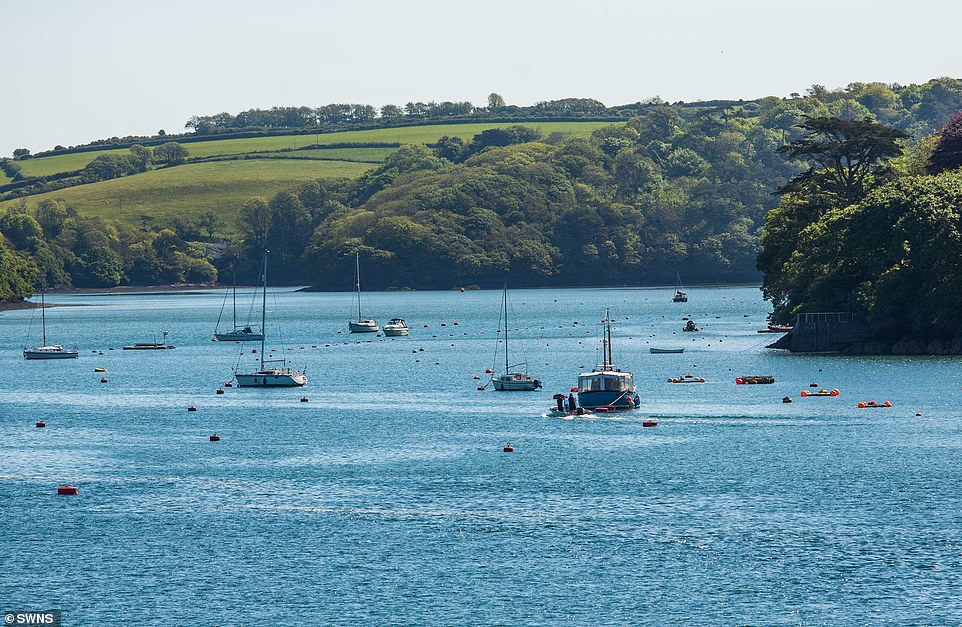 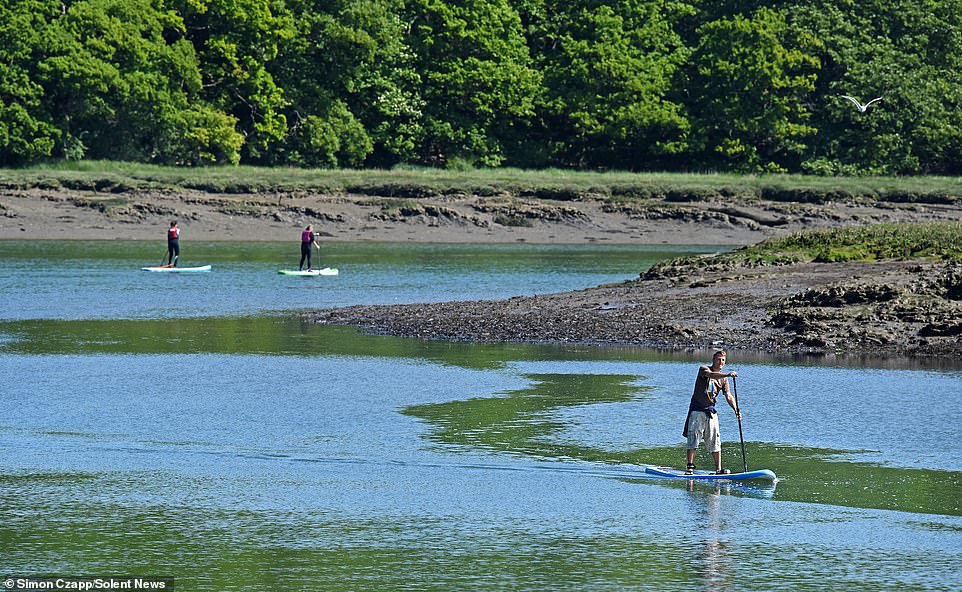 The year-round residents of Salcolmbe have expressed anger at their town being used as a seaside bolthole for the wealthy during the pandemic.

Salcombe town councillor Tony Lang, 69, a window cleaner by trade, said: ‘The rules are quite clear, they’re not supposed to be here.

‘There have been quite a few of them coming down. It’s a bit annoying because we’ve been relatively clear of it down here and the attitude seems to be, ‘what’s the problem, I don’t have it’.

‘But the trouble is no one knows if they have had it. I’m worried that people here may get the virus, there is an increased risk.. If we get people travelling from all over the country it’s a greater risk.’

Several locals described the actions of second home owners as ‘selfish.’ Elsie Hardy said: ‘I can’t believe how selfish some folk are and I also think the police should be given more power to stop all this movement – but their hands are tied by Government rules.’

Hundreds of miles north, the Lake District is also urging would-be tourists to stay away and respect the communities who live there.

Richard Leafe, chief executive of the Lake District National Park, this morning relayed the anxiousness simmering in these communities.

He told BBC Radio 4’s Today: ‘Our message would therefore be don’t rush back to the Lake District. Normally at this time of year in May we could expect around two million people coming to the National Park and obviously if people come in those kind of numbers that’s going to cause real concern in the communities that live and work in Cumbria about an increase in transmission of the disease.

‘Cumbria already has a fairly high incidence of Covid so there’s already real concern on the ground about the amount of people coming back to take their unlimited outdoor exercise, which in itself is a very good thing but if everyone tries to do it in one space, that could lead to problems in the Lake District.’ 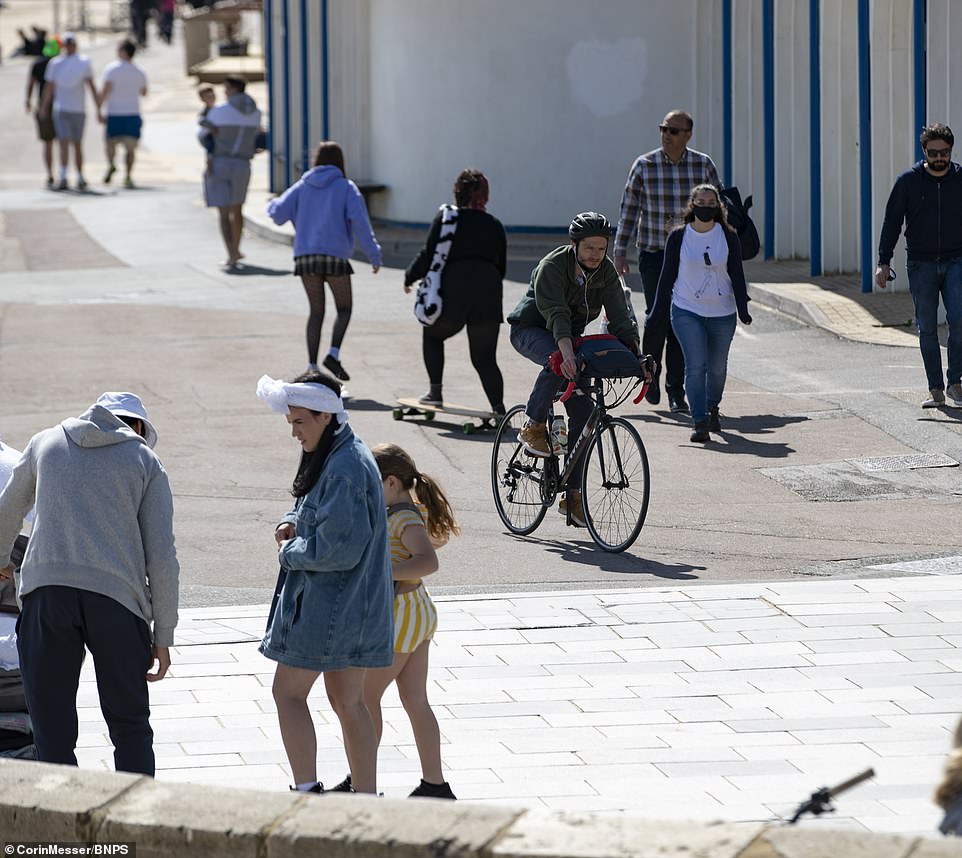 People head to the seafront in Bournemouth, Dorset, as temperatures climb this weekend 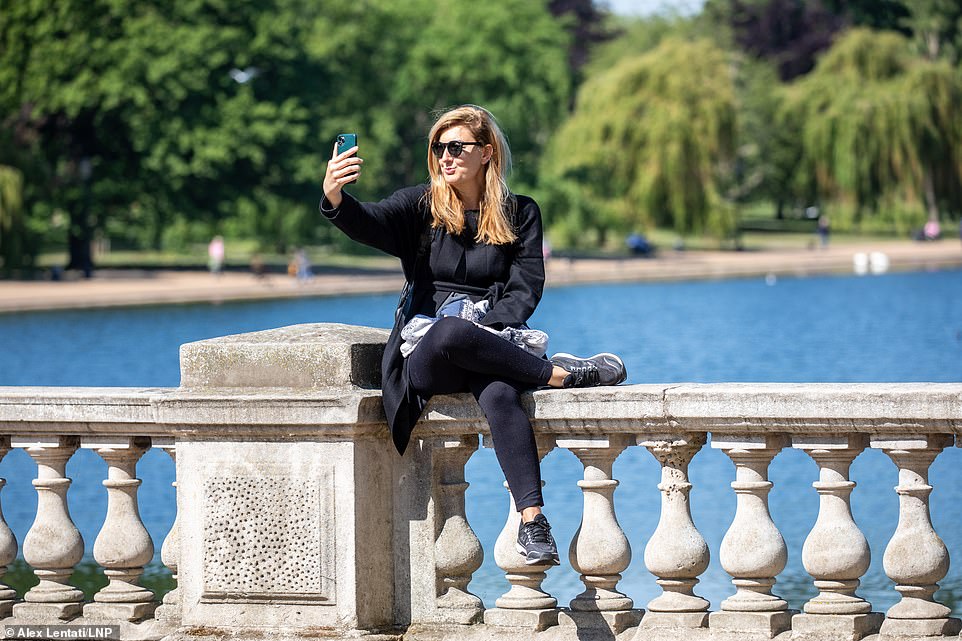 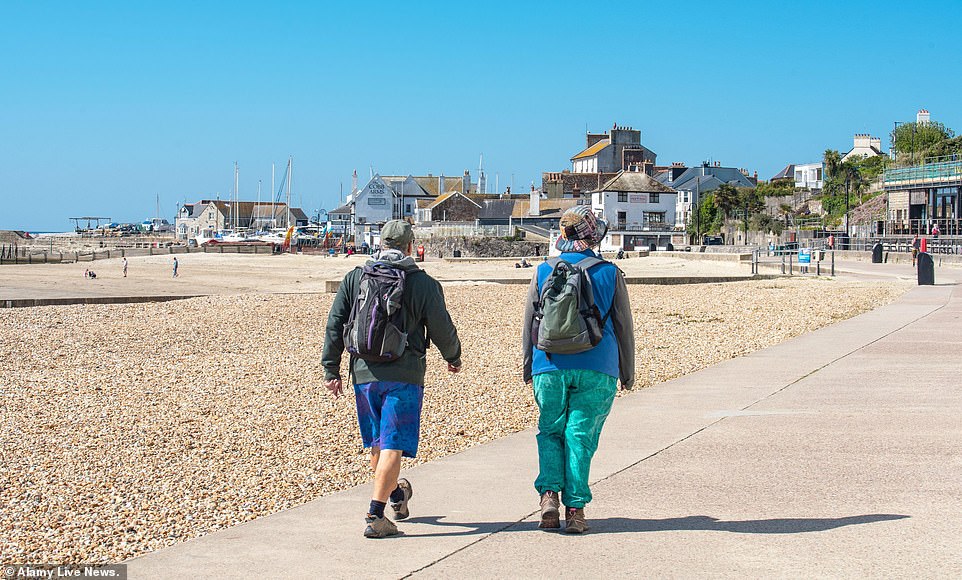 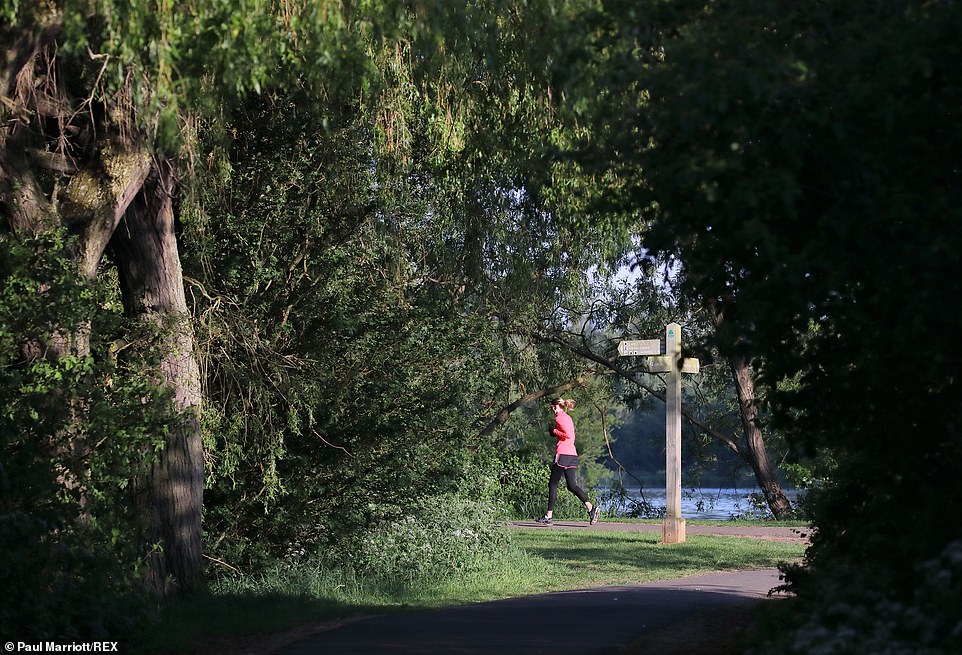 A jogger out for a run this morning, ahead of what could be a warm weekend, as the sun shines at Nene Park, Peterborough 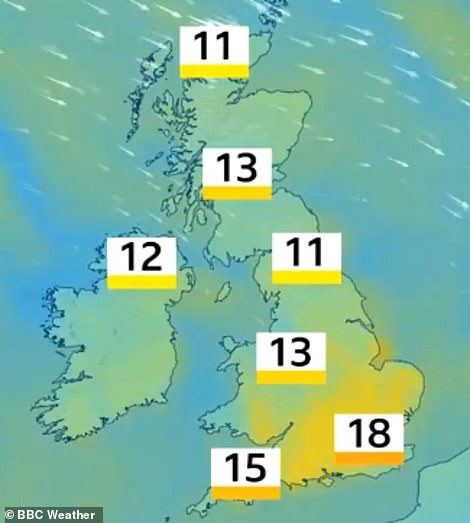 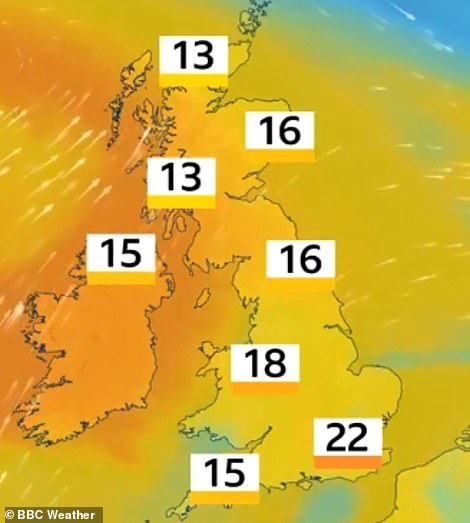 The wind direction is set to pivot which, instead of cold Arctic air, will blow warm tropical breezes towards the UK’s shores (Friday, left and Sunday, right) 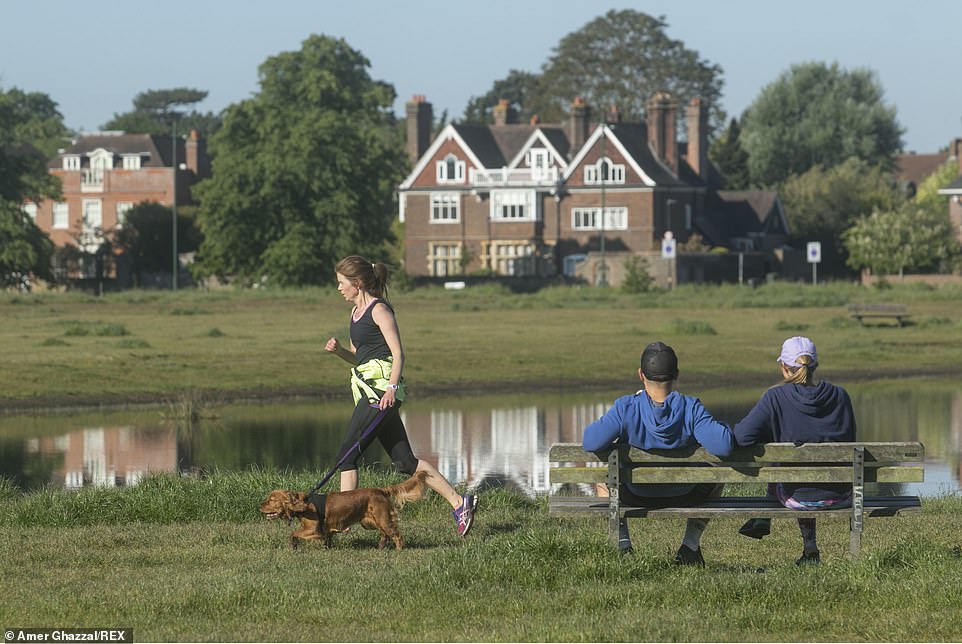 His fears were echoed by National Trust director Hilary McGrady, who urged people to travel to less well-known areas where crowds would be less dense.

Ms McGrady said: ‘This really isn’t the time for people to jump and go somewhere they’re not familiar with. There are a lot of beautiful green spaces close to people within a half hour drive time.

‘But I would absolutely concur this is about respect about people taking care of themselves but care of each other and we’re all trying to do this as safely as possible that of course is our priority for our customers and our staff.

‘Local communities are genuinely and rightly nervous about having large numbers of people arrive.’

While the National Trust’s ticketed estates remain closed, they have opened 350 car parks and are planning more openings as furloughed staff are brought back to work.

Mr Leafe said that National Park staff would be patrolling Lake District car parks this weekend to ensure they were not overflowing.

Communities dotted around these beauty spots are braced for an influx of people as temperatures start to climb heading into next week.

The wind direction is set to pivot which, instead of cold Arctic air, will blow warm tropical breezes towards the UK’s shores.

Those in South East England will enjoy temperatures as warm as Spain’s Costa Blanca on Sunday – and forecasters said the sunny conditions are set to continue in many areas over the next fortnight and may last into June.

The mercury is set to rise next week towards 77F (25C) in London by next Wednesday – closing in on the hottest day of the year so far which was set on Good Friday when Treknow in Cornwall hit 79F (26C).

Matthew Box, from the Met Office, said: ‘Temperatures will have recovered to be mostly near normal. Parts of the south could see temperatures hit 20C (68F) or 21C (70F) in the South-East on Saturday and, more likely, Sunday.’

The forecast for Alicante, on the Costa Blanca, is for showers and temperatures reaching a maximum of 21C on Saturday. Barcelona is only expected to reach 20C (68F). Temperatures will get up to 64F (18C) in London today. 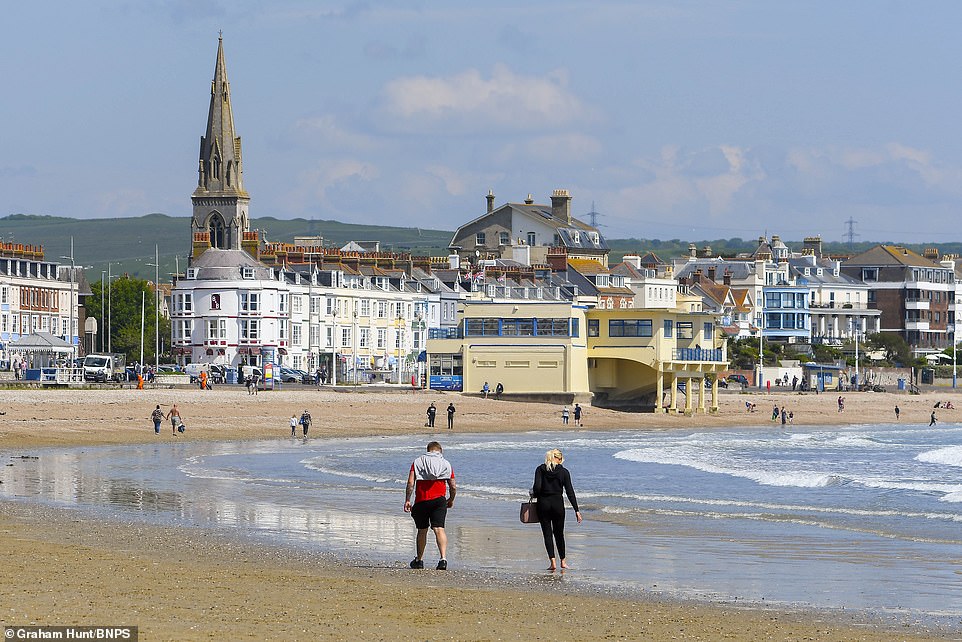 From this morning, people began to head to the seaside resort of Weymouth in Dorset as the weather hotted up 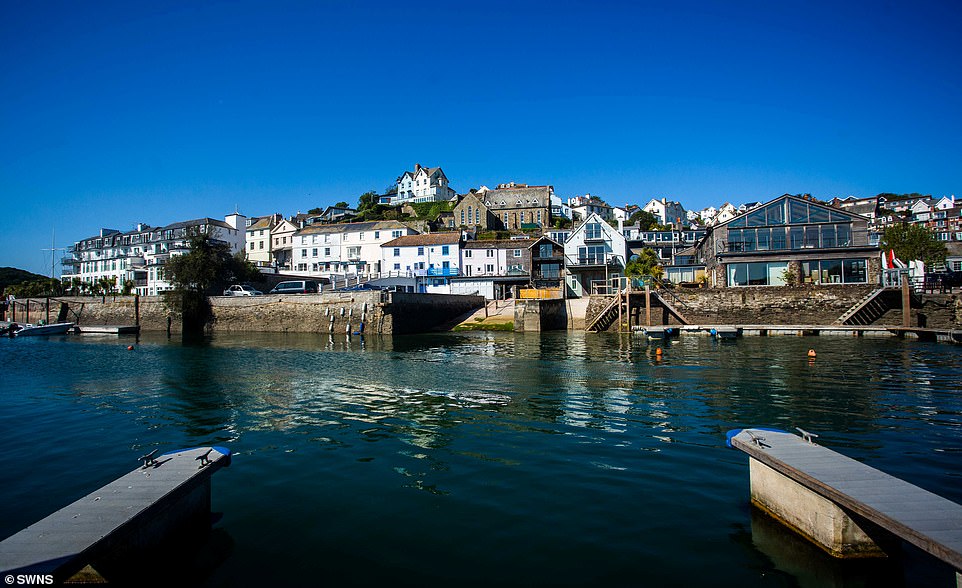 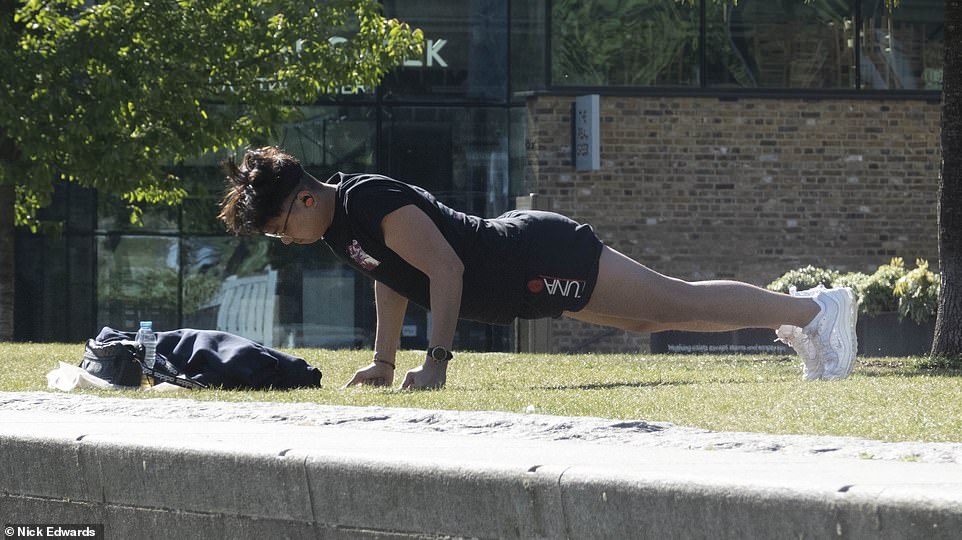 Today will be dry with sunny spells in central and southern England and Wales but cool breezes are set to keep temperatures in the mid-teens Celsius. It is due to be cloudier further north with more limited sunny interludes.

In its longer-range forecast for the next fortnight, the Met Office predicts most parts of the UK will see ‘largely fine and dry conditions, with variable cloud and bright or sunny spells’.

Forecasters say: ‘Temperatures look to take an upward trend over the next two weeks with most areas becoming warm, especially in the south and east.

‘There looks to be a continuation of the settled weather as high pressure stays in control. Most places should remain largely dry with plenty of brightness or sunshine as well as light winds.’

Urging the ‘utmost caution’, Sarah Lee of the Countryside Alliance told MailOnline: ‘There is no doubt we need to work together to restart the rural economy when the time is right and it is safe to do.

‘The countryside thrives when it is open for business. That being said, there are clearly very deep anxieties among many rural communities and as it stands, many feel we are not quite at the stage where we can cope with huge numbers of people travelling from afar, visiting isolated spots.’

Some would-be tourists said they would be steering clear of beauty spots after a flurry of social media posts hinted that they would be targeted by angry locals.

One popular Lake District community group ‘descended into hate’ as people debated if tourists should be allowed or not.

A man commented on the Facebook page: ‘There is going to be a lot of vehicle vandalism. One person wrote: ‘I’m gagging to get up to the Lakes but I won’t be going simply because I’m worried about my car being vandalised by angry locals while I’m up a hill.’

Another posted: ‘This group has got really nasty… what has this virus turned us into? We were planning a trip up when everything has settled down but judging by the comments I do not think we’d be welcome.’