Stomach-churning footage has shown ‘Miss Foot Fixer’ cutting away at a woman’s fungal toenail as it oozes yellow liquid.

The podiatrist used special tools to dig away at all five of her patient’s toenails, which had a fungal infection, at London’s Harley Street Foot and Nail Clinic.

The unnamed woman’s big toenail looked almost beyond repair after she appeared to have let the infection get out of control.

As the hardened yellow nail is chipped away, infected liquid erupts from beneath, where it had been trapped.

Miss Foot Fixer, whose real name is Marion Yau, has more than 41,000 subscribers on YouTube who may find her videos satisfying.

She uploads gruesome footage of the patients she treats, from ingrown nails, removal of calluses and filing of dry skin on the heels.

In this video, Miss Foot Fixer performs one of her common procedures – cleaning and trimming of a fungal infection – which she does every day.

She easily files the fungal nail away on the small toes. But the big toe is more severely affected.

Miss Foot Fixer first uses large clippers to cut the nail off, some of which she will send away to be tested to confirm if the fungal infection is only within the top layer of the nail.

She cuts away as much as nail as possible before using the drill in order to file the stubborn nail down further, while a water jet cleans the residue off.

There is softer infected material under the nail which is easily scraped out using a tool.

Next, thick junk is released from the sides of the toenail, in what viewers described as ‘fascinating’. 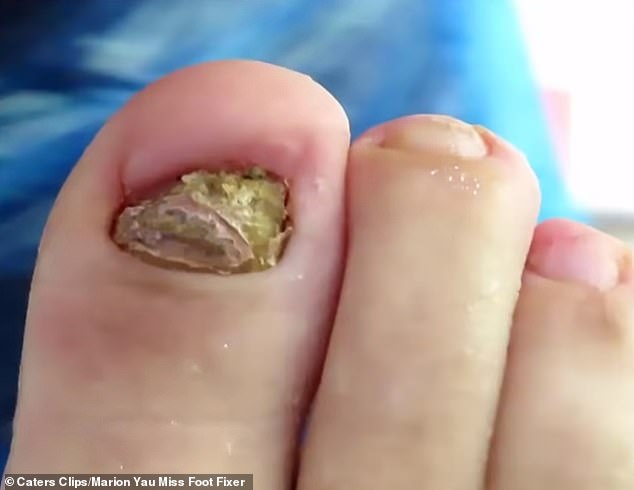 The unnamed woman’s toenails were almost unrecognisable after it appears she let the infection get out of control. Pictured, the big toeneail before treatment 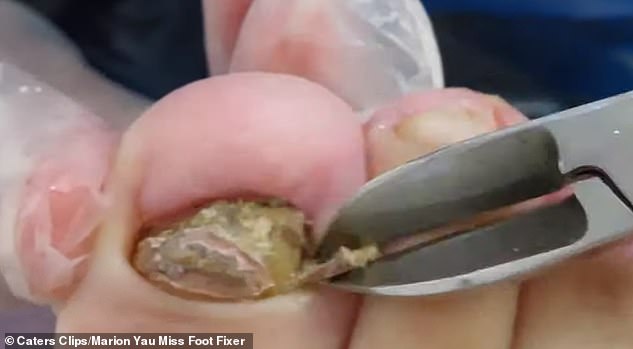 Miss Foot Fixer first uses large clippers to cut the nail off (pictured), some of which she will send away to be tested to confirm how deep the fungal infection is 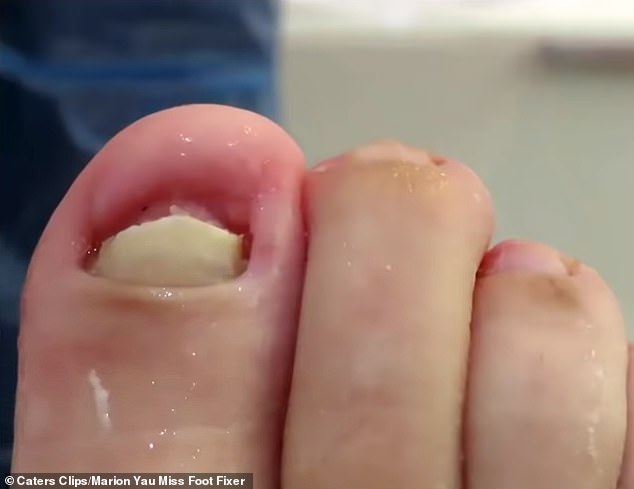 Miss Foot Fixer trims, files and cleans the nail until the fungal infection is cut out (pictured after)

Miss Foot Fixer reassured her patient that they are doing really well in what looks like a painful procedure – although anaesthetic will have been applied before.

Miss Foot Fixer said that the nail is looking better already, but comments that it will get better in time with medication.

‘Fungal infections can affect any part of the body,’ she said.

‘Fungi are normally present in and on the body alongside various bacteria. When a fungus begins to overgrow, you can get an infection.

‘Onychomycosis, also called tinea unguium, is a fungal infection that affects either the fingernails or toenails.’

Onychomycosis affects up to one in four people and, even after treatment, the nail can still grow back infected.

After common over the counter products fail to work, such as topical solutions and oral tablets, a patient may need to regularly see a podiatrist who will use more specialised methods.

HOW ARE FUNGAL NAIL INFECTIONS TREATED?

Treatments applied to the nail don’t work as well as those taken by mouth.  They are most effective if the infection is treated at an early stage.

Alone, they may not be able to clear the deeper parts of an infected nail, though regular removal of abnormal nail material with clippers or filing can help with this.

Used in combination with an antifungal remedy taken by mouth, they increase the chance of a cure.

They may have to be used for a period of four to 12 months before a response is noted. The course of treatment is shorter for fingernail infections.

The cure rate with topical agents alone, is low, approximately 15-30 per cent.

Griseofulvin, which has been used for many years and is the only one of the three medicines licensed for use in children. Long courses of treatment are usually needed (six to nine months for fingernails, and up to 18 months for toenails).

Even so, only about three quarters of infected fingernails and one third of infected toenails will clear up. Relapses are common.

Terbinafineand itraconazole have largely taken over from griseofulvin now. They work better and much more quickly, although only about 50 per cent of nail infections are cured. Terbinafine should be considered as first line treatment for dermatophyte fungi – the ones that cause athlete’s foot. It is taken daily for six weeks for fingernail infections and for 12-16 weeks for toenail infections.

Other treatments include laser treatments and photodynamic therapy which may be helpful but are less effective than the topical and systemic treatments listed above. These treatment options are not currently available on the NHS.

Herbal products are promoted for fungal nail infection, but there is no good evidence that they are safe or more effective than standard treatments.

Sometimes very thick nails that are not likely to respond to tablets alone may have to be removed by surgeons under a local anaesthetic, however this is rarely performed since cure rates are not high enough to justify the discomfort of the surgery.