Stonehenge was ‘dragged into position using LARD’: Massive stones of the 5,000-year-old Wiltshire monument may have been slipped into place using ‘greased sledges’ lubricated with pig fat

Stonehenge’s enormous monoliths may have been dragged into place using ‘greased sledges’ aided with the lubrication of pig fat.

The lard-based method for the construction of the iconic Wiltshire monument is a theory suggested by archaeologists at Newcastle University.

Pig fat residues were found on pottery shards at Durrington Walls, near Stonehenge, which have long been associated with feeding the hundreds of people who helped build the landmark

New analysis has found that the evidence of lard may actually stem from bucket-sized dishes which may have been used for the collection and storage of tallow – a form of animal fat.

Pig fat could have been used to grease the sledges used to transport the massive stones of Stonehenge into position, archaeologists have suggested

Dr Lisa-Marie Shillito, Senior Lecturer in Landscape Archaeology, Newcastle University, said: ‘I was interested in the exceptional level of preservation and high quantities of lipids – or fatty residues – we recovered from the pottery.

‘I wanted to know more about why we see these high quantities of pig fat in pottery, when the animal bones that have been excavated at the site show that many of the pigs were “spit roasted” rather than chopped up as you would expect if they were being cooked in the pots.’

It is now generally accepted that the huge megaliths that make up Stonehenge were moved by human effort, with most theories claiming the rocks came from Preseli Hills in  Wales.

Recent experiments have suggested that the stones – up to 26 feet (eight metres) high and weighing as much as two tonnes – could have been moved by 20 people by placing them on a sled and sliding them over logs.

The pottery at Durrington Walls consists of over 300 shards and have been involved in a range of archaeological studies. 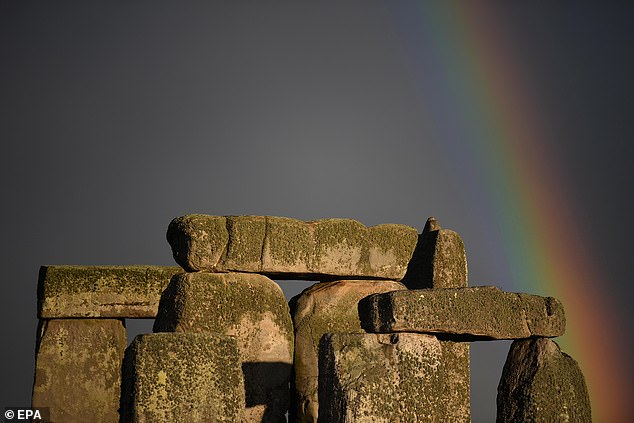 Fat residues on shards of pottery found at Durrington Walls, near Stonehenge, have long been assumed to be connected with feeding the many hundreds of people that came from across Britain to help construct the ancient monument

Analysis of residues of absorbed fat is a widely-used technique which can reveal what foods different type of pottery was used for.

‘There are still many unanswered questions surrounding the construction of Stonehenge’, she says.

‘Until now, there has been a general assumption that the traces of animal fat absorbed by these pieces of pottery were related to the cooking and consumption of food, and this steered initial interpretations in that direction.

‘But there may have been other things going on as well, and these residues could be tantalising evidence of the greased sled theory.

‘Archaeological interpretations of pottery residues can sometimes only give us part of the picture.

‘We need to think about the wider context of what else we know and take a ‘multi-proxy’ approach to identify other possibilities if we hope to get a better understanding.’ 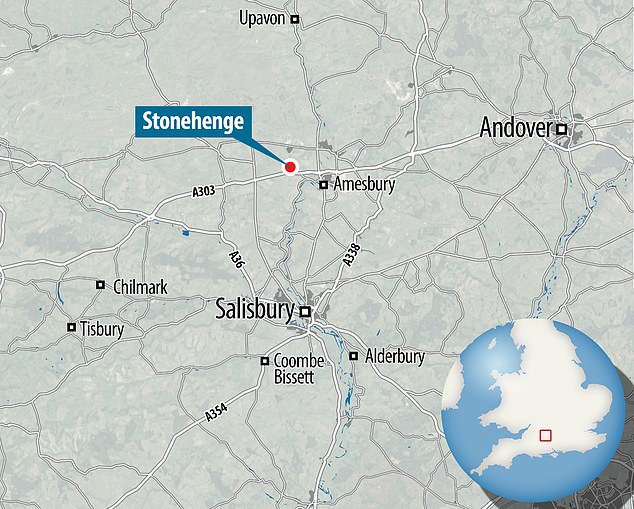 Stonehenge was built thousands of years before machinery was invented.

The heavy rocks weigh upwards of several tonnes each.

Some of the stones are believed to have originated from a quarry in Wales, some 140 miles (225km) away from the Wiltshire monument.

To do this would have required a high degree of ingenuity, and experts believe the ancient engineers used a pulley system over a shifting conveyor-belt of logs.

Historians now think that the ring of stones was built in several different stages, with the first completed around 5,000 years ago by Neolithic Britons who used primitive tools, possibly made from deer antlers.

After the Neolithic Britons – likely natives of the British Isles – started the construction, it was continued centuries later by their descendants.

Over time, the descendants developed a more communal way of life and better tools which helped in the erection of the stones.

Bones, tools and other artefacts found on the site seem to support this hypothesis.