Sheila Gregory, 64, says she was stunned when the allegations emerged that her daughter, whose real name is Stephanie Gregory Clifford, had slept with Donald Trump.

‘It hurts me deeply,’ Gregory told the Dallas News. ‘My friends all say the same thing: ‘I can’t believe that is the same sweet child — you took such good care of her.’ 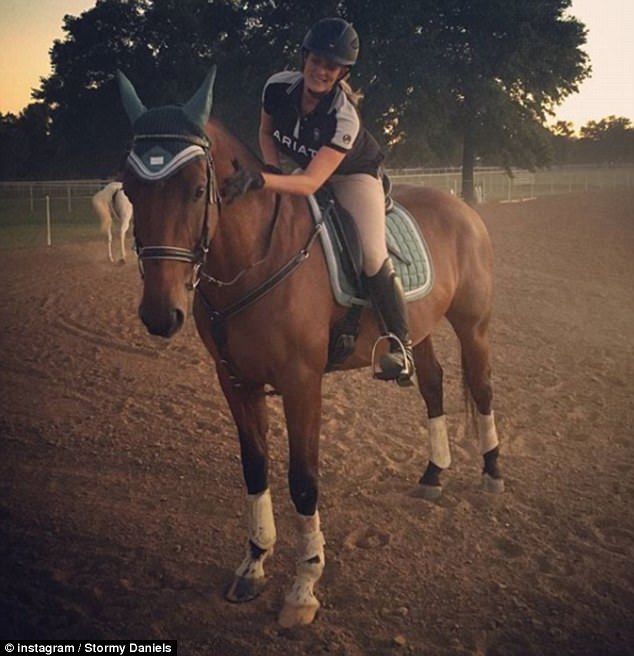 Gregory remembers her daughter from a much more innocent time. When she was a little girl, who loved horse riding

The Trump fan does fear, however, that her daughter’s affair could affect the president.

‘If Mr. Trump runs four more times, I would vote for him every time,’ Sheila Gregory said. ‘I like him. I like the way he handles things. It’s time this country is put back where it belongs — taking care of the people here instead of the people who don’t belong here.’

But Gregory remembers her daughter from a much more innocent time. When she was a little girl, who loved horse riding and dreamed of becoming a vet. Aged ten, her stepfather gave her $500 for Christmas which she spent on a mistreated horse. 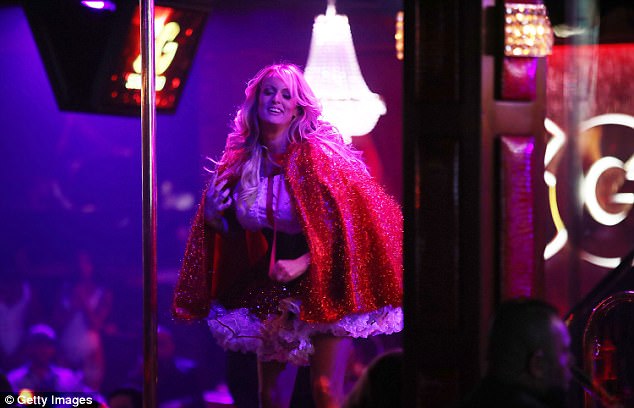 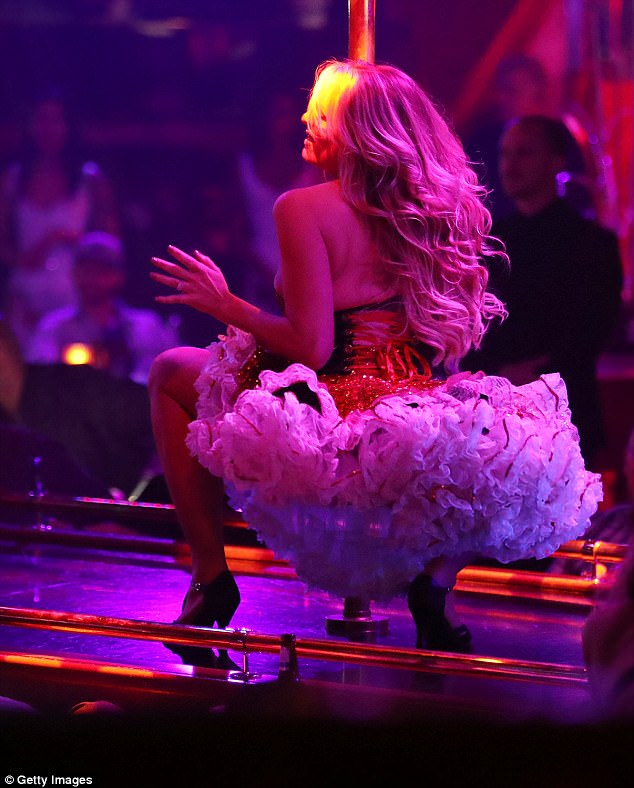 Over the next few years, she spent hours working to rehabilitate the animal until it was able to ride again.

‘I’d give anything to go back to those years,’ her mom said.

‘She made friends easily. She was funny,’ her mother said. ‘But if you made her mad or you hurt her, she just wouldn’t have nothing to do with you anymore.’

Gregory said her daughter was affected by her parents divorce, when she was just 3 or 4 years old, and her dad Bill Gregory, 68, admits he didn’t have much to do with her when she was growing up.

Meanwhile, her mom worked as a trucking company manager to pay for her daughter’s dance and horse-riding lessons.

Gregory said Daniels received multiple offers from colleges, after being a studious kid, but said her daughter changed as soon as she hit her late teens – she felt that something wasn’t right.

At 17, her father found out Daniels was dancing at a strip club in Kentucky. That was the last time he ever saw her. 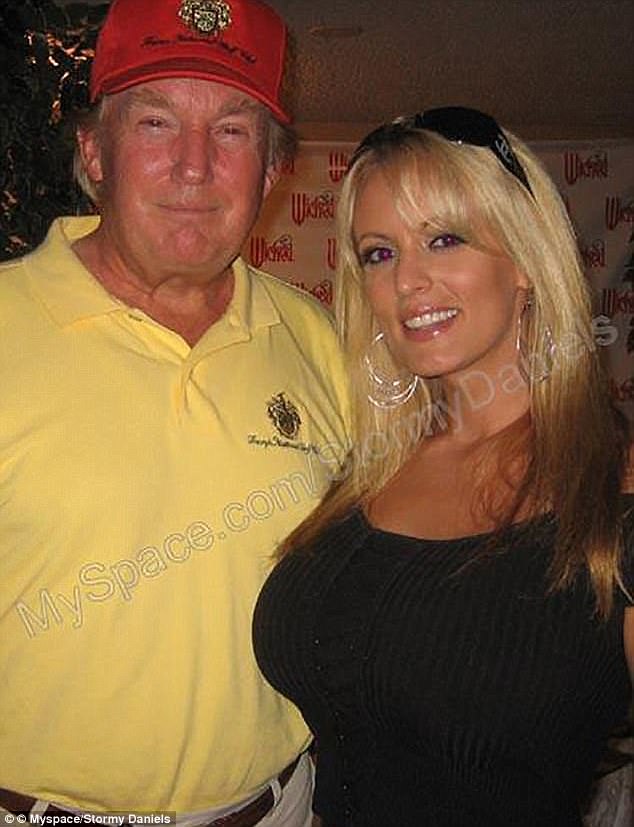 Daniels, pictured with Donald Trump, claims she had an affair with the would-be president

He is also concerned about the effect that the publicity around Daniels’ alleged affair with the president could have.

‘You start rattling the cage of powerful people, and you don’t know what might happen,’ he said. 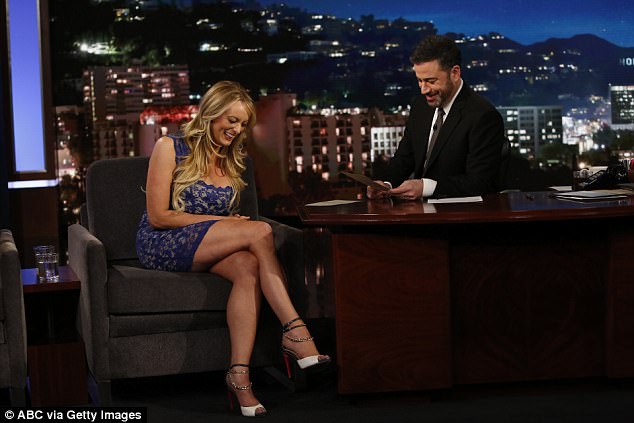 Daniels has been doing the rounds on late night shows, including Jimmy Kimmel Live! in January 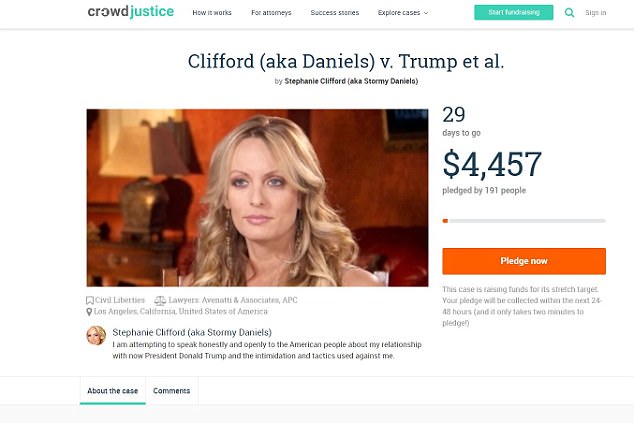 Adult film star Stormy Daniels has launched a crowdfunding site to raise funds for her legal fees, any fines, and security as she seeks to speak ‘openly’ about her alleged affair with President Trump 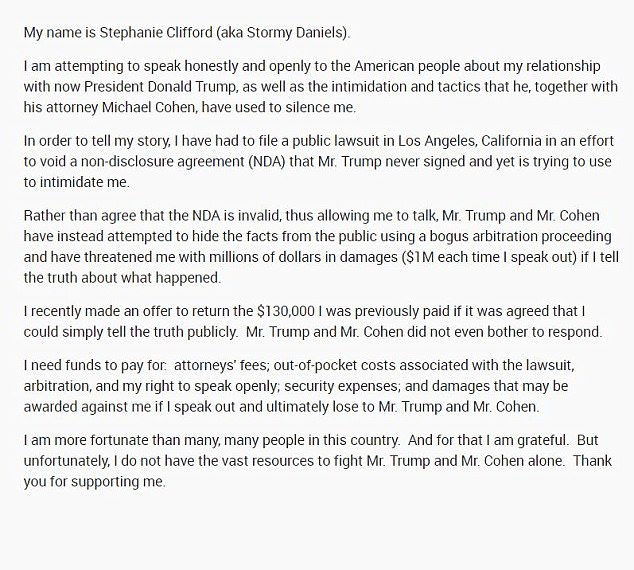 Daniels is seeking funds to pay ‘attorney’s fees, out-of-pocket costs associated with her lawsuit against Trump, security expenses, and damages

‘I wanted to showcase two of my own ‘passions’ at once — eventing with my horse, and making awesome movies,’ Daniels told AVN, a trade publication, last year.

Daniels currently lives with husband, Glendon Miller Crain, in the Dallas suburb of Forney with their daughter.

The actress has sought to invalidate a nondisclosure agreement under which she was paid $130,000 not to give details of her alleged encounters with Trump.

She claims she had an affair with the would-be president in 2006, while he was still married to Melania.

She said Monday that she has offered to repay the money as long as she can speak openly about the situation.

Daniels filed a lawsuit in Los Angeles last week that sought to invalidate the agreement so she could ‘set the record straight.’

The lawsuit claimed the ‘hush agreement’ that was signed days before the 2016 presidential election is legally invalid because it was only signed by Clifford and Cohen and not by Trump.

Daniels launched the site to raise funds so that she could speak about what she calls ‘my relationship’ with Trump and contend with ‘intimidation tactics used against me.’

Although she signed a non-disclosure agreement with Trump lawyer Michael Cohen, her own lawyer is waging a legal and PR strategy to get it lifted.