Stormy Daniels isn’t afraid to show who she really is — and what she really looks like.

The adult film actress, 39, took to Instagram on Wednesday to share a make-up-free selfie, showing off her natural features and blemish-free skin.

She can be seen in the photo sitting by a swimming pool and basking in the sun, her face and head protected by a straw hat.

Daniels, who held the camera slightly above her face to snap the picture, is wearing a string bikini in the photo and gazing straight into the lens.

While she often shares photos of herself wearing a full face of make-up, this is the first bare-faced selfie she has posted in a while.

The actress, who is dipping her feet in the pool in the vacation snap, explained in the caption that was enjoying her last bit of time off before resuming work.

‘Last day of relaxation before it’s back to business,’ she wrote in the caption.

Daniels shared the photo the day after Vogue published an interview of her, which appears in the magazine’s October issue. 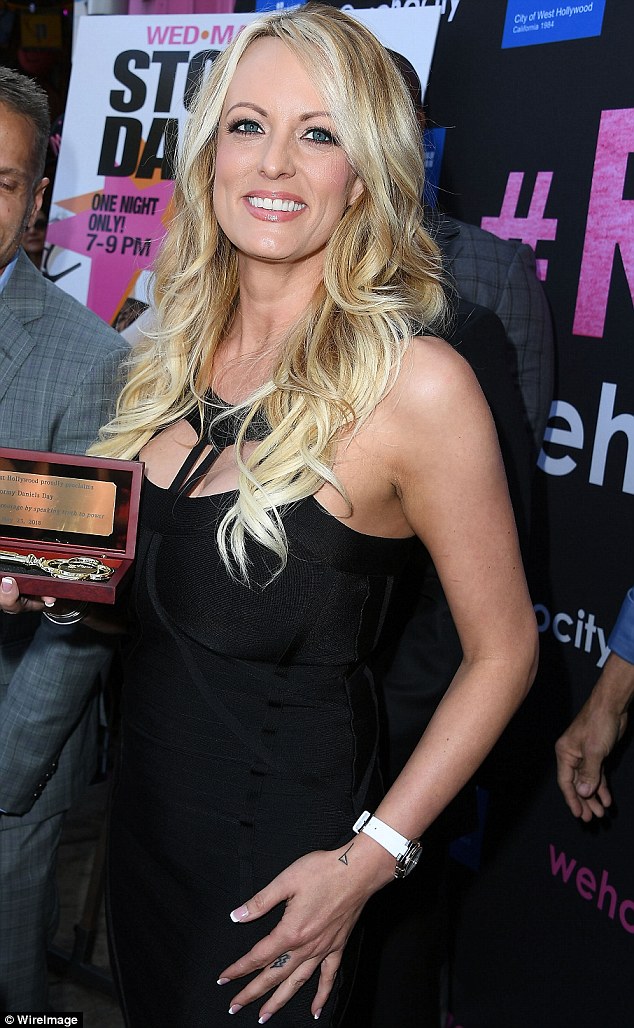 Timing: Daniels (pictured in May) shared her bare-faced selfie the day after Vogue published an interview in which she talks about taking on Donald Trump and Michael Cohen

She talked at length about taking on President Donald Trump and Michael Cohen, who paid her $130,000 to keep her claims about her alleged 2006 encounter with Trump quiet ahead of the 2016 election.

In an accompanying portrait taken by iconic photographer Annie Leibovitz, Daniels posed in a last-season Zac Posen cap mermaid gown that was worth $3,990 but is now being sold online for $850. She wore Tiffany jewels and had her blonde hair curled and placed to one side.

Speaking of her alleged dalliance with Trump at a Lake Tahoe hotel following a golf tournament in 2006, she joked that it was ‘normal person sex’ which lasted ‘two minutes’ if she is being ‘generous’.

‘How many details can you really give about two minutes?’ she said playfully when asked to describe their alleged tryst.

‘It was just normal person sex,’ Daniels said of her alleged tryst with the president in 2006. Trump (pictured together at the Lake Tahoe golf tournament were they met) denies they ever slept together

She left the hotel afterwards without any argument and insisted that she never felt in danger while in Trump’s company.

‘Not once did I ever feel like I was in any sort of physical danger. I’m sure if I would’ve taken off running, he wouldn’t have given chase. And even if I had, there’s no way he could’ve caught me,’ she said, adding: ‘He’s even less likely to catch me now.’

Afterwards, she and her friends would laugh when he called her because he was ‘just The Apprentice,’ at the time, one of her friends told Vogue.

‘I’d be shooting and she’d call me over from the kitchen and say, “Look who’s calling,” and we’d start laughing. Donald Trump? Who cared? He was just The Apprentice then,’  photographer Keith Munyan, one of her close friends, said.

Trump has always denied having sex with Daniels, whose real name is Stephanie Clifford. At the time of their alleged encounter, he had been married to the first lady for a year.

Last week, his long serving lawyer flipped on him and admitted paying Daniels $130,000 to keep her allegations to herself ahead of the 2016 election.

For months, Trump said he did not know about the payments. In his plea, Cohen claimed the opposite and said he acted under Trump’s instruction.

Cohen pleaded guilty to campaign finance violations in doing so, among other criminal charges, and is now facing jail time.

Daniels gloated on Twitter after his plea. She later told Vogue: ‘Michael and I are vindicated, and we look forward to the apologies from the people who claimed we were wrong.’