Student, 22, who was diagnosed with stage four blood cancer at just 14 is studying for a master’s

A student diagnosed with stage four blood cancer at just 14 is now studying for a master’s degree at the University of Oxford.

Amelia Brown, now 22, thought she was just overdoing sport when she became fatigued and suddenly lost weight in October 2010.

The student, from Lincolnshire, only became concerned when she developed ‘tennis-ball sized lumps on her neck’, which her GP dismissed as swollen lymph glands during cold season.

Sensing something was wrong, Miss Brown went back to her GP in early 2011 and was referred for a scan. She was diagnosed with stage four Hodgkin lymphoma on April 15.

After six months of chemotherapy and two weeks of radiotherapy, she was told the disease had ‘completely gone’ on November 23.

Eight years on, Miss Brown is about to start a master’s degree in Victorian Literature and is even considering one day doing a PhD. 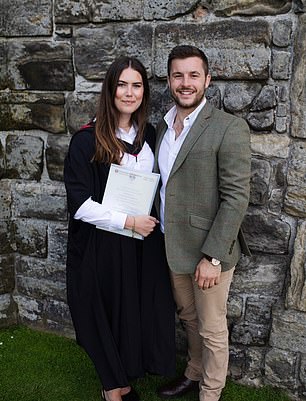 Amelia Brown (pictured left, recently) was diagnosed with blood cancer at just 14. Having overcome the disease, she is now studying for a master’s at the University of Oxford. She is pictured right at her graduation from the University of St Andrews with her boyfriend Josh

Speaking of when her symptoms started, Miss Brown said: ‘I was knackered. I just felt tired all the time but I was working hard at school and doing lots of clubs.

‘And it was winter so assumed I was just run down.’

‘I was doing a lot of hockey and football so no one noticed,’ she said.

‘I stopped wearing slippers as I thought maybe I was just sensitive to heat,’ she said.

‘I have very sensitive skin anyway and have had patches of eczema before so I just got on with it.’

Alarms bells didn’t even ring when the student developed a ‘pea-sized lump’ on the end of her collarbone.

‘I thought it was just bone fragment,’ she said. ‘I was quite blasé about it.’

Miss Brown only became concerned when she visible bulges cropped up along her neck. ‘I developed massive tennis ball-sized lumps’, she said.

The student went to her GP, who told her it was likely just a cold. When her symptoms failed to clear over Christmas, Miss Brown went back to her doctor, who suspected she may have glandular fever.

On the third visit, Miss Brown was referred to Peterborough City Hospital. She first had a blood test to determine if glandular fever was to blame, which was quickly ruled out.

The student was eventually diagnosed after a scan and biopsy revealed it was cancer, which had spread to her lung, neck and chest.

Speaking of the diagnosis, Miss Brown said: ‘It was shocking. I didn’t feel that much about it. I just shut it off.’ 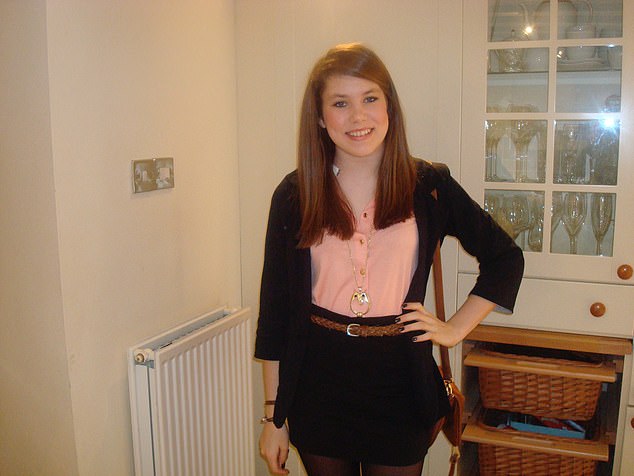 Miss Brown first started feeling fatigued and losing weight in October 2010. After multiple trips to her GP, she was referred for a scan at the start of 2011. She is pictured just days before her diagnosis on April 15. The dressing from a biopsy is visible to the left of her neck 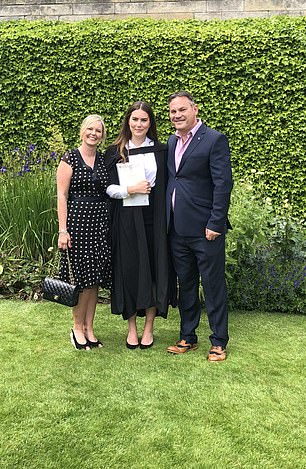 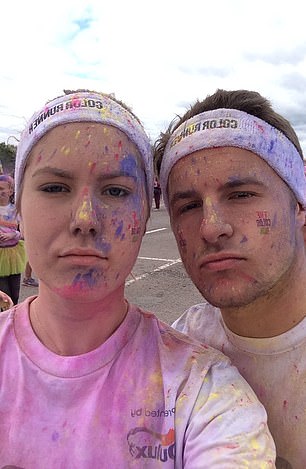 Miss Brown graduated with a first-class honours in English Literature. She is pictured left at the ceremony with her parents and right with her boyfriend after a 5K run for Leukaemia and Lymphoma Research in 2014. She admits finding it tough, with her body still being weak 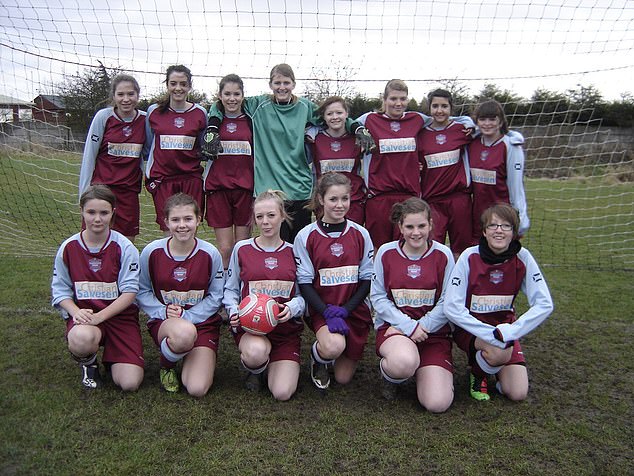 The intense chemotherapy caused the teenager to lose her hair. She was also put on steroids, which made her gain ‘tonnes of weight’.

‘I was 14 and struggling with self image,’ she said. ‘I had such a drastic change in my appearance.’

Miss Brown, who has always been academic, feels ‘lucky’ her chemo took place over the summer and she was able to go back to school in September.

However, her weakened immune system meant she got a ‘really bad case of shingles’ and had to stay at home for a month.

‘I’ve always loved school,’ Miss Brown said. ‘My classmates gave me their notes and I just copied them out.’

Miss Brown was told she was in remission in November 2011. For the first year she underwent tests every three months at Addenbrooke’s to ensure the disease had not returned.

These tests then went down to every six months for the next two years and annually for five years. ‘I haven’t been back for three years,’ Miss Brown said. 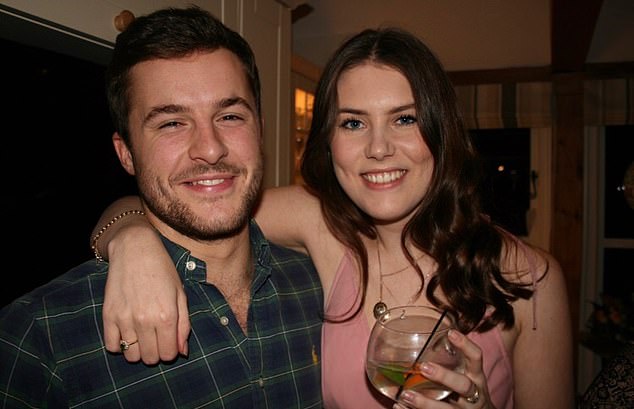 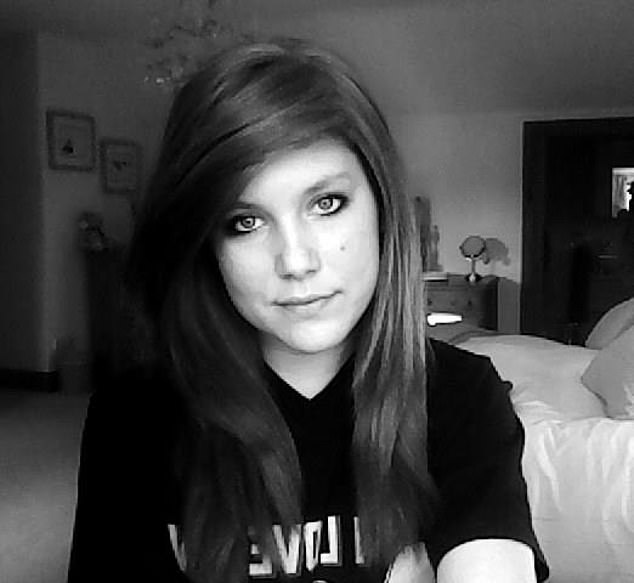 Miss Brown lost her hair while having chemo. She is pictured wearing a wig in February 2012. The student did not let anyone take a picture of her while she was battling her illness 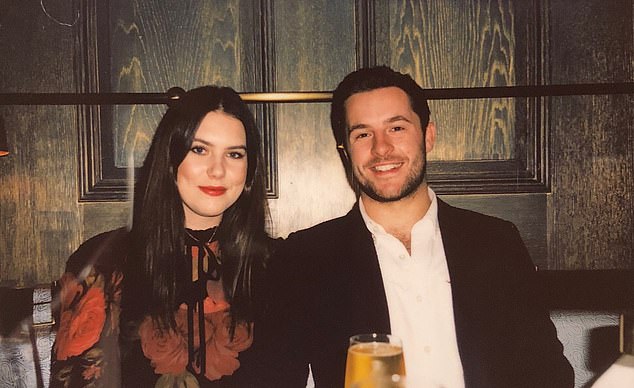 Miss Brown (pictured with her boyfriend) was warned chemo could affect her fertility. She was offered the chance to freeze her eggs but did not want ‘something else to worry about’

Despite all she has been through, the student manages to stay positive and ‘doesn’t live in fear of her cancer returning’.

She was warned at the time chemo could affect her fertility and may plunge her into an early menopause.

Miss Brown, who has been with her boyfriend Josh for seven years, said: ‘I was offered the chance to freeze my eggs at 14 but I didn’t want something else to worry about.

‘Early menopause may happen but I’m not thinking about it now.’

Looking to the future, Miss Brown is keen to continue studying the subject she loves.

‘I am considering pursuing academia once I have completed my master’s,’ she said. ‘I’m hoping to specialise in Victorian literature and psychiatry, and perhaps go on to do a DPhil at Oxford (what Oxford calls a PhD).

‘All I know is I’d like to be stimulated and in a fast-paced industry’.

Miss Brown, who is working with the charity Bloodwise, is speaking out to encourage parents to be aware of childhood cancers.

‘If we’d known the symptoms we might have caught it earlier,’ she said. ‘Don’t shy away from learning about cancer if you haven’t been affected by it.’