Neighbors of the suspected Golden State Killer have described the 72-year-old as a recent retiree who liked biking and lived with his daughter and granddaughter – but was prone to outbursts of anger.

Paul Sanchietti, who lives a quarter-block away, called DeAngelo ‘the odd neighbor’ and said the suspect would regularly lose his temper when working in his front yard, although he ‘calmed down a bit’ over the years.

‘He was aggravated or upset, his voice would carry, his swearing was alarming,’ he told the Sacramento Bee.

He said the former cop suspected of murdering 12 people and raping 51 in the 1970s and 80s liked fishing and going on bike rides to stay in shape. 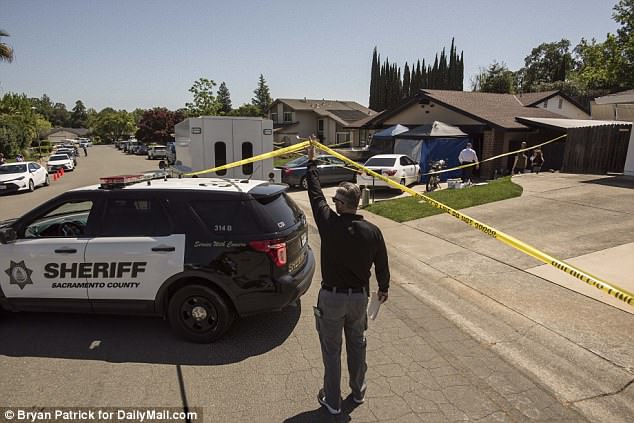 Next-door neighbor Cory Harvey watched as 30 FBI agents and other investigators combed through DeAngelo’s home on Wednesday morning (pic) and proclaimed, ‘I can’t even believe it’

It came as DeAngelo’s brother-in-law revealed the suspect once asked what he thought of the Golden State Killer’s crime spree and what he would do if he met the man responsible for it.

James Huddle, whose sister married Joseph James DeAngelo, told Oxygen.com: ‘He actually asked me about it once. He said, “What do you think of that East Area Rapist? What would you do, Jim?’

Cops today removed two cars, a boat and a motorcycle from DeAngelo’s garage and were seen apparently digging in his yard.

‘I have mixed feelings,’ Jack told the LA Times. ‘If something so horrific can happen so close to you, anything goes.’ 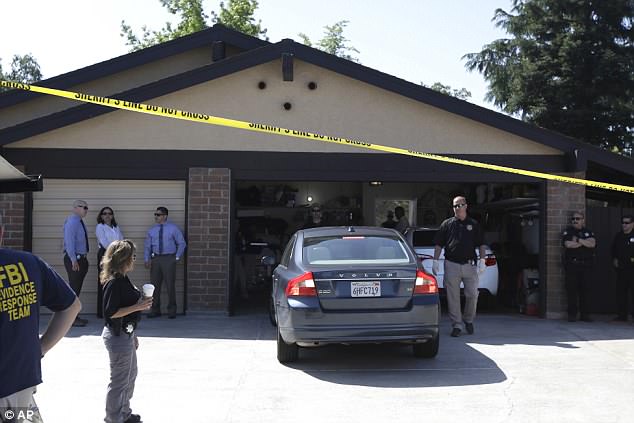 Another neighbor who lives a quarter-block away, Paul Sanchietti, called DeAngelo ‘the odd neighbor’, who regularly started swearing while working in his front yard (pictured) 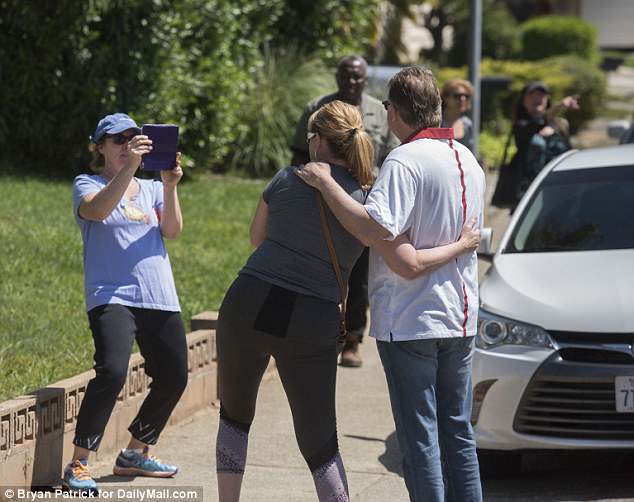 Mary Bailey a neighbor, takes a picture of her friends across the street from where DeAngelo lived

Hala, meanwhile, said DeAngelo had lived in the neighborhood for six years, and she had regularly walked past his house with her three children.

The couple watched a documentary on the Golden State Killer just two weeks ago, and found out about DeAngelo’s alleged involvement when they saw FBI agents outside his house at 8am on Wednesday.

Cops believe DeAngelo was committing murders and rapes while still an officer.

He was taken into custody by the Sacramento County Sheriff’s Department on Tuesday night on two murder charges for the 1978 deaths of Brian Maggiore and his wife, Katie, who are believed to be the Golden State Killer’s first victims. 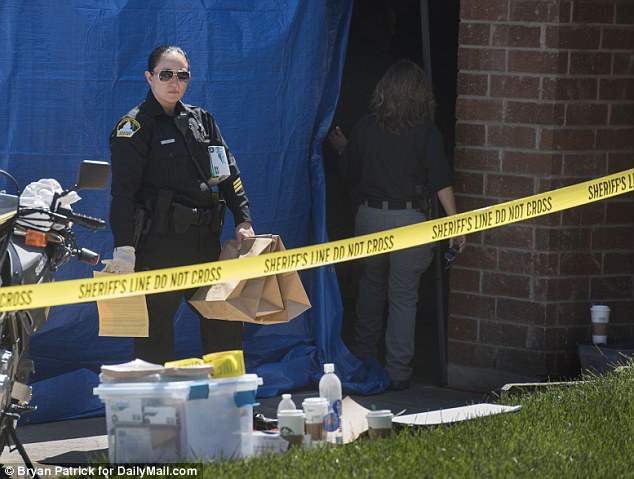 A sheriff officer searches DeAngelo’s home, which is now covered by a yellow line reading ‘do not cross’ 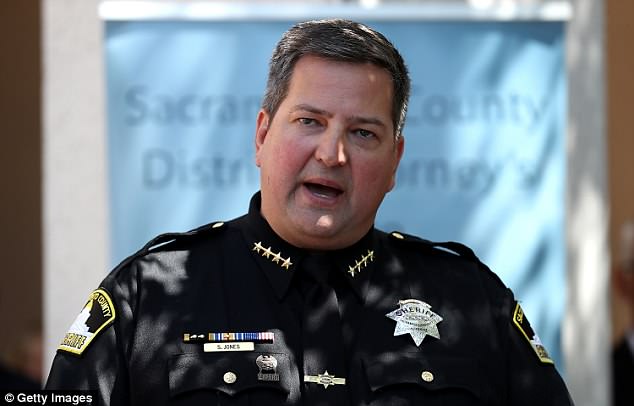 He was later also charged with the murders of Lyman and Charlene Smith of Ventura who were found dead in their home by their 12-year-old son. Police say DNA links him to both crime scenes.

Police are now working to link the 72-year-old unequivocally to the rest of the crimes that profilers have attributed to the Golden State Killer through his modus operandi. It is unclear how many of the crime scenes produced DNA evidence.

Officers waited outside DeAngelo’s home for him to exit and then jumped on him as soon as he exited the front door.

Investigators said DeAngelo has three adult daughters. An old wedding announcement says he married Sharon Marie Huddle in 1973, according to the Bee. 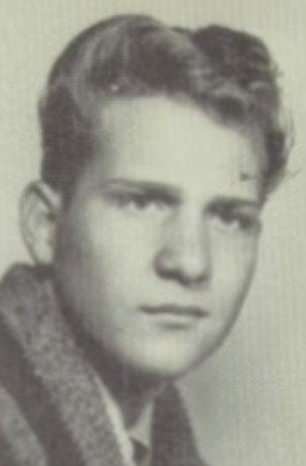 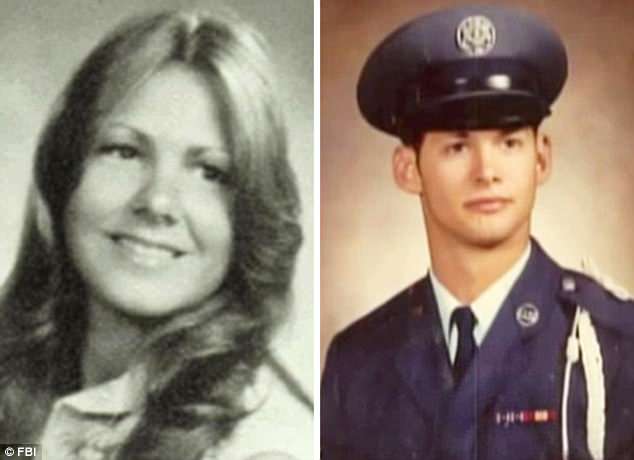 The killer’s first victims are believed to have been Katie Maggiore (left) and her husband Brian. The couple was out walking their dog on February 2, 1978 when they were chased down and murdered by the Golden State Killer, according to the FBI said 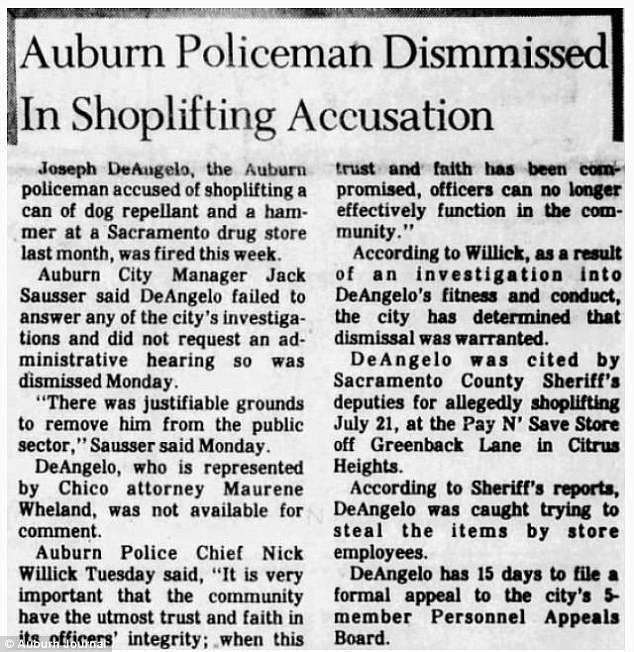