A man in his 40s has been bitten by a shark swimming at a popular tourist beach in Western Australia – the second attack in the country this week.

The swimmer was attacked at Quandong Beach near Broome at 1:20pm local time (11:20am AEST) on Friday morning while driving with friends between 300 and 500 metres offshore.

The man is being attended to by emergency services but is in a stable condition, breathing and speaking to paramedics.

It’s believed a three-metre tiger shark bit the man, according to a boat that brought the man back to the beach.

The Department of Primary Industries and Regional Development is currently investigating the situation.

A witness told 6PR the victim seemed ‘pretty chill’ after the attack despite all the commotion.

There was probably every cop in Broome just racing down the beach with the lifeguards,’ he said.

‘They were racing on to a boat that was eventually a bit further up from Cable Beach Tavern.

‘It was all pretty cool, calm and collected really. They just got him in the ambulance and drove off.

Accordingo to a St John Ambulance spokesman the man suffered deep lacerations to his hand and forearm before friends applied a tourniquet and helped bring him to shore. 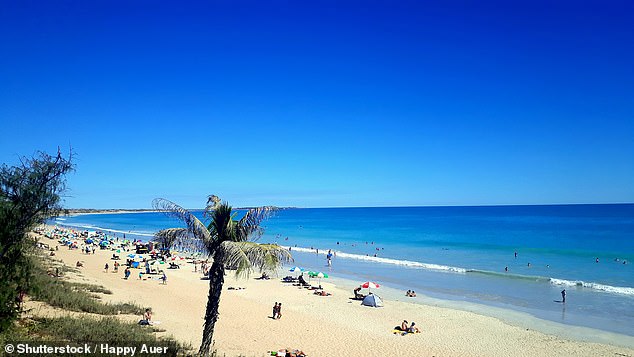 The man in his 40s was attacked at Quandong Beach near Cable Beach (pictured) north of Broome at 1:20pm local time

Charles Cernobori, 59, was killed by a shark at the nearby Cable Beach last year while bodyboarding about 30metres from shore.

A surfer in his 50s was fatally mauled by a 4.5m great white shark off Tuncurry Beach on the NSW mid-north coast on Tuesday morning.

He was desperately warning friends of the danger when he was attacked. It was the first death by a shark in Australian waters this year.