Swollen pinky finger was a rare sign of deadly tuberculosis for Californian woman, 42

It may seem over-the-top to go to hospital because of a painful pinky finger.

But one woman found her hand injury was actually a rare sign of an infection with the same bacteria which cause tuberculosis.

The unnamed 42-year-old sought medical help after the little finger on her left hand swelled up like a balloon and caused her pain for a week.

Because the woman had not injured her finger recently, doctors looked deeper to find the source of the problem, and found it was a bacterial infection.

Tuberculosis bacteria were living in the patient’s finger in what experts called a ‘rare manifestation’ of the illness outside of the lungs.

The unnamed woman, from California, went to hospital after the pinky finger on her left hand ballooned up and became red and painful for a week

Tuberculosis, also known as TB, is a bacterial infection of the lungs which can be deadly and is spread by coughing and sneezing.

The illness usually causes coughing, weight loss, fever, and tiredness and fatigue – if left untreated it can be fatal.

Doctors discovered the woman’s husband had caught TB while on a recent trip to China, and must somehow have passed it to his wife’s finger.

Her finger had swollen to twice its normal width and looked red and sore, and medics described its ‘warmth’ in a report in the New England Journal of Medicine.

But despite being infected with TB bacteria, the woman’s lungs were not affected by what is normally considered a breathing disease.

She was given a cocktail of drugs for nine months and made a total recovery, the report said.

Dr Jennifer Mandal and Dr Mary Margaretten, from the University of California, San Diego wrote: ‘Although infection of the finger is a rare extrapulmonary [outside of the lungs] manifestation of tuberculosis, it is an important consideration in immunosuppressed patients. 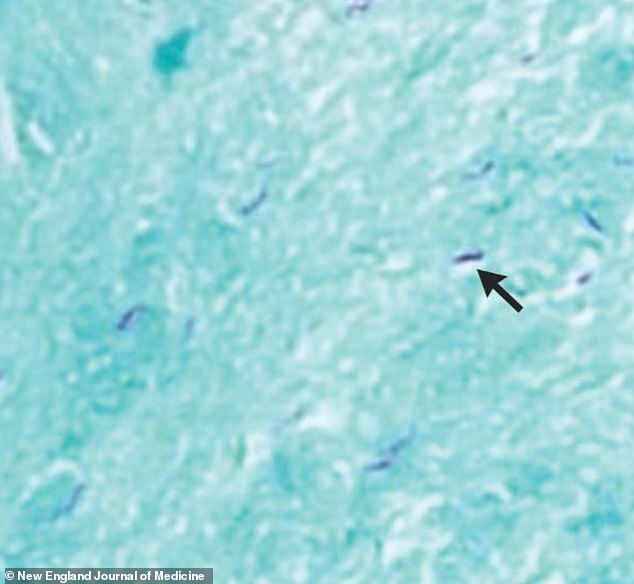 When doctors examined the woman’s finger in detail they discovered the bacteria which cause deadly lung infection tuberculosis, which they think she caught from her husband, who was recently diagnosed with the disease after a trip to China

‘This patient was treated with a four-drug antituberculosis regimen for a total of nine months and had complete resolution of her symptoms.’

TB of the lungs is the most contagious type of the infection and normally only spreads after a long period of being with someone with the infection.

Healthy people’s immune systems can often kill off the bacteria without causing symptoms, or can stop it spreading through the body.

But people with weakened immune systems are more susceptible to long term, more serious infection with TB – for example, it is a big killer of people with HIV in Africa.

The study did not make clear whether the woman suffering the swollen finger had a problem with her immune system.

Tuberculosis (TB) is a bacterial infection spread between people by coughing and sneezing.

The infection usually affects the lungs but the bacteria can cause problems in any part of the body, including the abdomen, glands, bones and the nervous system.

In healthy people the bacteria are often killed by the immune system or at least prevented from spreading, but in some cases the bacteria can take hold and cause a more serious infection.

TB infection causes symptoms like fever, coughing, night sweats, weight loss, tiredness and fatigue, a loss of appetite and swellings in the neck.

If the immune system fails to contain TB bacteria the infection can take weeks or months to take hold and produce symptoms, and if it is left untreated it can be fatal.

TB is a common cause of death among people with HIV, because it is particularly dangerous for people with weakened immune systems – people with HIV are thought to be up to 27 times more likely to get the disease.

With treatment, TB can almost always be cured with antibiotics and people tend to stop being contagious after about three weeks of therapy.

TB is most common in less developed countries in sub-saharan and west Africa, southeast Asia, Russia, China and South America.