Commuters are suffering through a day of chaos as train and bus drivers go on strike to end long-running negotiations over pay, conditions and privatisation.

Platforms, train carriages and buses were all crammed with passengers on Tuesday morning across Sydney – with those on their way to work told to expect major delays.

Public school teachers have also walked off the job over staff shortages and pay disputes in a headache for many parents.

It is the second consecutive day of public transport strikes with 1,200 bus drivers having stopped work for 24 hours on Monday.

Commuters are in for a day of chaos as train and bus drivers go on strike to end long-running negotiations over pay, conditions and privatisation (pictured in Sydney) 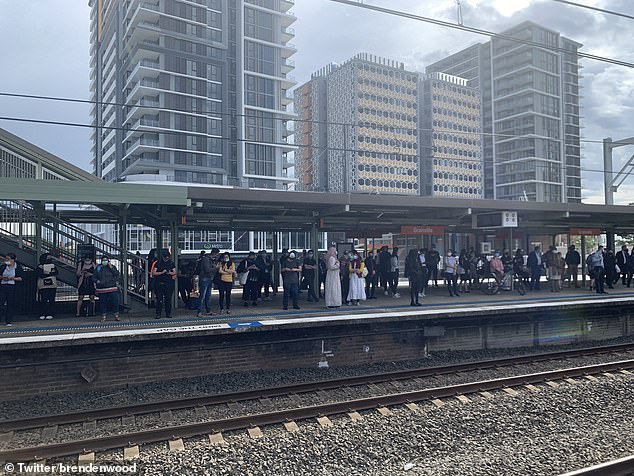 Platforms, train carriages and buses were all crammed with passengers on Tuesday morning across New South Wales – with those on their way to work told to expect major delays

The bus drivers’ union is calling on the state government to demand its contractor Transit Systems negotiate over a two-tier wage system that has some workers earning less than others for doing the same job.

About 300 bus drivers in the city’s southwest from Parramatta and Liverpool have stopped services.

Drivers from the inner west and south-west will then join forces on Friday and stop work for two hours amid peak travel times.

Bus commuters looking for alternative transport will be short of options, with train drivers refusing to operate foreign-made trains that run about three quarters of the services.

Passengers have shared photos of packed trains and buses to social media with one saying they were ‘crammed in like sardines’.

‘Got up earlier to catch the only train that would get me to work on time. It was delayed and so packed that it was impossible to board,’ another tweeted.

Others were frustrated they were unable to socially distance during their commute. 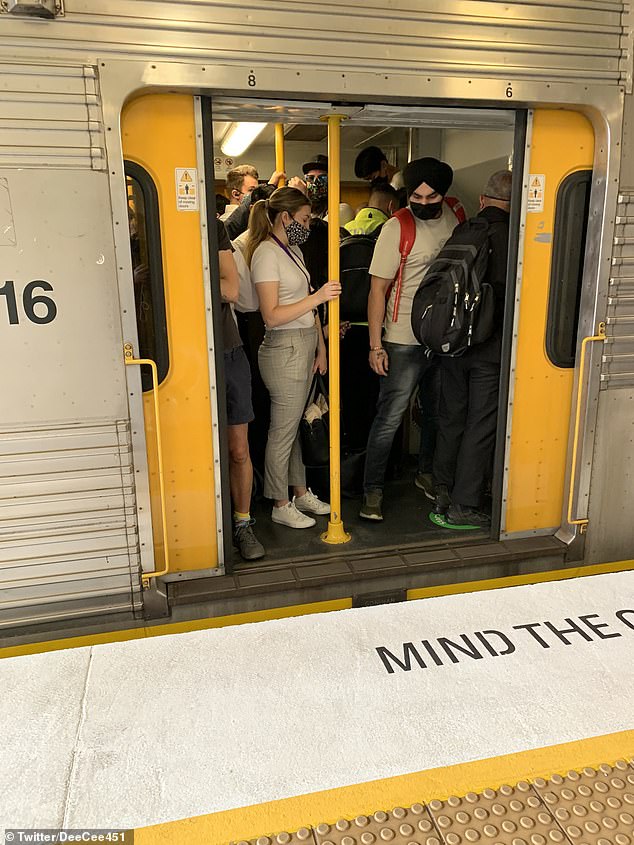 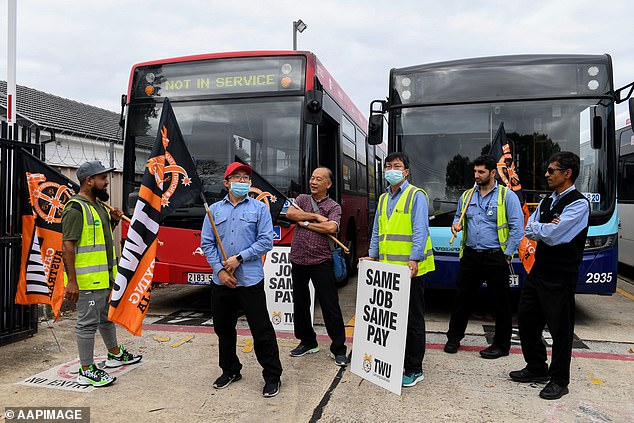 ‘Trains are more packed than ever with this strike. Are we still social distancing?’ said another.

One man claimed a passenger became injured due to the number of commuters on his train and had to be taken off the carriage.

Bus replacement services have been set up by Transport NSW between Lidcombe and Bankstown, and for routes in Wollongong.

Regional trains such as services in the Blue Mountains will run on a weekend schedule.

The Rail, Tram and Bus Union (RTBU) has been negotiating a new enterprise bargaining agreement after the old one expired in May.

Sydney Trains chief executive Matt Longland said Tuesday’s strikes were disappointing after more than 40 meetings between Sydney Trains, NSW TrainLink and the union, however the union says leaders they want to negotiate with have only just started coming to the table. 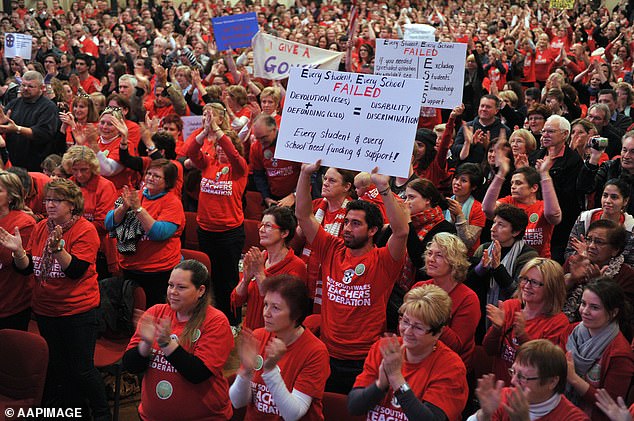 Meanwhile, public school teachers and principals are also off the job and are seen striking through Sydney on Tuesday 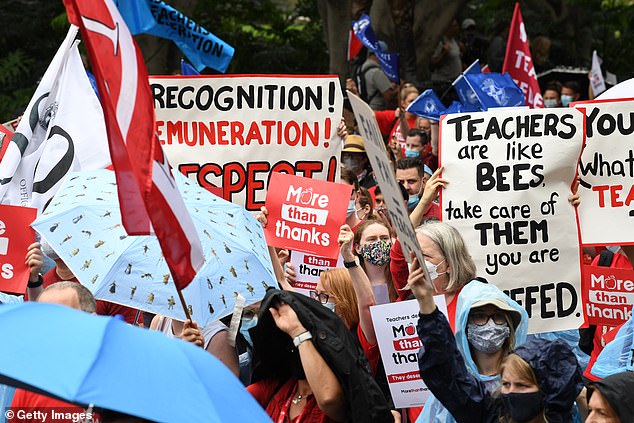 The union wants an end to privatisation, safety standards maintained and a commitment to retaining current hygiene standards while not relying on contractors to provide it.

Mr Longland said employees had been offered a 2.5 per cent pay increase, inclusive of superannuation.

Transport for NSW said Tuesday’s strikes meant services would run to a reduced frequency on most lines, make additional station stops and take longer to reach their destination.

‘We know that actions like this are an inconvenience to commuters, but the ball is in the court of management and the government,’ said Rail, Tram and Bus Union NSW secretary Alex Claassens.

‘They can stop this action by simply agreeing to workers’ basic asks around safety, hygiene and privatisation.’

Meanwhile, public school teachers and principals are also off the job, accusing the government of failing to address unsustainable workloads, uncompetitive salaries and staff shortages.

Thousands of staff members were seen marching through Sydney’s CBD on Tuesday, many carrying signs reading ‘more than thanks’.

Another teacher proudly carried a sign with the message: ‘teachers are like bees, take care of them or you are stuffed’. 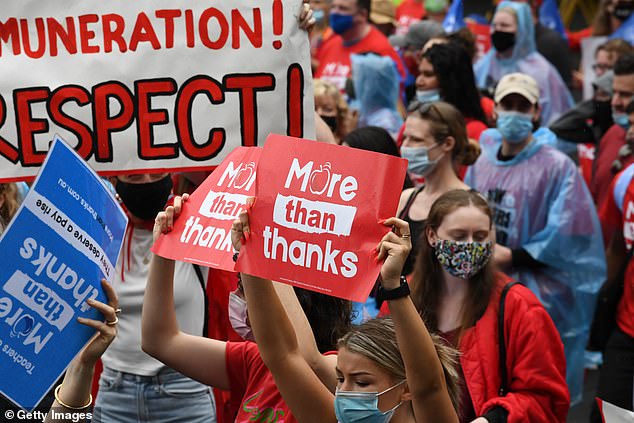 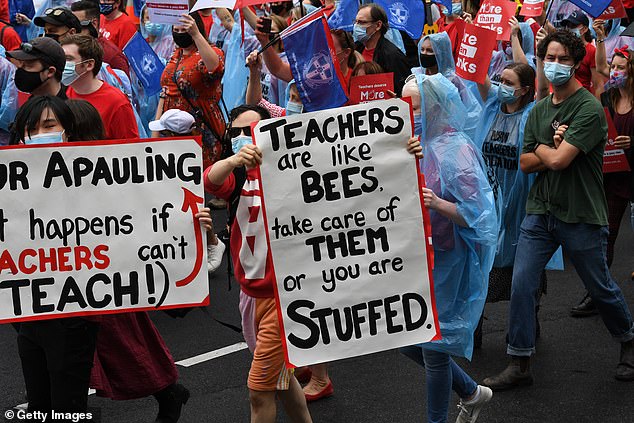 Another teacher proudly carried a sign with the message: ‘teachers are like bees, take care of them or you are stuffed’

Teachers’ workloads were ‘unmanageable’ and a wage cap meant their salaries didn’t ‘reflect the skills or responsibilities they have’.

They want a pay increase up to 7.5 per cent a year to ‘begin to reverse the decline in teachers’ wages compared to other professions’.

Mr Gavrielatos said the government was also lacking a coherent strategy to fill 3000 vacant positions and recruit 11,000 teachers the state would need in the next decade.

The demonstrations have angered NSW Education Minister Sarah Mitchell, who told 2GB she was ‘incredibly disappointed’ by the teacher’s union.

‘There’s more disruption being caused by the union today than we’ve seen in schools with covid cases since we returned to learning from home,’ she said.

‘Ultimately it’s the kids that will miss out, they need everyday in the classroom, they’ve missed so much already this year, we don’t need to be in this position and I’m incredibly frustrated the union has taken this approach.’

Ms Mitchell went on to say she knew many parents who were unable to go to work in order to look after their children amid the ongoing strikes.