The moment a hero tradesman confronts a ‘bad driver’ who sideswiped a stranger’s car has been captured on dashcam footage.

A man driving a Toyota Corolla sideswiped another car as he pulled in to park on the busy Victoria Road in Sydney’s Bondi Junction at 11:23am on June 17.

A tradesman who witnessed the incident then questioned the driver and took photos of his car, insisting that the owner must be informed about the scrape.

‘I have to tell him. This poor bastard has got all this damage to his car. Look! Look at the damage he’s got because of your bad driving,’ the tradesman said.

‘From your bad driving, you’ve got nothing wrong with your car.’

Footage of the incident was posted to the Dash Cam Owners Australia Facebook page on Thursday with a grateful message from the owner.

A tradesman (right) takes photos of damage to a stranger’s car while a Toyota Corolla driver (left) who sideswiped it inspects damage to his own vehicle. Footage of the incident was posted to the Dash Cam Owners Australia Facebook page on Thursday

‘My car got sideswiped while I was at work. A note was left on my windscreen with the guys name and number who hit my car,’ the owner said.

‘To the tradie in the orange shirt – you’re a bloody Aussie legend!’

The dashcam footage begins with a large bang and the car shaking as it was sideswiped by the parking Toyota Corolla.

A tradesman in an orange high-vis shirt was parked in front of the Corolla and wagged his finger at the driver as he witnessed the incident.

The Corolla driver then got out of his car to inspect a scrape on the side of his vehicle. His left sideview mirror had also moved inwards from the collision. 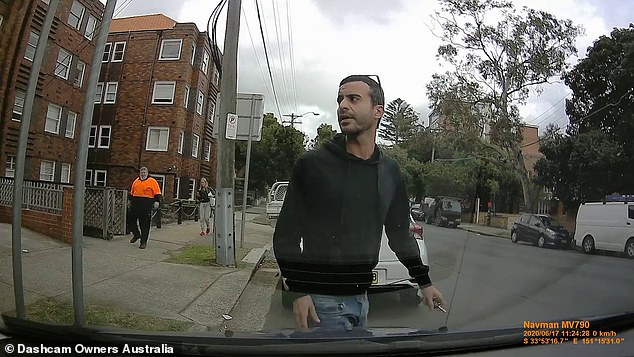 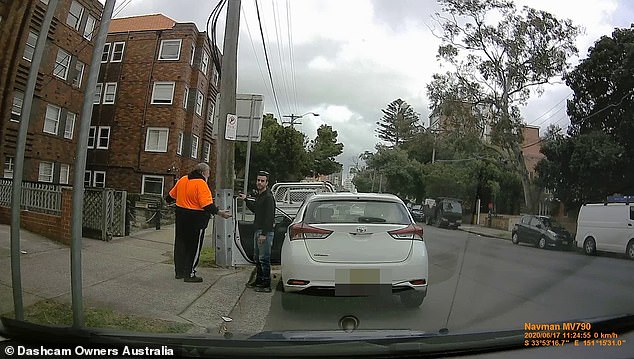 The tradesman confronts the Corolla driver, saying: ‘I have to tell him. This poor bastard has got all this damage to his car. Look! Look at the damage he’s got because of your bad driving.’

Another passerby inspected the damage and talked to the Corolla driver, saying: ‘You’re going to have to leave a note on there, buddy.’

The tradesman then walked over to speak with the driver before taking photos of the Corolla and the other damaged car.

It’s at this point he accused the Corolla owner of ‘bad driving’ and insisted the other car’s owner must be informed.

The footage then cuts off. The tradesman likely left a note for the damaged car’s owner sometime after this.

The incident was recorded on a Navman dash camera, which also recorded the date, time, exact coordinates and speed of the damage car, which was stationary. 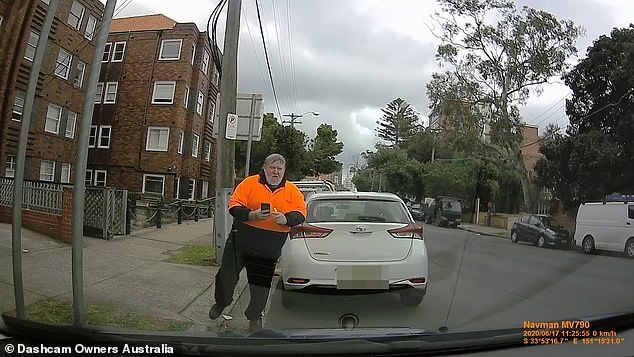 The tradesman takes a photo of the stranger’s damaged car. The owner has thanked him and praised him as ‘a bloody Aussie legend’