When Francis Ford Coppola was filming his Mafia opus The Godfather in 1971, a struggling young actor was determined to appear in the movie. It begins with an iconic wedding scene and the budding thesp, whose biggest screen credit then was ‘Stud’ in an X-rated adult comedy, asked to be one of the extras, only to be told he wasn’t ‘the type of guy’ the filmmakers were looking for.

The actor in question was a 25-year-old Sylvester Stallone, and having been rejected as one of the 500 extras ‘who basically stood behind a wedding cake’ he admits that appearing in a gangster show has been a burning passion ever since. ‘It just never happened,’ he says.

Until now. In his latest project Tulsa King, his first major TV series, Sylvester stars as Dwight ‘The General’ Manfredi, a New York mobster who, after serving a 25-year prison sentence, returns to his Mafia family. Fully expecting to be rewarded for ‘keeping his mouth shut’ in prison, he is instead sent to Mob Siberia – or Tulsa, Oklahoma, to be precise – to pick up the pieces of his life.

‘I’d been trying to get into gangster films,’ says the 76-year-old Italian-American. ‘So finally everything comes to those who wait.’

Sylvester Stallone (pictured) explains that he has always had a passion to play a gangster. The actor’s latest project Tulsa King is not only his first role as a New York mobster but is also his first major TV series

On alighting in Tulsa, where the corn fields and open spaces are a world away from his New York roots, Dwight is ordered to build up a new operation for his bosses. Sensing his Mafia family may not have his best interests in mind, he assembles his own crew – a ragtag bunch including retired rodeo bull-rider Mitch (Garrett Hedlund), cabbie turned chauffeur Tyson (Jay Will) and Bodhi, the proprietor of a medicinal marijuana dispensary (Martin Starr).

He also has to negotiate the attentions of federal agent Stacy (Andrea Savage), as well as the resentment of his estranged daughter Tina (Tatiana Zappardino).

‘Dwight’s out of his element,’ says Sylvester. ‘Now his gang is made up of cowboys, Indians, women, fellas that run a weed store.

‘In other words, a group of complete misfits that fit, finally, together as a family.’

The mob genre may have been done to death, but Tulsa King offers a Mafia tale with a twist. While we see Dwight wielding a coffee flask and a telephone wire as dangerous weapons, Sylvester says his aim was to portray a more nuanced kind of gangster. ‘This is a fella who’s very educated,’ he says.

‘He reads Marcus Aurelius and Plato. He’s into the Classics. He’s a different animal to what you’d normally see in a gangster film.’

And he’s a different animal to the man who went to prison 25 years earlier, according to one of the show’s executive producers, Terence Winter. ‘He’s spent the last 25 years working out and reading every day, so he’s more thoughtful,’ he says.

I grew up around these mugs, so I’ve got the attitude. I understand street life very, very well

‘He’s more judicious in how he doles out violence. That’s not to say he doesn’t do it, he certainly does, but it comes with a certain reluctance.’

Winter, whose other mob series include blockbuster The Sopranos and Boardwalk Empire, stresses that Tulsa King is different. ‘It’s not about a Mafia family, it’s more about one particular Mafioso,’ he says.

‘In a traditional mob show, Dwight would be involved with his New York family and they might be fighting other mob families. In Tulsa, Dwight’s on his own so the people he encounters and the challenges he faces are different.’

To that end we see Dwight struggle with every facet of Tulsa life – from the God-fearing locals to getting his head around the concept of medicinal marijuana – and that inspires some dark humour. ‘I hope people enjoy the dark comedy,’ says Martin Starr. ‘This is a fun departure for Sly.’

Having grown up in the tough Hell’s Kitchen neighbourhood of New York and attended school in Philadelphia, Sylvester admits he didn’t need to do much research into the gangster lifestyle. ‘I grew up around a lot of these mugs,’ he says. 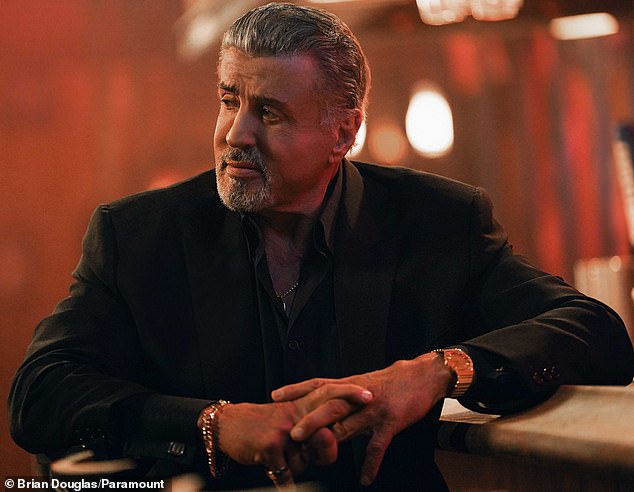 ‘In Philadelphia you’re always bumping shoulders with them, especially in South Philly. So I’ve got the tempo, I’ve got the attitude. I understand street life very, very well.’

The show is the brainchild of Taylor Sheridan, who created hit western drama Yellowstone. Like Tulsa King, it features a male lead (Kevin Costner) who’s unafraid to resort to violence to get things done, and Sylvester acknowledges that he Sheridan are throwbacks to a different time.

‘We’re both steeped in the alpha tradition where life is hard,’ he says. And like many of Sylvester’s previous characters (Rocky, Rambo), Dwight is an avowed underdog, looking ‘to overcome the odds’, he says.

Sylvester’s previous TV credits amount to a couple of minor appearances in shows such as 70s hit Kojak (although his family including wife Jennifer Flavin – with whom he’s back together after a recent separation – spent the summer filming a fly-on-thewall show).

So it’s perhaps fitting that Sheridan was the one to lure him into a major TV role (he got Costner to do Yellowstone, and Harrison Ford and Helen Mirren will star in the upcoming prequel 1923). ‘I’m glad I finally got to jump on this train,’ says Sylvester.

It may have taken five decades, but his dreams of playing a gangster on screen have finally come to fruition. ‘Taylor’s original concept was the mixing of these two tried and tested genres, the western and the gangster show,’ says Terence Winter.

Or as Sylvester more succinctly puts it: ‘Take a gangster, put them next to a cactus, and let the fun begin.’