A councillor has been found guilty of exposing his genitals three times in front of a Crown prosecutor and her son at a beach.

Tasmanian politician Darren Fairbrother, who has been elected to the Waratah-Wynyard council since the mid 1990s, pleaded not guilty to exposing himself last year.

The incident occurred at Boat Harbour beach in Tasmania’s north-west in January 2021 when Mr Fairbrother was accused of exposing himself to a Crown prosecutor, Kate Brown, who is married to a Launceston magistrate, Simon Brown.

Mr Fairbrother had told the court his shorts had become caught on a rock, causing them to fall down and uncovering the G-string he was wearing underneath, the ABC reported.

As a result he said his buttocks had become exposed, but ‘not 100 per cent of it’.

He was questioned by prosecutor Phillipa Edwards as to why he didn’t simply pull his shorts back up again.

Despite the incident occuring in Tasmania, a South Australian magistrate was brought in to oversee the case.

Magistrate Teresa Anderson handed down her decision via video-link in the Burnie Magistrates Court on Wednesday.

She said she was satisfied beyond reasonable doubt that Mr Fairbrother was guilty of exposing himself at the beach. 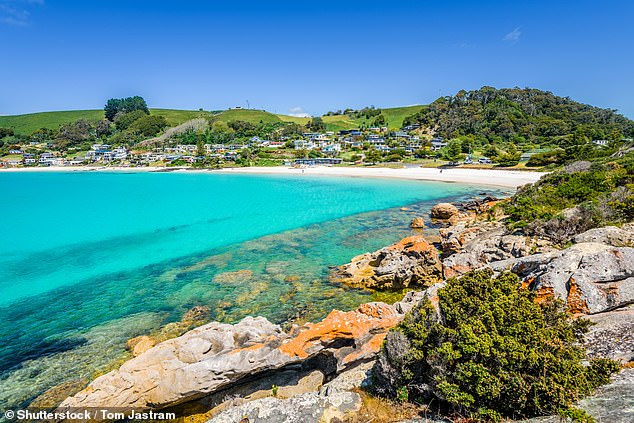 The magistrate also said Mr Fairbrother’s account ‘did not bear up to close scrutiny in cross-examination’ and was told in a ‘rehearsed manner’.

Mr Fairbrother repeatedly told the court he had not exposed his genitals to the family – yet the magistrate concluded he was not a ‘credible witness’.

Magistrate Edwards said the defendant had not shown any remorse, and said an order restricting him from loitering on Boat Harbour beach should be considered.

‘A young person was on the beach and saw it, and also it involved an exposed penis,’ she said.

The court had earlier heard Mr Brown had approached Mr Fairbrother about the incident with his wife.

Magistrate Anderson adjourned the matter to sentence Mr Fairbrother in May.