A teacher in Alabama said she was told to go home and change after she showed up to class on Monday with a t-shirt that had the words ‘just pray’ on it.

Chris Burrell, a third grade teacher at Pearl Haskew Elementary School in Mobile County, posted about the incident on her Facebook page writing that she ‘didn’t think twice’ about wearing the shirt and had never had something like that happen in her 15 years as a teacher.

‘My heart hurts,’ she wrote.

Chris Burrell, a teacher in Alabama, said she was sent home because of her ‘dress pray’ t-shirt 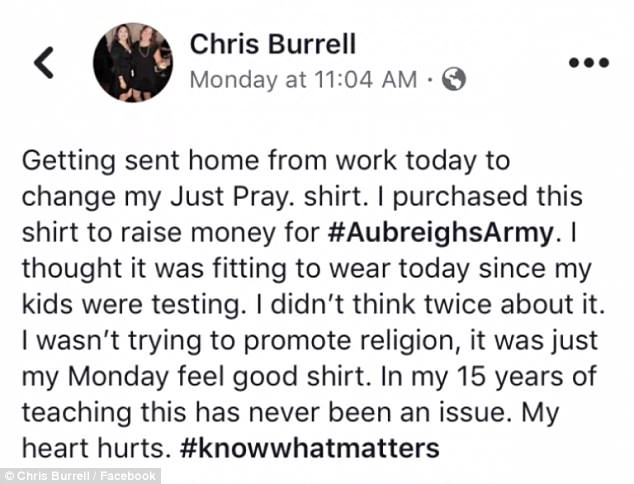 ‘So at the point of looking and seeing “pray” on it, the principal said, can you put on a sweater or something, knowing that there are other people who object to that… we have to be cognizant of everyone’s beliefs or everyone’s thoughts in a public school,’ Peek told the outlet.

Burrell said she was not trying to ‘promote religion’ when she wore the shirt to class. In fact, she said she purchased the t-shirt to support Aubreigh Nicholas, an 11-year-old girl who was diagnosed last year with a rare and inoperable brain tumor.

‘I purchased this shirt to raise money for #AubreighsArmy. I thought it was fitting to wear today since my kids were testing,’ Burrell wrote. ‘I didn’t think twice about it. I wasn’t trying to promote religion, it was just my Monday feel good shirt.’ 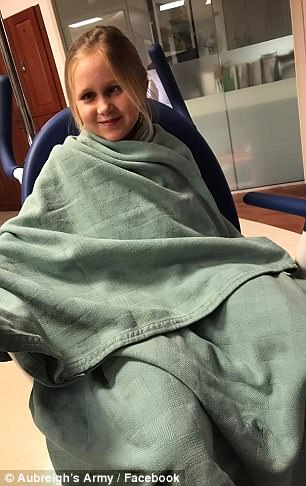 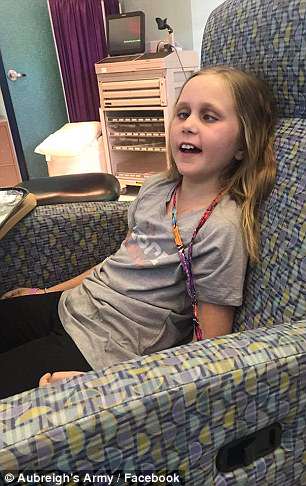 Burrell said she was not trying to promote religion. She purchased the shirt to support 11-year-old Aubreigh Nicholas (pictured), who is battling an inoperable brain tumor

Peek said the principal was unaware the shirt was in support of Nicholas and they are ‘totally supporting’ the young girl.

‘I think that this was just an unfortunate connection there, but still the principal would have had to exercise her judgment,’ Peek explained.