A prehistoric reptile that roamed the coasts of Africa 66 million years ago had deadly shark-like teeth that could cut a fish in half with one bite, a study has revealed.

Researchers have discovered the fossilised remains of a new species of mosasaur – an ancient sea lizard from the age of the dinosaurs.

This particular species was found to have shark-like teeth that gave it a deadly slicing bite.

The discovery adds to the diversity of marine reptiles in the late Cretaceous period, and suggests their diversity peaked just before the dinosaur-killing asteroid hit 66 million years ago, according to the researchers.

Xenodens calminechari was a species of mosasaur that lived off the coast of Morocco 66 million years ago.

This particular species was found to have shark-like teeth that gave it a deadly slicing bite.

While the sea lizard was only the same size as a small porpoise, its cutting teeth would have allowed it to attack large fish, cutting them in half and taking large bites.

The fossilised remains of the new species, called Xenodens calminechari, were discovered in the Maastrichtian Phosphates of Morocco by researchers from the University of Bath.

Dr Nick Longrich, Senior Lecturer at the Milner Centre for Evolution at the University of Bath and lead author of the study, said: ’66 million years ago, the coasts of Africa were the most dangerous seas in the world.

‘Predator diversity there was unlike anything seen anywhere else on the planet.

‘The new mosasaur adds to a rapidly growing list of marine reptiles known from the latest Cretaceous of Morocco, which at the time was submerged beneath a tropical sea.

‘A huge diversity of mosasaurs lived here. Some were giant, deep-diving predators like modern sperm whales, others with huge teeth and growing up to ten meters long, were top predators like orcas, still others ate shellfish like modern sea otters – and then there was the strange little Xenodens. 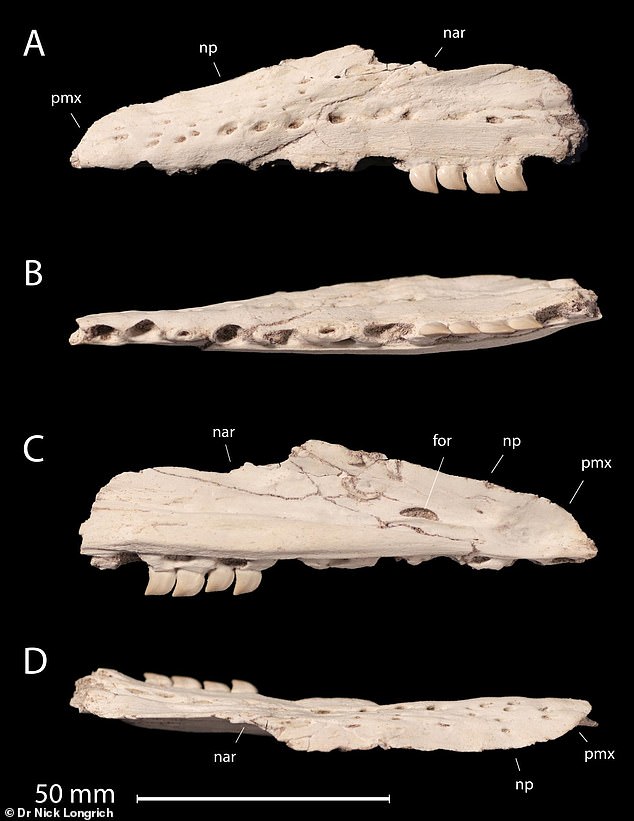 While the sea lizard was only the same size as a small porpoise, its cutting teeth would have allowed it to attack large fish, cutting them in half and taking large bites

‘The new mosasaur adds another dangerous predator to the mix.’

While the sea lizard was only the same size as a small porpoise, its cutting teeth would have allowed it to punch above its weight, cutting fish in half and taking large bites from bigger animals.

‘They’re like the knives sold on those old late night TV commercial- they’ll slice through anything,’ said Dr Longrich.

Mosasaurs lived alongside dinosaurs before the asteroid struck and wiped out 90 per cent of all species on Earth.

A reconstruction of its skull reveals that its teeth were tightly packed, creating a serrated-like effect

However, the new study indicates that the ecosystem wasn’t in decline before the asteroid hit, and instead it’s likely that marine reptiles were actually expanding in diversity.

Dr Nour-Eddine Jalil of the National Museum of Natural History in Paris and Universite Cadi Ayyad in Marrakech, said: ‘A mosasaur with shark teeth is a novel adaptation of mosasaurs so surprising that it looked like a fantastic creature out of an artist’s imagination.

‘It is as if nature is struggling to find all the combinations for an ever finer exploitation of food sources.’