The Chaser comedy group has promised to have the words ‘convicted paedophile’ permanently welded onto a plaque of George Pell.

Pell had his appeal dismissed on August 21 after he was sentenced to a minimum of three years and eight months in prison.

Shortly after his appeal was dismissed, comedy group The Chaser visited St Mary’s Cathedral in Sydney, where a commemorative plaque dedicated to Pell is on display.

In videos shared to Facebook, funnyman Charles Firth first used Blu-Tack to stick a golden sticker to the plaque, which read ‘convicted paedophile’.

Prank: On Wednesday, a comedian from The Chaser visited St Mary’s Cathedral in Sydney, where a commemorative plaque dedicated to paedophile priest George Pell is still on display

When it was quickly removed the group opted to use super-glue to once again add the gold-coloured plate.

‘We’re here at St Mary’s Cathedral,’ the comedian says in the video.

‘Here’s George Pell’s plaque proudly on display and yet it’s missing his most noteworthy achievement! So, I’m going to have to fix that.’

He then attaches the sticker, before saying: ‘There we go, much better! “Cardinal George Pell AC, Eighth Archbishop of Sydney, 2001 to 2014… and convicted paedophile”.’

Videos of both attempts were posted online and met with widespread approval on Facebook.

However, the Catholic Church has since claimed the footage uploaded by the comedy group is fake and they used Photoshop – and has once again removed the plaque’s addition.

‘The plaque of Cardinal Pell has not been defaced and the Chaser video was doctored on Photoshop,’ a spokesman for the Catholic Archdiocese of Sydney told the Sydney Morning Herald. 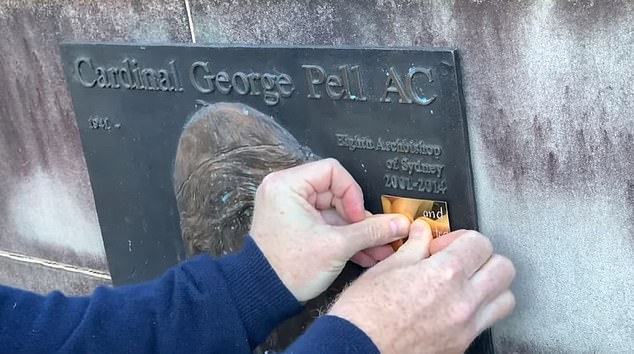 Update: In a video shared to Facebook, the comedian glued a golden sticker to the plaque, clarifying to any visitors that Pell is a convicted child sex abuser 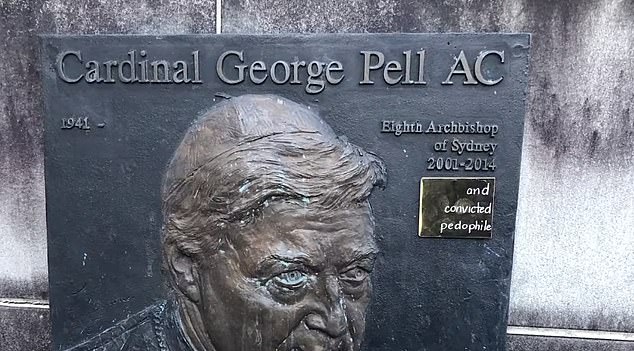 Mr Firth said the claims that the group edited the videos using Photoshop were ‘absurd’.

‘Of course the footage isn’t doctored. I’m very flattered that they think we could photoshop a whole video. If you could get them to endorse my photoshop skills on LinkedIn that would be great,’ he said.

The comedy group is now looking to organise someone to professionally weld the words onto the plaque in the hopes of keeping them permanent.

‘We think it should stay up there, but in an updated form. We’re not in the business of denying what’s happened in the past: that’s what the Catholic Church does,’ Mr Firth said. 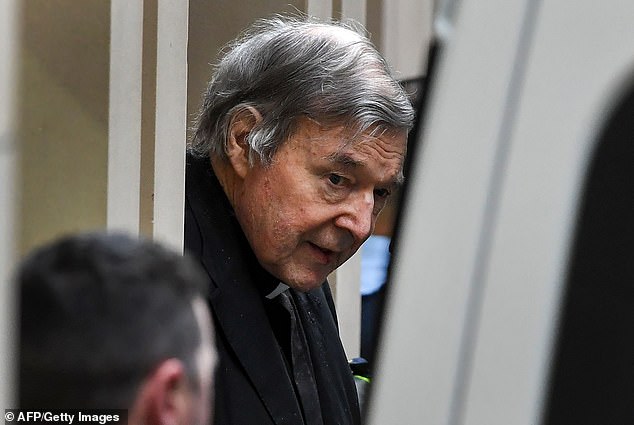 Beast: On Wednesday, Pell’s appeal against the result of his December trial was dismissed by the Victorian Court of Appeal. Pictured outside court being escorted back to jail in handcuffs

In December, Pell was convicted of molesting two choirboys at St Patrick’s Cathedral in 1996, when he was the newly-installed Archbishop of Melbourne.

The 78-year-old, who is the most senior Catholic representative to be found guilty of child sex abuse, failed to overturn his conviction in the Court of Appeal on Wednesday.

The disgraced former Vatican treasurer is back behind bars, but is considering a High Court appeal in a desperate final bid for freedom.

In a two-to-one decision, the court upheld Pell’s original conviction for raping a choirboy and molesting another at St Patrick’s Cathedral in 1996.

This means Australia’s most senior Catholic official must serve out his six-year sentence with a non-parole period of three years and eight months.

Following the appeal dismissal, Pell will be stripped of his companionship of the Order of Australia, which he was presented with in 2005. 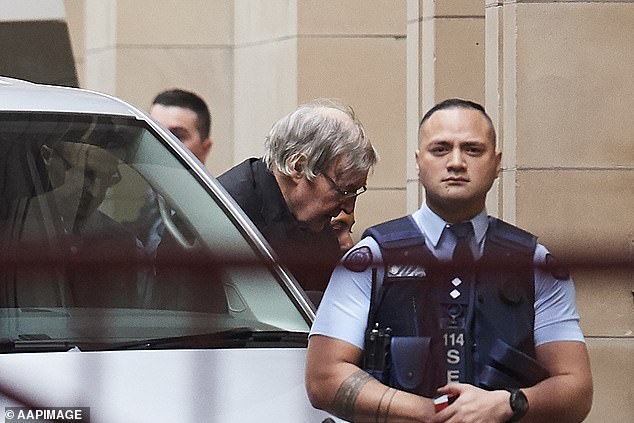 Abuser: In a two-to-one decision, the court upheld Pell’s original conviction for raping a choirboy and molesting another at St Patrick’s Cathedral in 1996