Here’s a royal treat for fans of The Crown – pictures of the filming locations for the latest season cleverly matched with scene stills.

The fascinating pictures were captured by 20-year-old film student Thomas Duke, who is a massive fan of the show, which chronicles the life of Queen Elizabeth II – this season played by Olivia Colman.

To create the mesmerising composites he visited, among other places, the Old Royal Naval College in Greenwich, London, St Mark’s Church in the village of Englefield in Berkshire, the grand Stowe Estate in Buckinghamshire and a villa in Essex that doubles up as the White House in the gripping Netflix drama.

Inside the Old Royal Naval College in Greenwich, south-east London, which was used as a filming location for season three of The Crown. It is matched with a scene that was shot there featuring the Queen, played by Olivia Colman, from episode nine 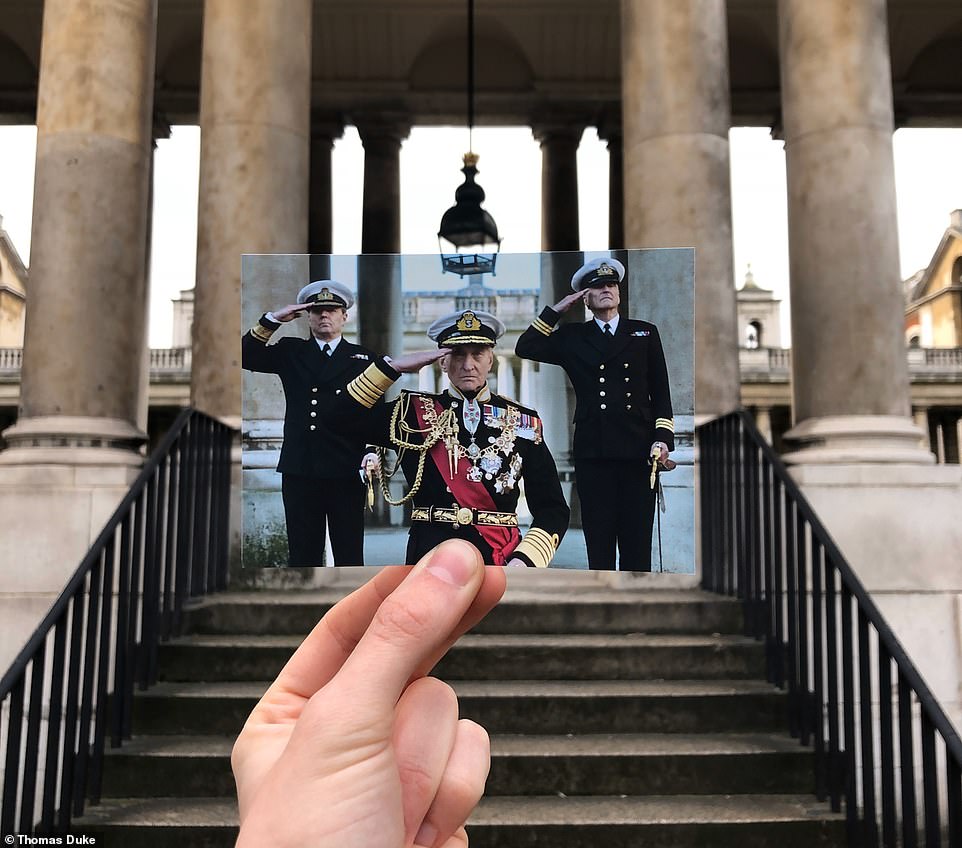 Thomas captured this image at the Old Royal Naval College. This part of the building was used in a scene from episode five featuring Lord Mountbatten, who is played by Charles Dance

Thomas told MailOnline Travel: ‘I was always really fond of the first two seasons of The Crown and admired the art in the series.

‘The acting was wonderful and the elegance was raw through the talent and passion of Claire Foy and Matt Smith.

‘With the announcement of Olivia Colman taking over from Foy, I couldn’t wait to see this third season.

‘Some of the locations were really easy to find. The Naval College is a staple for filming. I’ve visited there in the past for Thor: The Dark World, Les Misérables and Now You See Me 2, so it’s very recognisable whenever I see it on screen. 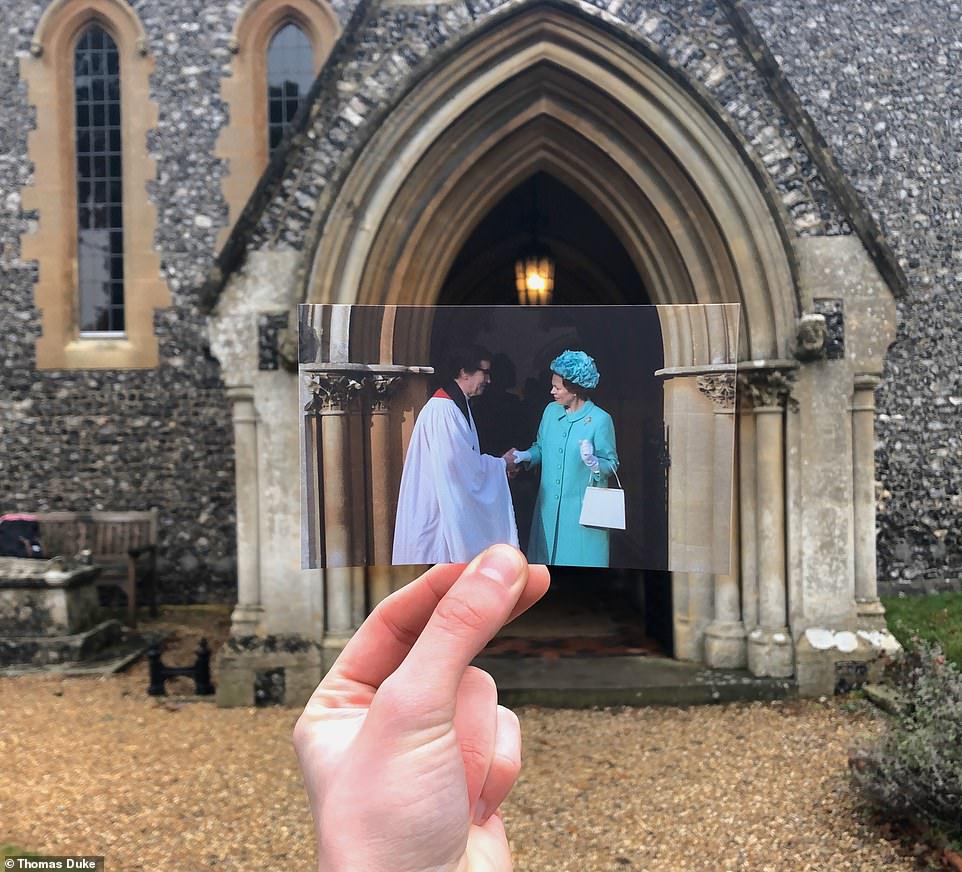 St Mark’s Church, pictured, in Englefield near Reading was used to film the church scenes that feature in episode seven 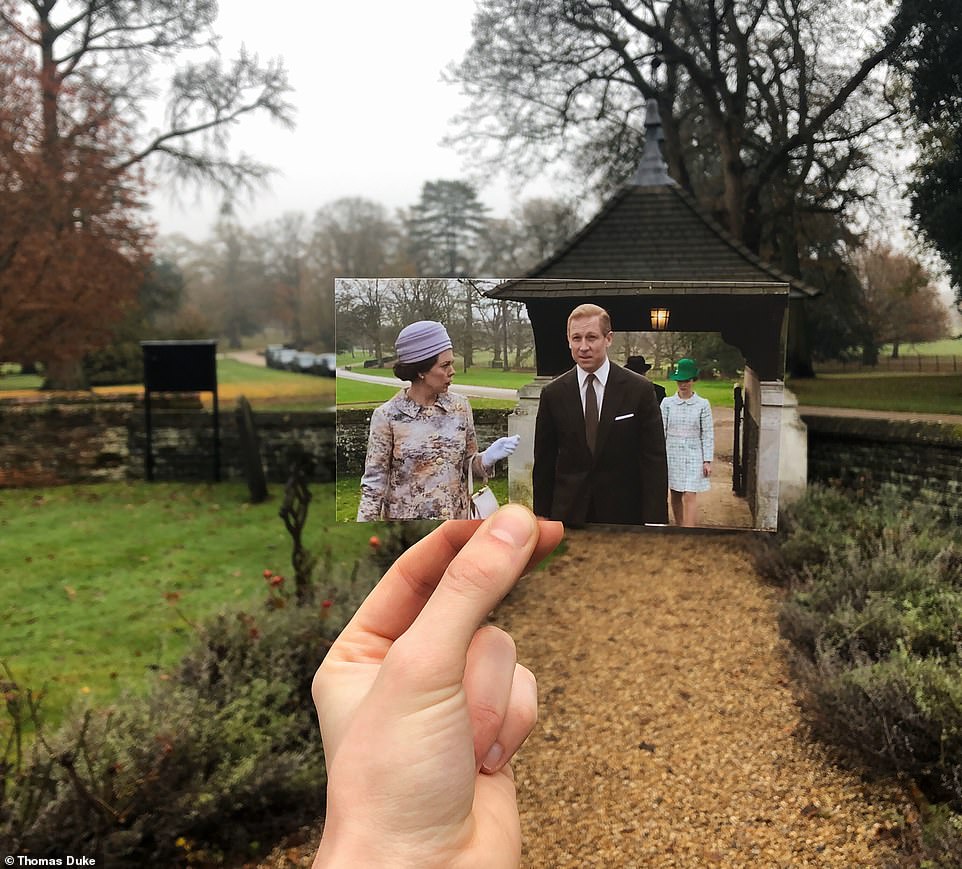 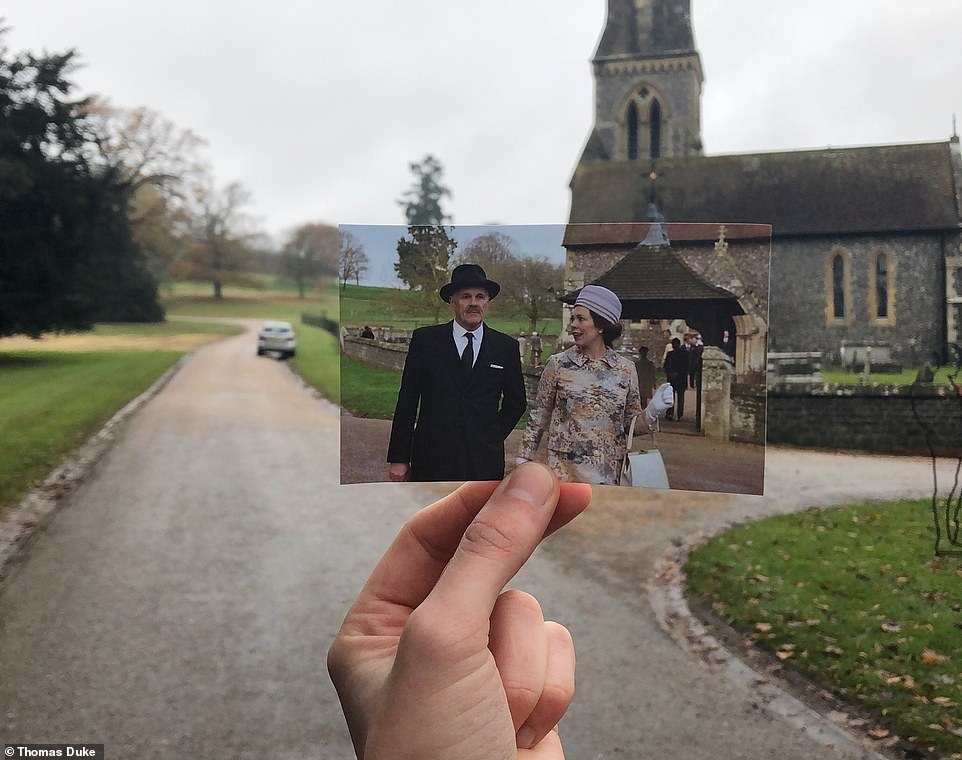 Thomas recognised St Mark’s Church, pictured, as a filming location in The Crown as he had previously been to nearby Englefield House, where scenes for X-Men were shot

‘St Mark’s Church was a very coincidental one. In October 2018 I visited the X-Mansion from the X-Men series – Englefield House in Reading. When I watched The Crown and saw the church I had deja vu.

‘I’d walked past the church last October as it’s right next to Englefield House.

‘Stowe Estate is a National Trust estate so that was quite easy to Google. But Hylands House took a bit of research. To line them up it takes a little patience and persistence.’

Thomas has been creating images matched with stills from TV shows and movies for two years and posting them to his Instagram account – @SteppingThroughFilm. 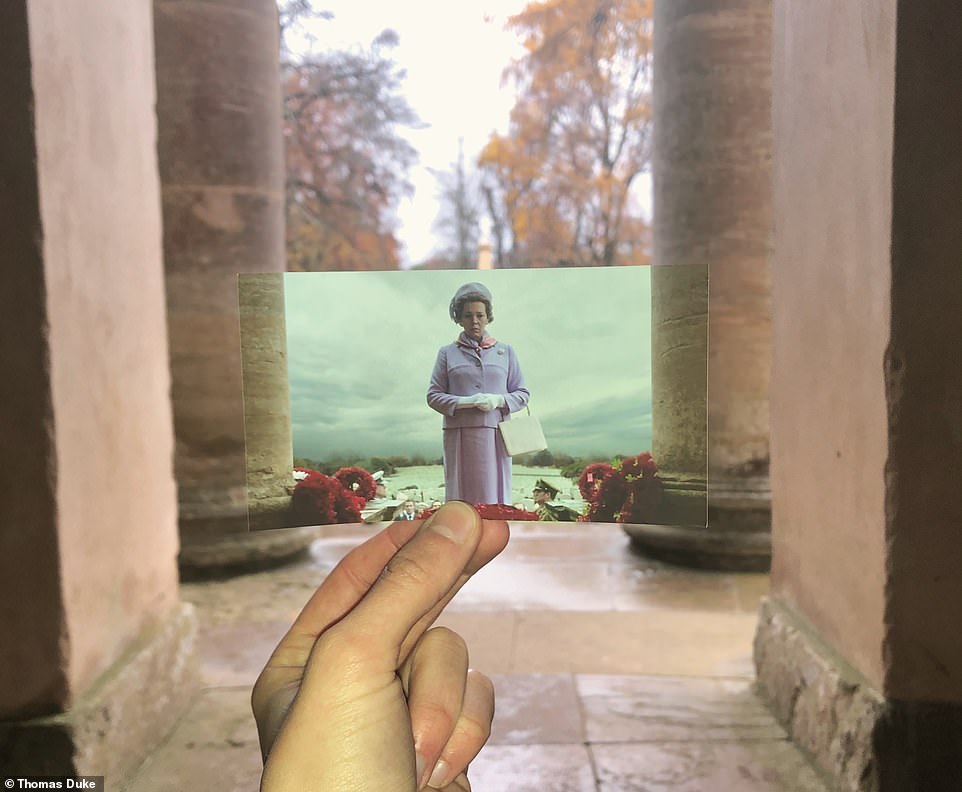 The Temple of Ancient Virtue on the Stowe estate in Buckinghamshire, which features in episode eight of The Crown, season three, in a funeral scene 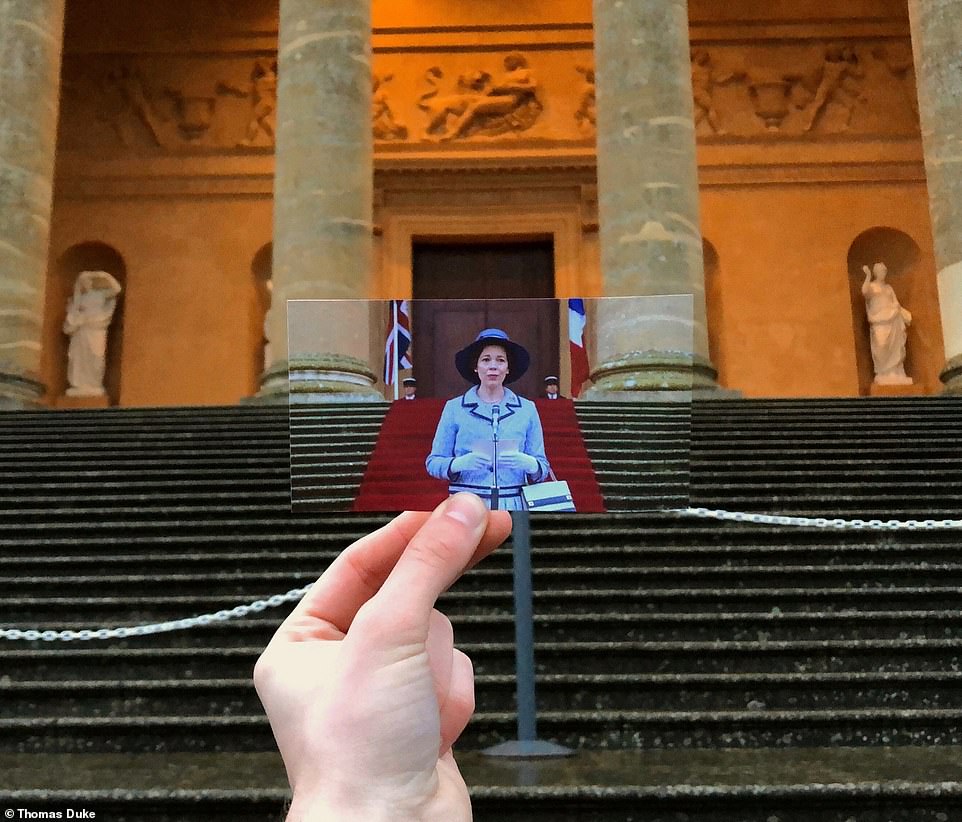 Stowe House, pictured, was used as the setting for this scene from episode eight featuring the Queen giving a speech 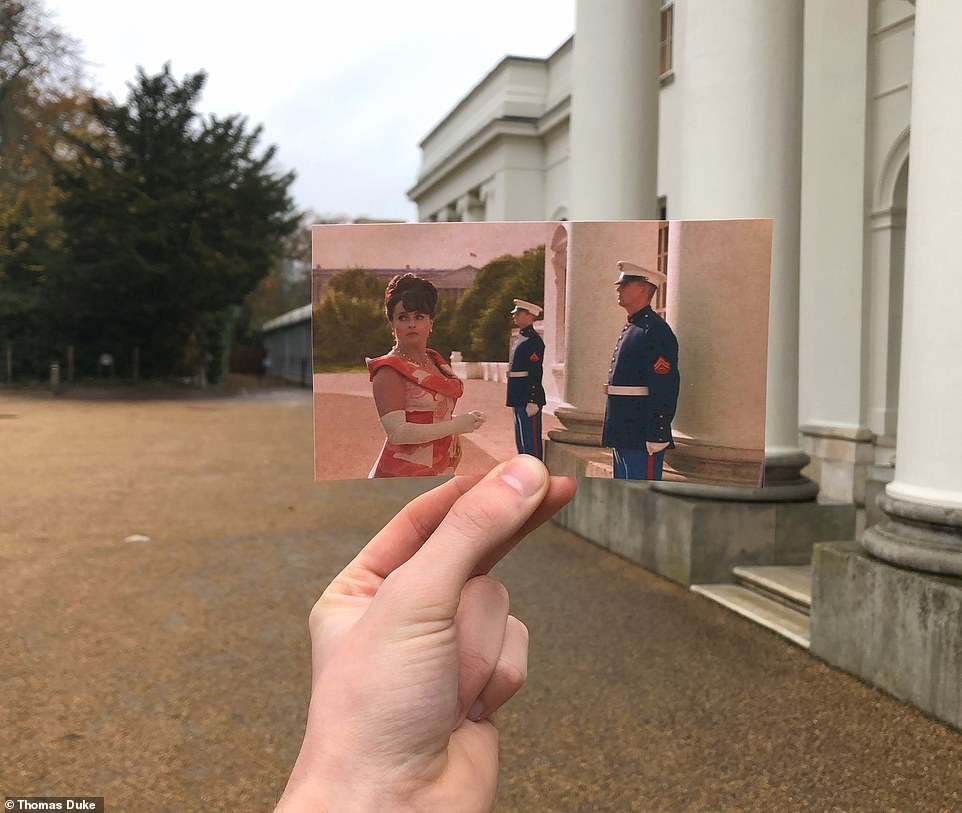 Thomas shot this fascinating picture at Hylands House, a Grade II listed neo-classical villa in Chelmsford in Essex, which doubles as the White House in episode two. In this episode, Princess Margaret, played by Helena Bonham Carter, visits President Lyndon B. Johnson in Washington DC 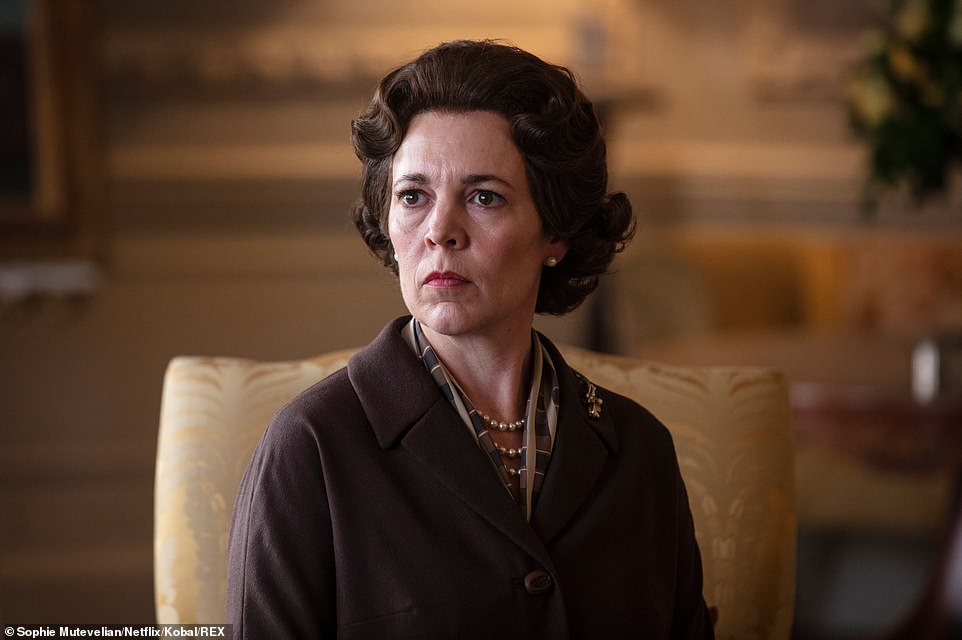 The Crown chronicles the life of Queen Elizabeth II and its third season has just been made available on Netflix. Pictured is the star of the show – Olivia Colman

He explained: ‘I started the account in October 2017. I’d always visited London from a young age and recognised locations and I’ve loved film all my life.

‘I love getting lost in the world of the screen, it’s a little escape from what the world throws at me at times.

‘Film is a priceless art form that transcends so many mediums and allows a community of global proportions to come together and celebrate something we can all love and relate to. I remember waking up every day at 5am when I was five years old, running into our living room, and (annoying everyone) watching Mary Poppins over again and again.