The end of Big W? Three stores shutting down today

The stores closing are in the Sydney suburbs of Chullora, Auburn and Fairfield.

Hundreds of staff will be offered jobs in other Big W stores or Woolworths branches.

The Chullora store is becoming a Coles, the Auburn store is being replaced by an Aldi and the Fairfield store will be a car park.

Big W managing director David Walker said he understood the impact the closures would have on staff.

‘These are not decisions we take lightly and we regret the impact the closures will have on affected team members,’ he told Daily Mail Australia in a statement.

‘We would like to acknowledge the support of the communities of Chullora, Auburn and Fairfield and the hard work and commitment of our store team members.’

‘Supporting our team remains our priority and we are committed to doing the right thing by them.’

‘Over the next six months, we will support our team and explore redeployment opportunities with team members who choose to continue their career at Big W or with other Woolworths Group brands in the months ahead.’

Big W, owned by Woolworths Group, has struggled to be profitable in recent years but said closing the chain entirely was not an option.

Big W owner announced in April it will take a $370million hit as it closes the 30 Big W stores and two distribution centres over the next three years.

The supermarket giant said the move was brought on by ‘current trading and the outlook for the broader sector, including the continued customer shift to online.’

The company has not revealed which other specific stores will close but confirmed distribution centres in Monarto in South Australia and Warwick in Queensland will be shutting down.

There are currently 186 Big W stores across the country which have been around for four decades.

The number of employees of Big W across Australia and Asia was estimated at about 22,000 in 2015.

The 30 stores the brand is closing amount to about 16 per cent of the retailer’s store network.

Woolworths Group CEO Brad Banducci said in a statement earlier this year the company would try to avoid employee layoffs by offering staff ‘alternative employment options’ within the Woolworths Group where possible.

‘This decision will lead to a more robust and sustainable store and DC network that better reflects the rapidly changing retail environment,’ Mr Banducci said.

Big W said they would provide employees at least three months’ notice before the closure of any stores. 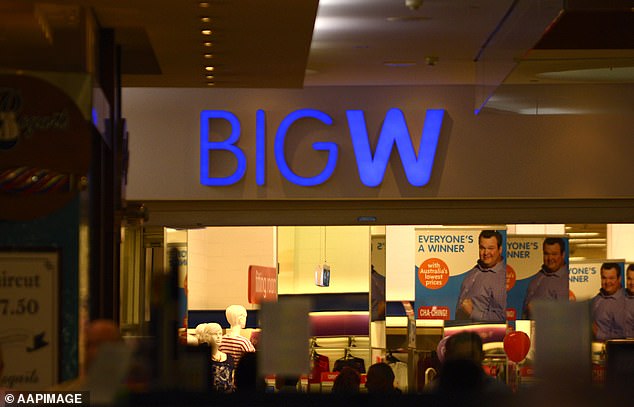