Aussies will pay at least $800 more for airfares to and from Europe because of new green targets required by climate change policies.

German airline Lufthansa said the European Union’s climate targets could cost it $31.4billion in extra costs between now and 2030.

This increase didn’t include the additional expense of new energy-efficient aircraft, she told the panel. 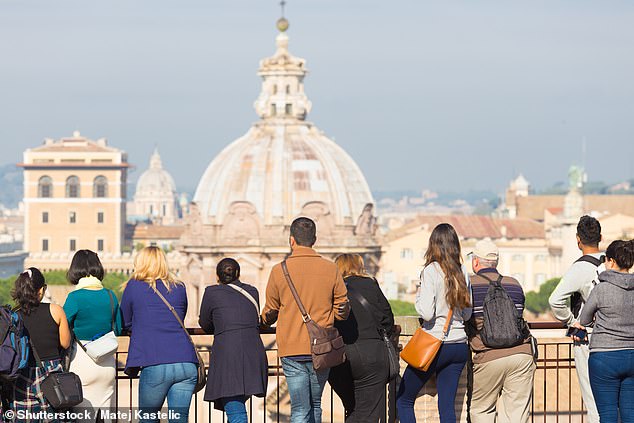 Nearly half a million Aussies visited those Italy, France and Germany in the year to March 2020, while 610,000 went to the United Kingdom. Tourists are pictured above in Rome

The price hikes could affect a million Australians a year.

Italy, France and Germany were among Australians’ favourite 20 overseas destinations for the year to March 2020.

Nearly half a million Aussies visited those three nations, while 610,000 went to the United Kingdom.

Since Brexit, the United Kingdom is no longer officially part of Europe.

Europe has set the goal of becoming the world’s first ‘carbon neutral’ continent by 2050 and its plan is known as the European Green Deal.

As a major step towards that goal, European Commission President Ursula von der Leyen wants Europe to slash its greenhouse gas emissions by 55 per cent by 2030.

By law the commission requires 63 per cent of the aviation industry’s fuel to be sustainable by 2050. 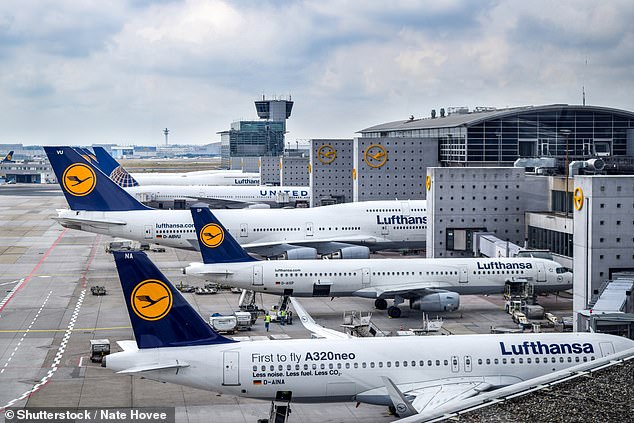 The price hikes will be partly due to the increased costs of Sustainable aviation fuel (SAF), which is far more expensive than standard aviation fuel.

Currently only one per cent of fuel used is SAF.

Ms Mann also said airfares were not ‘afraid’ of setting higher airfares – so long as competitors also faced the same increased costs because of the need to reduce carbon emissions.

Lufthansa is also trialling so-called green hydrogen as a future fuel source – but the technology is thought to be a decade away.

The panel discussed the possibility of bans on air travel where trains are available – as France has done.

The idea was opposed by some of the panel members.