Jeff Flake of Arizona is warning other senators that they have “lit a match” with the “unseemly” confirmation process.

Flake is a key Republican who has yet to announce how he will vote on Kavanaugh.

After he pressed for Thursday’s committee hearing with Ford, Flake said a caller told him to quit getting in the way of President Donald Trump’s court choice. Flake says the caller warned he would take Flake and his family “out.”

Republicans are pushing to confirm Kavanaugh by next week.

Flake says the only certainty about the vote is that the outcome “will forever be steeped in doubt.”

A Democratic senator is suing to block the Senate from voting on the confirmation of Brett Kavanaugh to the Supreme Court.

Jeff Merkley of Oregon contends the Trump administration has interfered with the Senate’s ability to provide advice and consent by withholding documents from Kavanaugh’s tenure working in White House under President George W. Bush.

Merkley wants a federal judge in the nation’s capital to intervene and prevent the confirmation vote until Kavanaugh’s full record is available for public scrutiny. The Senate could vote early next week.

The Trump administration cited executive privilege in withholding about 100,000 pages of documents from Kavanaugh’s time as legal counsel. The administration, saying that disclosure of deliberations and advice would jeopardize a president’s ability to carry out their core constitutional duties.

The Senate could vote on Kavanaugh’s confirmation early next week.

Senate Democratic leader Charles Schumer is urging Brett Kavanaugh to withdraw as nominee for the Supreme Court because of the sexual misconduct allegations against him.

Schumer speak in the Senate after a third woman publicly accused Kavanaugh of sexual misconduct in the early 1980s. Kavanaugh denies the allegation, saying it is from the “Twilight Zone.”

Schumer says there are multiple credible misconduct allegations against Kavanaugh. The New York senator says that if President Donald Trump won’t withdraw Kavanaugh’s nomination, Trump should at least order the FBI to investigate the claims.

The Senate Judiciary Committee says it’s reviewing the new allegations being provided a statement from the new accuser.

Michael Avenatti says he and his client would like to see an FBI investigation.

The Senate Judiciary Committee says it’s reviewing new allegations after Avenatti provided a statement from his client to the committee.

The woman also made other accusations in her statement. The Associated Press hasn’t been able to corroborate them, and continues to investigate.

Avenatti says they expect to release information in “the coming weeks.”

Trump tweets that Avenatti “is a third rate lawyer who is good at making false accusations.”

The lawyer, tweeting back, calls Trump a “habitual liar and complete narcissist” who’s “an embarrassment to our nation.”

Trump claims Avenatti “is just looking for attention and doesn’t want people to look at his past record and relationships – a total low-life!”

Avenatti’s client alleges in a document that Avenatti posted on Twitter that she witnessed Kavanaugh “engage in excessive drinking and inappropriate contact of a sexual nature with women in the early 1980s.”

In a statement Wednesday, Kavanaugh said: “This is ridiculous and from the Twilight Zone. I don’t know who this is and this never happened.”

The Senate Judiciary Committee said Wednesday it is reviewing new allegations after attorney Michael Avenatti provided a statement from his client to the committee.

The woman also made other accusations in her statement. The AP has not been able to corroborate them, and continues to investigate.

Kavanaugh denies having a “sexual or physical encounter of any kind” with Christine Blasey Ford, who will also appear at Thursday’s Senate Judiciary Committee hearing.

“I am innocent of this charge,” Kavanaugh says.

In written testimony released Wednesday by the committee, Kavanaugh says he has “never sexually assaulted anyone -not in high school, not in college, not ever.”

Ford and Kavanaugh are to testify Thursday about her allegations that Kavanaugh held her down, tried to remove her clothes and covered her mouth at a drunken high school party in the 1980s.

Attorney Michael Avenatti provided a statement from his client to the committee.

The woman also made other accusations in her statement. The AP has not been able to corroborate them, and continues to investigate.

Kavanaugh has been accused of sexual misconduct by two other women, putting his nomination for the high court at risk. He and one of the accusers, Christine Blasey Ford, will testify publicly Thursday before the Judiciary Committee.

Avenatti declined to expand on the allegation in an interview Wednesday on ABC’s “The View,” saying he would not add detail beyond what was in the statement. Avenatti also represents Stormy Daniels, an adult film actress who alleges she was paid to keep a sexual relationship with President Donald Trump quiet.

Brett Kavanaugh’s lawyers have submitted his calendars from the summer of 1982 to the Senate Judiciary Committee as part of their defense against a woman’s accusation that he sexually assaulted her at a party.

The green-and-white calendars show detailed notes of Kavanaugh’s plans that summer, including homework, days that he was “grounded,” parties and “beach week” in all capital letters from June 5 to June 11. On June 12, penciled in is his plan to spend the night in Rehoboth, a beach about three hours from Washington.

Also noted are basketball camp and plans to see the movies “Rocky III” and “Poltergeist.”

At the end of August, Kavanaugh plans college interviews, including one for his application to Yale on August 27. He ended up attending that Ivy League School.

President Donald Trump says he would have preferred a faster confirmation process for his Supreme Court nominee.

Speaking to reporters at the United Nations Wednesday, Trump says Senate Republicans “could not be nicer” in their treatment of the woman who claims Judge Brett Kavanaugh sexually assaulted her in high school.

Said Trump: “They could have pushed it through two and a half weeks ago and you wouldn’t be talking about it right now, which is frankly what I would have preferred.”

Senate Republicans are bringing in a veteran Arizona prosecutor to handle questioning about the allegations. Asked about the move, Trump said the lawmakers “could not be nicer” and “could not be more respectful.”

Trump said he was “ok with that,” but again defended Kavanaugh as a “gem.”

An attorney for Supreme Court nominee Brett Kavanaugh says there is no dispute that he drank in high school and college.

Lawyer Beth Wilkinson tells CNN Wednesday that whether or not Kavanaugh drank isn’t the issue. Kavanaugh has been accused of sexual misconduct by two women; one from high school and one from college. He’s denied those allegations.

Kavanaugh said in an interview earlier this week with Fox News that he went to an all-boys Catholic high school where he focused on academics, and athletics. He said he went to church on Sundays and worked on service projects.

But former classmates have disputed that image, saying he was a partier and heavy drinker at times.

Wilkinson said Wednesday: “If this is going to be the standard for how we judge somebody going into public service, I don’t know why anyone in their right mind would want to go through something like this.”

Kavanaugh will testify Thursday before the Senate Judiciary Committee. So will his chief accuser, Christine Blasey Ford, who said he sexually assaulted her in high school.

Lawyers for Christine Blasey Ford say they have submitted sworn affidavits to the Senate Judiciary Committee from four people who say she told them that Supreme Court nominee Brett Kavanaugh had assaulted her in high school.

Kavanaugh has denied the accusation.

The four sworn affidavits are among the information the committee is considering on the eve of Ford and Kavanaugh’s testimony Thursday.

All four documents say that Ford revealed the information well before President Donald Trump nominated Kavanaugh to the high court in July. They come from Ford’s husband and three family friends, who say Ford mentioned the incident in 2012, 2013, 2016 and 2017.

Two affidavits, from Ford’s husband Russell Ford and from the coach of their son’s baseball team, say Ford named Kavanaugh as the alleged assailant. In the other two, Ford did not name Kavanaugh but said she was assaulted by a federal judge.

The attorney for one of the women accusing Supreme Court nominee Brett Kavanaugh of sexual misconduct says the Senate Judiciary Committee has not invited her to tell her story. John Clune, who is representing Deborah Ramirez, says the committee is “refusing even to talk to us.”

Clune says that Republicans did not participate in a pre-arranged Tuesday night conference call to talk about Ramirez’ allegations. He told ABC’s “Good Morning America” that the “only way to get at the truth of what happened” is to interview his client. He said she’d be willing to testify before the committee if asked, but he wasn’t sure whether she would do it without an FBI investigation first.

There was no immediate response by the committee to the AP’s request for comment.

Ramirez told The New Yorker that Kavanaugh exposed himself to her while they were both students at Yale. She has acknowledged consuming alcohol at the time, which clouded some of her memories.

The Senate panel is scheduled to hear from Kavanaugh’s chief accuser, Christine Blasey Ford, on Thursday. She says he assaulted her at a party in high school in the 1980s.

A lawyer for Supreme Court nominee Brett Kavanaugh says the woman who is to testify Thursday about her claim he sexually assaulted her in high school has not turned over key information related to her accusation.

Beth Wilkinson said Wednesday on CBS “This Morning” that the results of Christine Blasey Ford’s polygraph test and her therapist’s notes are not among the materials turned over to the Senate Judiciary Committee on the eve of her testimony.

Wilkinson said: “They announced that there were notes and that there had been a lie detector test” but that those materials were not turned over “even though they were requested.”

Ford is expected to testify Thursday about her allegations that Kavanaugh held her down, tried to remove her clothes and covered her mouth at a drunken high school party in the 1980s.

Kavanaugh denies the allegations. He and Ford are scheduled to testify on Thursday.

Senate Republicans are beginning to schedule votes aimed at putting Brett Kavanaugh on the Supreme Court.

Senate Republicans are bringing in a veteran Arizona prosecutor, Rachel Mitchell, to handle questioning about allegations that Kavanaugh sexually assaulted a fellow teenager in the 1980s.

Mitchell comes from the Maricopa County Attorney’s Office in Phoenix. She is the chief of the Special Victims Division, which covers sex crimes and family violence.

A handful of undeclared GOP moderates leave Kavanaugh’s fate uncertain because the party runs the Senate with just a 51-49 advantage. There’s no telling how Kavanaugh and his accuser, Christine Blasey Ford, will perform at the hearing. 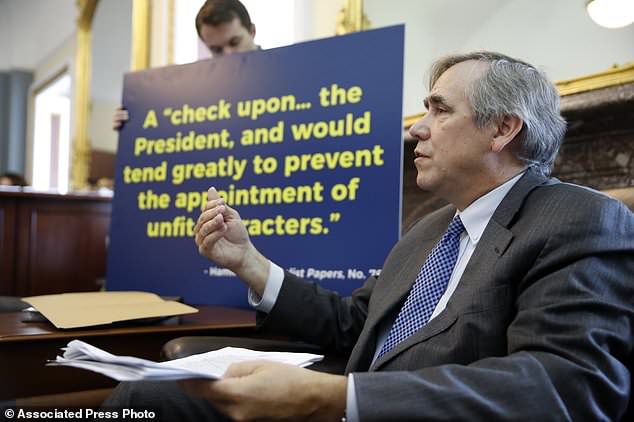 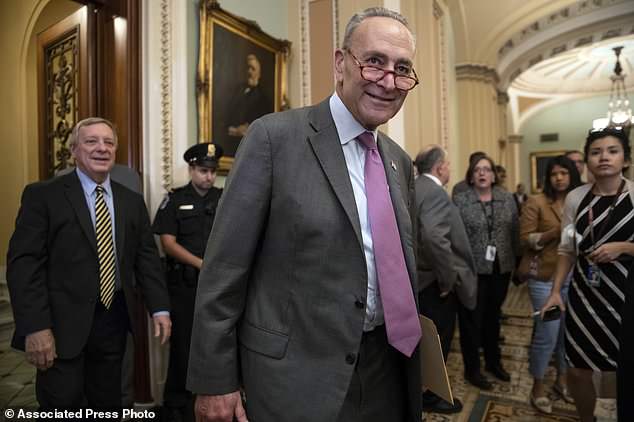 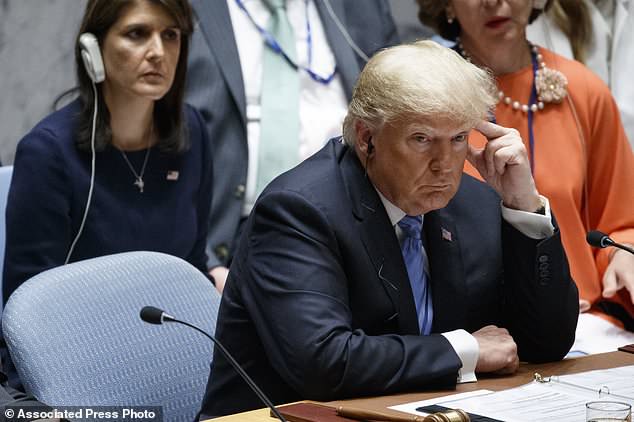