When Bettie Mae Page retired at the height of her fame in 1957, she went under the radar for decades and now those tumultuous times are being documented for all the world to see in a new book out by Page’s social media manager, and her nephew.

Author Tori Rodriguez and illustrator Ronald Charles Brem joined forces to bring Page’s secret life to light in ‘Bettie Page: The Lost Years: An Intimate Look at the Queen of Pinups, through her Private Letters & Never-Published Photos,’ which was released in October.

The book features never-before-seen photos of the model, as well as 29 letters between Bettie and her sister and Brem’s mother, Goldie Jane Page.

The pictures and messages chronicle a time in Bettie’s life when the famed pinup refused to be photographed, struggled with mental health issues like schizophrenia, had multiple run-ins with the law and opened up to family about having a hard time with aging before she died at 85 in 2008.

When Bettie Mae Page retired at the height of her fame in 1957, she went under the radar for decades and now those tumultuous times are being documented for all the world to see in a new book out by Page’s social media manager, and her nephew. Bettie is pictured circa 1955

Bettie was born in 1923 in Nashville, Tennessee, and rose to fame in the 1950s for her swimwear and fetish modeling.

Known as the ‘Queen of Pinups,’ her measurements have been reported as the impossible sounding 36-23-35 (bust-waist-hips, in inches), making her the stuff of post-World War II era dreams. For the most part, people either lusted after her or wanted to be her and she has been attributed with helping to usher in the sexual revolution of the 1960s.

One of the first centerfolds for Playboy Magazine, Bettie appeared in on its pages in January of 1955 wearing a Santa hat, and nothing else, which has largely been credited as her ‘big break.’

But with that fame also came criticism, like becoming the target of federal anti-pornography investigators following bondage shoots with brother-sister photographer duo Irving and Paula Klaw. 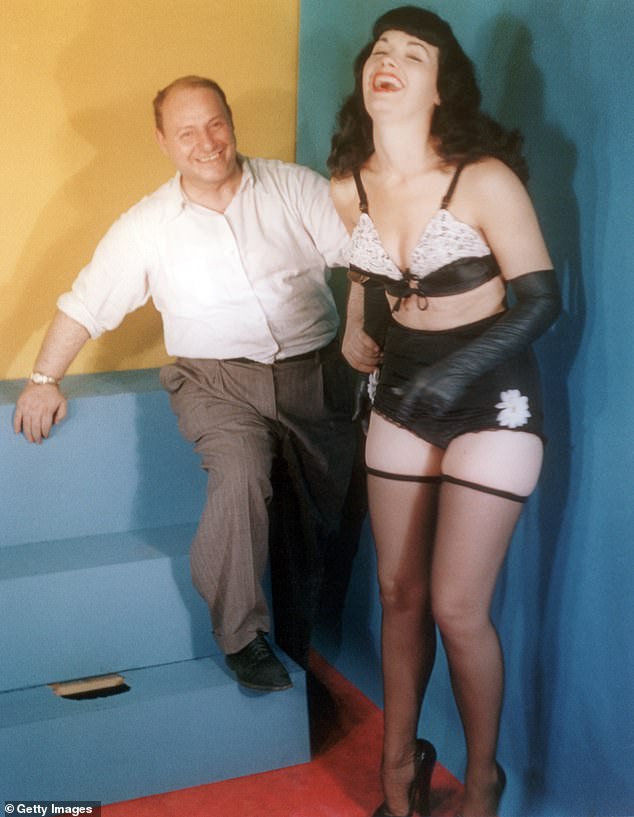 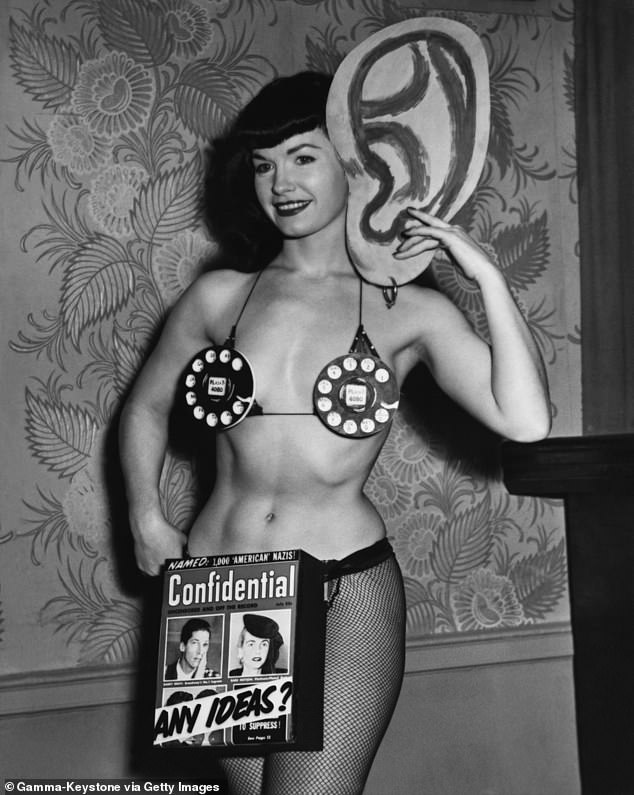 Known as the ‘Queen of Pinups,’ her measurements have been reported as the impossible sounding 36-23-35 (bust-waist-hips, in inches), making her the stuff of post-World War II era dreams. Bettie is shown in the 1940s posing for Confidential Advertising

Her sister, Goldie, was a few years younger and also dabbled in the entertainment world, working as a burlesque dancer, though not to nearly the same level of notoriety.

‘They were incredibly close,’ Rodriguez told Fox News, of the Page sisters. ‘It’s almost like they were twins. They looked alike, they were close in age, had pretty much the same interests and learned how to pose together. They both wanted to be models.

‘Ron had talked about that there was a bit of a rivalry there in terms of modeling. He said Bettie would get a bit jealous when photographers would pay more attention to Goldie on shoots. And that Goldie was jealous of Bettie’s growing popularity in the modeling world. But overall, they were very supportive of each other.’

Ultimately, as Bettie’s star rose, Goldie hung up her tassels in favor of a calmer life as an art teacher and mom to Brem with the husband she found while performing a strip tease in 1956.

Not long after and seemingly out of nowhere, Bettie fled the spotlight in favor of a life of isolation for the next three decades. 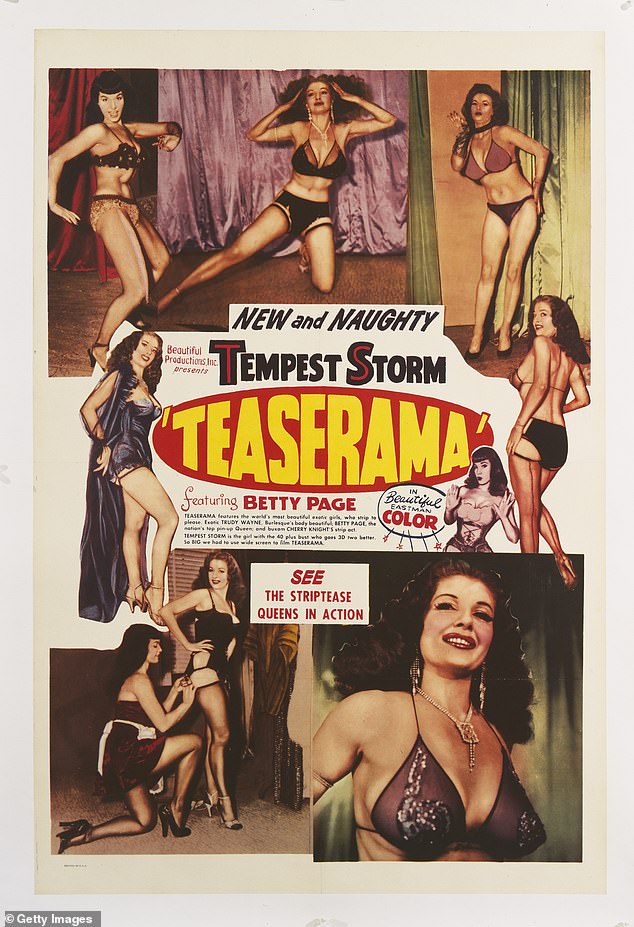 Her sister, Goldie, was a few years younger and also dabbled in the entertainment world, working as a burlesque dancer, though not to nearly the same level of notoriety. Bettie is shown among the burlesque performers in the film ‘Tempest Storm – Teaserama’ from 1955

When Bettie finally emerged from her seclusion, she recorded narration for the documentary, ‘Bettie Page Reveals All,’ but only her voice would make it into the show, which wasn’t released until after her death.

When Goldie died at the age of 78 in 2004, she left behind many belongs for her son, Brem, to sort through, and when he finally did, secrets from the sisters’ lives came flooding forward.

‘Goldie went to great lengths to preserve these letters and photos,’ Rodriguez said.

The notes show a candid side of Bettie, revealing that she had a hard time with the realities of growing older, possibly driving her to avoid the camera.

‘She did have a problem with the weight that she gained as she aged, and just aging in general,’ Rodriguez said.

‘If you look at what happened to Bettie in particular as she aged… She was having more frequent psychotic breaks, she would develop this terrible arthritis throughout her life, she was having lots of other health issues and health scares. And so, you understand why someone would think, “My God, if this is aging, to hell with it.”

Rodriguez continued: ‘She would plainly state that “I’ve been so depressed I ate everything in sight,” things like that. So she’s clearly stating that she was an emotional eater.’

At the time, Bettie’s many fans wondered where she had gone, with Penthouse magazine going so far as to offer a $1,000 reward for anyone who could prove whether she was alive and provide information about her whereabouts in 1996, according to the Chicago Tribune.

All the while, Bettie was fighting a battle with mental illness, set against the backdrop of a culture that wasn’t very in tune with its prevalence.

In the 1970s, Bettie’s third and final husband Harry Lear alleged the retired performer to have taken part in several violent outbursts. Lear accused Bettie of shouting about the ‘retributions of God’ while waving a .22-caliber pistol around a ministry retreat in Boca Raton, Florida in January of 1972, according to a Time Magazine article headlined as ‘the felonious Bettie Page.’

Three months later in April, Lear accused Bettie of forcing him and his two children to pray before a portrait of Jesus while she held a knife.

Charged with breach of the peace, Bettie was confined in Jackson Memorial Hospital for four months. 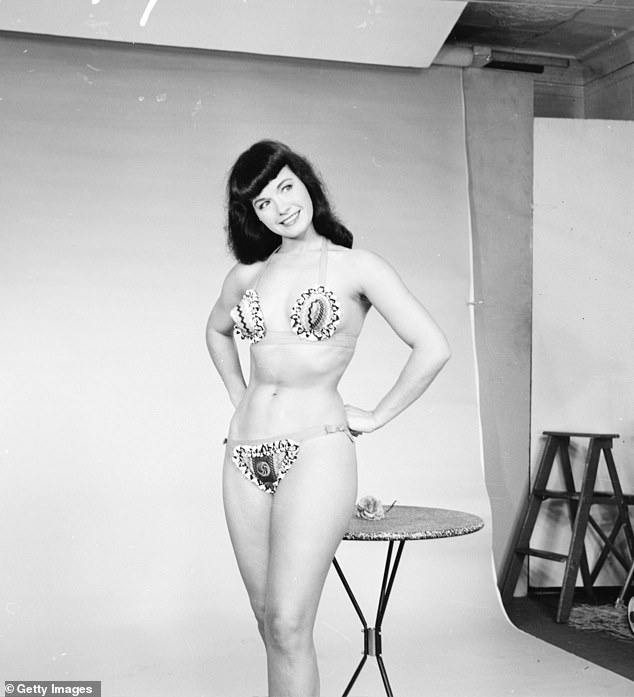 Around 1957, Bettie fled the spotlight in favor of a life of isolation for the next three decades, which saw her battle mental illness and multiple run-ins with the law. Bettie is pictured at a photo shoot in the 1950s 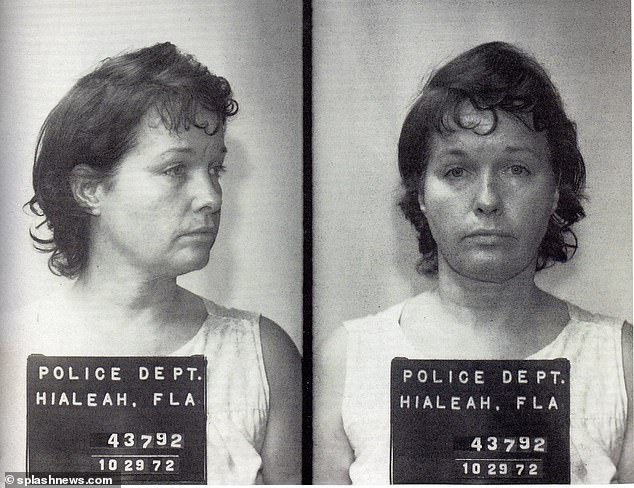 Bettie is shown in a booking photo from October 29, 1972 at the Hialeah, Florida police station

At another point throughout that particularly tumultuous year, Bettie was also charged with two counts of assault with a deadly weapon after being accused of attacking her landlord with a knife. She was found not guilty by reasons of insanity.

Bettie later recommitted herself in October of that same year for six months more. She was reportedly under suicide watch at that time.

‘In her time, there was a strong stigma around mental health, particularly with severe mental illness like schizophrenia,’ Rodriguez said.

‘It was just not talked about. I even brought it up in the book that Bettie never says, “I was diagnosed with schizophrenia.” She never mentions that world. She talks about a nervous strain and emotional turmoil, those sorts of things. … But she definitely does have this paranoid schizophrenia that she was said to be diagnosed with.’

Bettie also lived most of her life during a time when the side effects of drugs she may have been taking might have contributed to her physical insecurities, without her knowledge.

‘I’m really curious about whether and how much [antipsychotic drugs] affected her weight,’ Rodriguez said, noting the medications are well-known to have weight gain as a side-effect. ‘I don’t know if that was common knowledge back then. She might not have had the awareness, that it could be affecting her weight.’

Rodriguez said she hopes her book, together with Brem, will help readers gain an understanding of the the many ups and downs Page endured in her life, both privately and publicly, and that through it all, she remained a woman with dreams of a brighter future.

‘She struggled with a lot of the same issues other people are faced with. But she always maintained this stubborn optimism in the face of everything that life threw her way,’ Rodriguez asid.

‘Even through multiple hospitalizations and years of poverty and disappointment, she still got back up and hoped for more. She always kept planning a new path for herself.’

Bettie died in 2008 at the age of 85 after a three-week hospital stay related to pneumonia, before suffering a heart attack and slipping into a coma.

She passed away at the Kindred Hospital and is buried at Pierce Brothers Westwood Village Memorial Park and Mortuary, both in Los Angeles. 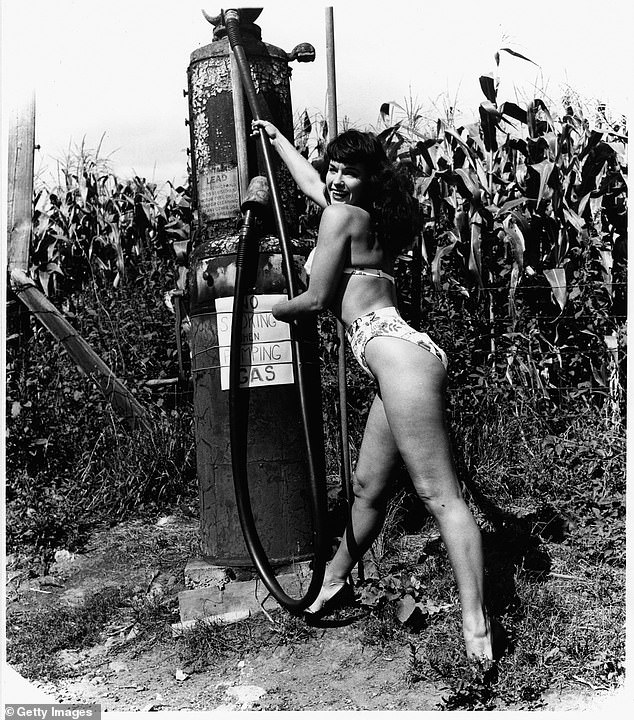 Bettie died in 2008 at the age of 85 after a three-week hospital stay related to pneumonia, before suffering a heart attack and slipping into a coma. Bettie is shown at a photo shoot in New York City in 1956