Celeb-approved morning shake packed with spinach, mango and oat milk tastes like WHITE CHOCOLATE – and you need just six ingredients to make it at home

The recipe, which was first shared by British celebrity stylist Angie Smith on Instagram, is called the ‘fraud shake’ and is loved by Rochelle Humes, Frankie Bridge and Millie Mackintosh.

The bright green drink is made of spinach, peanut butter, honey, water, oat milk and mango and has been made and shared online by dozens of Instagram users who are getting creative in the kitchen amid the coronavirus lockdown. 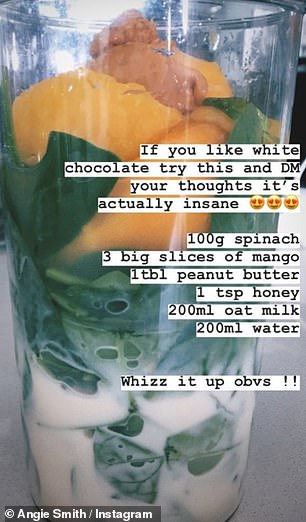 Instagram users are going wild for a very healthy smoothie that taste just like white chocolate. The recipe, which was first shared by celebrity stylist Angie Smith (pictured left), is called the ‘fraud shake’ and is loved by Rochelle Humes, Vogue Williams and Millie Mackintosh (recipe right)

How to make the ‘fraud shake’

TIP: If you don’t have oat milk, mix water and two tablespoons of oats

Angie, who is living in Sydney and names Holly Willoughby and Davina McCall among her famous clients, added that you can pre-freeze the ingridients to make the shake at a later date.

Others making the smoothie put their own twist on the popular shake, with some adding protein powder, extra oats or honey.

One fan is Rochelle Humes, who tried the drink with her daughter Alaia-Mai, six.

In a sweet clip shared on his Instagram story, the former Saturdays star, 31, said ‘Angie has promised this will taste like white chocolate, let’s try it’. 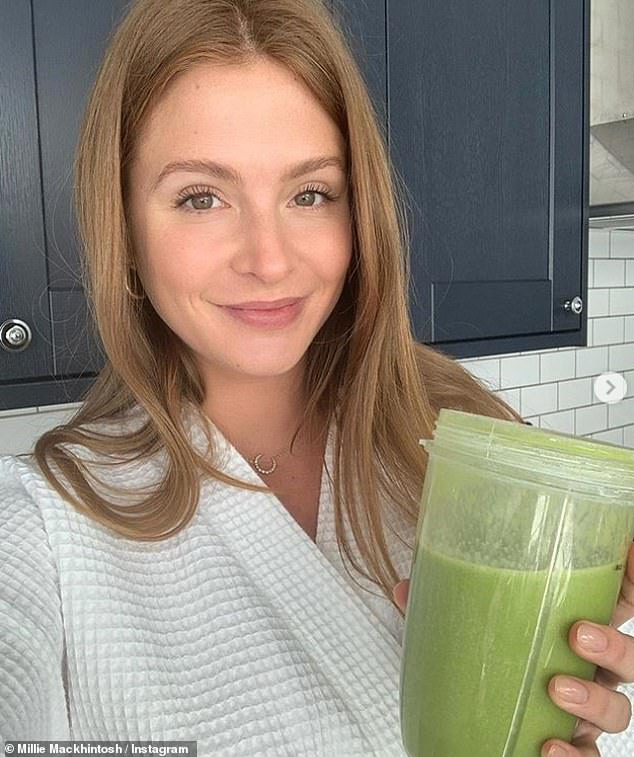 Millie Mackintosh, who shared the recipe on her Instagram and said it is a favourite snack 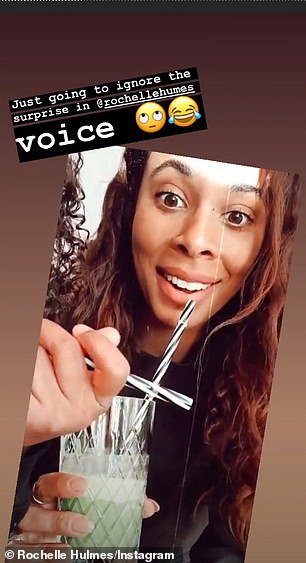 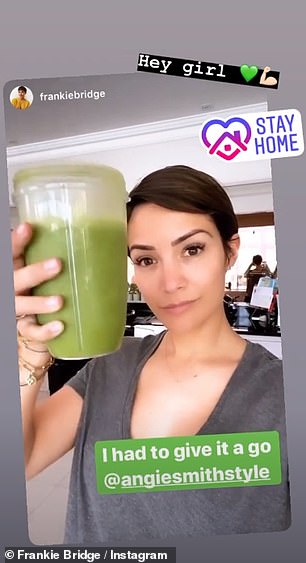 One fan is Rochelle Humes (left) who tried the drink with her daughter Alaia-Mai, six.  Rochelle’s former S Club Juniors and Saturdays bandmate Frankie Bridge (right) is also a fan. The mum-of-two shared a snap of her sipping the shake this morning. 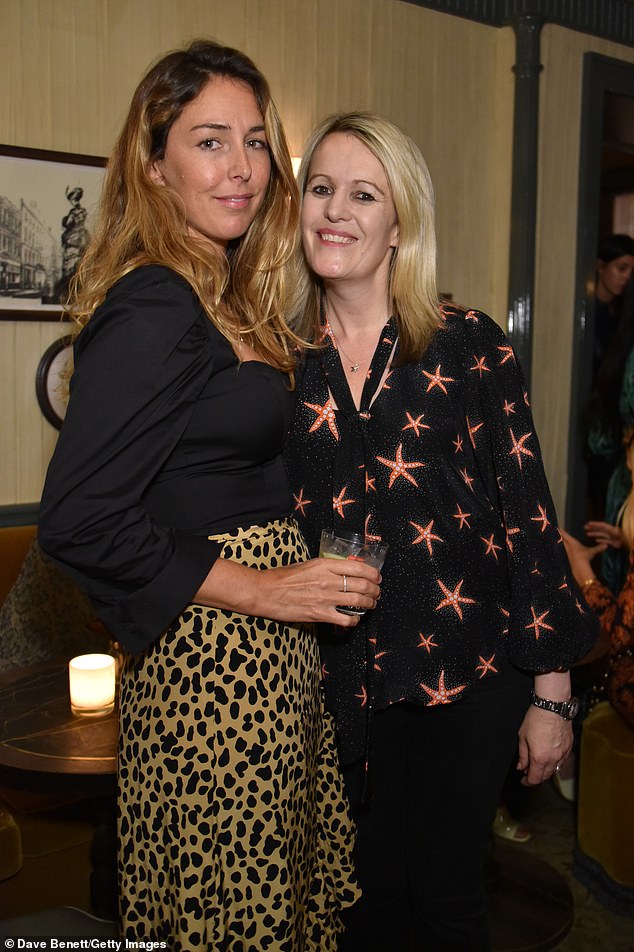 While she’s currently taking Instagram by storm with her recipes, Angie is best known as a stylist. She is pictured left at an event last year

I have a freezer full of frozen fruit and veg which I buy and tell myself I’m going to use to make a healthy smoothie – but I can never quite emulate what I once bought from Joe & the Juice before coranavirus locked us all indoors. 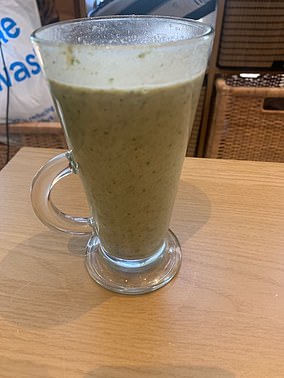 Hearing about a smoothie that taste like white chocolate instead of green mulch but was full of vitamins instead of sugar, I thought I’d give it a go and dusted off my nutribullet.

I already had a bag of spinach and mango smoothie mix and whacked it in with the rest of the ingredients. I have to substitute the peanut butter for almond butter and I was impressed with the result.

You can definitely tell it’s spinach-based, due to the bitty texture, but maybe that would change with a bit more blending.

But the flavour was sweet, but not overpowering, and definitely tasted like something that  you’d pay a premium for in a trendy juice bar. Overall I’m pleased but I would make less next time, as Angie’s recipe made enough for two massive portions.

After blending all the ingredients together, both Rochelle and her daughter seemed impressed with the shake saying it did taste like white chocolate.

Other celebrity fans include Millie Mackintosh, who reshared the recipe on her Instagram.

Sharing a picture of her sipping on the shake, the mother-to-be wrote: ‘ I shared this smoothie recipe on my stories last week and I keep getting messages asking how to make it.

‘I got inspired to make one after Angie Smith posted saying it tasted like white chocolate and it really does!

‘I am now addicted, the below makes one big portion but I think it’s the perfect amount for two people. It’s my new favourite mid morning snack and Hugo is a big fan too. Have you tried it yet? 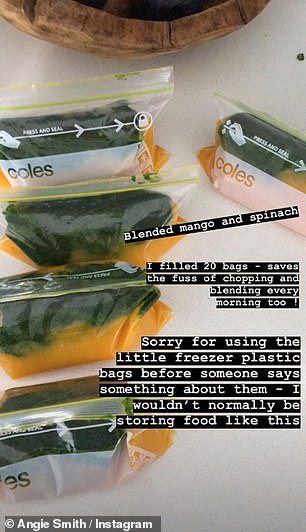 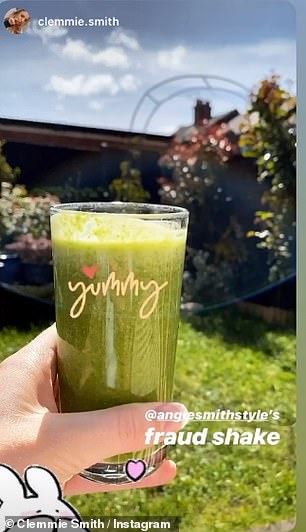 Angie also revealed you can freeze the ingredients and save them for later. Right, the smoothie 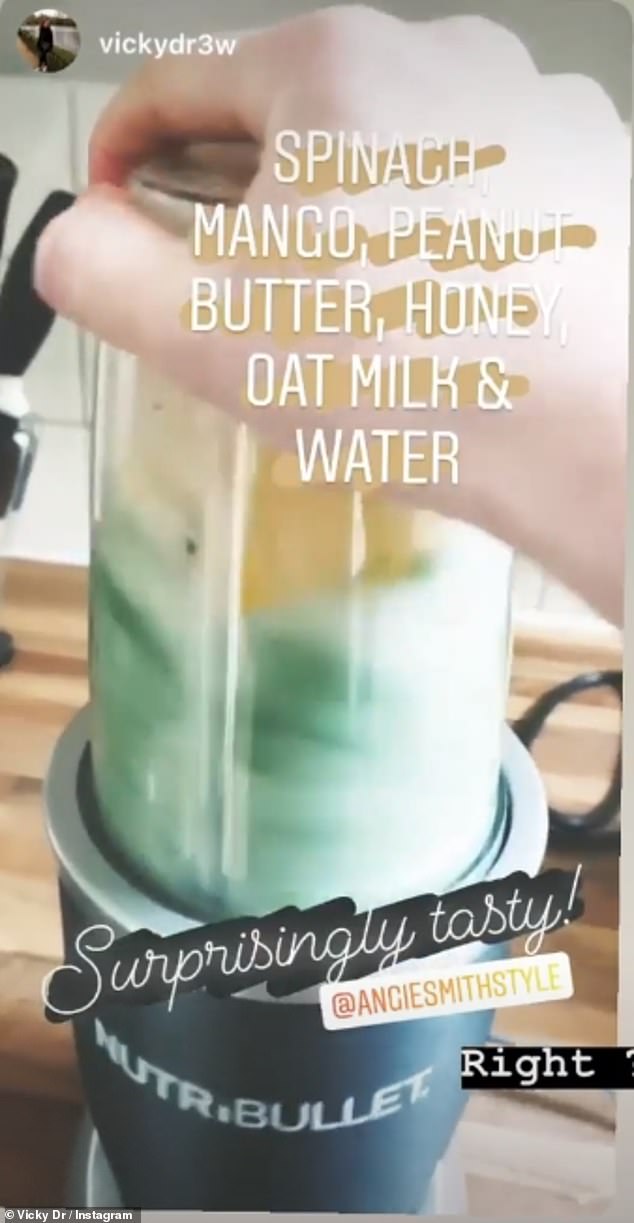