Seventy years ago, a girl walked through a wardrobe into a land called Narnia. Little girls and boys have been trying to find their way there ever since The Lion, The Witch And The Wardrobe, by C. S. Lewis, was published in October 1950. Grown-ups, too.

But I haven’t been scratching around in wardrobes; not even in the Lewis family wardrobe, which found its way to a college in Wheaton, Illinois. There are other ways to find Narnia. It just requires legwork.

I have been painstakingly recreating the walks C. S. Lewis took in his native Ireland and his adopted England. He loved walking. His great friend, fellow Oxford don and fellow author J. R. R.Tolkien complained about the ‘ruthless’ pace C. S. ‘Jack’ Lewis set. Luckily for me, Lewis also loved his beer. A walk wasn’t a walk if it didn’t finish at an inn — and I’ve had a jolly time discovering which of his favourite hostelries are still standing.

STARTING IN THE SURREY HILLS

During World War I, the teenage C. S. Lewis lived in Surrey and would tramp the Surrey Hills. Pictured is the view from the top of Leith Hill

To find Narnia, I started in Surrey. During World War I, the teenage C. S. Lewis lived in a cottage called Gastons, in the village of Great Bookham, near Leatherhead, with his tutor, a fierce character named W. T. Kirkpatrick.

In November 1914 he wrote to a friend about a heavy snowfall that was covering the pinewoods near the house: ‘One almost expects a march of dwarves to come dashing past!’

At around this time, an odd image occurred to him: that of a faun — a mythological creature, half-human, half goat — walking through a wood carrying a brown paper parcel and an umbrella. That was the seed for the whole Narnia series: the first character Lucy meets is Mr Tumnus, a faun carrying parcels and an umbrella. And Kirkpatrick became Professor Kirke, the eccentric owner of the house where the children’s adventures begin.

Gastons is long gone, replaced by a suburban cul-de-sac called Fairlawn. But the Surrey Hills around which Lewis tramped are untouched — and what a discovery they will be for anyone who had the impression the county was all footballers’ mansions and golf clubs.

A friend and I walked 12 miles from Sutton Abinger to Friday Street, up Leith Hill and Holmbury Hill. We saw seven cars in that time — and one pub that Lewis surely enjoyed: The Abinger Hatch.

OPENING THE DOOR ON ENCHANTING BELFAST 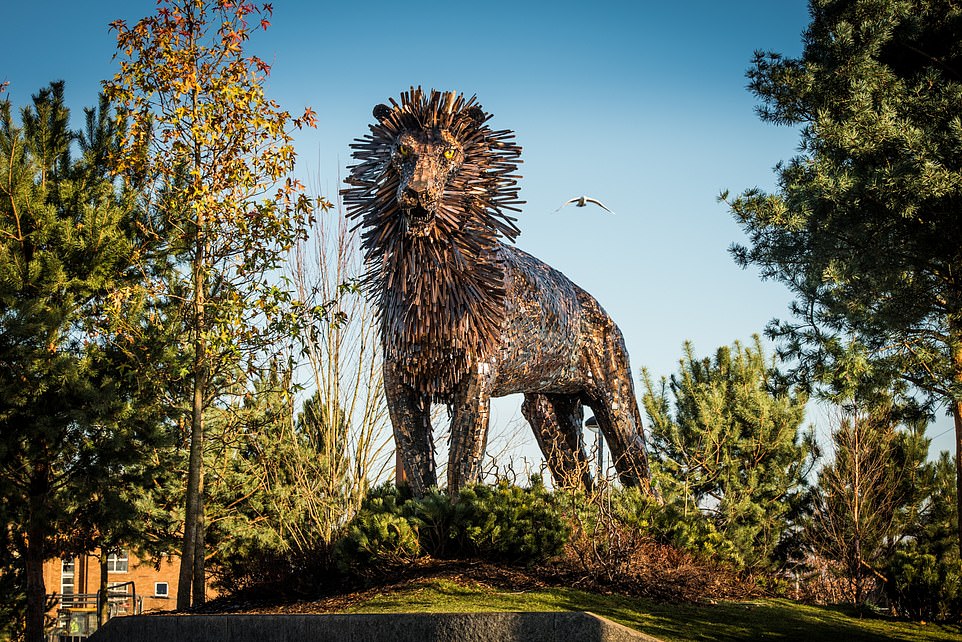 C. S. Lewis was born in Belfast in 1898 and the Narnia business is going strong in Northern Ireland. Pictured is the lion sculpture in C. S. Lewis Square in the city

C. S. Lewis was born in Belfast in 1898. The Narnia business is going strong in Northern Ireland, whereas VisitEngland seems uninterested in an author who has sold more than 100 million books.

I recommend Sandy Smith’s C. S. Lewis tour. It begins in the author’s birthplace of Dundela (then a village, now a suburb of Belfast) and ends, fittingly, in C. S. Lewis Square.

It’s a cheerful place, an inner city children’s playground dotted with Narnia sculptures, including Aslan. The highlight is Ross Wilson’s Wardrobe sculpture, which captures all the magic of that first entry into another world. 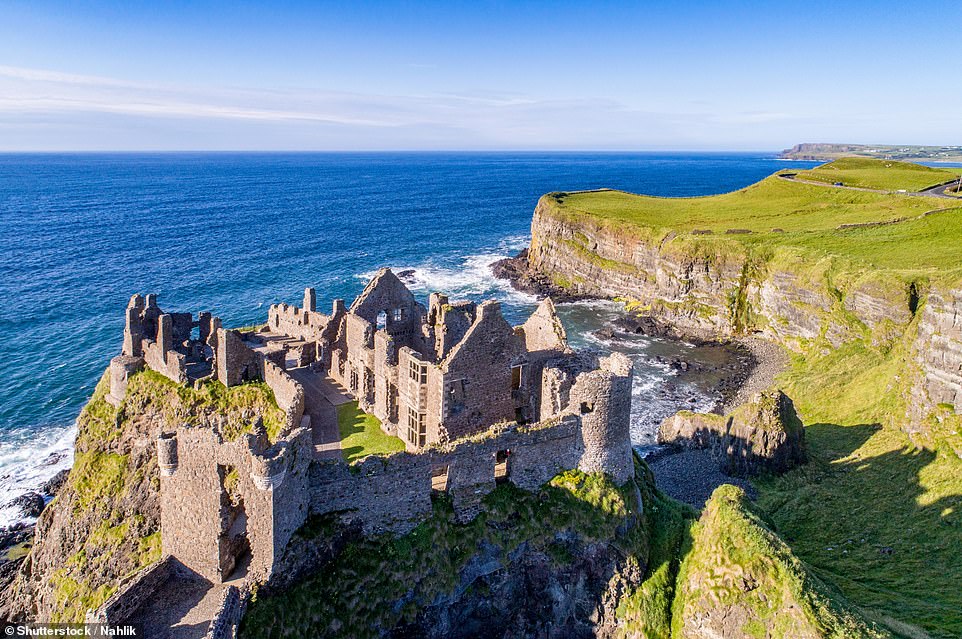 Mystical: Dunluce Castle, which several Lewis scholars believe is the model for Cair Paravel, where the four children of the Narnia stories reign as kings and queens 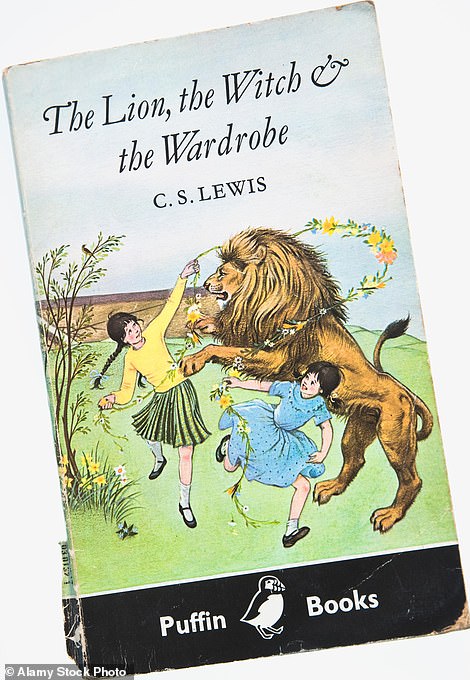 The Lion, The Witch And The Wardrobe was first published in October 1950

Rostrevor is a village deep in the Mountains of Mourne in the south of County Down. It was a favourite holiday destination of the Lewis family — and now a Narnia Trail has gone up in the local park. I expected to feel sniffy about it but the hidden sculptures of castles, beavers and lions are delightful and, if I were a few feet shorter and several decades younger, would be genuinely thrilling.

Grown-ups should walk the Cloughmore Trail, starting a ten-minute drive above Rostrevor. The pinewoods lead to a landscape of granite boulders and heather, with wonderful views of the coast and borderlands. You half expect a talking badger to emerge, especially if you have been enjoying the fine beer at the Rostrevor Inn.

Then head northeast to take a journey along the Antrim coast. Lewis loved the seaside village of Castlerock: he and his brother Warnie would brave the seas there that were freezing even in August.

But the real jewel is near the village of Bushmills: Dunluce Castle. This imposing medieval ruin stands high on the cliffs overlooking sparkling waters and long sandy beaches.

Several Lewis scholars believe — as I do — that Dunluce is the model for Cair Paravel, where the four children of the Narnia stories reign as kings and queens.

NARNIA IN THE HOLYWOOD HILLS 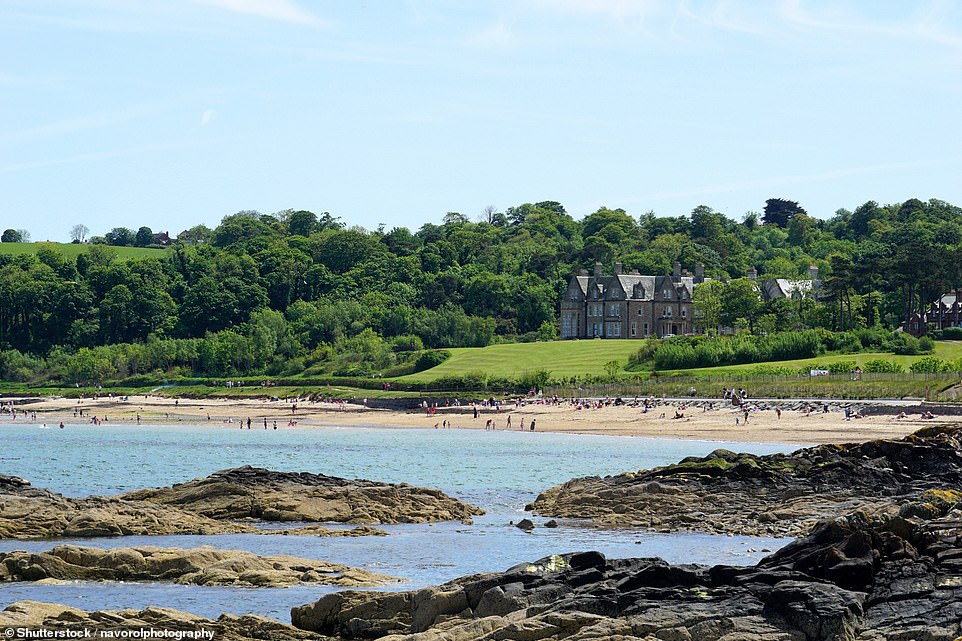 The sweet seaside village of Crawfordsburn in the Holywood Hills. Lewis enjoyed a belated honeymoon here with his wife Joy in 1958

Just ten miles northeast of Belfast, Crawfordsburn is a sweet seaside village in the Holywood Hills. Walking along the sunny, sandy shore, I thought of the Lone Islands in The Voyage of the Dawn Treader. The Crawfordsburn Inn was a favourite haunt of C. S. Lewis’s.

He returned in 1958 with his wife, Joy, for a belated honeymoon.

Joy had less than two years to live and they were (in his words) ‘drunk on blue mountains, yellow beaches [and] dark fuchsia’.

It is a poignant place to remember the most unlikely of middle-aged love stories, captured (sort of) in the film Shadowlands. 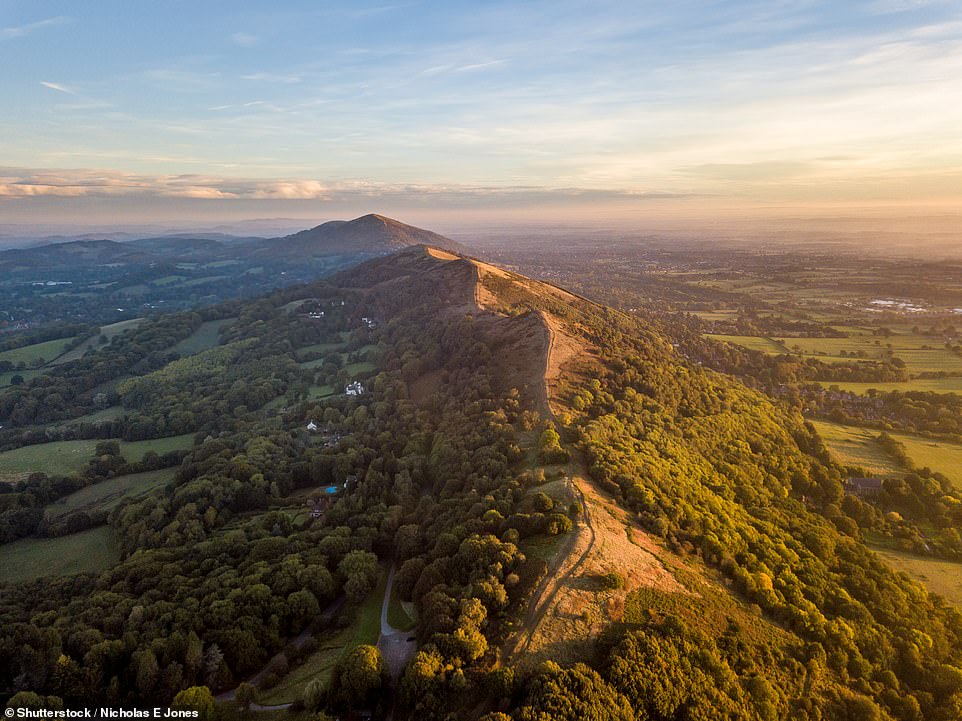 Lewis was miserable at Malvern College. But it was after tramping in the Malvern Hills, pictured, that he ‘made his peace’ with the English countryside

Lewis didn’t find much enchantment in England. ‘Featureless …imprisoning, suffocating!’ was the verdict of this boy of cliffs, loughs and beaches as he took the train south from Liverpool.

He was miserable at school in Watford and at Malvern College. But it was after tramping in the Malvern Hills that he ‘made his peace’ with the English countryside, and he would return to Malvern frequently.

I walked up to the Worcestershire Beacon above the town of Malvern with an old schoolfriend — he a Lord Of The Rings nut, me a lifelong devotee of Narnia.

At the end of the trail, we found The Unicorn pub and the very table where Tolkien and Lewis sat.

All over Malvern are distinctive Victorian gas lamps, which local historians claim inspired the one in Lucy’s wood. Mind you, Sandy Smith also showed me a ‘Narnia’ lamppost outside Campbell College in Belfast.

From the 1,400 ft summit of the Beacon you can see 13 counties: west to Herefordshire and the Welsh borders, south to Somerset, east to Salisbury Plain and into Oxfordshire, Lewis’s home from the 1920s until his death in November 1963.

In the books, the children twice cross Narnia — once on the back of the lion Aslan and once on a flying horse. If I had a flying horse, this is where we’d take off: the true Narnian heartland.

TRAVEL NOTES – WHERE TO GO AND WHERE TO AVOID 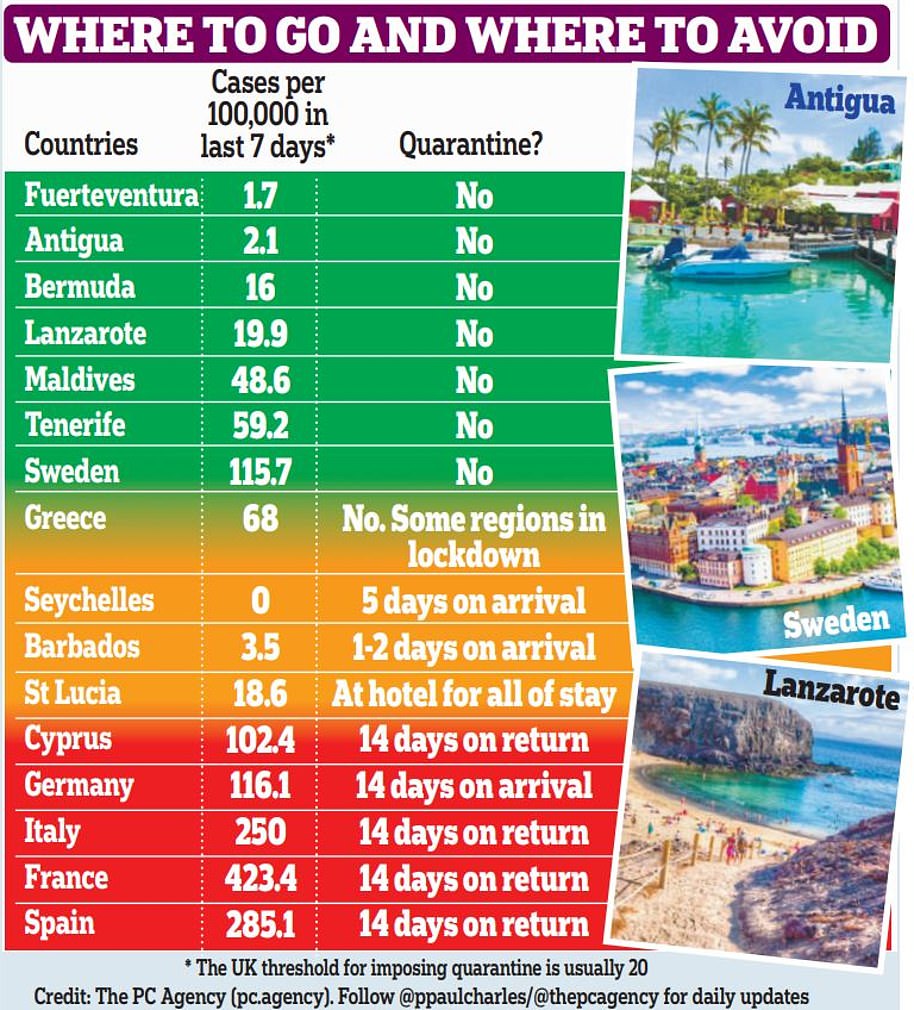 Cyprus and Lithuania are now on the UK’s quarantine list. From 4am tomorrow returning travellers will have to self-isolate for two weeks.

No countries have been put on the safe list since the Canary Islands, Maldives and Denmark were added last week.

France is now in national lockdown as are regions of Greece, including Thessaloniki. In Europe, Sweden looks the best bet for UK travellers.

A London dry gin has been created to support Covid-19 hit hotel, restaurants, bars and their people. All profits from £37 Hospitality Gin will go to The Drinks Trust and Hospitality Action, which has handed out £750,000 in the pandemic so far. Visit hospitalitygin.co.uk.

It is also offering up to £125 off beach holidays in Cyprus, Greece and Turkey for travel between January 1 and October 14. Customers need to book by midnight on Monday.

Thomas Cook has set up an online travel money service with the option of receiving freshly printed, virus-free Euros and U.S. Dollars. The service will also have an app and provide more than 50 currencies covering 98 per cent of world destinations.

A Clever Currency Toolkit will allow customers to set exchange-rate targets or alert users when rates are high. Visit thomascook.com.