Long before planets formed in the solar system, the Sun had rings, similar to those around Saturn, and they may have stopped Earth getting any bigger, study claims.

These rings have been seen around a number of Sun-like young, distant stars, according to astronomers from Rice University in Houston, Texas.

Made up of bands of dust and gas, they likely orbited the young Sun and played a role int he formation of the Earth, potentially stopping it growing into a type of world known as a ‘Super Earth’ that has been found in 30 per cent of star systems.

‘In the solar system, something happened to prevent the Earth from growing to become a much larger type of terrestrial planet,’ said author André Izidoro.

Izidoro and colleagues used a supercomputer to simulate the solar system’s formation hundreds of times, to better understand how it came to be.

Their model produced rings and faithfully reproduced several features of the solar system missed by many previous models, but required rings around the young sun.

The addition of false colour to an image captured by the Atacama Large Millimeter/submillimeter Array, or ALMA, reveals a series of rings around a young star named HD163296

WHAT DID THE COMPUTER MODELS PRODUCE

Astrophysicists used a supercomputer to create a model of the solar system formation – with the goal of producing something close to the real thing.

This would allow them to predict how the system formed, and looked when first forming.

To get close to the solar system we know today, their model required the Sun to have rings when it was young.

This produced a system with:

The study involved a team of astronomers, astrophysicists and planetary scientists, drawing on the latest research on infant star systems.

The model they created assumes the early solar system had three bands of high pressure within the disc.

These pressure pumps have been seen in ringed stellar disks around distant stars.

They found that pressure bumps and rings can account for the solar system’s architecture we see today, including the absence of ‘Super Earth’ worlds.

‘If super-Earths are super-common, why don’t we have one in the solar system?’ Izidoro said.

Scientists have predicted for the past few decades that gas and dust in protoplanetary discs gradually became less dense, dropping smoothly as a function of distance from the star.

However, previous computer simulations show planets are unlikely to form under those scenarios.

‘In a smooth disk, all solid particles — dust grains or boulders — should be drawn inward very quickly and lost in the star,’ said astronomer and study co-author Andrea Isella.

‘One needs something to stop them in order to give them time to grow into planets.’

As particles move faster than the gas around them, they ‘feel a headwind and drift very quickly towards the star’, according to Izidoro.

‘That’s what allows dust particles to accumulate at pressure bumps,’ he said.

This is an enormous 66-dish radio telescope that came online in Chile in 2013. 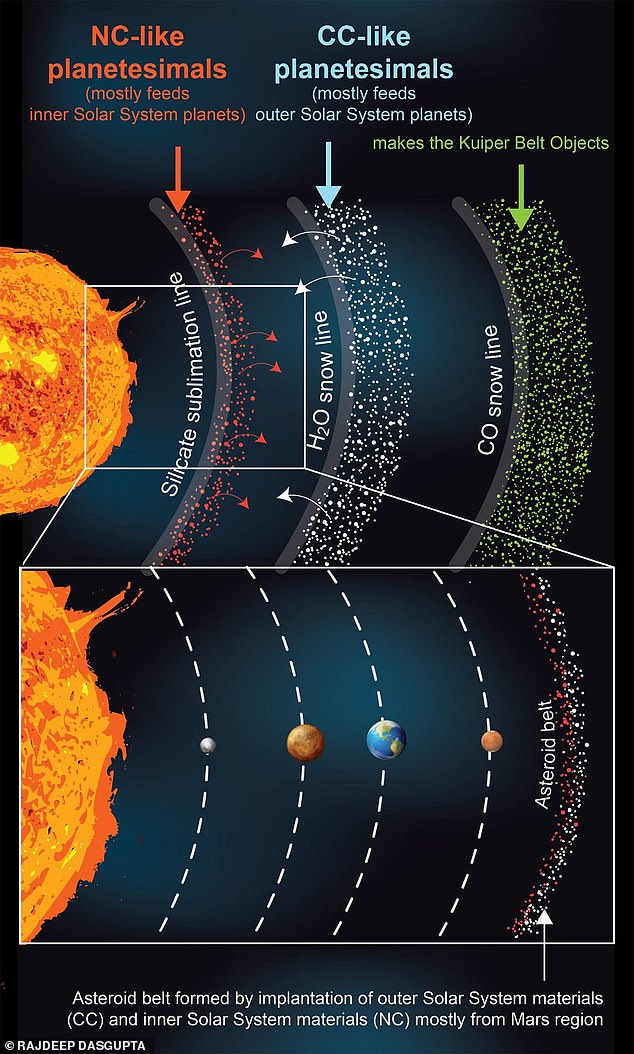 An illustration of three distinct, planetesimal-forming rings that could have produced the planets and other features of the solar system, according to a computational model from Rice University

WHAT IS A SUPER-EARTH EXOPLANET?

Super-Earths – a class of planets unlike any in our solar system – are more massive than Earth yet lighter than ice giants like Neptune and Uranus.

They can be made of gas, rock or a combination of both.

They are between twice the size of Earth and up to 10 times its mass.

‘The true nature of these planets remains shrouded in uncertainty because we have nothing like them in our own solar system,’ said NASA.

‘And yet, they are common among planets found so far in our galaxy.’

Over the last three decades, astronomers have discovered all kinds of strange planets with no solar system equivalent.

It isn’t clear how large a super-Earth can get before it no longer has a rocky surface and becomes a gas world.

In the range of 3-10 times the mass of Earth, there might be a wide variety of planetary compositions, including water worlds, snowball planets, or planets that, like Neptune, are composed largely of dense gas.

Exoplanets at the upper limits of the super-Earth size limit can also be referred to as sub-Neptunes.

‘ALMA is capable of taking very sharp images of young planetary systems that are still forming, and we have discovered that a lot of the protoplanetary disks in these systems are characterized by rings,’ Isella said.

‘The effect of the pressure bump is that it collects dust particles, and that’s why we see rings. These rings are regions where you have more dust particles than in the gaps between rings.’

This new model, created by Izidoro and colleagues, works on the assumption that pressure bumps formed in the early solar system at three places.

These are where sunward-falling particles would have released large amounts of vaporised gas, they found.

‘It’s just a function of distance from the star, because temperature is going up as you get closer to the star,’ said geochemist and study co-author Rajdeep Dasgupta , the Maurice Ewing Professor of Earth Systems Science at Rice.

‘The point where the temperature is high enough for ice to be vaporised, for example, is a sublimation line we call the snow line .’

In the simulations, pressure bumps at the sublimation lines of silicate, water and carbon monoxide produced three distinct rings.

The basic ingredient of sand and glass, silicon dioxide, became vapour at the silicate line.

This produced the Sun’s nearest ring where Mercury, Venus, Earth and Mars went on to form.

The middle ring is at the snow line and the farthest line is at the carbon monoxide line, they found.

Protoplanetary discs cool with age, so sublimation lines would have migrated toward the sun, the model suggests.

The study showed this process could allow dust to accumulate into asteroid-sized objects called planetesimals.

Over time, through the force of gravity and collision, these small rocks could then come together to form planets.

Izidoro said earlier studies worked on an assumption that these planetesimals could form if dust were sufficiently concentrated.

However, no model offered a convincing theoretical explanation of how dust might accumulate, whereas this model shows bumps can concentrate dust, and moving pressure bumps can act as ‘planetesimal factories’.

‘We simulate planet formation starting with grains of dust and covering many different stages, from small millimeter-sized grains to planetesimals and then planets.’

Long before planets formed in the solar system, the Sun had rings, similar to those around Saturn, and they may have stopped Earth getting any bigger, study claims

Our early solar system had a gap between its inner and outer regions even when it was just a swirling mass of gas and dust, a new study reveals.

The mysterious gap, described as a ‘cosmic boundary’, existed around 4.567 billion years ago, when the solar system had just formed.

It grew to form what is today the gap between Mars and Jupiter, separating the inner and outer planets.

Currently, the dividing gap between Mars and Jupiter, where the asteroid belt lies, is 3.68 astronomical units (342.24 million miles).

But this isn’t even the largest gap between two adjacent planets – the greatest average distance between two planets today is between Uranus and Neptune, at 10.88 astronomical units (AU), equivalent to 1.01 billion miles.

Previous simulations of the solar system produced a Mars ten times more massive than the Earth – a Super Earth.

However, the Rice simulation puts Mars at 10 per cent of Earth’s mass, born in a ‘low mass region of the disc’.

Their model also solves a long-standing mystery in the chemistry of the solar system, according the team.

That is – the difference in chemical composition of inner and outer solar system objects.

But also why they both appear in the asteroid belt after Mars.

Izidoro’s simulations showed the middle ring could account for the chemical dichotomy by preventing outer-system material from entering the inner system.

The simulations also produced the asteroid belt in its correct location, and showed it was fed objects from both the inner and outer regions.

‘The most common type of meteorites we get from the asteroid belt are isotopically similar to Mars,’ Dasgupta said.

‘Andre explains why Mars and these ordinary meteorites should have a similar composition. He’s provided a nuanced answer to this question.’

Izidoro said the delayed appearance of the sun’s middle ring in some simulations led to the formation of super-Earths, which points to the importance of pressure-bump timing.

‘By the time the pressure bump formed in those cases, a lot of mass had already invaded the inner system and was available to make super-Earths,’ he said.

‘So the time when this middle pressure bump formed might be a key aspect of the solar system.’

The findings have been published in the journal Nature Astronomy.