After nine years of marriage, one daughter and years of enforced separation caused by relentless touring with his band 10cc, Eric Stewart’s wife Gloria started complaining that he no longer told her he loved her.

Her grumbling fell on deaf ears.

‘If I said it all the time, it would lose its meaning,’ he would protest. Which, to Gloria, felt a little thin.

They’re still in love: Eric Stewart of 10cc and his wife Gloria pose in 1970

But, then, Eric thought again. Even better, he secretly wrote an ironic song explaining exactly how deeply he adored her, how desperately he pined for her when he was away, how he hung her picture on his wall and gazed at it — all without using those three little words.

Eric wanted to write a love song for his wife without saying ‘I love you’. He wanted to show the conflict between feeling a certain way, yet avoiding those words.

The result, I’m Not In Love, was a massive hit in 1975, going to No 1 in charts all around the world; it earned endless royalties and inspired an entire generation of musicians.

Everyone over the age of 40 knows the lyrics ‘I’m not in love, so don’t forget it; it’s just a silly phase I’m going through’.

The song has been the soundtrack to countless romantic moments. It also made Eric and fellow Mancunian band members, Graham Gouldman (who co-wrote the song), Kevin Godley and Lol Creme, very rich. Even more important, it placated the lovely Gloria. Earlier this month, they celebrated their 52nd wedding anniversary with a big dinner for friends. 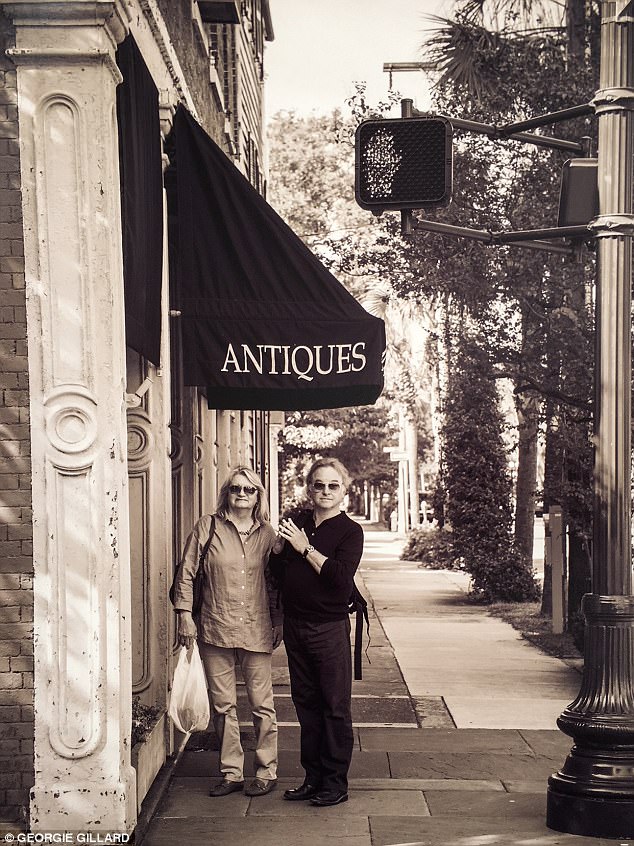 ‘We try to be romantic — we send each other cards and flowers and surprise each other. It’s important to keep that side going,’ says Gloria, who is still a vision, with blonde hair, pink cheeks and great legs. ‘Even if sometimes someone needs a bit of a reminder . . .’

Eric is more prosaic. ‘The fact it’s lasted 52 years, especially in the music business is bloody astounding,’ he says. ‘Because you’re tempted all the time!’

Now 73, he looks more like a rather meek music teacher than a rock star who has worked with all the greats, from Paul McCartney to the Rolling Stones, Stevie Wonder to James Brown.

As he offers me a flapjack, it’s easy to forget that, in the halcyon days of the mid-Seventies, 10cc — christened in 1972 by record producer Jonathan King (later convicted of child sex abuse) who signed them to his label and then had a dream about a chart-topping band under that name — were the most popular group in the world for a time.

That night he met Gloria in 1964, Eric, a 19-year-old self-taught guitarist, was well established on the music scene. His band, Wayne Fontana & the Mindbenders, was riding the wave of their first major hit, and was a popular live attraction throughout the UK.

Gloria, who’d grown up on a dairy farm in Haworth, West Yorkshire, was still at school, although modelling in her spare time. She’d gone along to the gig in Halifax with her friend, Pauline Matthews (now better known as the singer, Kiki Dee).

‘Apparently, Kiki quite fancied me!’ says Eric, pink-faced at the notion. ‘But when Gloria walked in I was dumbfounded. She was gorgeous, stunning. It was love at first sight!’ 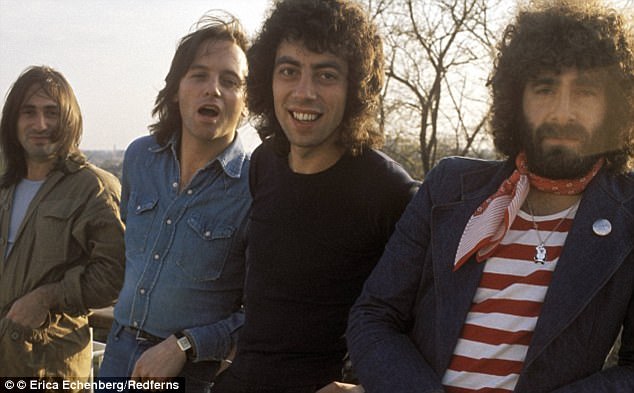 Gloria met Eric, a 19-year-old self-taught guitarist, when he was already well established on the music scene

He asked if she’d like to hop in the band’s van to see a gig in Manchester with Eric Clapton later than night. ‘Yeah. OK,’ was Gloria’s reply. And in an instant, her dreams of A-levels and art school flew out of the window.

Ignoring her father’s gruff ‘I’ll give it two years’, she became wife to one of the biggest pop stars in the world at just 18. On their wedding day, March 10, 1966, the Mindbenders (without Wayne Fontana) were back at No 2 with A Groovy Kind Of Love.

Gloria’s father shouldn’t have worried because Eric and his band members — the Mindbenders and 10cc (which grew out of trio called Hotlegs) — were never very rock ‘n’ roll.

They didn’t smash up hotel rooms — ‘I was more likely to fix a broken shower rail than break anything. I love mending things!’

And until The Beatles introduced him to Scotch and Coke (‘a very dangerous drink’), even booze was thin on the ground.

‘There was no time,’ he says. ‘When we got back to our hotel at night the kitchen would be closed and we’d get up in the morning and straight onto a flight.’

Whatever, 10cc might not have been the coolest band in the world, but there were groupies. Did he and the others take advantage? ‘We weren’t that sort of band,’ he says.

I ask Gloria if she ever worried he’d been tempted. ‘Well, I’ve no idea whether he was, or not,’ she says. ‘But you have to trust and hope for the best. It wasn’t easy.’

After the birth of their daughter, Dieta, she moved back in with her parents for a time, as Eric jetted around the world. ‘I didn’t see much of him for the first few years,’ she says and agrees that the pressures would have broken many couples — but not them.

‘I’ve never been looking for anyone else and I’ve never met anyone to make me want to leave Gloria,’ says Eric. ‘I’ve just always really, really loved her. Even if I didn’t always say it in the early years.’

I’m Not In Love put that right. Gloria knew nothing about it until the band invited the wives (her sister, Angie, is married to guitarist Lol Creme) to hear it.

‘It sent shivers down the spine,’ she says. ‘It was very special.’

Even better, from that day on, Eric started telling Gloria he loved her again. ‘Well, he had to then, didn’t he?’ she says archly. 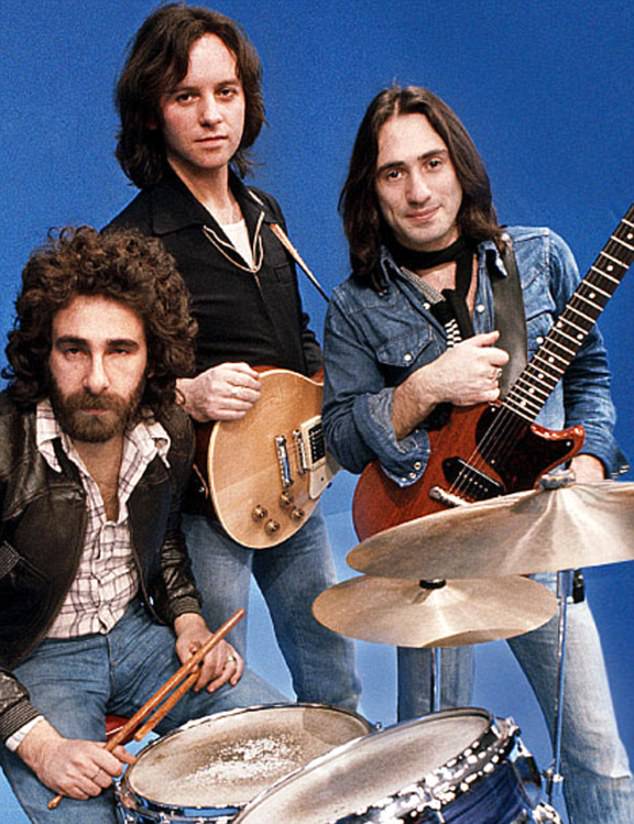 10cc went on to have five of their albums certified gold

Before I’m Not In Love, 10cc had had a string of hits and were the critics’ darlings, but that song put them in the major league.

Eric played with the Stones and adores Keith Richards (‘he’s crazy now, but I still love him’), dislikes Jagger (‘rude and a prima donna’), built a multi-million-pound house in Surrey and snapped up a slew of fast cars and a holiday house in Barbados, where they hung out with the McCartneys.

The couples were great friends, both living in East Sussex. Paul and Eric played together, and Linda and Gloria went horse-riding. Both battled breast cancer at the same time, but while Gloria survived, Linda, sadly, didn’t.

Eric and Gloria were not big partygoers and never embraced drugs. Marijuana sent Eric to sleep and ‘did nothing’ for Gloria, other than give her ‘a scratchy throat’. The closest they came to the hard stuff was in the late Seventies, when Eric and jet-lagged U.S. drummer Steve Gadd snorted cocaine every night for a week while recording.

‘When I played back what we’d done, it was awful! Never again,’ says Eric. ‘And never LSD — the Beatles tried it, John and Paul, and they really did suffer later.’ Eric’s most rock-starry splurge was his car collection — Bugattis, Jaguars, Alfa Romeos. ‘I once got up to 174mph on an empty motorway in a Ferrari Boxer, with Gloria in the passenger seat!’ he says.

Gosh! What on earth did she say?

‘Slow down! And don’t do it again. It was a thrill, but she was right.’

But one night in 1979, she wasn’t there to tell him off. Driving back from his studio, a little too relaxed after a couple of rum and Cokes, seatbelt undone, he hit a spot of black ice and crashed into a tree.

Eric fractured his skull, damaged his left eye and lost the hearing in his left ear. It took him a year to recover and, when he did, 10cc’s time in the spotlight was fading.

‘It was a very difficult time,’ says Gloria quietly.

Today, the cars are all gone. ‘Now she tells me off for buying too many sweaters!’ says Eric.

Of course, all marriages are full of ups and downs and Eric and Gloria have had their share.

‘It’s been a rollercoaster and I’m not sure how we’ve managed to stay together all this time,’ says Gloria. ‘But we have. It can only be because we just love each other.’

But also because they’ve worked at it, focusing on joint interests — doing up houses (here and in France), walking the dog, going out for dinner together at least once a week — and spending time with their two children (they had a son, Jody, in 1980) and their grandson, Christian.

Does Eric use the ‘L’ word now?

‘Oh yes! Every single night! ‘Goodnight, I love you,’ I say, just before we turn the lights out. And she always says, ‘I love you’ back.’