These photos are enough to give you the chills.

They are the winning images in a prestigious photography competition called Capture the Extreme, which celebrates the cultures, wildlife and beauty of the planet at its coldest reaches.

Now in its second year, the contest, run by luxury outerwear brand Shackleton in collaboration with Leica Camera AG, attracted more than 1,000 entries from around the world, showcasing regions far and wide, from Greenland, Scotland and Patagonia to Antarctica, Svalbard and Pakistan.

British photographer Tamara Stubbs was named as the overall winner for her ‘timeless image’ of a penguin looking inquisitively at a polar explorer dressed like Ernest Shackleton in Antarctica.

Meanwhile, there were four winners in the categories ‘wildlife’, ‘people’, ‘adventure’ and ‘landscape’ and the public had their say in the Explorers’ Choice Award, choosing their favourite from the 25 highly commended images. More than 3,000 people voted with Wilder Biral’s landscape shot of Russia’s famed Lake Baikal coming out on top.

Commenting on the contest, Martin Brooks, co-founder and CEO of Shackleton, said: ‘This competition isn’t just a celebration of incredible scenery, wildlife and adventure, it’s a celebration of the men and women who have the passion and patience to document these moments.’ Trek down to see the winning images and 25 highly commended shots, which caused the judges to freeze in their tracks…

Tamara Stubbs was named the overall winner of the Capture the Extreme contest thanks to this ‘timeless image’ she snapped in Antarctica of a penguin looking inquisitively at a polar explorer dressed like Ernest Shackleton. Describing the moment, she said: ‘The photo was taken in Antarctica in 2019. We were shooting close to some penguins when one took an interest in a scientist and started chasing her – it was quite amazing to watch. While running past, the penguin suddenly saw this man dressed like Ernest Shackleton and slammed on the brakes. The two figures stared at each other, just for a moment, and I caught this extraordinary moment of intimacy between the two of them. It was one of my favourites from my time in Antarctica – it’s somewhat timeless’ 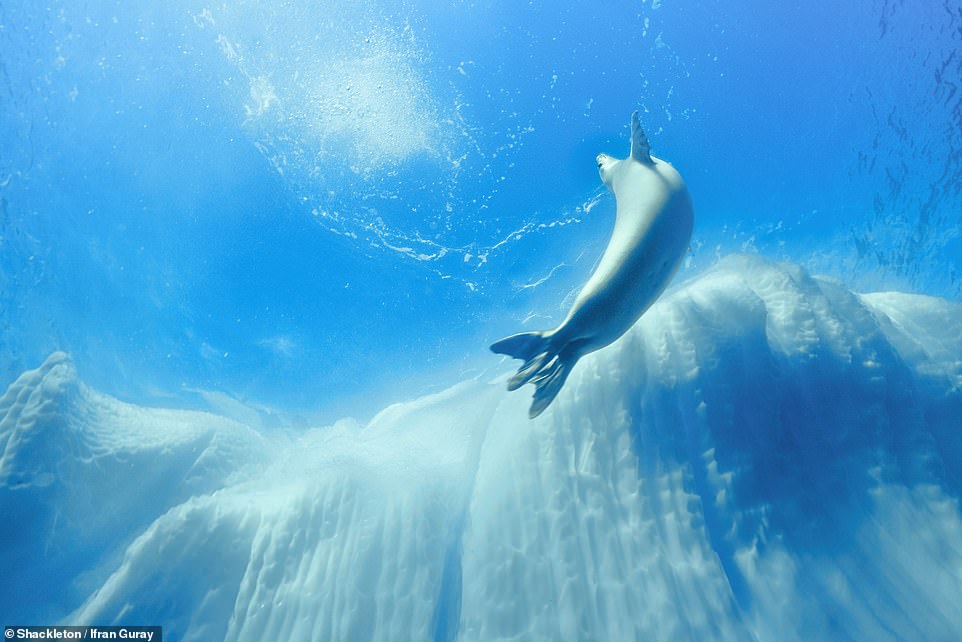 Ifran Guray captured this stunning underwater scene in Antarctica in March 2018. He said of the image: ‘I did several dives at different locations. We had just started our dive at an iceberg at Neko Harbour and as we were nearly at 50ft (15m) depth, a crabeater seal on the iceberg jumped into the water and immediately returned up when it saw us. It all happened very suddenly and I took the picture at this moment’ 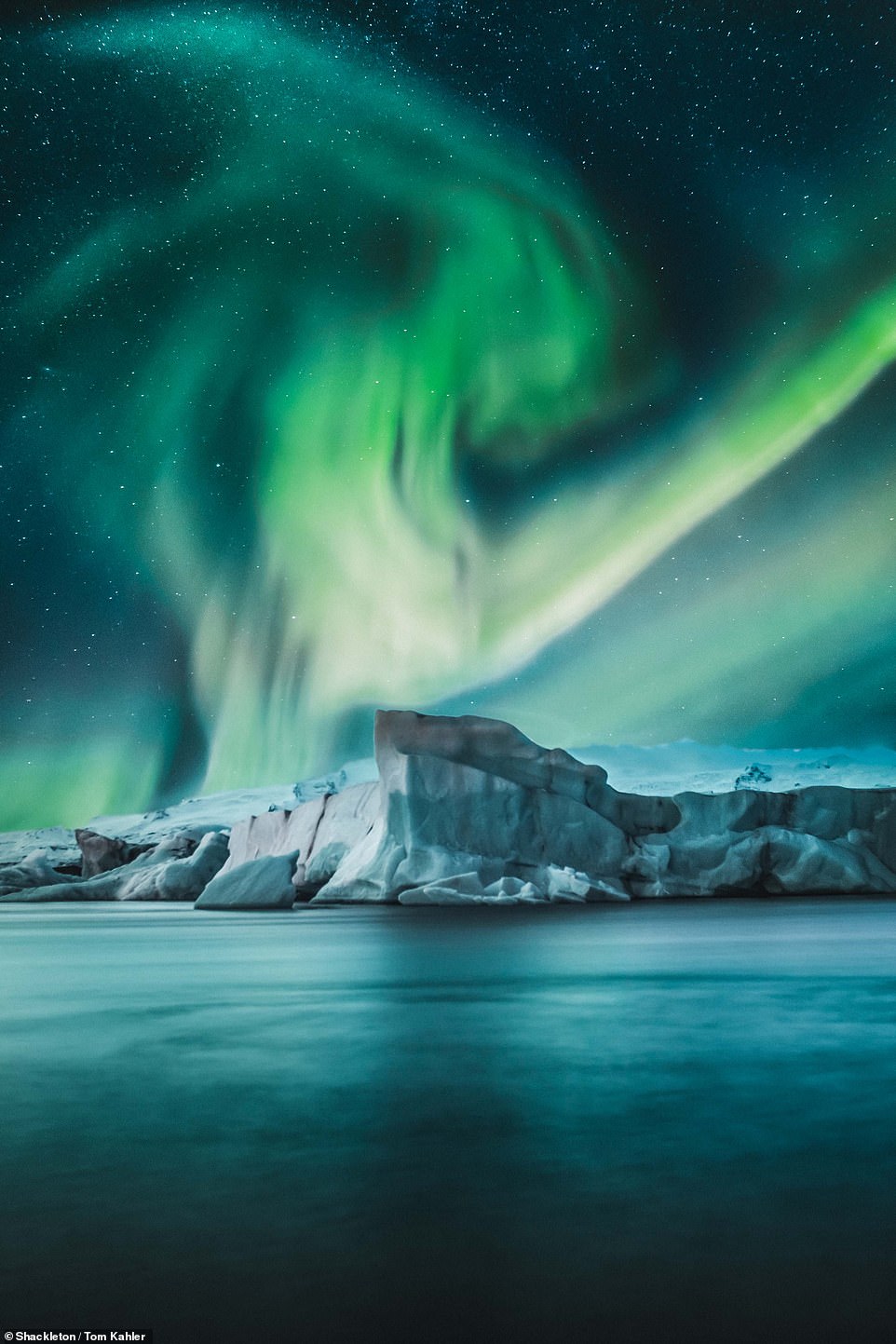 Photographer Tom Kahler said this shot he took by a glacial lagoon in Iceland featuring the Northern Lights is one of his ‘all-time favourite photos’ and it was one of the best moments of his life. He mused: ‘Nature put on the show of a lifetime for 30 seconds or so’ 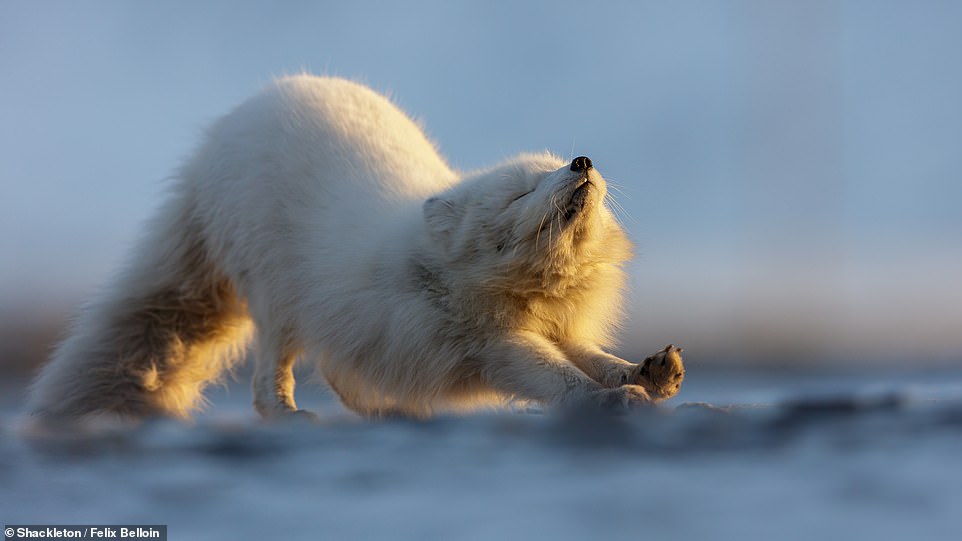 This incredible image by Felix Belloin of an Arctic fox in the Norwegian archipelago of Svalbard won first prize in the wildlife category. The judges commented: ‘This is a really natural moment in such an extreme place. These Arctic foxes endure harsh conditions on Svalbard, but this photo shows a moment of absolute serenity. To capture animals in this way requires dedication and patience, even more impressive in conditions well below freezing. The light and composition are equally as impressive’ 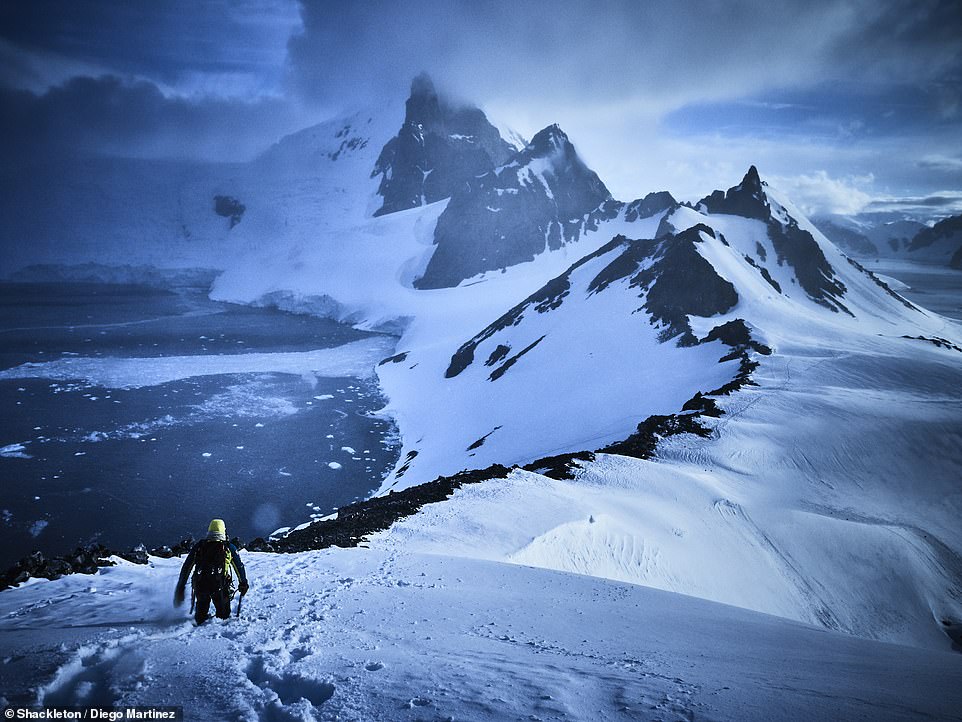 The stunning winning image by Diego Martinez in the adventure category. He took the photo during an expedition of Antarctica in December 2019 and January 2020 with international climber Alex Txikon. He said: ‘This image was taken on one of our first summits, Spigot Peak, a technical climb in mixed terrain in Orne Harbour. It was a hard, but very special climb. It was a really cold day with high-speed winds that made it hard to arrive at the base of the peak. In December the snow is not the best and every single step needs care in case of seracs and cracks. The image was taken going down from the summit around 11pm, with the Antarctic night gifting us a magic light’ 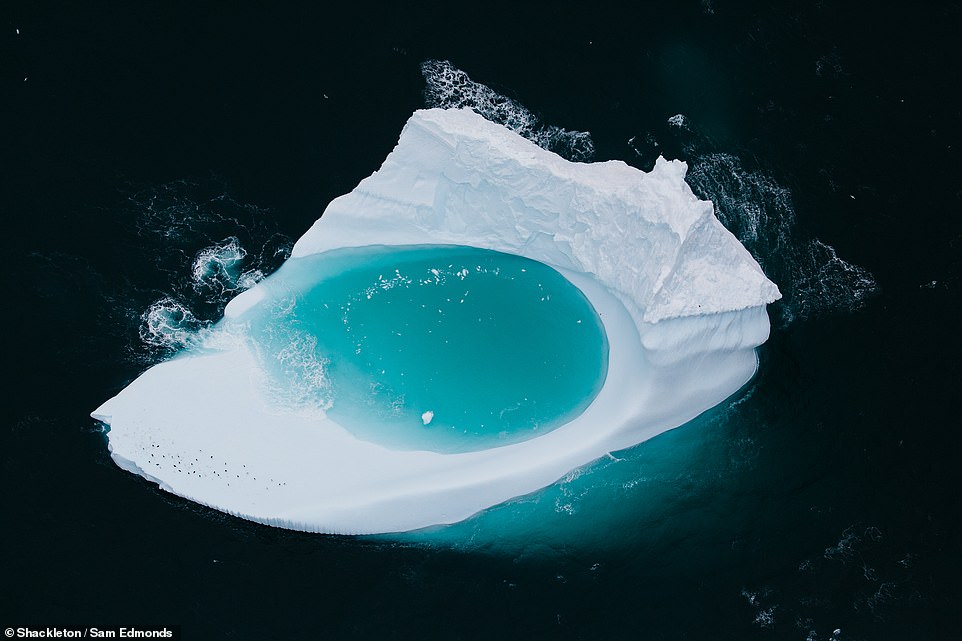 Sam Edmonds snapped this breathtaking aerial image of the Cooperation Sea in East Antarctica. He recalled: ‘While searching for a whaling fleet from a small aircraft, our team came across this sculpted iceberg featuring an interior pool of glacial melt. After the pilot put the helicopter into a steep spiralling bank, I was able to frame this formal composition and a bird’s eye view of the berg’ 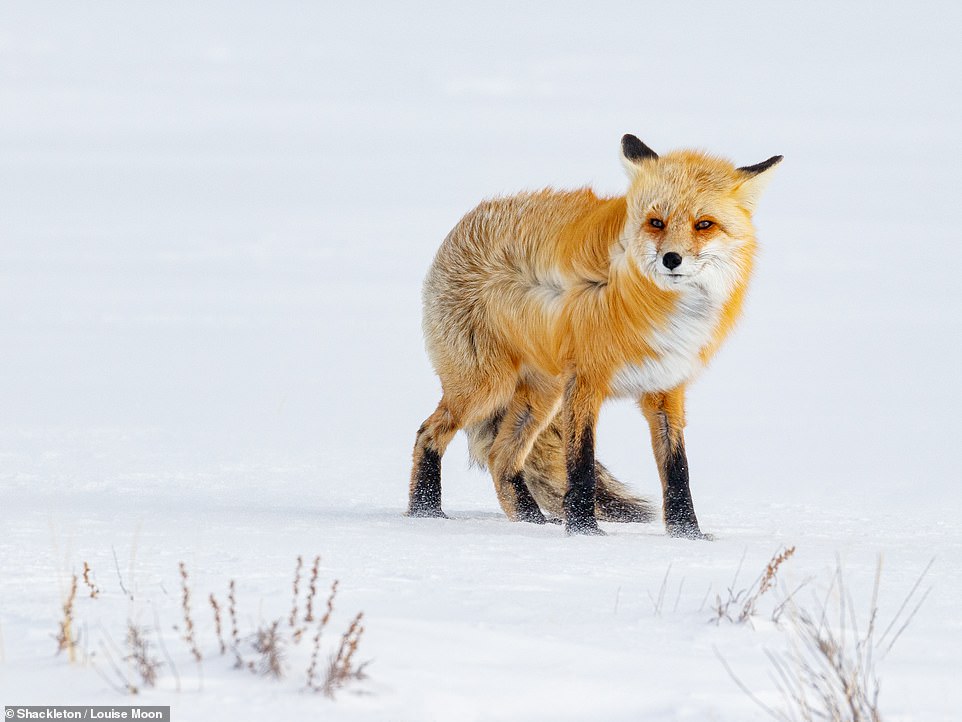 U.S. photographer Louise Moon is behind this fascinating snap of a red fox being battered by wind on a winter’s day in Yellowstone National Park. She said: ‘Despite the sub-zero conditions, this image shows how well foxes are adapted to the extreme conditions, their thick coat protecting them from the wind and worst of the weather’ 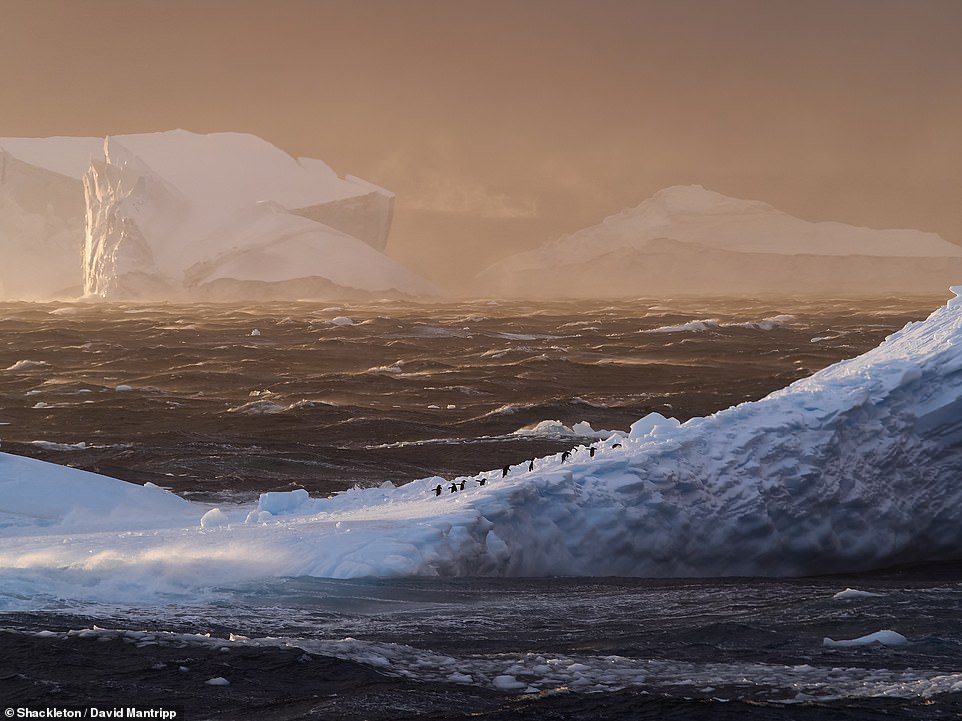 This atmospheric snap of the Antarctic Sound was taken by David Mantripp in December 2016 and was the winner in the landscape category. He took the incredible image during ‘an intense period of sailing’. He said: ‘The high seas and strong winds kept most people off deck, but I managed to wedge myself into a corner and was rewarded with this incredible view’ 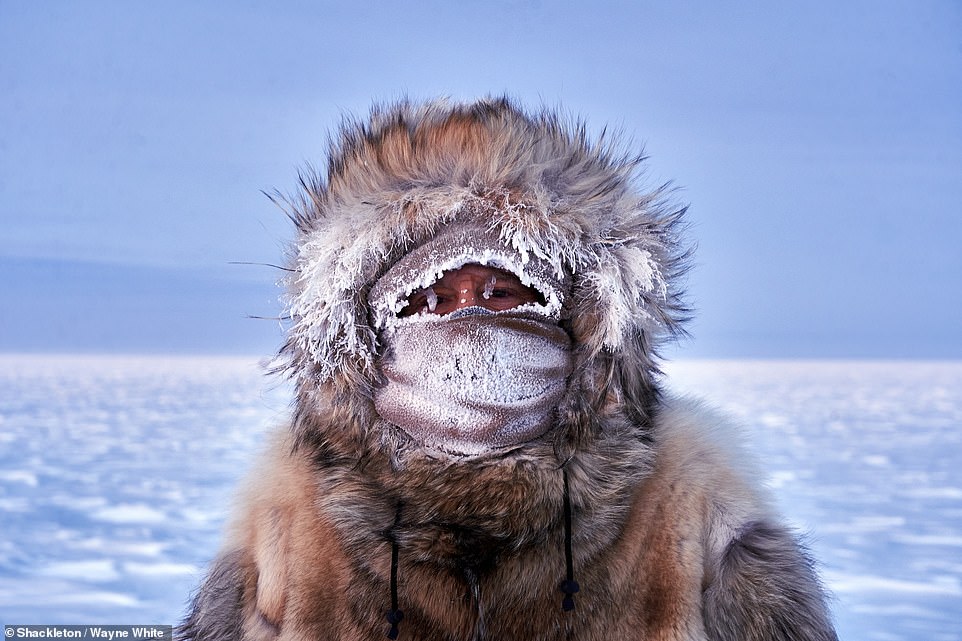 The winning image in the people category is this amazing shot of Wayne White at the Amundsen-Scott South Pole Station. White has spent almost three years in Antarctica managing the station and snapped this image in September 2020 while he was outside checking conditions and doing some exercise. The temperature was minus 75.6 degrees Celsius at the time. The judges said: ‘The frozen mask and iced eyebrows capture just how harsh this environment is – it gives us an idea of what it must be like to live and work in the coldest environment on earth’ 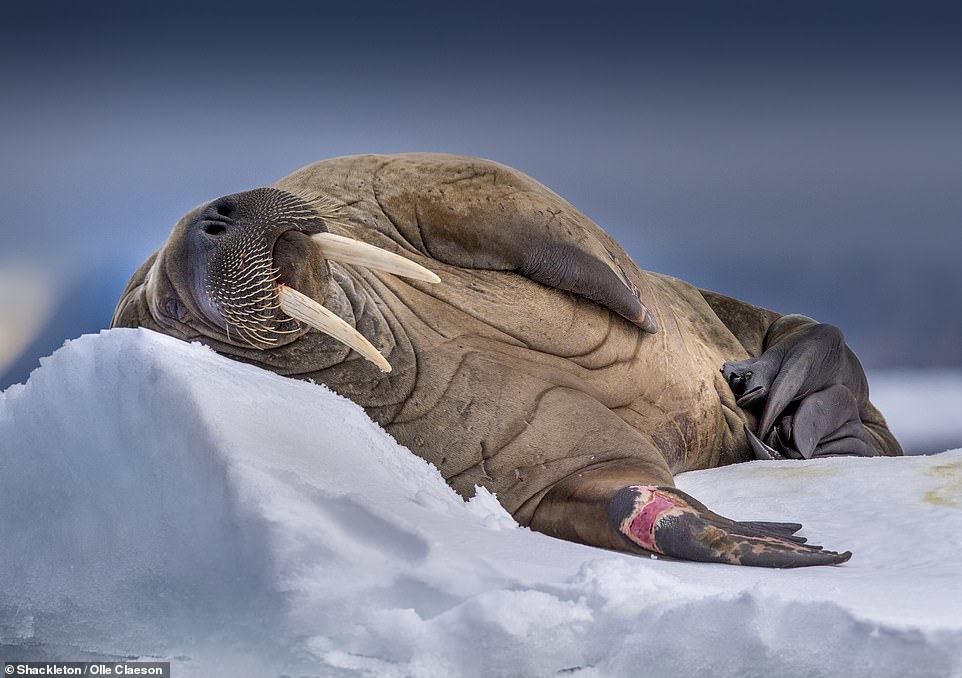 Photographer Olle Claeson is behind this amazing image of a giant male walrus sleeping on a piece of floating ice in Svalbard, Norway. He captured the scene while sailing around the archipelago in a small Zodiac boat and said that the encounter occurred at midnight, with ‘the only illumination coming from a hazed midnight sun’. As they approached the walrus, he apparently showed little interest and ‘just repositioned his head briefly [before going] back to sleep’ 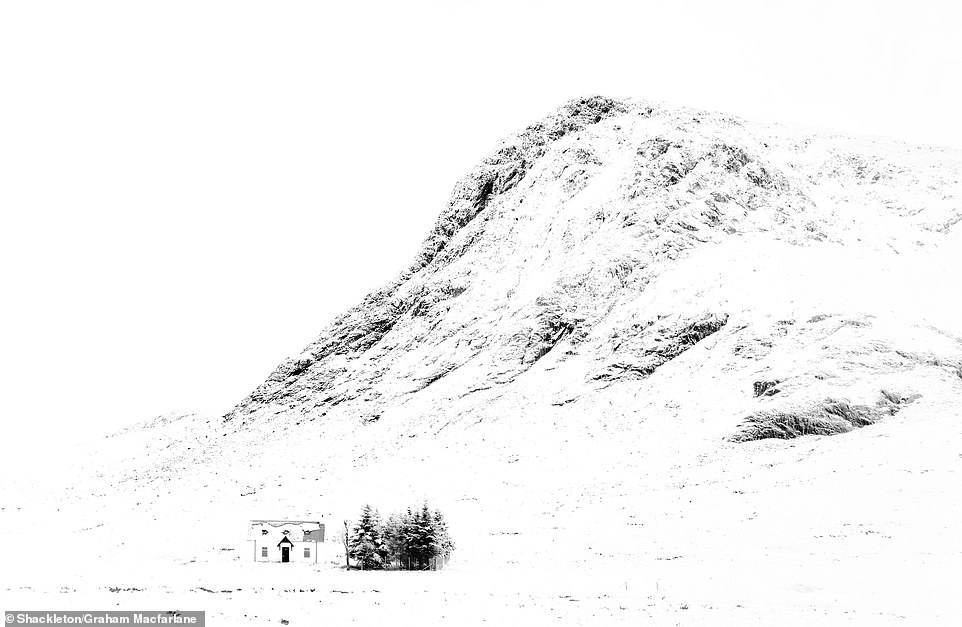 Scottish landscape photographer Graham Macfarlane impressed the judges with this snowy scene captured in the village of Glencoe in the Scottish Highlands, with the house seemingly blending into the mountain 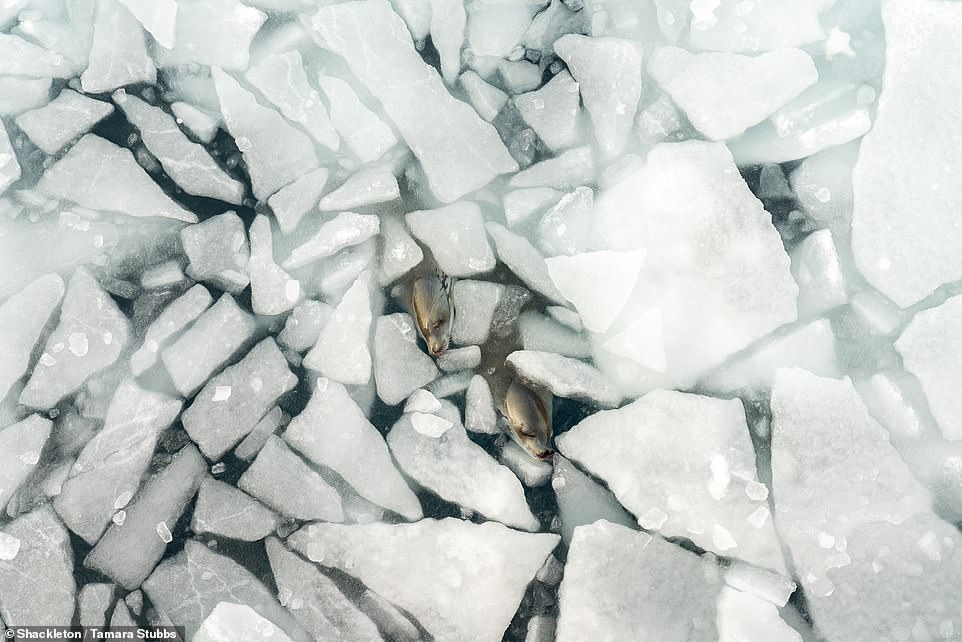 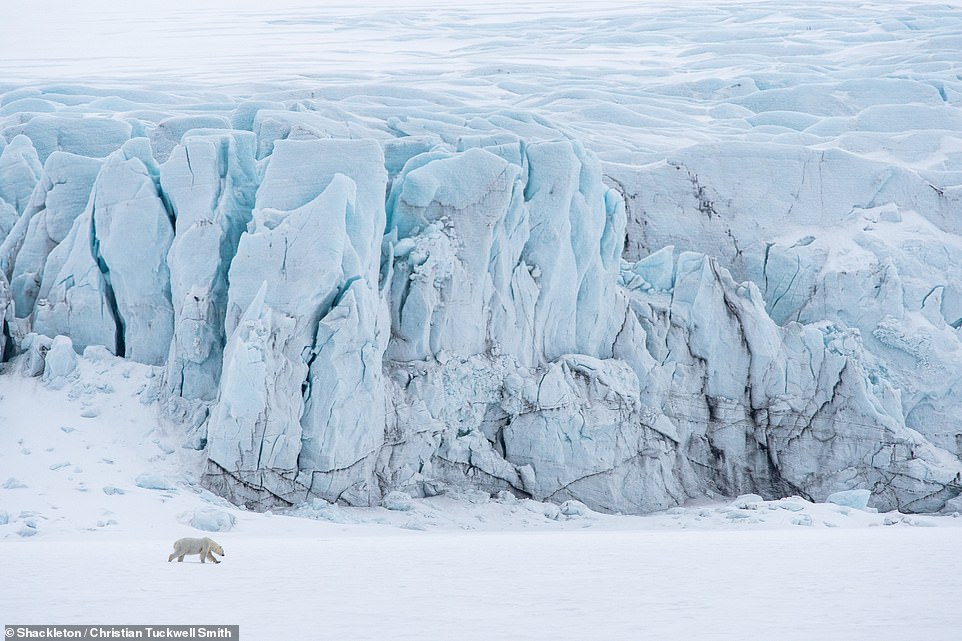 Christian Tuckwell Smith took this majestic image of a polar bear in Svalbard in May 2019. He was part of a photographic trip to the archipelago and after a reported polar bear sighting, he went with other photographers in a Zodiac boat to find the creature. They eventually found a large female polar bear wandering along looking for a place to settle for the night. Tuckwell Smith said: ‘As she carried on walking, she crossed in front of the nearby rugged glacial wall, completely dwarfed by its immense size. The scene seemed like that out of a fantasy novel with two icons of the Arctic world together’ 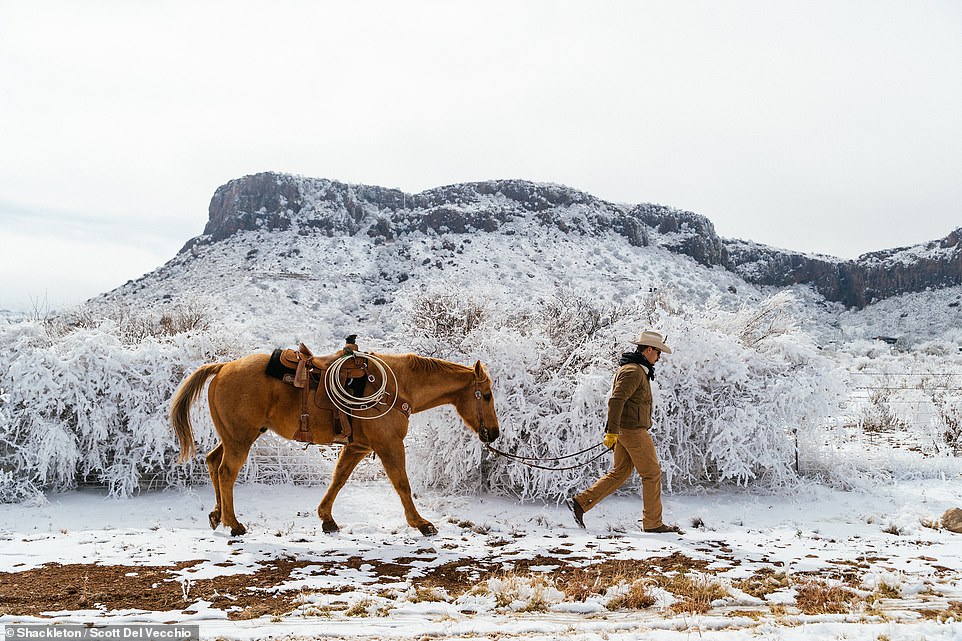 A beautiful shot by Scott Del Vecchio of the ‘last big snow of the season’ in Alpine, Texas. He said that the wintry weather gave him the opportunity to take more ‘interesting’ shots. He added: ‘I take these unusual moments as opportunities to shoot things that my future self will thank me for’ 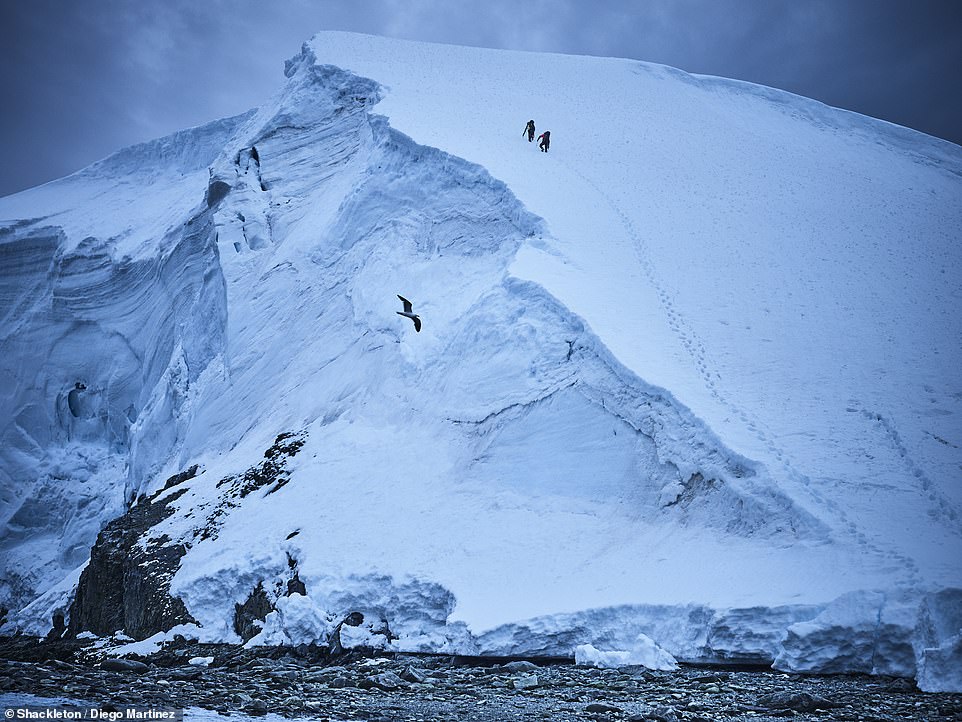 Diego Martinez, who scored first place in the ‘adventure’ category, was also highly commended for this moody image. It was taken while he was on an expedition in Antarctica with renowned Spanish climber Alex Txikon 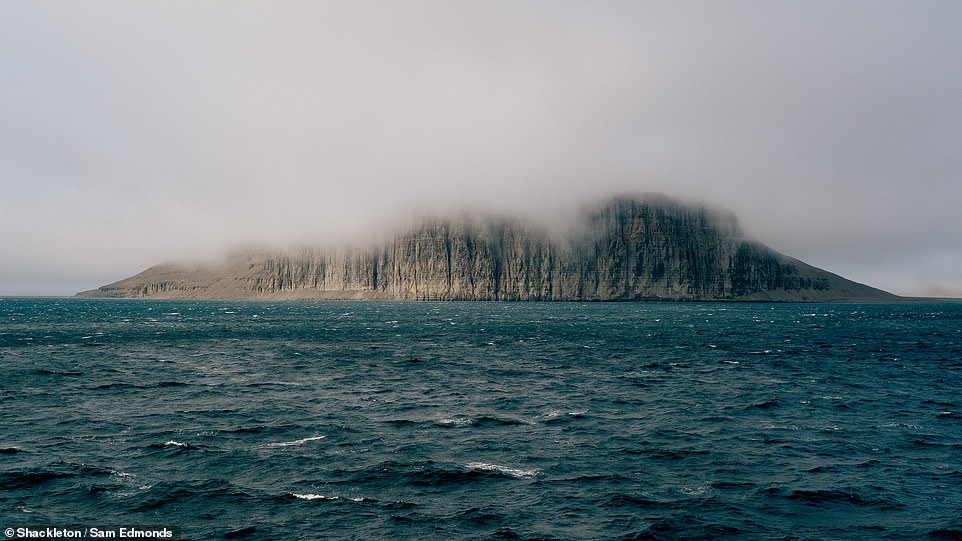 An incredible shot of a fog-shrouded Beechey Island in the Canadian Arctic by Sam Edmonds. He said that the place is ‘seemingly in a constant circulation of fog’ which adds to its intrigue. Beechey Island was where British explorer John Franklin and his 128 men spent the winter of 1845/46 during his ill-fated expedition in search of the Northwest Passage 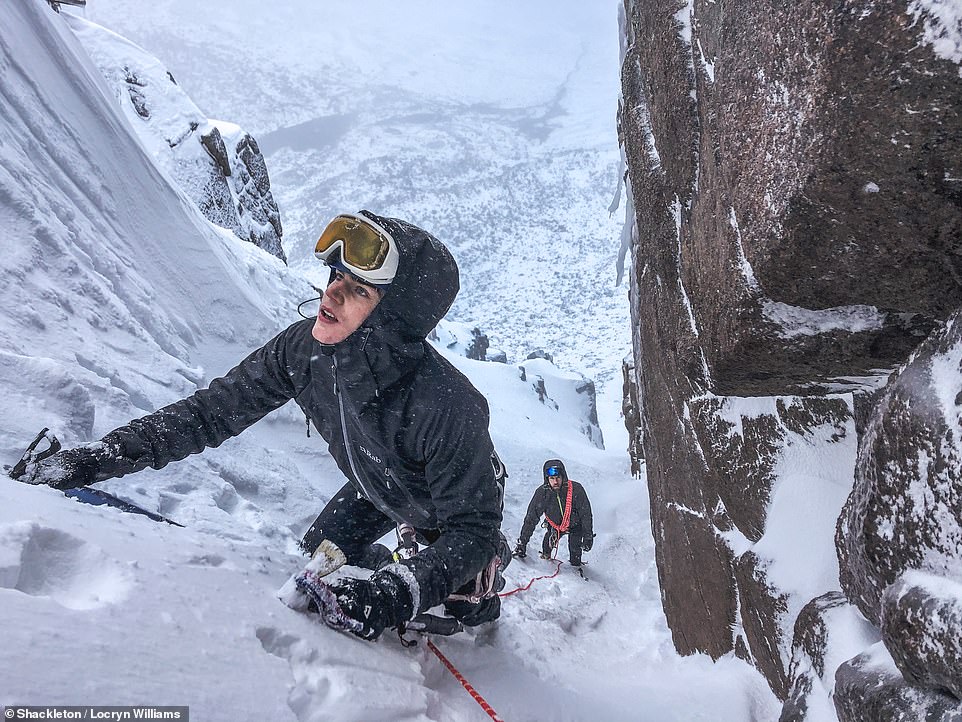 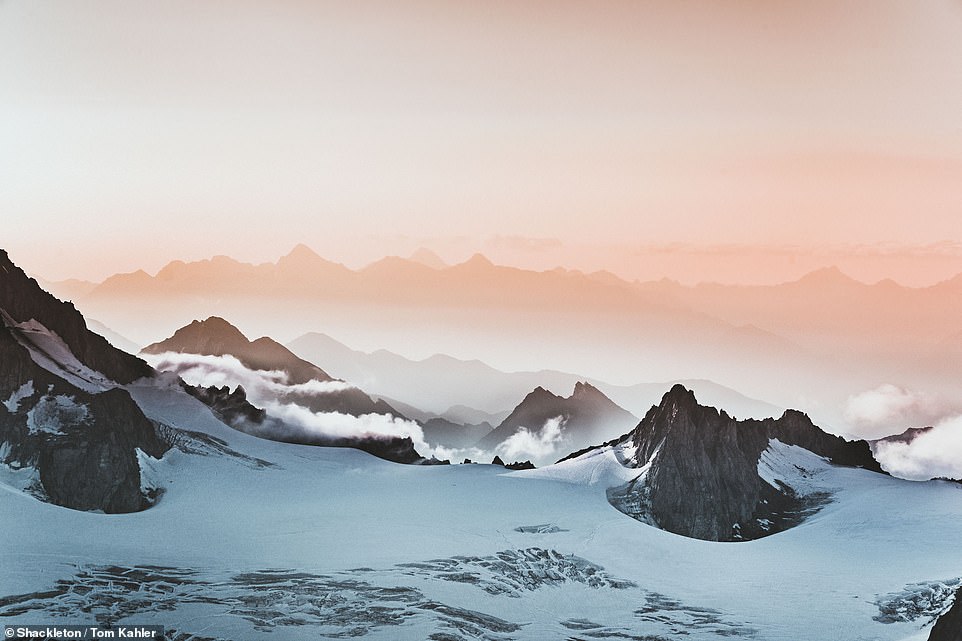 French photographer Tom Kahler captured the ‘vast scale of the Mont Blanc massif’ with this jaw-dropping sunrise shot. He included five people in the image for scale but they prove a bit tricky to find… 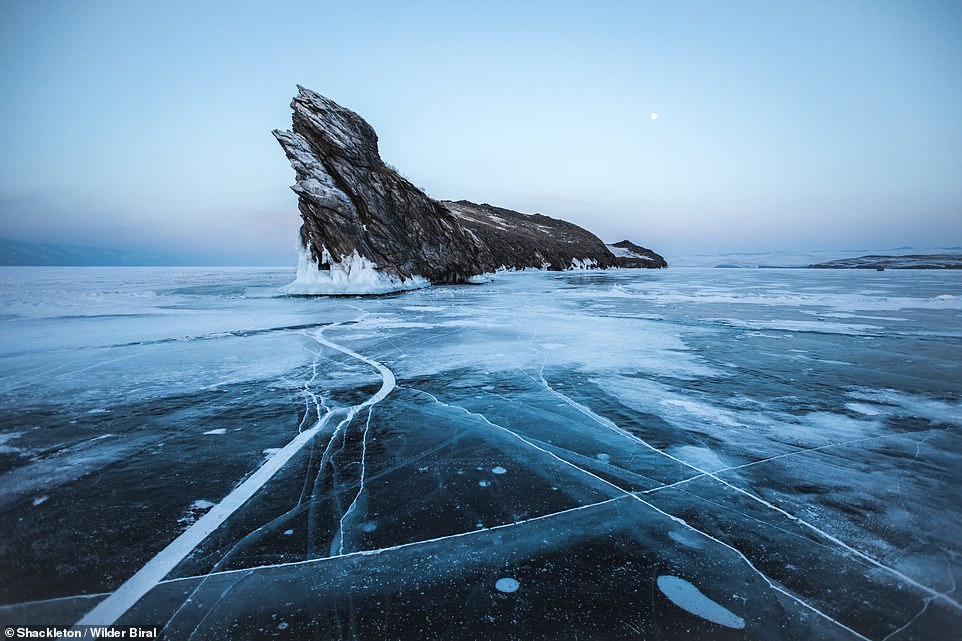 The public was able to vote for the winner of the Explorers’ Choice Award by choosing their favourite from the 25 highly commended images. More than 3,000 people voted with Wilder Biral’s stunning landscape image of Lake Baikal in Russia, pictured, coming out on top. The shot was taken on a frozen Lake Baikal at Cape Dragon during a photography expedition in 2017. The photographer said of the location: ‘It’s a very famous spot as this little island sticks out of the ice during the winter, giving the appearance of a head of a dragon. On this day, the temperature was around minus 28 degrees Celsius. I moved to shoot the rock with the moon behind – it’s one of my favourite pictures from that expedition’ 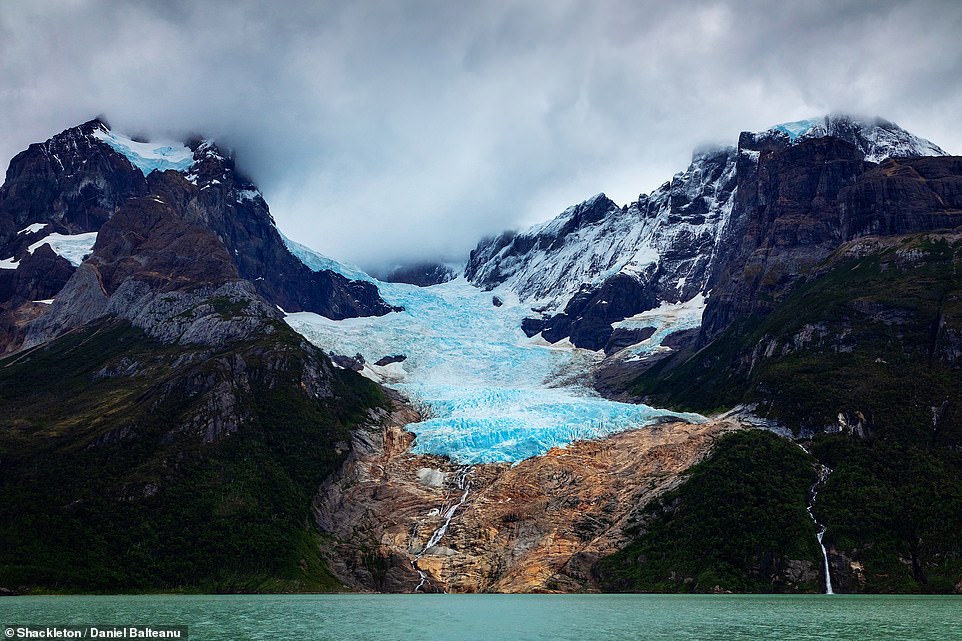 Photographer Daniel Balteanu is behind this breathtaking snap of the Balmaceda Glacier in Bernardo O´Higgins National Park, Chilean Patagonia. He said the conditions were pretty bad with strong winds and poor visibility but then the sun came out to ‘briefly throw its light directly onto the bluish glacier’ and he clicked away 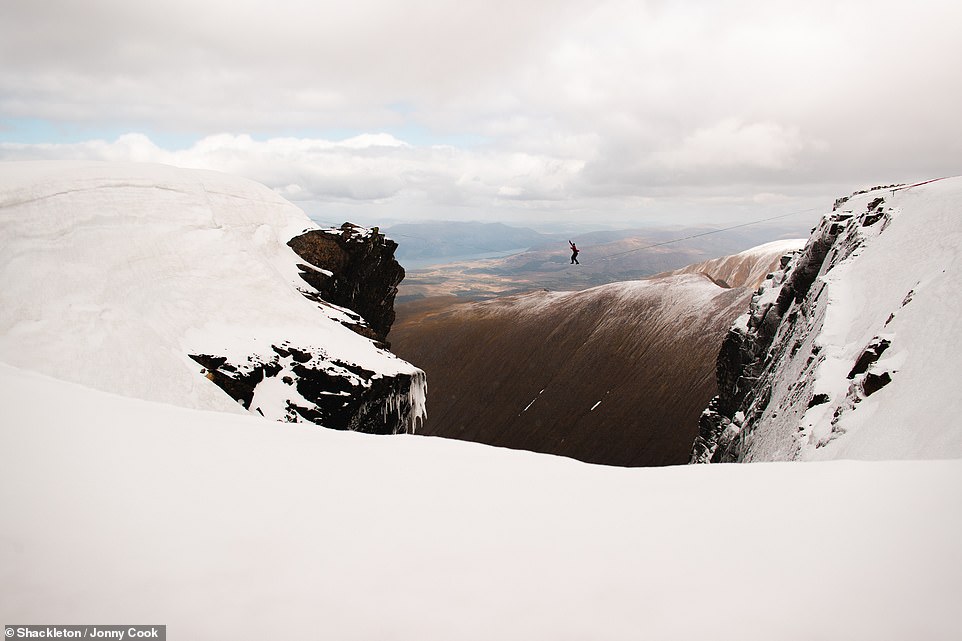 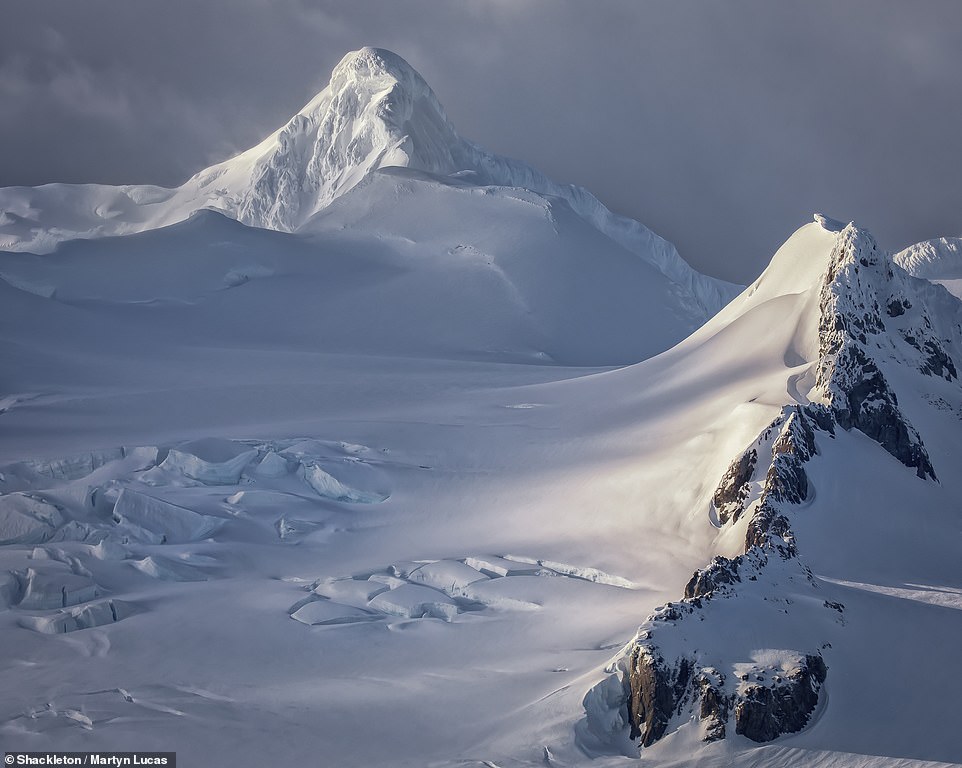 A serene shot taken by British photographer Martyn Lucas in Antarctica. It was highly commended by the judges 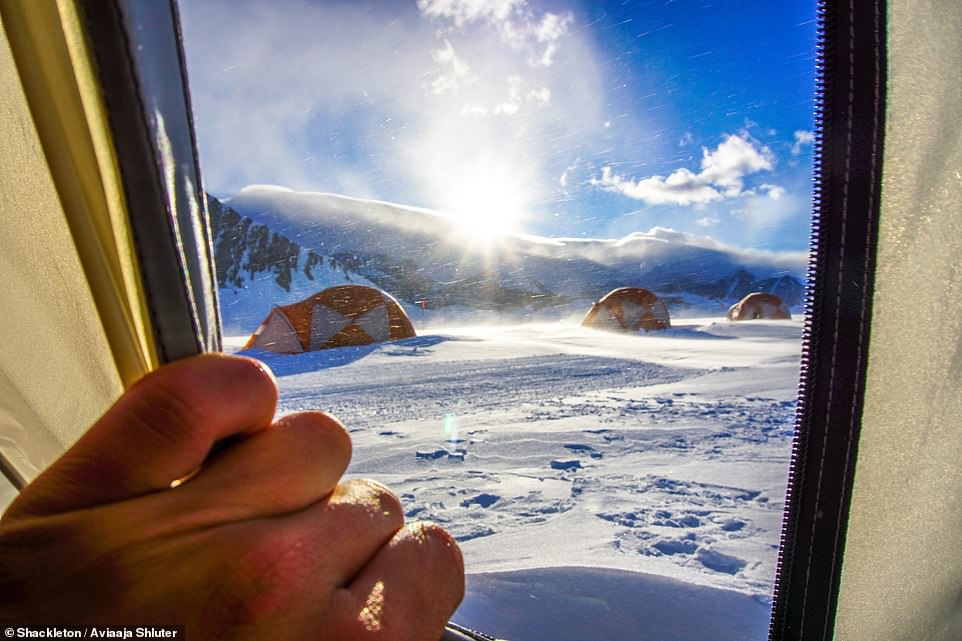 This candid snap by photographer Aviaaja Shluter offers a glimpse of what it is like camping on the Great White Continent of Antarctica, as strong Antarctic winds mix with snow and sunshine 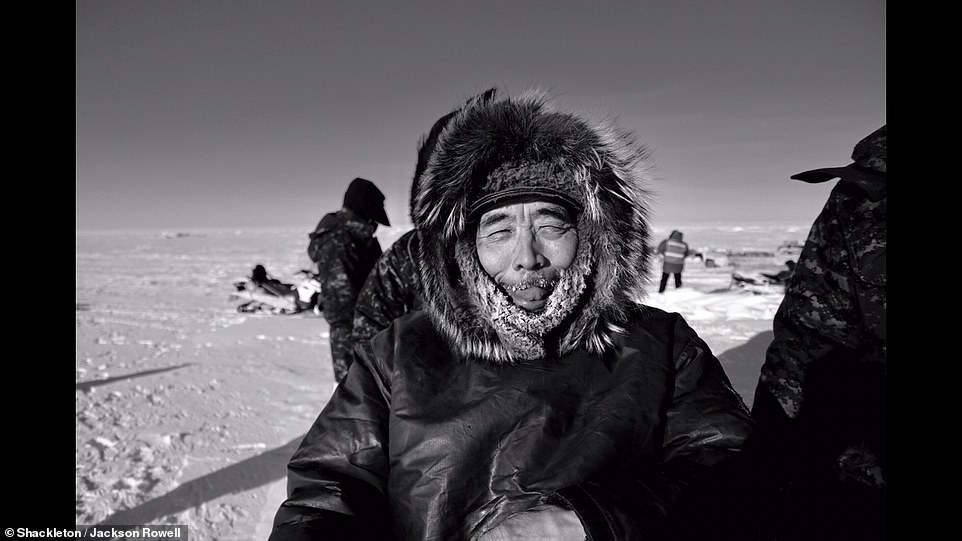 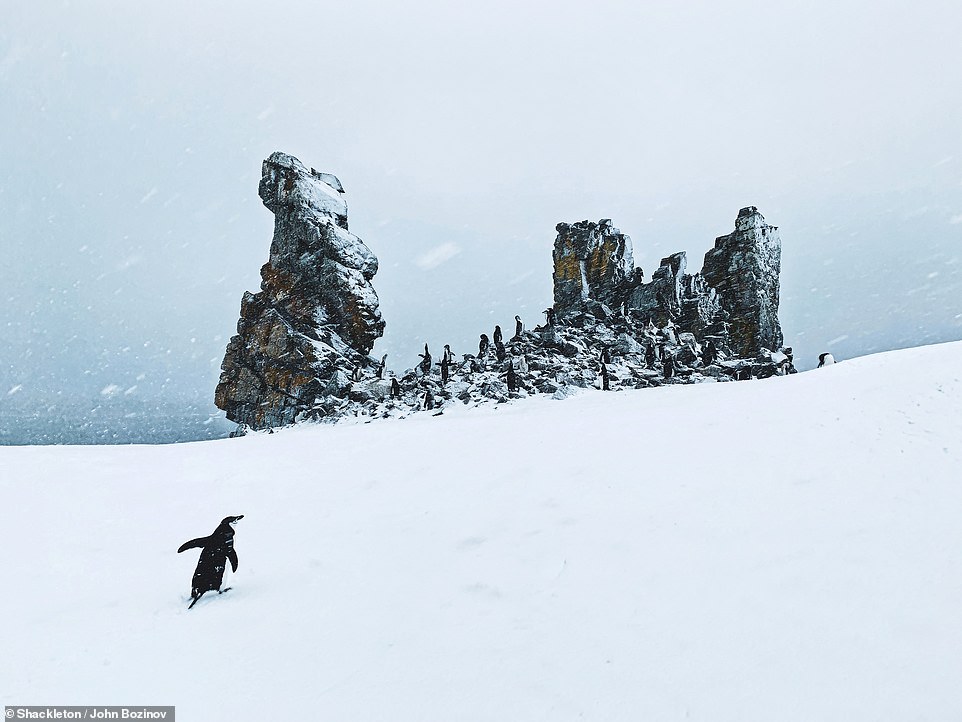 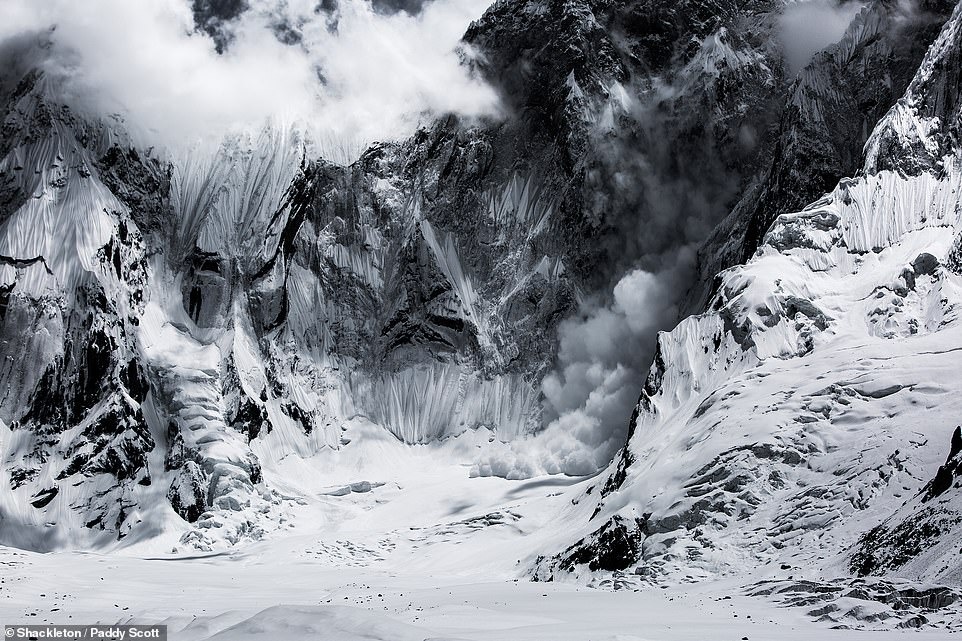 An incredible shot of the 23,474ft (7,155m) K6 Central mountain in Pakistan by photographer Paddy Scott. He said: ‘We had been stuck at basecamp, waiting for clear weather. K6 had been shrouded in a thick layer of mist and cloud for a few days, and then, the morning that I took this, the mist began to clear. As the visibility improved, it felt as if the mountain was starting to wake and shake off its snowy cloak. As huge avalanches thundered down the face, the mist slowly cleared, and I felt as if I was looking in on an amphitheatre with all this drama on show’ 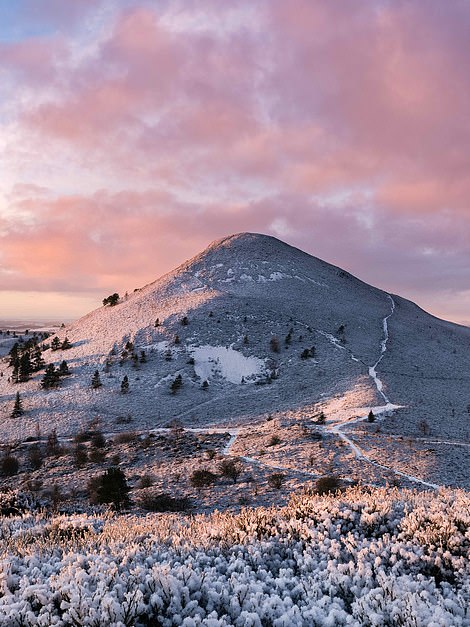 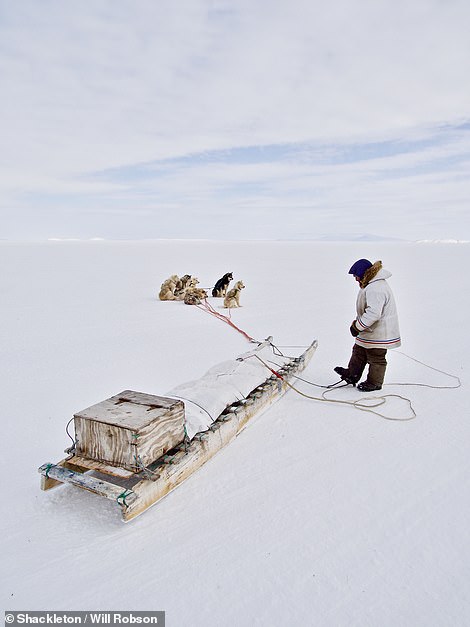 LEFT: A jaw-dropping shot of Eildon Hills in the Scottish Borders bathed in pink light taken by Andrew Macdonald during sunrise. RIGHT: A sled driver stamps on an iron spike anchor to prevent his dogs from running off in the Canadian Arctic in an  image snapped by Will Robson 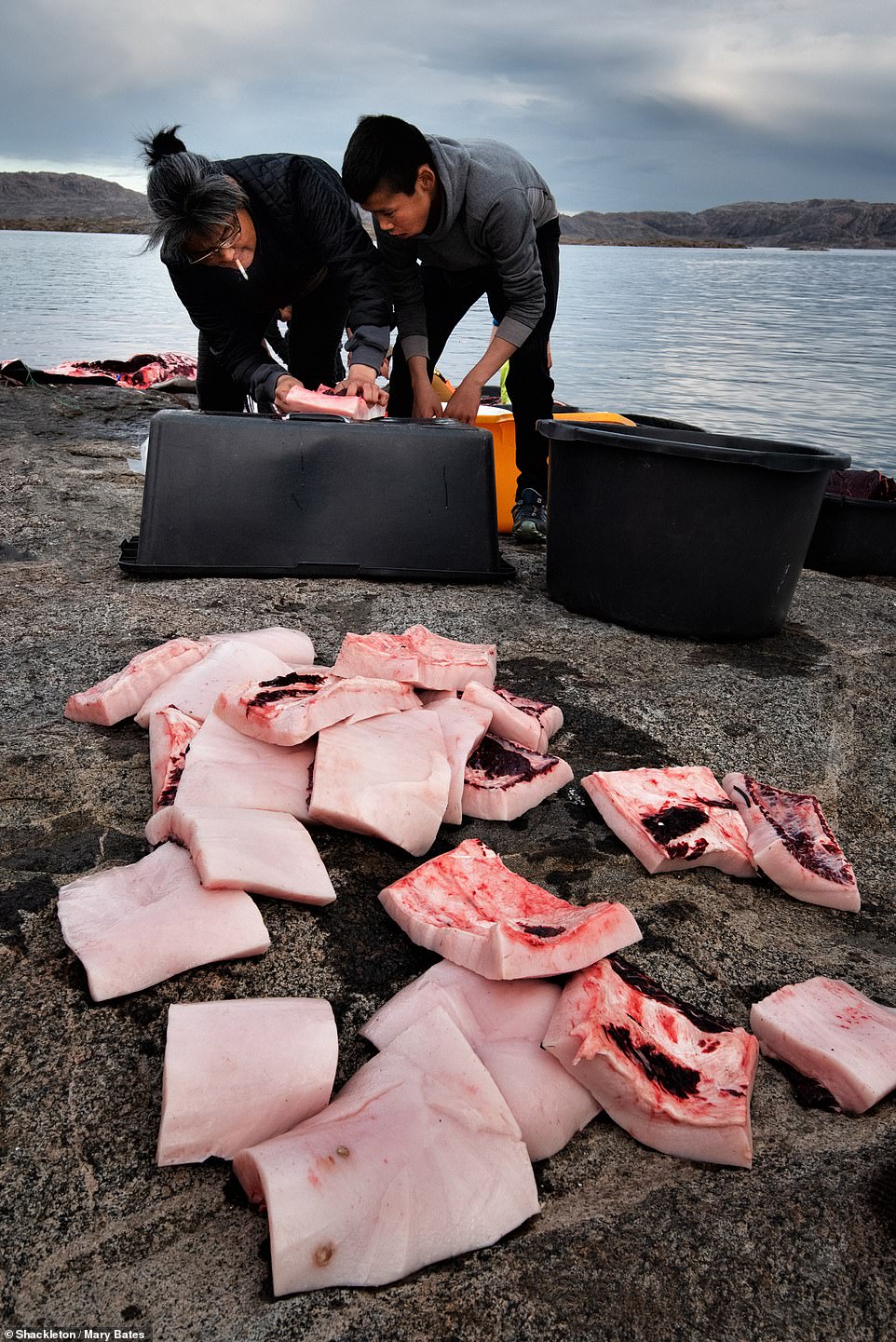 Photographer Mary Bates is behind this shot of a grandmother showing her grandson how to harvest the meat of a minke whale in Tasiilaq, Greenland. Mary spent over an hour photographing the pair after she was called to help pull in the whale alongside other travellers 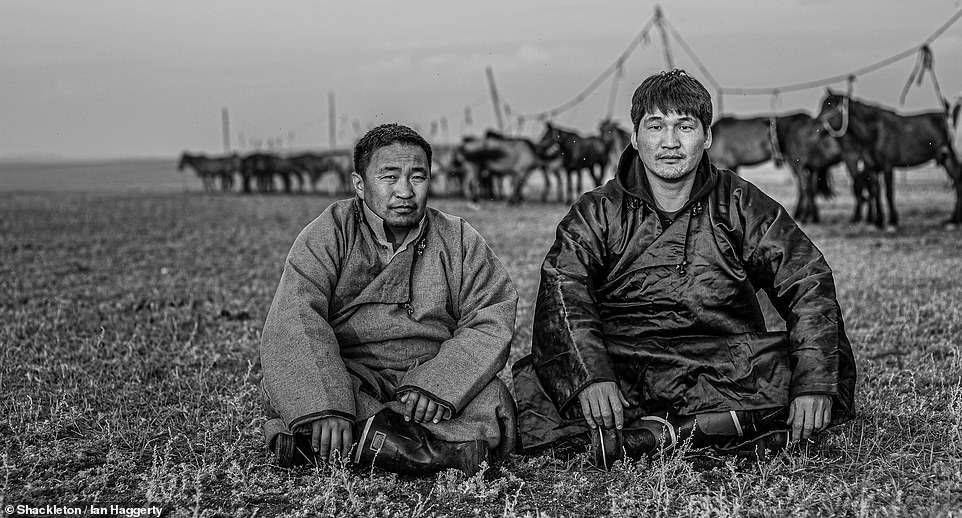 This powerful black-and-white image was snapped by Ian Haggerty in Mongolia August 2019. He explained: ‘I was chosen as one of the photographers to document the Mongolian Derby, the world’s longest horse endurance race. It’s an amazing event run by even more amazing people. I was travelling with a driver and a translator, seriously awesome guys who helped me so much. One evening, we stopped at one of the horse stations – the driver and a friend of his were wearing traditional Mongolian clothes so I offered to take their picture. I wanted the horse lines in the background to make for a truly memorable photo’