There is NO benefit to vaginal seeding, new study claims

Vaginal seeding, an increasingly popular practice which sees babies born by c-section covered with bacteria from the mother’s vagina, has no benefits and may even be dangerous.

A new study, comprising of a meta-analysis of papers, found that seeding introduces harmful bacteria and viruses to babies.

‘After reviewing the scientific evidence, we find no support for the “bacterial baptism” hypothesis,’ said Lisa Stinson, who conducted the analysis at the Division of Obstetrics and Gynecology, University of Western Australia.

The research also found babies born by c-section were missing similar levels of good bacteria as newborns delivered to mothers who were given antibiotics.

No evidence of benefit

Some believe exposing babies to the micro-organisms in vaginal fluid stimulates their immune systems, reducing their later risk of suffering conditions such as asthma and allergies.

When born via c-section, youngsters miss out on this exposure, prompting some mothers to vaginally seed their children by smearing their genitalia discharge across their baby’s face.

Mothers who breastfeed for at least two months after a c-section are three times less likely to experience persistent pain than those who do so for a shorter period of time, a study by Our Lady of Valme hospital in Seville found.

Anxiety significantly increases a woman’s risk of suffering discomfort after the operation, the study also revealed.

Caesarean sections make up around 25 per cent of all births in the UK and US.

One in five mothers undergoing the procedure suffer pain that lasts beyond three months.

‘My research involves working with a lot of mothers who are delivering by c-section and some mothers show an interest in vaginal seeding after reading about it on the internet,’ MA Stinson told Science Daily, who is carrying out her PhD at the University of Western Australia.

‘Understandably, they want to give their babies the best start in life and on the surface this practice makes sense.’

‘But there are certain risks, such as unintentionally transferring dangerous bacteria or viruses to the newborn, so we wanted to find out if these risks were justified,’ she said.

The study is a meta-analysis of various studies that compared bacterial populations of newborns and the way were delivered.

The results of the study did not show that bacterial populations in children who seeded were better than those that were not.

‘If passage through the vagina seeded babies with vaginal bacteria, we would expect to find these bacteria in babies born this way, but this is not the case.

‘It is likely that routine antibiotic administration given to mothers delivering by C-section is a major underlying problem,’ explains MA Stinson.

‘Early life is a critical time for the development of our microbiomes and it can have long-lasting effects on our health. I’m looking forward to larger and more robust studies of the fetal and newborn microbiomes.

‘We may yet find ways to manage our microbiomes for life-long health,’ she said. 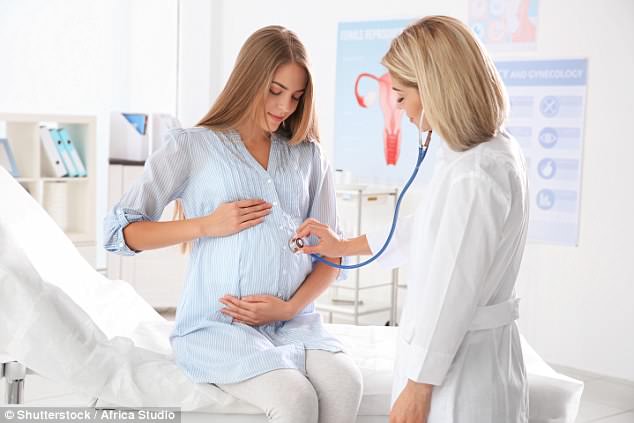 There is a growing concern that seeding could transmit deadly viruses, like chlamydia

There is a growing concern that seeding could transmit deadly viruses, like chlamydia.

Dr Christopher Zahn from the American College of Obstetricians and Gynecologists warns mothers who unknowingly carry often symptomless STIs like ‘silent’ chlamydia could transmit the infection to their newborns, which can cause fatal pneumonia.

Dr Zahn warns the act could infect children with the bacteria responsible for chlamydia and gonorrhea if their mothers are unaware they have an STI.

Mothers could also potentially transmit the herpes virus, which can be symptomless in adults but fatal in newborns if it spreads to their organs.

These pathogens can also be transmitted to children born vaginally, however, the risk is more apparent when the infected fluid is directly applied to babies’ faces.

‘Understandably, patients who may need to undergo a c-section are increasingly seeking counsel from ob-gyns on whether vaginal seeding is appropriate. However, due to the lack of sufficient data, the very real risks outweigh the potential benefits.’

He recommends women help c-section born babies overcome their lack of vaginal fluid exposure by exclusively breastfeeding them for the first six months.

Dr Zahn said: ‘The bacteria present in breast milk and on the nipple is sufficient for natural colonization or seeding of the gut.

‘There may be some initial difference in the gut microbiota of infants based on mode of delivery, but research has shown that difference disappears after about six months.’