A pensioner was left on the verge of tears after thieves raided his allotment – and stole the vegetables he was growing to see him through the winter.

Bill Mason was heartbroken when thieves raided his vegetable patch, because he is now worried about having enough food this winter.

The 76-year-old pensioner from Littlehampton, West Sussex likes to spend between four and five hours a day tending to his plot. 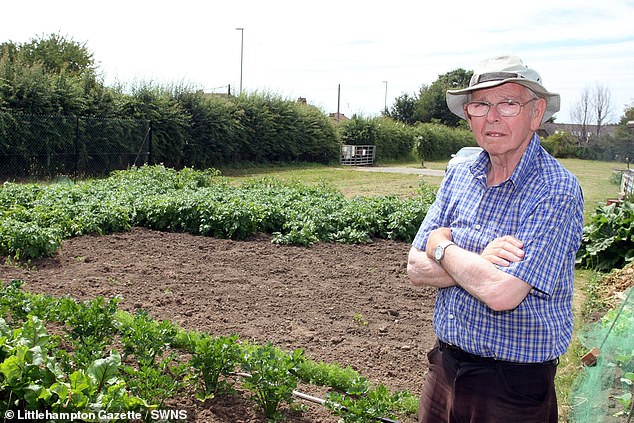 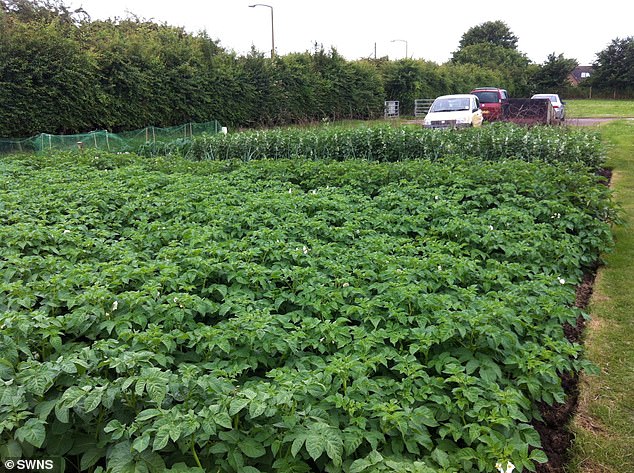 Mr Mason planted a large field of potatoes, pictured, some of which have been stolen

He says he will have to ration his food this winter after half of his potato crop, spring onions, beetroot, cabbages, lettuce, rhubarb and celeriac were stolen.

The retired engineering firm owner from Littlehampton, West Sussex, said: ‘I nearly cried when I saw it.

‘They have taken my livelihood away for no reason at all.

‘It is part of my pension; that is what hurts.

‘In the last 15 years I’ve been on this plot I’ve never had so many crops stolen as I have done over the last week.

‘It’s absolutely demoralising, I’m 76-years-old and quite frankly rely on this as part of my pension and to feed us and it’s been stolen.’

The lost portion of the potato crop equated to half a year’s supply for Bill and his partner.

He said they relied on the food from the crops to supplement their pensions and see them through winter but would now have to ration their food this year.

Bill added the £130 financial cost of the crops paled in comparison to the four or five hours of work he did each day that had now gone to waste.

He said this was the first time vegetables had been stolen from him from his allotment.

Calling for CCTV to be installed on the allotments, he said: ‘We get the odd vandal up there, but this was carefully planned; they took away what they pulled up.

‘It made me feel sick to be honest.

‘It is a joke; there is no security up there at all.’

He said: ‘I’ll struggle to feed myself this winter, but I’ll get by.

‘I was brought up during the war and we get by.

‘If someone came up to me and they were starving I would have willingly helped them out and I do if one of the allotment holders doesn’t have something – then we swap around – but I do detest people stealing it off your plot.’

He revealed a thief had stolen a massive 160kg of potato crop as well as a string of other fresh vegetables.

Cruel thieves even stole his pudding, after making off with all the rhubarb he was planning on putting in a crumble.

He said: ‘I felt terrible. I was sitting here having a cup of coffee and the phone rang and it’s the chap who had the plot next to me.

‘I rushed up there and quite frankly, I was shocked, there it was all stripped off, completely gone.

‘I usually have about 12 or 14 25kg bags of potatoes and nearly half of them are missing.

‘They took half of the spring onions, half of the beetroot, about four or five cabbage, three or four lettuces and they also took a massive growing bunch of rhubarb and an amount of early potatoes.

‘The thing is, I don’t grow it to be good – what I do is part of my pension.. I don’t put anything in my mouth that I haven’t grown myself – fruit and veg.

‘What happens is if someone takes it away they are taking food out of our mouths.

‘I go up there about four or five hours a day for five or six days a week and it’s done as a job.’

He added: ‘At the end of the day it keeps me fit and it keeps me healthy and I don’t eat anything that’s been sprayed.

‘This wasn’t done on a whim – someone had come there to steal stuff.

‘I don’t want it back but at the end of the day think before you take people’s food out of their mouths.’

He was reluctant to speak about his partner or his late partner Liz Brett, with whom he won Littlehampton Town Council’s annual Best Allotment award from 2007 to 2009, the year she passed away.

A spokesman for Littlehampton Town Council said it would make the entrance more secure after buying land to the west of the site and apologised for the ‘distress and upset’ the theft had caused.

Sussex Police are appealing for witnesses after he discovered the raid on July 2.