A woman has come under fire for announcing she thinks cats are ‘evil’ and should be banned in the UK – because they are killing too many birds.

According to British journalist Sally Jones, domestic felines should be kept inside whenever possible and – if they have to be let outside – it should be within a netted run.

However during the debate on banning cats on Thursday’s This Morning, cat lover Holly Willoughby – who has her own pet Bluebell at home – jumped to their defence, saying it was in their nature to hunt their prey.

Viewers at home also got their claws out on Twitter, blasting Sally for being an ‘imbecile’ and arguing that her line of thought suggested humans should be banned as well. 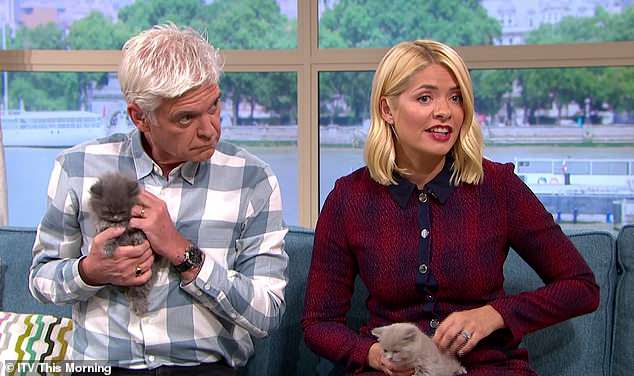 Following news that a town in New Zealand had banned residents from owning any new cats to encourage natural wildlife, Holly Willoughby jumped to the furry felines defence when calls for the ban to be adapted in the UK were made by a journalist

The debate follows reports that a town in New Zealand is treating cats as pests because they kill native birds, and has banned residents from owning any new ones.

Sally suggested the plan could be adapted to the UK: ‘Perhaps not the entire ban but what I would like to see is cats being prevented from killing the sheer number of birds and animals that they do.’

‘How do you propose we do that?’ Holly asked.

‘[By] trying to keep cats inside. Make sure that feral cats are spayed, neutered, microchipped etcetera.

‘The problem is even domestic cats kill 55 million birds every year, some of these really beautiful, protected species. Some of them ordinary birds like house sparrows and starlings, but even those you are seeing the numbers dropping…

‘Cats aren’t the only things that prey on them, humans themselves are some of the worst culprits for depriving birds of their habitats.’

Philip Schofield pointed out, as he and Holly picked up a fluffy grey kitten each: ‘There’s no actual scientific evidence that that sort of mortality is causing birds to decline.’ 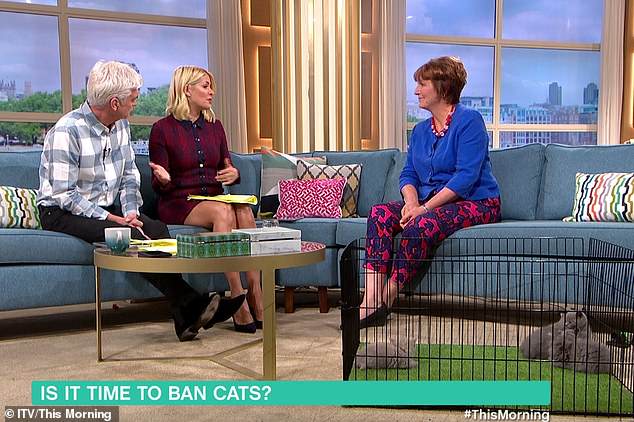 There is no science to back up the mortality rates of birds, but Sally insisted that because they were ‘natural born killers’ they were the main culprits and thinks there should be a partial ban 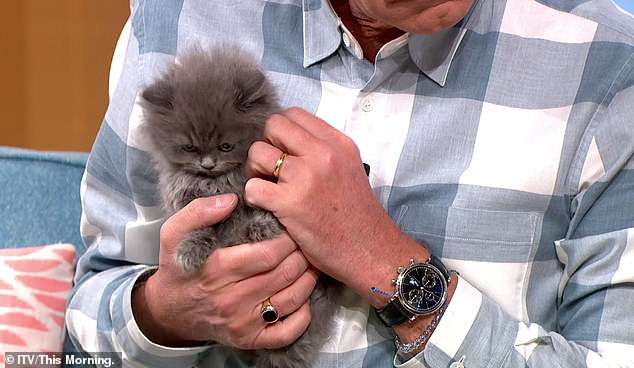 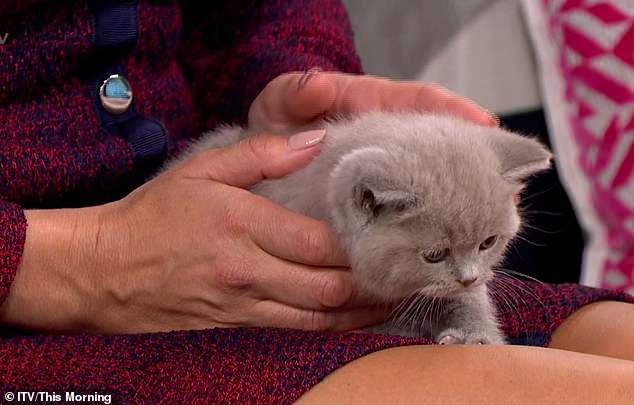 ‘I know I lost the debate the moment you brought in the kittens, they’re beautiful, but they’re also natural born killers,’ Sally complained.

Holly defended the furry creatures: ‘But we do have a relationship with these pets, they come into our home.’

‘A lot of people say their pets keep them calm, they help with anxiety. ‘They help a family understand what it’s like with the first thing of bereavement, is that a pet that’s died. It’s brilliant for so many other things.’

Sally refused to accept Holly’s reasoning: ‘Why should they have to be let out at night and the day to go and hunt and hunt?’

‘But it’s nature. Are we not interfering with nature?’ Holly pushed.

Sally claimed that people had ‘already interfered with nature’, and that there was an ‘overspill’ of cats.

She argued: ‘I’m not saying get rid of all of them, but control where they go. It would be easier to let a cat go outside, but in a netted run.’ 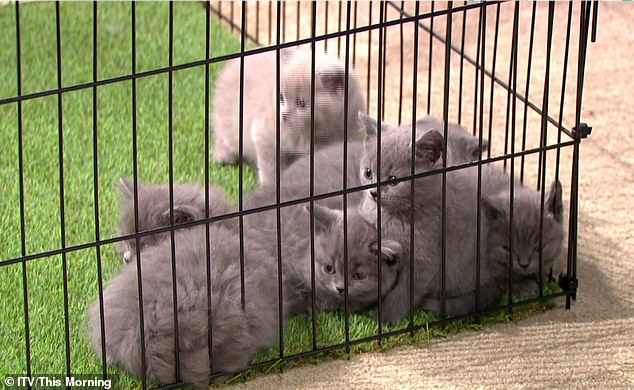 The fluffy kittens were in the studio as part of the debate on banning cats. Holly said that the pets often helped people in different ways and that they were essential for learning how to care for animals 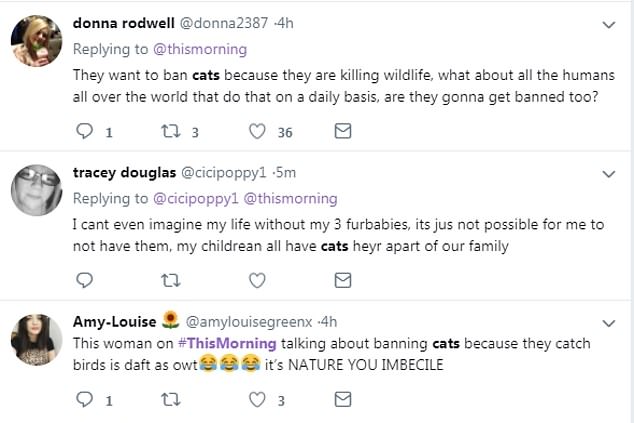 Holly questioned why Sally believed birds were a higher priority than cats, and the journalist said it was because they were part of a ‘natural ecology’.

Viewers, however, were in agreement with Holly and blasted Sally for her views.

‘This woman on #ThisMorning talking about banning cats because they catch birds is daft as owt it’s NATURE YOU IMBECILE,’ fumed one.

‘They want to ban cats because they are killing wildlife, what about all the humans all over the world that do that on a daily basis, are they gonna get banned too?’ asked one.

‘This topic on #ThisMorning is really aggravating me. The biggest threat to wildlife is humans, not cats. HUMANS are responsible for destroying nature. Absolutely ridiculous. Let’s ban murderous people instead,’ a third said.