Not one, not two, but three guests at the royal wedding wore a dress featured in Lifetime’s made-for-TV movie Harry & Meghan: A Royal Romance, leaving some people questioning whether the fashion faux pas was really a coincidence – or an intentional dig.

Fashion blogger Michaela O’Shaughnessy shared a photo of one of the guests arriving, tweeting: ‘OMG one of the guests is wearing the same outfit from when Meghan met the queen in the Lifetime movie! #RoyalWedding.’ 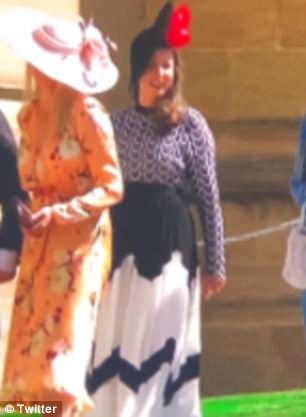 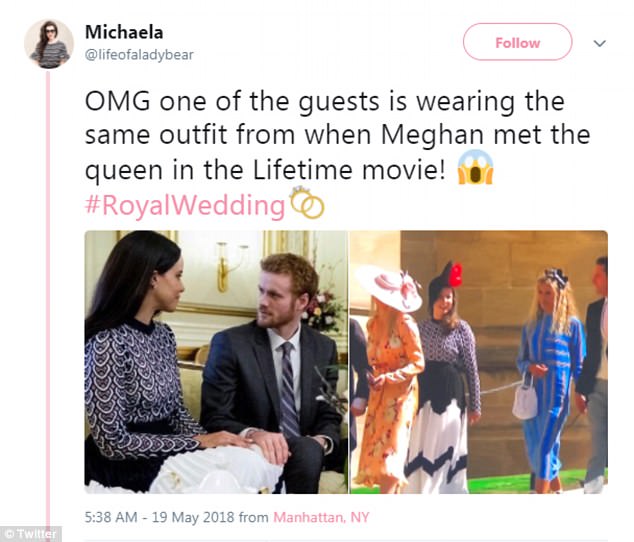 Seeing double: Fashion blogger Michaela O’Shaughnessy shared a photo of one of the guests arriving wearing the $580 dress by Self-Portrait 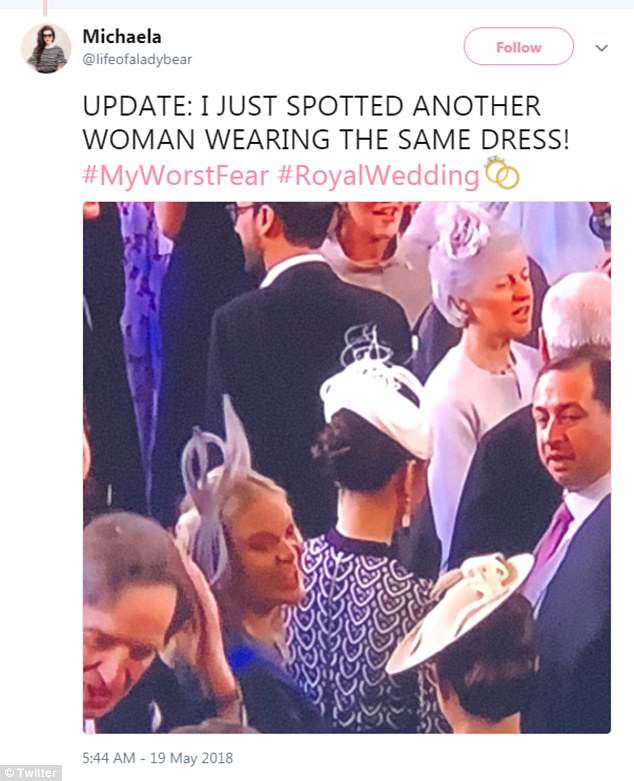 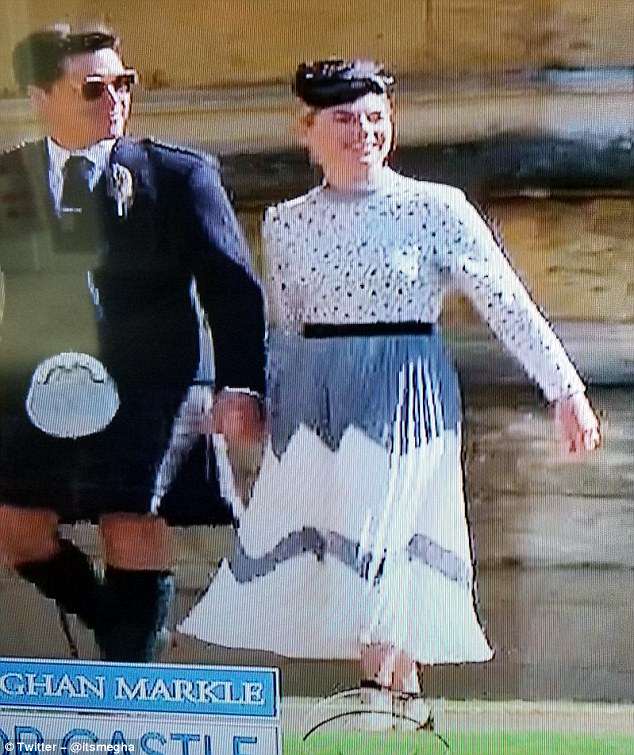 Third time’s a charm! Another woman was seen wearing the same design in a reverse colorway, with a navy design printed on a white background

However, she quickly realized that someone else was also sporting the very same frock featured in the film inspired by Harry and Meghan’s romance.

‘Update: I just spotted another woman wearing the same dress! #MyWorstFear #RoyalWedding,’ she added while sharing a photo of the second wedding guest.

A beady-eyed follower who tweets under the name of @itsMegha then responded to say that she had seen a third woman wearing the design – this time in the reverse coloring; instead of navy with a white pattern, this woman opted for white with a navy pattern.

In the movie, Parisa’s character wears the original navy and white pleated midi dress to meet Queen Elizabeth II (Maggie Sullivun) for the first time, but it’s unclear what came first for the three royal wedding guests: the movie or the choice of dress.

In a subsequent tweet shared in the comments section of her post, Michaela admitted that she was ‘honestly embarrassed’ that she noticed; however, she wasn’t alone.

‘I can never remember if I locked the front door, but for some reason that outfit is stuck in my memory,’ one person tweeted. 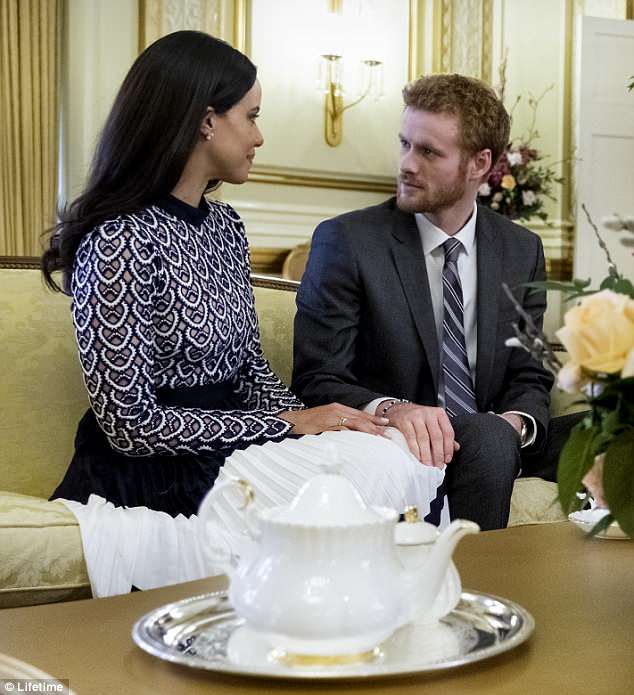 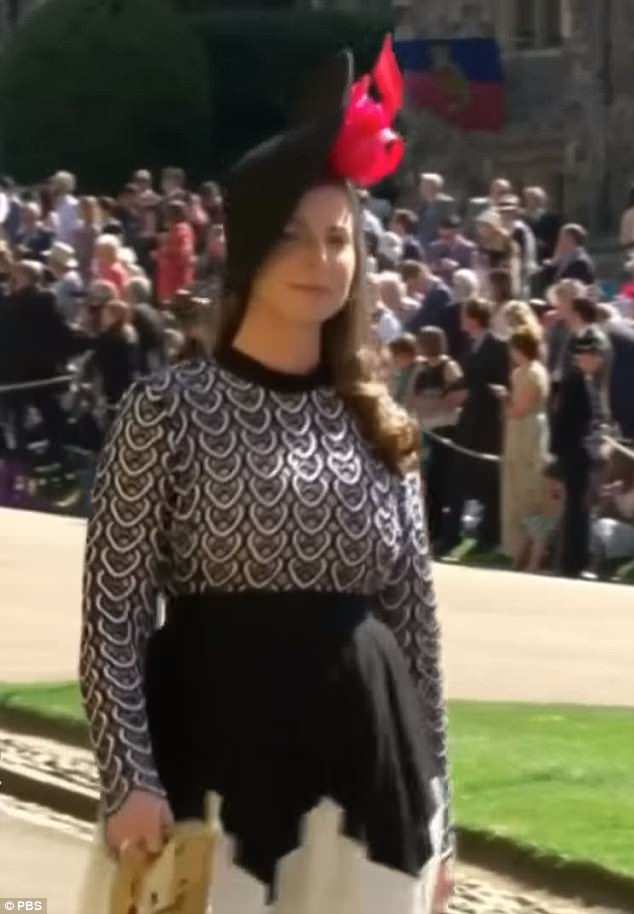 Custom fit: The woman wore a full-length version of the pleated midi dress

‘I saw the dark haired woman, walking to the chapel with a man, some of the earliest to arrive. I did a double take when I spotted the blonde,’ someone else added.

‘I can only imagine them running into each other. Now they are in a “Who Wore It Best” three-way with a movie lol.’

Another person applauded Michaela for her keen observation, tweeting: ‘Nothing escapes the sleepless eyes of the Internet… well done.’

Actor Jemaine Clement tried to identify one of the women as Harry’s cousin Princess Eugenie, but the one half the comedy duo Flight of the Conchords was later corrected.

‘Anyone with a funny hat is Eugenie to me,’ he explained, referencing the avant-garde fascinators that the princess has worn over the years. 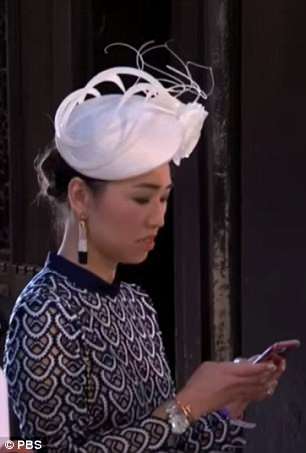 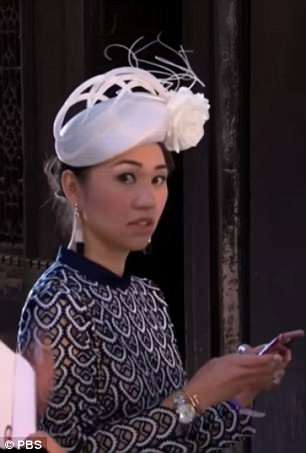 Accessories: The other unidentified woman paired her dress with a white fascinator and dangling earrings 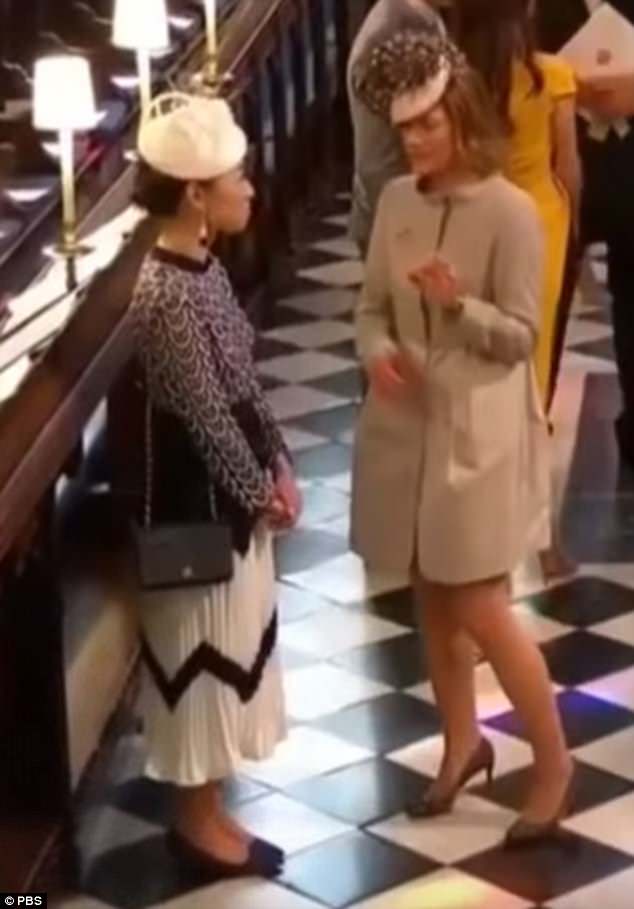 Different look: The female attendee’s dress was mid length, and she paired it with delicate flats 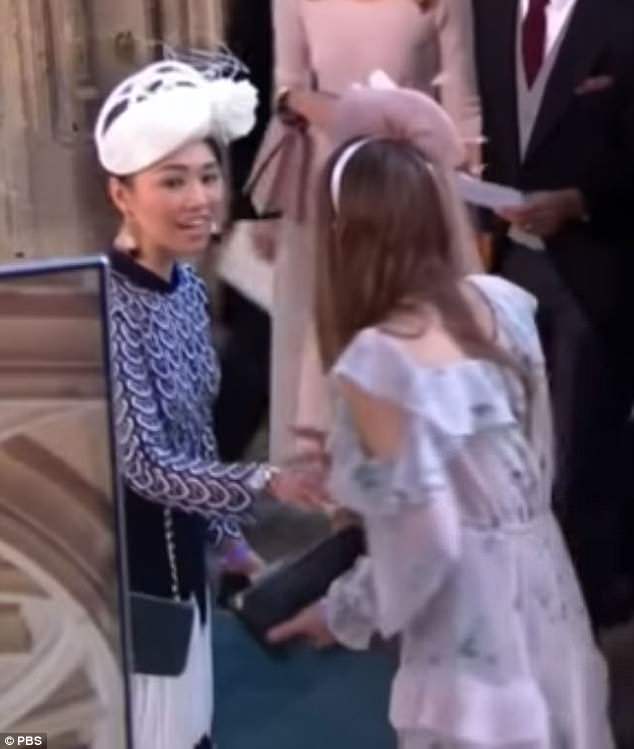 Meet and greet: The woman was seen shaking hands with fellow guests before the wedding started 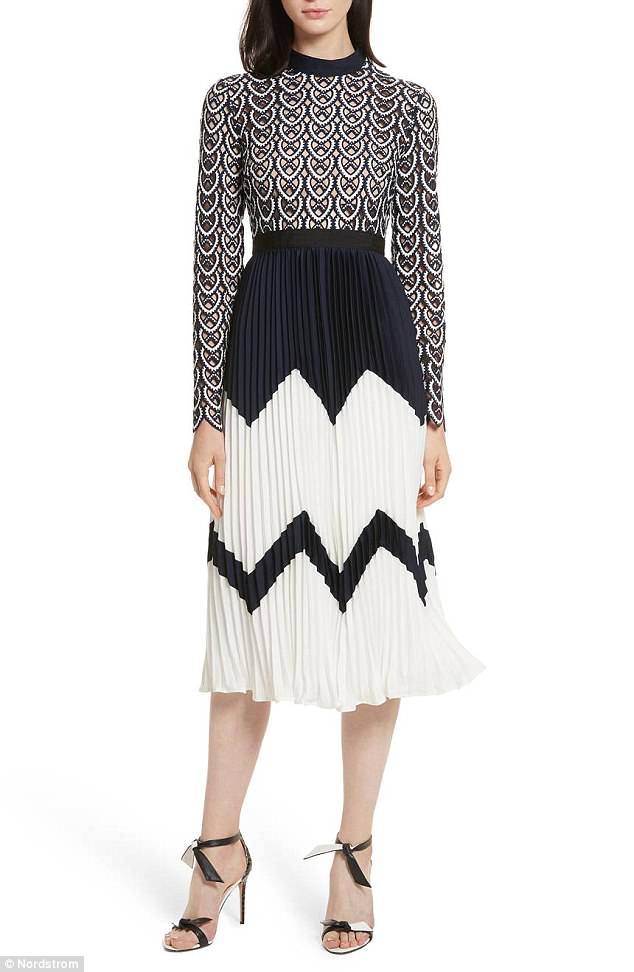 Inspiration: The crochet and pleated dress is by Self-Portrait, a brand that the real-life Meghan has worn in the past

While some people found the outfit choices to be incredibly awkward, others thought it may have been an intentional insult.

However, it could have easily been a coincidence, as Claudia Da Ponte, the Lifetime movie’s lead costume designer, wanted to keep the outfits worn by the character of Meghan as ‘authentic as possible.’

She also looked to the former Suits actress’ social media accounts before they were shuttered in January.

Candid: In a subsequent tweet shared in the comments section of her post, Michaela admitted that she was embarrassed that she recognized the dress

No shame here: Others agreed that they can’t stop thinking about the dress either

‘Well done’: One person applauded her for her efforts, tweeting: ‘Nothing escapes the sleepless eyes of the Internet’ 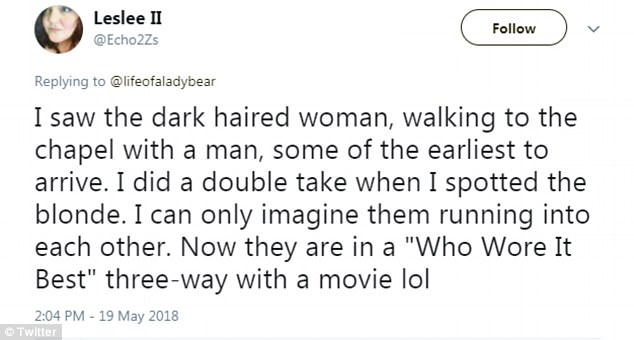 Funny: One woman joked that the women ‘are in a “Who Wore It Best” three-way with a movie’

Intentional dig? While some people found the outfit choices to be incredibly awkward, others thought it may have been an intentional insult

Good point: One person joked that the outfit choice was an example of dressing ‘for the job you want’

‘We were able to piece together a timeline of roughly what she wore and then, basically, we used brands she actually wears in real life and we just tried to match everything to reality as much as we could,’ she explained.

Meghan and Prince Harry — now the Duke and Duchess of Sussex — tied the knot at St. George’s Chapel in Windsor Castle on Saturday after months of speculation about who would design her wedding gown.

While couture label Ralph & Russo was touted as the hot favorite, the bride nodded to her husband’s heritage and her self-proclaimed feminist ideals by choosing British designer Clare Waight Keller, who joined the house of Givenchy last year as its first female artistic director.

Featuring an open bateau neckline and a triple silk organza underskirt, Meghan paired the minimalistic design with the Queen Mary Diamond Bandeau tiara, which was made in 1932 and features a center detachable brooch made of ten diamonds dating back to 1893.

Her 16-foot Cathedral length veil was also a nod to British heritage and featured a trim of hand-embroidered flowers from each of the 53 counties in the Commonwealth. 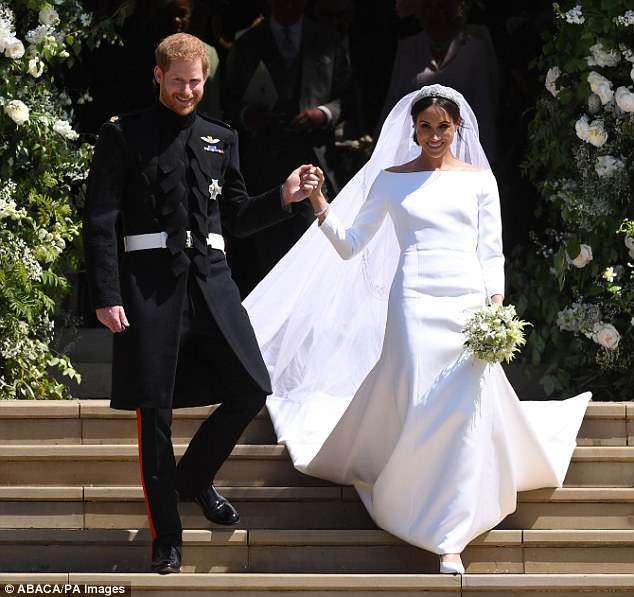 Big day: Meghan, 36, wore an elegant Givenchy gown by British designer Clare Waight Keller to say ‘I do’ to Prince Harry, 33, on Saturday

Just as stunning: The newly-minted Duchess of Sussex changed into white silk crepe gown featuring a high collar designed by Stella McCartney for the evening reception

Designer Clare Waight Keller told People that the idea came to her after several conversations with Meghan about what ‘story’ she wanted to tell through her wedding.

‘There was a conversation early on about the story that we were going to tell through this wedding,’ she said.

‘Part of what I wanted to do was talk to her about what type of stories they could be. The fact that her and Prince Harry will be working a lot in the Commonwealth was something that I thought was really intriguing and could be something built on to be part of the day.’

‘I am so proud and honored to have been chosen by the Duchess of Sussex to make her evening gown and represent British design,’ the designer told WWD.

‘It has truly been one of the most humbling moments of my career and I am so proud of all the team on this stunning sunny royal day.’