Tiger killed by mate in front of visitors at Copenhagen Zoo

A tiger has been killed by another after the two animals began fighting in front of shocked visitors at a zoo in Copenhagen, Denmark.

A male Siberian tiger suddenly attacked one of the two females in their shared enclosure at Copenhagen Zoo and a brutal fight ensued.

Miron the Siberian tiger had arrived from Moscow, Russia, just three weeks before the deadly attack, as part of a breeding programme to help save the species.

Shocking: A picture taken by a visitor shows the female tiger lying dead in the enclosure after the fight at Copenhagen Zoo

The incident took place around 3pm on Thursday afternoon in front of a number of visitors, who alerted zoo staff.

However, by the time staff arrived, the female tiger was already dead.

Lars Holse, divisional head of Copenhagen Zoo, told local media that the tigers had been through ‘a normal introductory process, where they first meet through bars and then in the enclosure a couple of weeks ago’.

‘There had been no signs of animosity from the beginning that indicated that such a violent attack would take place, he told Ekstrabladet. 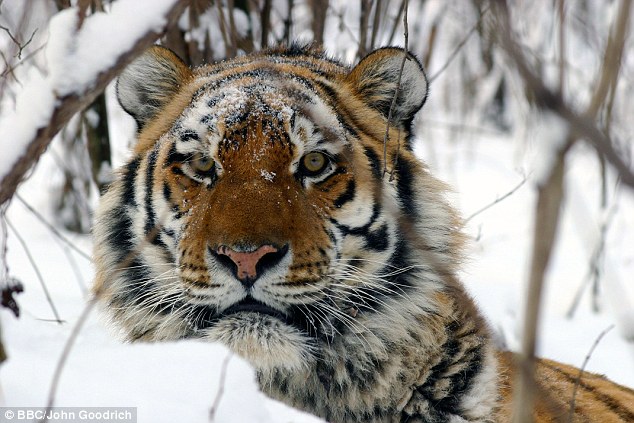 Rare: With the Siberian tiger on the verge of extinction, the Russian tiger had been brought over to Denmark in the hopes that he would mate with the females (not pictured)

The male tiger only sustained a few scratches and did not need veterinary attention.

It will be kept separately from the only remaining female for the time being, Ekstrabladet reports.

The Siberian tiger, also known as the Amur tiger, as in endangered species with only around 540 still alive in the wild.

Miron had been brought over to Denmark from Moscow Zoo as part of conservation efforts in the hopes that he would mate with the two females.