He’s invited Tillerson to his weekly luncheon with the vice president.

The trio will dine at the White House before a separately scheduled meeting between the president and his education secretary, Betsy DeVos.

Trump and Tillerson will hold talks with Finland’s president later in the afternoon, a visit that will culminate with the two heads of state taking questions from the press.

Yesterday, Tillerson hinted that he wasn’t impressed with Trump’s response to the recent racial violence in Charlottesville, which left one young woman dead at the hands of a Nazi sympathizer.

‘The president speaks for himself, Chris,’ Tillerson told Fox News’ Chris Wallace after the Sunday show host asked him if the president’s response to the violence made it harder push American values worldwide.

President Donald Trump with break bread with Secretary of State Rex Tillerson this afternoon. Tillerson said Sunday that the president ‘speaks for himself,’ when asked if President Trump’s response to Charlottesville has made it harder for the top diplomat to promote American values 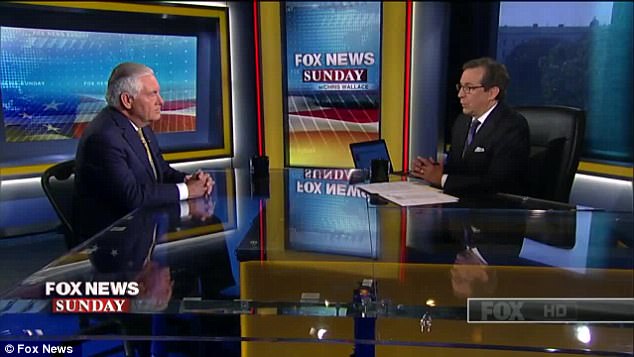 ‘The president speaks for himself, Chris,’ Tillerson told Fox News’ Chris Wallace after the Sunday show host asked him if the president’s response to the violence made it harder push American values worldwide 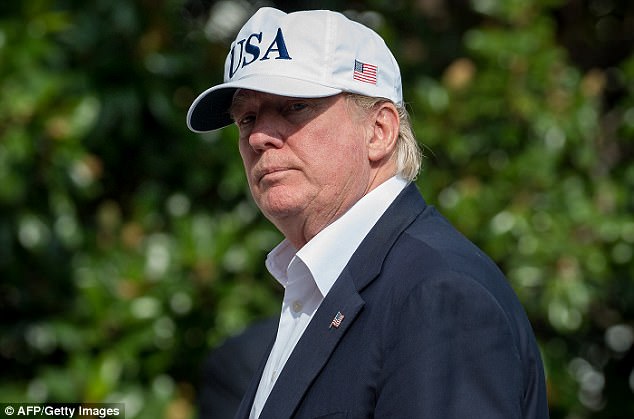 Rex Tillerson was the second high-profile person in the political world to express frustration over President Trump’s Charlottesville response on Sunday. Former Vice President Joe Biden spoke out against Trump in an op-ed

Wallace had brought up the ‘early warning’ the United States had received Wednesday from a United Nations committee, in which members expressed concern after seeing the overt signs of racism on display in Charlottesville at the ‘Unite the Right’ rally.

‘We are alarmed by the racist demonstrations, with overtly racist slogans, chants and salutes by white nationalists, neo-Nazis, and the Ku Klus Klan, promoting white supremacy and inciting racial discrimination and hatred,’ the committee’s chair Anastasia Crickley said.

Wallace asked Tillerson about the warning and about Trump’s most recent response to Charlottesville, which consisted of blaming the media for the coverage of the rallies.

‘The only people giving a platform to these hate groups is the media itself and the fake news,’ Trump had said in Phoenix on Tuesday night.

Wallace wanted to know if Trump was making it harder for Tillerson to tout American values, when foreign leaders were questioning the president’s own values.

‘And that message has never changed,’ he added.

Wallace, however, pointed out that ‘when the president gets into the kind of controversy that it does and the U.N committee responds the way it does, it seems to say they begin to doubt our – whether we’re living those values.’

Wallace followed up. ‘And the president’s values?’ he asked.

The secretary of state pointedly said that Trump speaks for himself.

He was the second prominent figure in politics to pan the president’s Charlottesville response on Sunday, with former Vice President Joe Biden penning an editorial for the Atlantic, lambasting Trump for ’embolden[ing] white supremacists.’

Tillerson is a member of Trump’s cabinet, however, not a voice from the opposing political party.

Wallace asked Tillerson if he was separating himself from Trump’s comments, and the former ExxonMobil chief executive did not say no.

‘I’ve spoken – I’ve made my own comments as to our values as well in a speech I gave to the State Department last week,’ Tillerson responded, exposing a rift between himself and Trump on the topic.