The men’s basketball team at tiny St. Olaf College in Minnesota nearly capped a dramatic 17-point comeback with an unbelievable buzzer-beating tip-in on an in-bounds pass against Augsburg were it not for officials erroneously waving off the would-be game winner.

Division III, the lowest level of NCAA basketball, does not have the capacity for video replays, which was a significant factor on Wednesday night.

Trailing by a single point with just 0.2 seconds remaining, St. Olaf ran a perfect inbound play. Without enough time to catch and shoot the ball, the Oles set up senior Troy Diggins Jr. for a tip-in at the buzzer.

Diggins jumped into the crowded lane, the inbound pass managed to find his hands, and he miraculously directed the ball into the basket before the final buzzer. 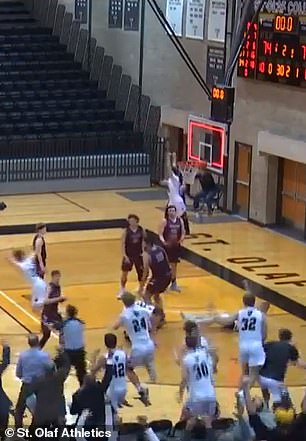 Trailing by a single point with just 0.2 seconds remaining, St. Olaf ran a perfect inbound play. Without enough time to catch and shoot the ball, the Oles set up senior Troy Diggins Jr. for a tip-in at the buzzer. Diggins jumped into the crowded lane, the inbound pass managed to find his hands, and he miraculously directed the ball into the basket 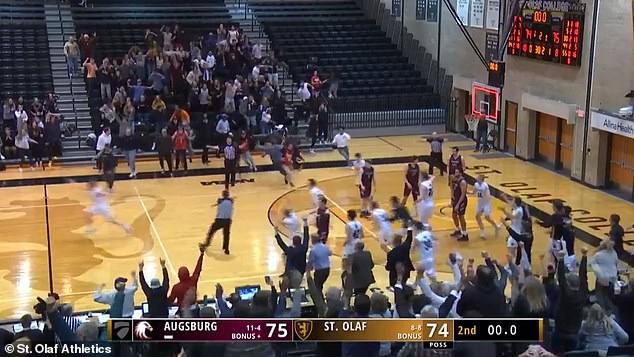 As fans began to run out on the court, all three officials can be seen waving off the basket

But just as St. Olaf players and coaches began celebrating, the sound of referees’ whistles brought the festivities to a sudden end.

Officially, the refs claimed, Diggins did not get the shot off in time, but a screen grab posted by Diggins’s father proved otherwise.

The ball had clearly left Diggins’ hand before the red light flashed, signalling the end of regulation. (In basketball, a made buzzer-beating shot counts so long as the ball left the shooter’s hand before the clock struck 0.0; it does not matter if the clock had expired before the ball went completely through the hoop)

Officially Augsburg escaped with a 75-74 win. Afterwards officials gave a different explanation, erroneously telling St. Olaf that Diggins’ use of two hands on the final tip was prohibited.

‘At the conclusion of Wednesday night’s men’s basketball game, the officials informed us that a tip-in with less than 0.4 seconds left is only permissible if tipped with one hand,’ read a statement from St. Olaf athletic director Ryan Bowles. ‘Since then, the officials and Minnesota Intercollegiate Athletic Conference (MIAC) has recognized the mistake in the application and interpretation of the rule and has apologized for the error. 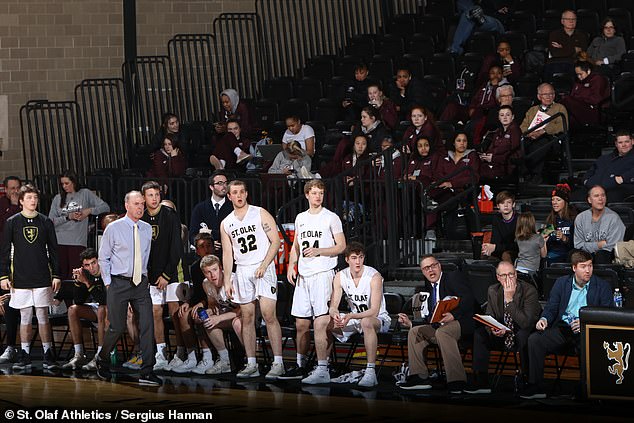 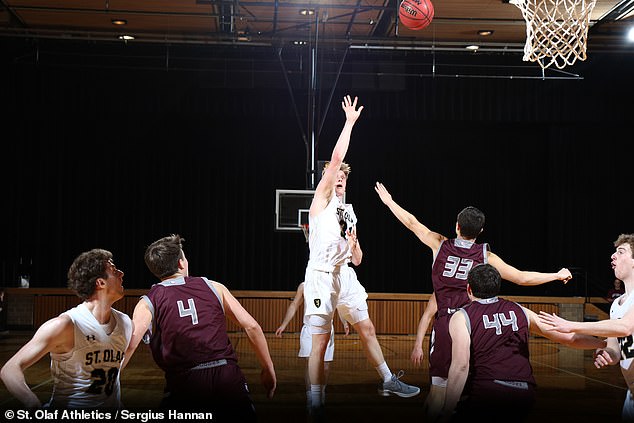 Although his final tip didn’t count, Troy Diggins Jr. (center) finished with 16 points in the loss

‘We have explored options and there is not an avenue in NCAA basketball to appeal results once a game has concluded. While the result of the game is not what we believe is correct, we also realize that human error is a part of athletics and officiating is a difficult task.

‘This situation is an opportunity for our men’s basketball coaches and student-athletes to apply the life lessons taught through sport, perseverance, and to respond by putting this loss behind them and prepare for our next opponent.’

Rule 5:Article 19 of the NCAA basketball rule book does not stipulate that the offensive player can only use one hand on a tip-in (or tap) with less than 0.4 seconds remaining.

‘In any period, when the game clock displays 10ths of seconds and play is to be resumed by a throw-in or a free throw when 3/10 (.3) of a second or less remains on the game clock, a player may not gain control of the ball and attempt a try for a field goal,’ the rule reads. ‘Such player can only score a field goal by means of a tap of a pass or of a missed free throw.’

That NCAA rule originated with the NBA’s notorious ‘Trent Tucker rule,’ which was adopted in the 1990-91 season after New York Knicks guard Trent Tucker beat the Chicago Bulls by taking an inbound pass with 0.1 second remaining and hitting a game-winning three-pointer.