Tokyo Olympics: Meet the three Aussie women through to the javelin finals at the Tokyo Games

A medical student at Stanford, the reigning world champion and a veteran: Meet the THREE Aussie women through to the javelin finals at the Tokyo Games

A medical student, a reigning world champion and a javelin veteran have thrown themselves into the spotlight at the Tokyo Olympics

Australian trio Mackenzie Little, Kelsey Lee Barber and Kathryn Mitchell are through to the women’s javelin final on Friday night.

It’s the first time Australia has had three finalists in an Olympic throwing event.

A medical student at Stanford, Little, 24, set a new personal best with her first ever attempt at the Olympics with a throw of 62.37m to qualify third for the final.

Her previous PB thrown of 61.42m last October out her sixth on the Australian All-Time list.

Reigning 2019 world champion Barber was on the cusp of being eliminated before saving her best for last with a season best 62.59m on her last attempt.

Barber, who finished second behind Mitchell at the 2018 Commonwealth Games on the Gold Coast was relieved to make the final on her final throw.

‘I am sure my coach gets a heart attack, putting him in the hot seat,’ she told Channel Seven afterwards. 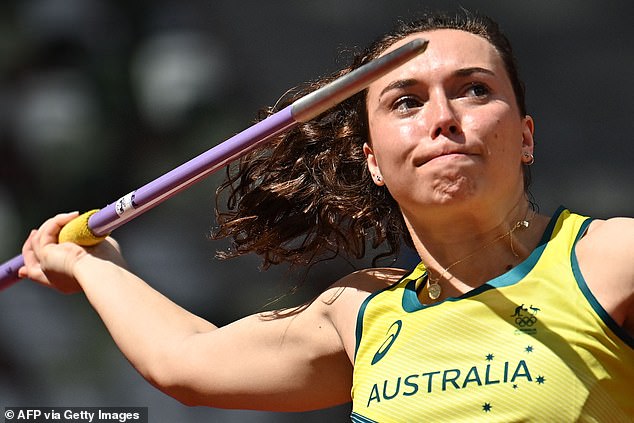 ‘I had a flashback to the Commonwealth Games, where (my throws) were pretty, they were neat – there was just nothing on them.

‘And I was not going out like that. That was my Rio experience and I was not having a repeat of that.

‘It was time to get fired up, be a competitor, be a performer and put something out there. I am really happy I did that.’

Barber described her form going into the Olympics as up and down.

‘I think the best way to describe the last couple of years has been character building, she said.

There’s been things thrown at me that I would never have anticipated as an athlete and as a person, and

I’ve had to find new ways to grow.  I am really happy to be here and I’m super, super excited for the final because, again,  I said in Rio I would be back out here ready to fight for a medal and I’m so in that space.