Tom Petty’s widow brands his daughters ‘unhinged’, accusing them of them of ‘destroying his legacy’

Tom Petty’s widow has explosively hit back at his two daughters’ in a new court filing, calling their behavior ‘unhinged’, ‘abusive’ and a detriment to their father’s legacy in the family’s latest dispute over the late singer’s estate.

His daughters want Dana – who was named the sole beneficiary of her husband’s estate – to put his assets in Petty Unlimited, an LLC created in the will, so that everything is equally divided. They also believe that together they should have ultimate control over his music, arguing that they have two-thirds of the vote.

The trio have already fought several battles over the release of Petty’s music, including arguments over content, release dates, credits and liner notes on compilations An American Treasure and The Best of Everything.

However, in a new court filing a defiant Dana has hit back at her step-daughters claiming their behavior has gone from ‘unconscionable to unhinged’ in the two years since their father’s death and ‘it needs to be stopped.’ 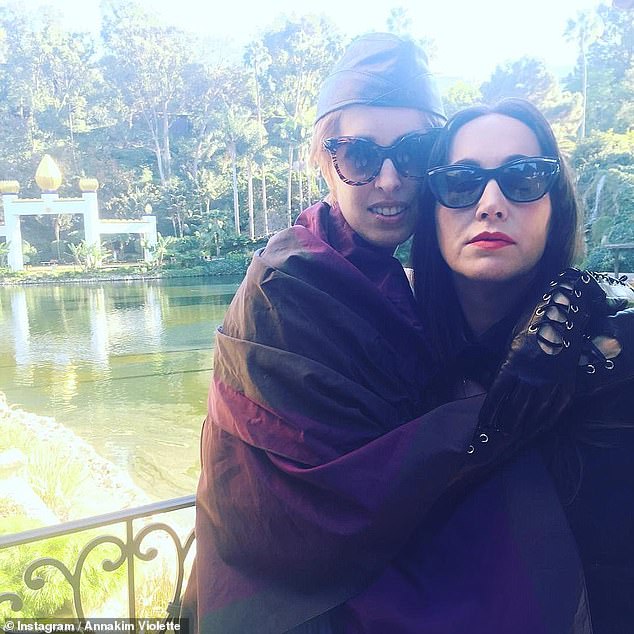 Tom Petty’s daughters Annakim Violette (right) and Adria Petty (left), pictured, want Dana to fund Petty Unlimited, an LLC created in the will, so that his assets are equally divided

‘Dana Petty would have done almost anything to avoid all of this,’ her lawyer Adam Streisand wrote in the filing obtained exclusively by DailyMail.com, objecting against claims made in Adria and Annakim’s suit.

‘Over the past weeks and months, however, the behavior of her stepdaughters Adria and Annakim has gone from unconscionable to unhinged – and it needs to be stopped.

‘Tom Petty entrusted his wife Dana to choose how all three women could work together to carry on Tom’s legacy. But Adria and Annakim thought they could bully Dana and cast her aside. In the process, they’ve threatened, maligned and sued the people Tom worked closely with for decades.

‘Her loyalty to her husband and the people he loved and trusted gave her the strength to fight, not only for herself, but for the whole Tom Petty and Heartbreakers family.’ 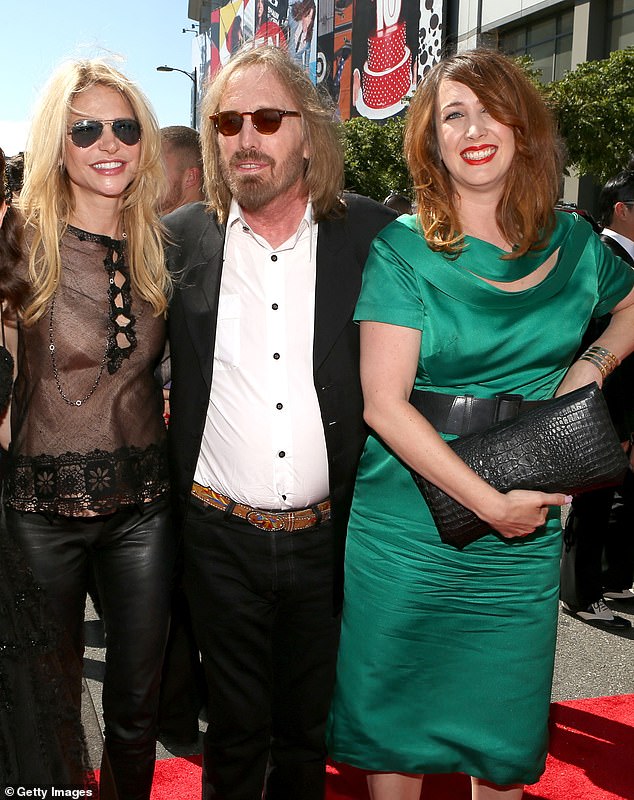 Dana (left) says she has ‘bent over backwards’ to accommodate the pair’s input despite her being under no legal obligation to do so. She cited Adria’s (right) behavior as being particularly ‘foul’

Tom Petty died in October 2017 following an accidental drug overdose. In his will, the 66-year-old named Dana as the sole trustee of his estate.

But in their suit, Adria and Annakim claim they’ve been unfairly excluded from having any involvement with preserving their father’s legacy, claiming to have been left out in ‘the cold and dark’ since Petty’s death.

The also accused Dana of ‘grossly mismanaging’ their father’s affairs.

Dana, however, has refuted the claims, saying she has repeatedly ‘bent over backwards’ to accommodate the pair’s input despite her being under no legal obligation to do so.

As thanks, Dana says the claimants have given her nothing other than ‘abuse, threats and lawsuits’.

Dana further claims that Adria has been particularly ‘foul’, a spate of recent behavior extending beyond Dana that has caused ‘enormous damage to many of Tom’s professional relationships.’ 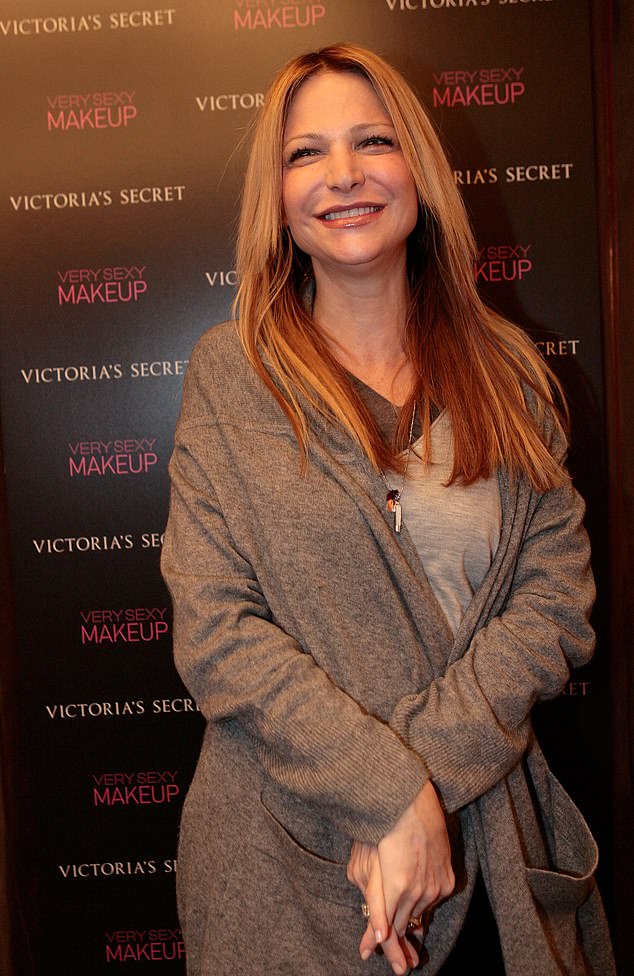 Dana was named as the sole trustee of Petty’s estate following his death from a drug overdose in October 2017, aged 66.

To substantiate her allegations, the suit details a series of texts exchanged between Dana and Adria, concerning the upcoming release of a four-CD box-set, An American Treasure.

Dana responded: ‘Adria, this is my husbands legacy and I have every right to be involved–why are you doing this?’

‘By the way, most everything you were working [on] was done without my knowledge. I was not included in any of the emails or decisions which isn’t cool– or legal,’ she added.

Adria answered Dana by calling her a ‘selfish and unkind woman’ and that if she wanted to take legal action she should just ‘say the word’. 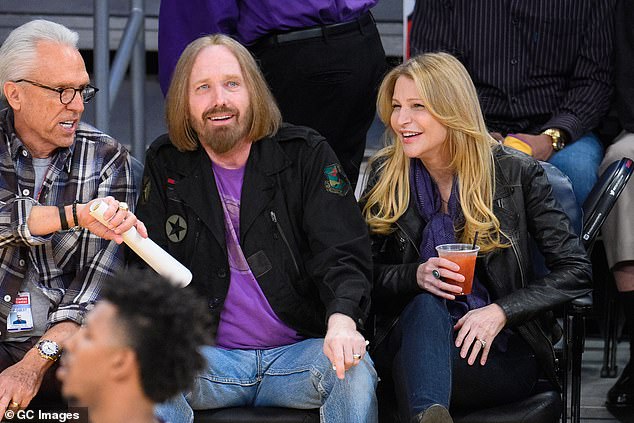 Dana further claims that Adria has been particularly ‘foul’, a spate of recent behavior extending beyond Dana that has caused ‘enormous damage to many of Tom’s professional relationships.’

Last month, Petty’s widow accused Adria and Annakim of trying to hinder her role as trustee, making it impossible to manage the lucrative estate.

According to Dana, the daughters are getting in the way of her including unreleased solo material on a 25th-anniversary reissue of his album ‘Wildflowers’, which she says could be worth millions in royalties.

Dana accuses Adria of false presenting herself as lead trustee of Petty’s estate to unlawfully hire an executive to oversee her father’s intellectual property without her consent.

Though at the time Dana says she relented, when ‘Adria’s bullying tactics failed to sway [the executive] on ideas he believed inadvisable, Adria turned on [the executive] and even spread vile and false rumors about him and Dana.’

Court documents also claim that ‘Adria wanted to authorize Tom’s name and likeness to be used to promote products akin to Paul Newman, whose face adorns bottles of salad dressing and so on.

‘But Tom would never have permitted such a thing, he never “sold out” while he was alive and refused to do any such thing despite numerous opportunities. Dana is certain Tom’s fans would also find it a sad perversion of Tom’s legacy.’

The widow is now requesting a judge intervene with her step-daughters’ perceived power-grab, asking that clear hierarchy be established to determine a chain of command. 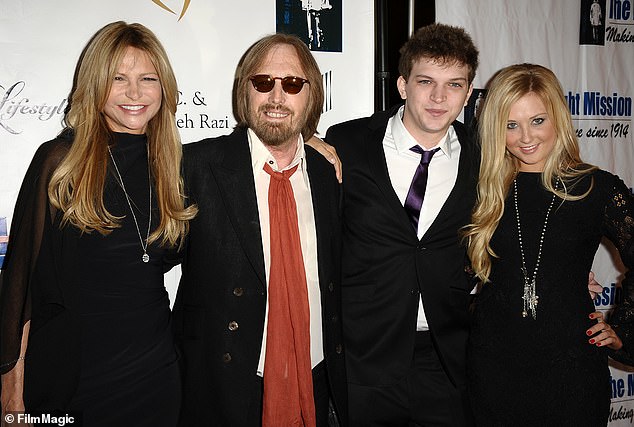 According to Dana (left), the daughters are getting in the way of her including unreleased solo material on a 25th-anniversary reissue of his album ‘Wildflowers’, which she says could be worth millions in royalties (pictured: Dana Petty, Tom Petty, Dylan Petty and guest attend the 11th annual Golden Heart Awards at The Beverly Hilton hotel on May 9, 2011)

Dana’s court filing outlines several motions that would allow her to take back full control of her late husband’s affairs.

Having set up a branch of the estate, named Petty Unlimited, for the two women as a gesture of goodwill – which allows them to input ideas and receive royalties – Dana is now requesting they be removed as managers of the trust.

‘Dana cannot continue to allow [the claimants] to continue down this path of destroying everything their father was about and all those he loved and trusted,’ her attorney wrote.

‘She created Petty Unlimited as a sign of good faith without any obligation to do so with the naive hope that her stepdaughters would change their behavior.’

Dana claims her stepdaughters did indeed change their behavior, ‘but in ways that have been reprehensible and unthinkable.

‘For the sake of the love she has for her husband, and the trust he placed in her, Dana cannot allow Daughters to sue everyone close to her late husband while using their so-called majority domination to destroy Tom’s legacy,’ the court filing details. 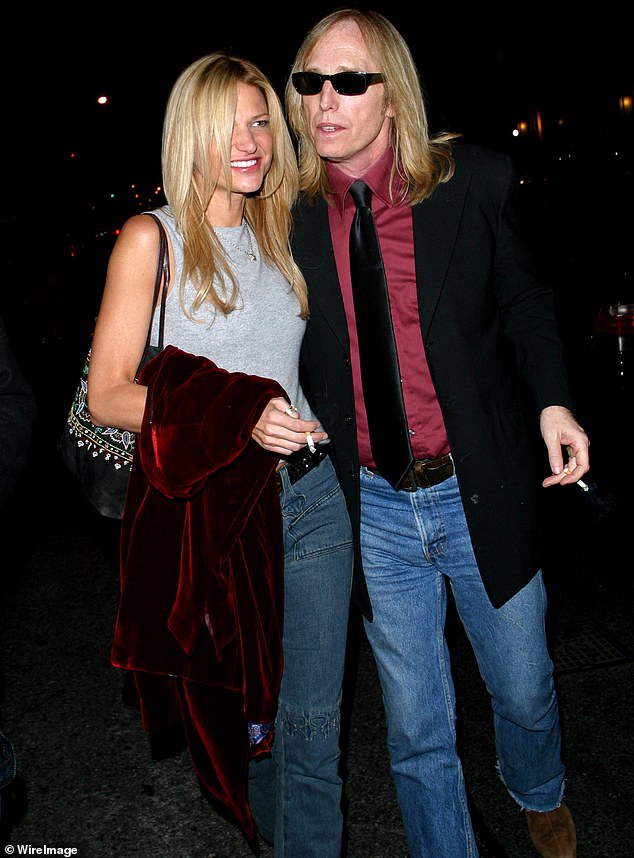 The family are fighting over how Petty’s music is released. They have already fought over details including content, release dates, credits and liner notes on compilations An American Treasure and The Best of Everything. Pictured: Petty and his wife in New York

Dana has also rubbished Adria’s claims that she has been actively excluded from making any business or creative decisions, citing a number of emails and texts documenting the extent of her influence.

‘Me and Mike and Ben picked the songs on this early on,’ Adria is quoting as saying in reference to the upcoming An American Treasure box-set. ‘[We] wrote them out on notecards knowing how they referenced dad or worked as examples of great unknown studio album tracks…And Dana and my Uncle and sister made recommendations after they were flushed out.’

Dana’s attorney says such transcripts disprove Adria’s accusations of being iced-out by his client, and instead show she’s been ‘actively involved in managing, and in fact, actively attempting to manage the Artistic Property solely and unilaterally.’

As a result, Streisand’s believes the sister’s lawsuit is based entirely on false claims and should be rendered void by a presiding judge.

During Petty’s career, he sold more than 80 million records worldwide, making him among the best-selling music artists of all time.

Petty’s daughters came from his first marriage to Jane Benyo – which ended in 1996 after 22 years. Petty and Dana York were married on June 3, 2001.