A Tory Euro MP blew up to £30,000 of Brussels expenses on a Brexit-promoting banquet for 200 guests and an office which is now boarded up, it was claimed last night.

Amjad Bashir is said to have used the European Parliament allowance to splash out on fine wines and lavish meals to promote his political career – and pay for his son’s parking fines.

The MEP for Yorkshire and the Humber, 66, who defected to the Tories from Ukip in 2015, held the £15,000 banquet in 2017 for guests including ex-Conservative Party chairman Patrick McLoughlin.

He paid up to a further £15,000 for an office in Halifax to boost his bid to become a Calderdale councillor, but it closed after he failed to win a seat in last May’s elections.

It is claimed Mr Bashir drew on MEP expenses to cover a £300 beer bill for ‘Amjad’s curry night’ at his family’s Manchester restaurant Zouk – attended by Home Secretary Sajid Javid during the 2017 Tory conference.

A whistleblower has alleged a further £500 in expenses paid for friends and family to attend a Pakistan charity dinner at a hotel.

His sons also used his Audi car – leased at a cost of £470 a month from expenses – with one racking up hundreds of pounds in parking fines.

Mr Bashir spent so much on entertaining that at one point a payment bounced because his MEP expenses bank account was in the red.

The disclosures follow protests at a ruling by EU judges last week to keep secret how MEPs spend £35million a year in expenses.

The European Court of Justice said that having to prove what they did with their taxpayer-funded sum of £3,930 a month might breach their privacy.

Campaigners claimed it makes it impossible for journalists to expose cheating MEPs in the same way the Westminster MPs’ expenses scandal was uncovered. 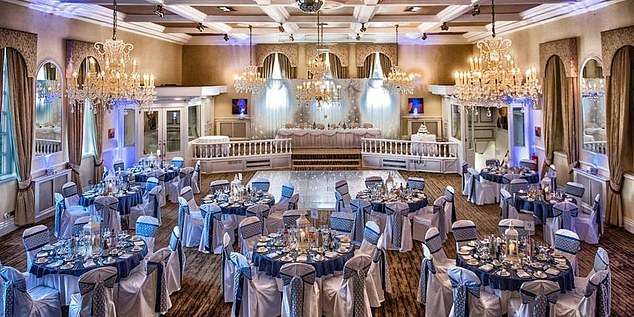 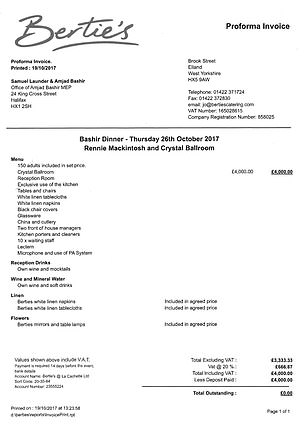 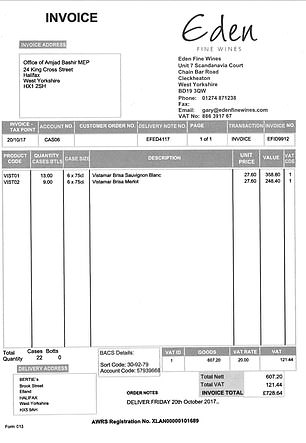 According to the whistleblower, Mr Bashir spent a third of his 2017 expenses on the lavish dinner for 200 people (pictured: receipts from the night)

It is not the first time Pakistani-born businessman Mr Bashir has been caught up in controversy.

He faced questions over his expenses when he defected from UKIP to the Tories in 2015. He claimed it was a ‘smear’ and has consistently denied any wrongdoing.

The flat-rate sum can be paid directly into their personal bank account and is meant to cover constituency costs such as office rent, phones, computers, conferences and exhibitions, hotel and restaurant bills, and travel.

The spending must be ‘directly linked to the exercise of their Parliamentary mandate’. Receipts are not required by Brussels, leading to claims it is open to abuse.

According to the whistleblower, Mr Bashir spent a third of his 2017 expenses on the lavish dinner for 200 people, mainly Tory supporters and friends, at Bertie’s Banqueting Rooms in Elland, West Yorkshire last October.

The glittering free event, entitled ‘Global Britain – Out Of The EU Into The World’, was not widely advertised to his constituents.

Mr Bashir made a speech about Brexit and Mr McLoughlin showered praise on him.

A well-placed source said: ‘The event had little to do with promoting the interests of Mr Bashir’s constituency. Nearly everyone there was a Tory or friend of Mr Bashir. It was primarily a social event to promote him and his political ambitions.’ 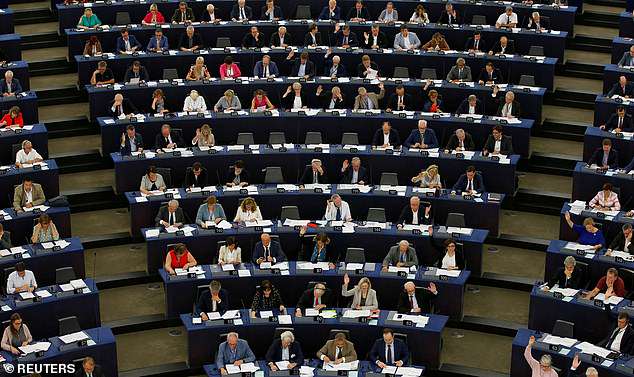 Pieter Cleppe, head of the Open Europe think tank, said the case illustrates that the European Parliament’s expenses system is extremely vulnerable to waste and abuse

Mr Bashir’s GEA expenses bank account statement – details of which have been made known to the Mail – shows he made a series of payments for the Bertie’s function staggered over several months.

No expense was spared to use the event to boost Mr Bashir’s image – he also paid £295 from expenses to hire a professional photographer.

The high cost of the Bertie’s bash sent Mr Bashir’s GEA account into the red. Embarrassingly, a £139 direct debit payment bounced on December 13 as he struggled to settle his Bertie’s bill.

In September 2017, Mr Bashir used his GEA account to pay the £500 bill for a table of ten guests at a dinner to raise funds for a Pakistan-linked charity, the Kashmir Education Foundation-UK.

Zouk was the venue for a curry night hosted by the MEP at last year’s Tory conference where Cabinet high-flyer Mr Javid was present.

A bill for £298 for Kingfisher beer for the function was paid from Mr Bashir’s expenses.

The whistleblower claimed the Audi A6 is used mainly by Mr Bashir’s sons Mudassar and Tayeb and the GEA account was used to pay parking fines.

Mr Bashir said last night: ‘I have nothing to answer for. I work very hard and do a job for my constituents. This is gutter politics.’

Later, he said in a statement: ‘My expenses have been thoroughly scrutinised and approved as within the European Parliament’s regulations.

‘Any events involving meals or drinks were entirely legitimate exercises in raising awareness about the EU and my role as an MEP.’

He defended his decision to use his MEP’s expenses to open a new office in Halifax last year and confirmed the office had closed.

He said he ‘hoped to re-establish an office there’.

Mr Bashir insisted he was the ‘chief user’ of the Audi A6 and did not claim any mileage allowance.

He added: ‘If any parking fine has been misclaimed by my office it will be repaid.’

Pieter Cleppe, head of the Open Europe think tank, said: ‘Regardless of whether or not rules have been broken in this case, it illustrates that the European Parliament’s expenses system is extremely vulnerable to waste and abuse.

‘It has been plagued by scandals and is in dire need of reform. It’s hard to argue that taxpayers should be paying for all of this and shameful that they refuse to tighten up the rules.’

A European Parliament spokesman said: ‘We do not hold records of MEPs’ expenses and do not comment on individual cases.

‘The GEA is intended to cover expenditure such as office costs, phones, postage and the purchase, operation and maintenance of computers.’