A draft executive order never signed by former President Donald Trump from December 2020 would have ordered the Defense Department to seize voting machines ‘effective immediately’ and appoint a special counsel to oversee claims of election fraud being pushed by Trump allies.

The order, which was obtained by Politico, lists a wealth of conspiracy theories that circulated amid Trump’s election overturn effort – including that voting machines by Dominion, Smartmatic and other voting machine and software firms had ‘flaws’ that were ‘subject to foreign interference in the 2020 election.’

The Dec. 16th order has a line for Trump’s signature at the bottom, and is prepared in Trump’s voice.

Details of the order, which is the first major piece of evidence to surface since Congress obtained information from the Trump White House, emerged on a day that Trump golfed at his Mar-a-Lago course.

Trump argued in lower courts that the documents could remain secret under executive privilege, which can ban Congress from seeing certain records.

Donald Trump was seen golfing at the Trump International Golf Club in West Palm Beach on Friday. A draft executive order prepared for Trump in December 2020 would have ordered the Defense Department to seize voting machines

‘I, Donald J. Trump, President of the United States, find that the forensic report of the Antrim County, Michigan voting machines, released December 13, 2020, and other evidence submitted to me in support of this order, provide probable cause sufficient to require action under the authorities cited above because of evidence of international and foreign interference in the November 3, 2020, election,’ the order begins.

The report does not identify the author, although the date came just days before ‘Kraken’ lawyer Sidney Powell pitched the idea of seizing voting machines, according to reports at the time.

It came after the Electoral College met, but weeks before Congress met to count the votes, with Trump allies still fighting a rearguard action to try to overturn the result.

Trump’s lawyers sought to keep the document and other White House information out of the hands of the House January 6th committee, although it began receiving documents this week after a Supreme Court ruling against Trump. 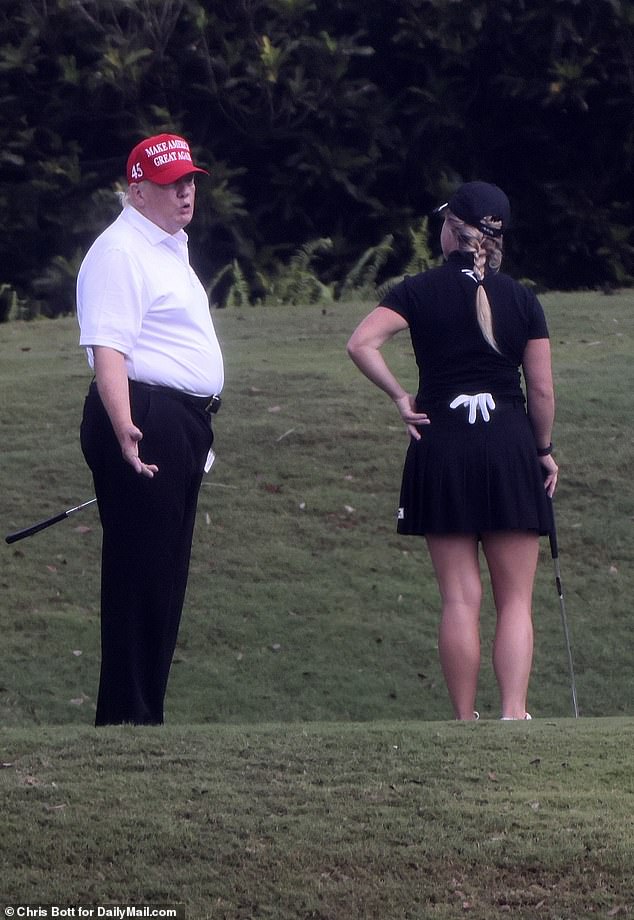 Trump’s time on the course came on a week when he suffered legal setbacks, including at the U.S. Supreme Court, which ruled the House could gain access to White House papers pending a court fight 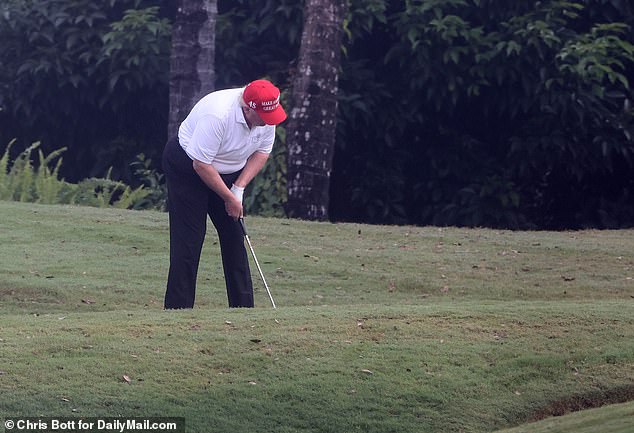 Trump golfed near his Mar-a-Lago club 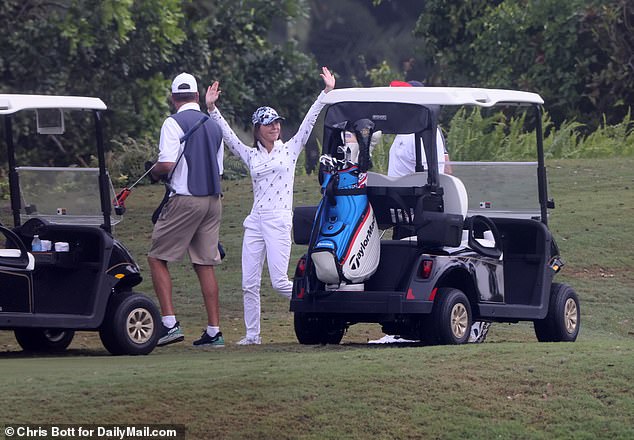 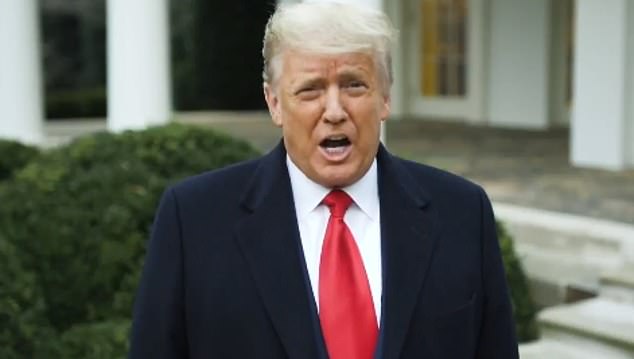 A December 2020 draft executive order, unsigned by President Trump, would have ordered the Defense Secretary to seize voting machines. A draft speech also has Trump telling Capitol rioters: ‘You belong in jail’ 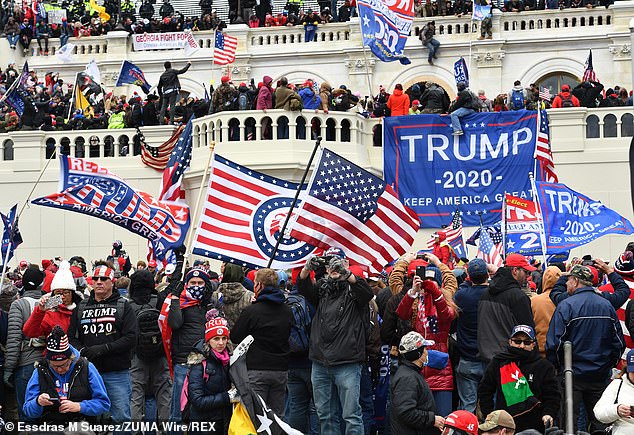 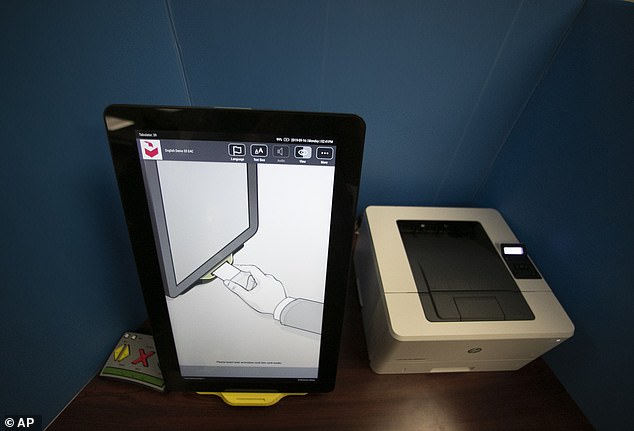 The order would have directed the Pentagon to seize voting machines 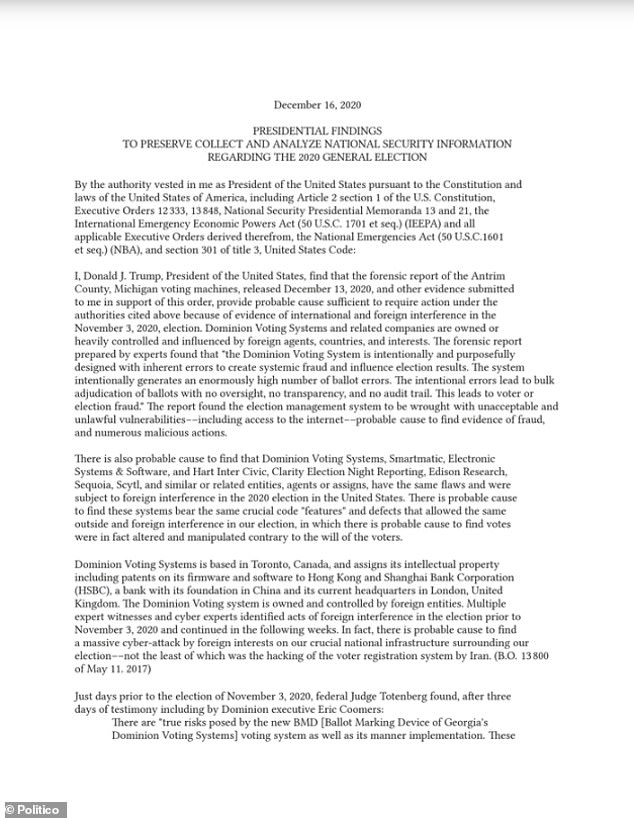 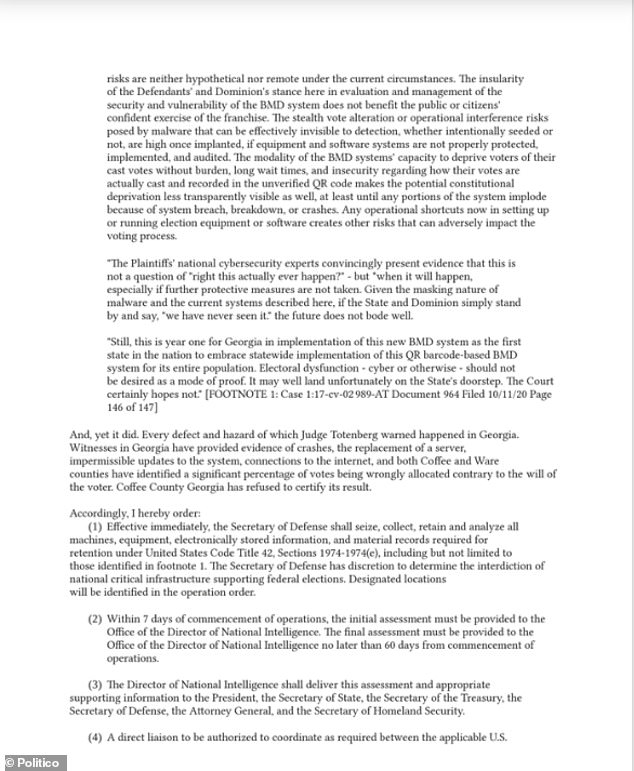 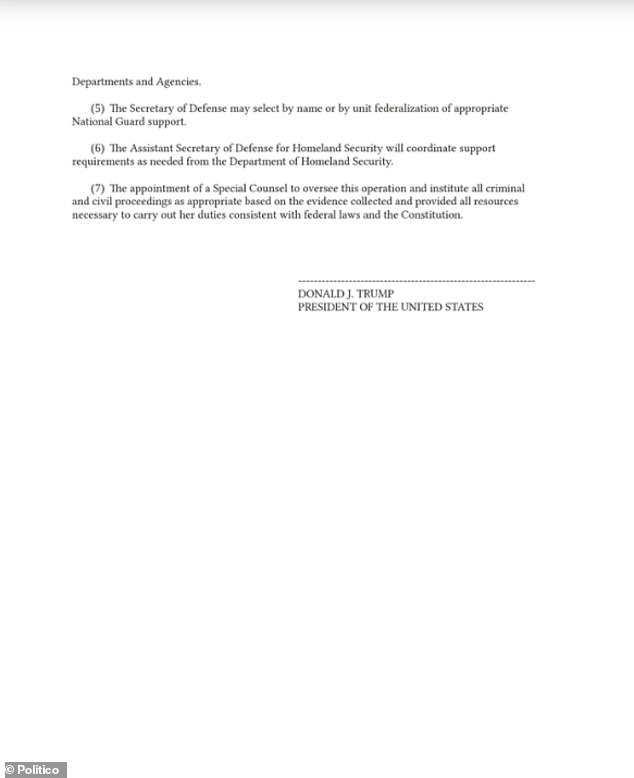 ‘The Secretary of Defense has discretion to determine the interdiction of national critical infrastructure supporting federal elections,’ it says. ‘Designated locations will be identified in the operation order.’

In one odd feature, the order would give the Defense Secretary 60 days to assess the election – a fact Politico writes suggests it could be part of an effort to keep Trump in power through at least mid-February 2021. Joe Biden’s inauguration was Jan. 20th.

The document claims Dominion Voting Systems – which has sued networks and Trump allies over their post-election claims – were ‘purposely’ designed with ‘inherent errors to create systemic fraud and influence election results.’

The company has strongly disputed the claim, and dozens of courts around the country threw out cases claiming widespread fraud. It said there was ‘probable cause’ to find ‘voters were in fact altered and manipulated contrary to the will of the voters,’ when there has been no such official finding.

Another document, labeled ‘Remarks on National Healing’ contains a speech Trump did not deliver, that is now in the possession of the committee, according to the report.

The words have Trump roundly condemning rioters as having ‘infiltrated’ the U.S. Capitol.

Trump in a series of comments since leaving office has referred ‘patriots’ who took part.

‘I would like to begin today by addressing the heinous attack that took place yesterday at the United States Capitol,’ it opens. ‘Like all Americans, I was outraged and sickened by the violence, lawlessness and mayhem. I immediately deployed the National Guard and federal law enforcement to secure the building and expel the intruders. America is, and must always be, a nation of law and order.’

The Demonstrators who infiltrated the Capitol have defiled the seat of American Democracy,’ the remarks state. ‘I am directing the Department of Justice to ensure all lawbreakers are prosecuted to the fullest extent’ of the law.’

Trump delivered similar language while reading from a tele-prompter after Jan. 6th.

Trump had told rioters in his taped remarks: ‘We love you. You’re very special. You’ve seen what happens, you see the way others are treated that are so bad and so evil. I know how you feel.’

The draft also has Trump declaring the election fight ‘over.’

‘But as for THIS election, Congress has now certified the results. The election fight is over. A new administration will be inaugurated on January 20th. My focus now turns to ensuring a smooth, orderly and seamless transition of power. This moment calls for healing and reconciliation.’

Trump would ultimately skip Joe Biden’s and has repeatedly said the election was illegitimate.