Donald Trump lashes out at China again for their virus cover-up, but does not suggest how he will punish Beijing for ‘unleashing’ coronavirus’

President Trump again lashed out at China on Monday, telling reporters the country ‘should be held responsible’ for unleashing coronavirus on the world, but he stopped short on detailing how he would punish Beijing.

‘And then China gave us a wonderful gift, it wasn’t pretty,’ Trump said. ‘It came out of China … spread to Europe, but also came here and the whole world was infected by this horrible thing that they unleashed one way or another.’

He called the fast spread of coronavirus around the globe ‘totally preventable.’ And blasted China for not allowing medical experts to come in and see what was happening in Wuhan, the city where the first outbreak took place. 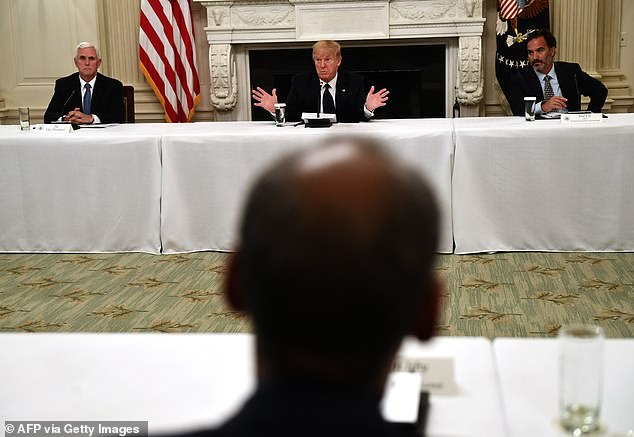 The president said China ‘should be held responsible’ for coronavirus spreading around the world, but wouldn’t give details on what a punishment would look like

Trump complained that people in Wuhan weren’t allowed to travel to other parts of China, yet they still allowed them to leave on international flights.

The president was referring to his policy in late January that barred non-U.S. citizens, except immediate familiy of U.S. citizens and permanent residents, from entering the United States if they had traveled to China within the last two weeks.

Since permanent residents and American citizens could return from China to the U.S., the ban didn’t fully stop the spread of coronavirus.

The president continued to lay into the World Health Organization, as well, again calling the organization too ‘China-centric.’

‘I think they’ve done a very said job in the last period of time,’ Trump said at one point.

‘They’re a puppet of China,’ he said shortly after.

He returned to the subject of the travel ban when remarking that the WHO hadn’t been supportive of the policy.

The WHO, in general, doesn’t support travel bans because of the economic disruption that can occur.

‘When I did the ban, they thought it was inappropriate to do,’ Trump said. ‘If i didn’t do the ban you would have lost hundreds of thousands of more people in this country.’

Trump charged that ‘sleepy Joe Biden came out and said I was xenophobic.’

In reality, the presumptive Democratic nominee referenced Trump’s ‘record of hysteria and xenophobia’ on the day Trump imposed the travel ban, but it was unclear if he was thought the policy was xenophobic.

As he continued to attack China, a female reporter asked the president how he specifically planned to hold China responsible for the coronavirus pandemic.

‘I’m not going to tell you that question, why would I tell you?’ Trump answered.

A male reporter jumped in and asked the question again.

He again neglected to give any additional details.