President Trump has posted a special video message to his Twitter supporters, reminding them that the Democrats are ‘trying to stop me because I’m fighting for you.’

The 40-second, produced video was posted on Trump’s twitter Saturday afternoon and shows Trump, wearing a blue suit, punctuating his words with his usual hand gestures, as he speaks to the camera.

‘What’s going on now is the single greatest scam in the history of American politics,’ Trump says.

On Saturday afternoon, President Trump posted  produced, 40-second video in which he told supporters that was ‘fighting for you’

‘We’re fighting to drain the swamp and that’s exactly what I’m doing and you see why we have to do it, because your country is at stake like never before. It’s all very simple. They’re trying to stop me because I’m fighting for you and I’ll never let that happen,’ Trump concludes.

It’s unclear when the video was filmed, although it appears to have been shot on the White House grounds.

About an hour after posting the campaign ad-like video, Trump posted a series of four tweets referencing impeachment and the whistlerblower report, as well as lashing out at Intelligence Committee Chairman Adam Schiff, calling for his resignation.

‘How do you impeach a President who has created the greatest Economy in the history of our Country, entirely rebuilt our Military into the most powerful it has ever been, Cut Record Taxes & Regulations, fixed the VA & gotten Choice for our Vets (after 45 years), & so much more?’ Trump tweeted early Saturday evening.

‘The conversation with the new and very good Ukraine President, who told the Fake News, at the United Nations, that HE WAS NOT PRESSURED BY ME IN ANY WAY, SHAPE, OR FORM, should by and of itself bring an end to the new and most recent Witch Hunt. Others ended in ashes!’ 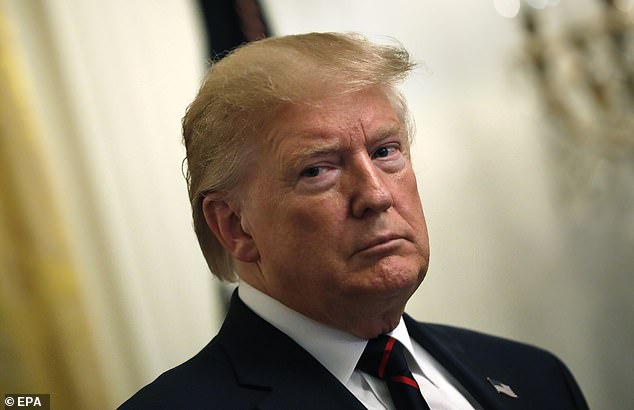 The series of four tweets that Trump posted early Saturday evening in which he questioned how it was possible for someone like him, who has accomplished so much, to be impeached

Trump went on to write, ‘The Whistleblower’s complaint is completely different and at odds from my actual conversation with the new President of Ukraine. The so-called “Whistleblower” knew practically NOTHING in that those ridiculous charges were far more dramatic & wrong, just like Liddle’ Adam Schiff fraudulently and illegally inserted his made up & twisted words into my call with the Ukrainian President to make it look like I did something very wrong. He then boldly read those words to Congress and millions of people, defaming & libeling me. He must resign from Congress!’

While Trump has tweeted and commented on several statements included in these tweets in the past, one new addition to his rota of sentiments was the reference to the fact that Ukraine President Volodymyr Zelensky told reporters Wednesday that ‘Nobody pushed me’ during the July call that became the impetus for the whistleblower’s complaint.

Zelensky, who was in a meeting with Trump at the time, said that ‘We had a great phone call’ and added that It was normal.’ 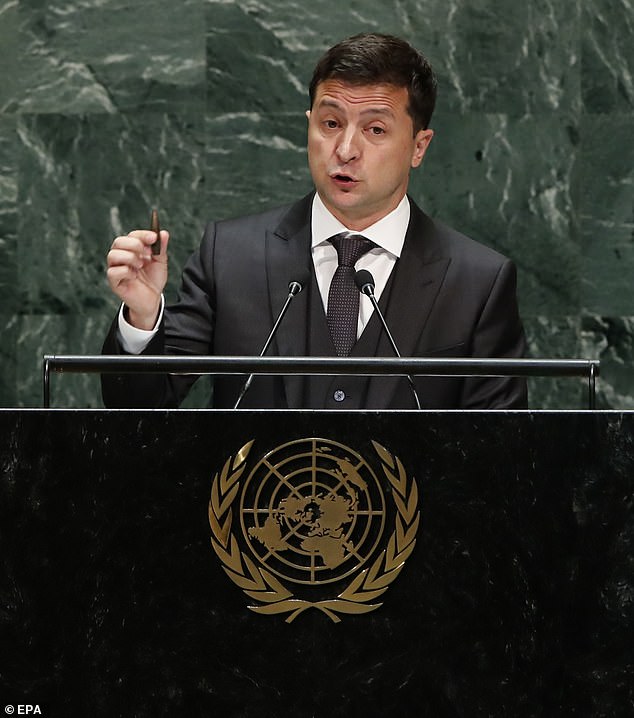 The tweets repeated sentiments he has previously shared, but included a new one stating that Ukraine President Volodymyr Zelensky confirmed that he was not pressured during the now infamous phone call the led to the whistleblower’s complain

These series of tweets followed a brief Saturday morning Twitter rampage, in which Trump berated top House Democrats leading the charge for impeachment, including Schiff and Judiciary Committee Chairman Jerrold Nadler, while also calling out freshman Rep. Alexandria Ocasio-Cortez and her ‘Squad.’

The tweets were sai to have been posted from the White House, prior to Trump’s departing for Trump National Golf Club in nearby Sterling, Virginia.

‘Can you imagine if these Do Nothing Democrat Savages, people like Nadler, Schiff, AOC Plus 3, and many more, had a Republican Party who would have done to Obama what the Do Nothings are doing to me. Oh well, maybe next time!’ the president wrote.

‘PRESIDENTIAL HARASSMENT!’ he added in a follow-up tweet, before tweeting his old catchphrase ‘MAKE AMERICA GREAT AGAIN’ and his new one, ‘KEEP AMERICA GREAT!’

Trump is remaining in Washington DC for the weekend with no public events scheduled.

On Saturday morning, he was spotted leaving the White House in a white polo shirt and red hat, in the company of Republican Senator Lindsey Graham — a staunch supporter who was recently overheard blasting impeachment efforts in a phone call on a JetBlue flight.

At the White House, a senior administration official confirmed Friday a key detail from the unidentified CIA whistleblower who has accused Trump of abusing the power of his office by asking the Ukrainian president to investigate allegations that Joe Biden quashed an investigation into a company his son sat on the board of.

The White House acknowledged that a record of the Trump phone call that is now at the center of the impeachment inquiry had been sealed away in a highly classified system at the direction of Trump’s National Security Council lawyers.

Trump, for his part, insisted anew that his actions and words have been ‘perfect’ and the whistleblower’s complaint might well be the work of ‘a partisan operative.’

Separately, Trump adviser Kellyanne Conway told reporters that the whistleblower ‘has protection under the law,’ something Trump himself had appeared to question earlier in the day. He suggested then that his accuser ‘isn’t a whistleblower at all.’

Trump’s comment questioning the whistleblower’s status seemed to foreshadow a possible effort to argue that legal protection laws don’t apply to the person, opening a new front in the president’s defense, but Conway’s statement seemed to make that less likely.

Still at issue is why the rough transcript of Trump’s July 25 phone call with Ukraine’s president was put on ‘lock down,’ in the words of the whistleblower.

The CIA whistleblower said that diverting the record in an unusual way was evidence that ‘White House officials understood the gravity of what had transpired’ in the conversation. 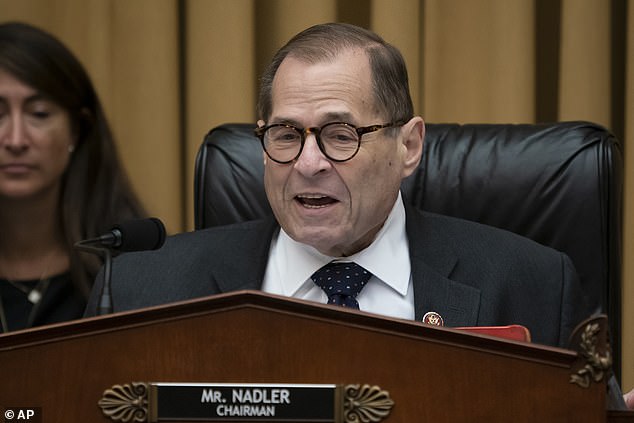 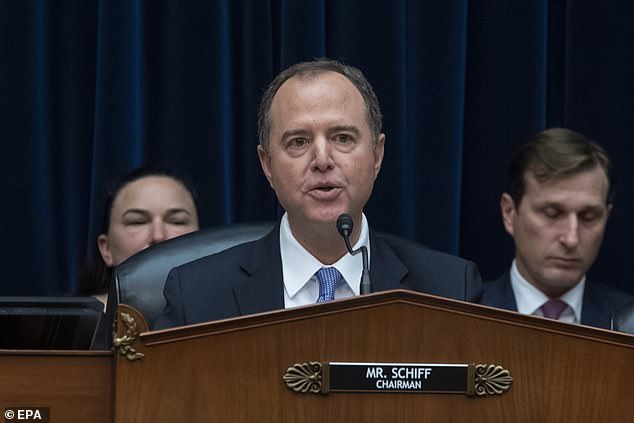 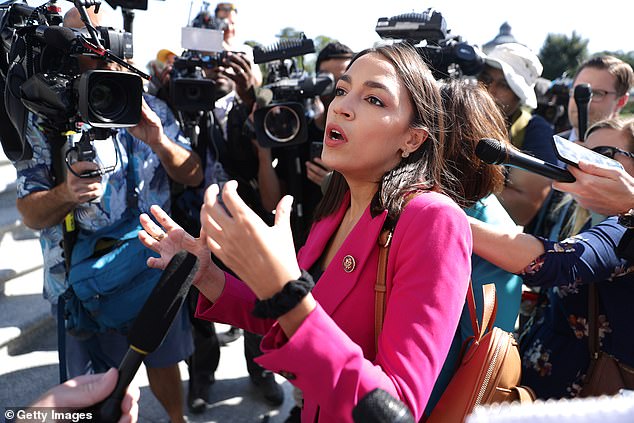 Rep. Alexandria Ocasio-Cortez (D-NY) talks to reporters before heading into the U.S. Capitol Building for final votes before a two-week state work period on Friday

One former official said memos of Trump calls with foreign leaders had to be severely restricted after leaks in 2017.

Calls with Saudi Arabia’s Crown Prince Mohammed bin Salman and Russia’s Vladimir Putin were among those whose distribution were kept to a minimum.

The official cautioned that administrations discuss sensitive matters with both nations, and that the treatment shouldn’t imply anything untoward on the call. Even some calls with US allies are also restricted due to discussions of classified topics. The person spoke on the condition of anonymity to describe the process.

The whistleblower complaint alleges that Trump used his office to ‘solicit interference from a foreign country’ to help himself in next year’s U.S. election.

In the phone call, days after ordering a freeze to some military assistance for Ukraine, Trump prodded new Ukrainian President Volodymyr Zelenskiy to dig for potentially damaging material on Democratic rival Joe Biden and volunteered the assistance of both his personal attorney, Rudy Giuliani, and U.S. Attorney General William Barr.

Speaker Nancy Pelosi refused to set a deadline for the probe but promised to act ‘expeditiously.’ The House intelligence committee could draw members back to Washington next week.

Pelosi said she was praying for the president, adding, ‘I would say to Democrats and Republicans: We have to put country before party.’