President Trump turned his attention back to the World Economic Forum tweeting about making ‘great progress’ in Davos, after retweeting messages from his Republican Senate allies overnight.

‘Making great progress in @Davos,’ he tweeted. ‘Tremendous numbers of companies will be coming, or returning, to the USA. Hottest Economy! JOBS, JOBS, JOBS!’ the president wrote.

He only had words of praise on how the trial was going as he arrived at the conference Wednesday morning. ‘Good, great, really good,’ he responded to reporters’ impeachment-related queries as he walked in. ‘We are doing a very good job, we have a great case,’ he also answered, according to the White Hosue pool.

The sun was rising over the Swiss mountain town as the Senate was taking its final impeachment vote – whether to approve Senate Majority Leader Mitch McConnell’s resolution that lays out the rules of the trial.

President Trump will head back to the Congress Centre at the World Economic Forum in Davos, Switzerland for meetings Wednesday before heading back to the United States 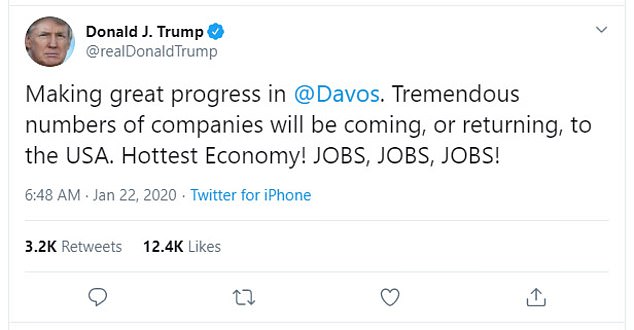 President Trump turned his attention back to the World Economic Forum, where he’ll hold several meetings Wednesday morning, after retweeting his Senate allies during the first day of his impeachment trial overnight 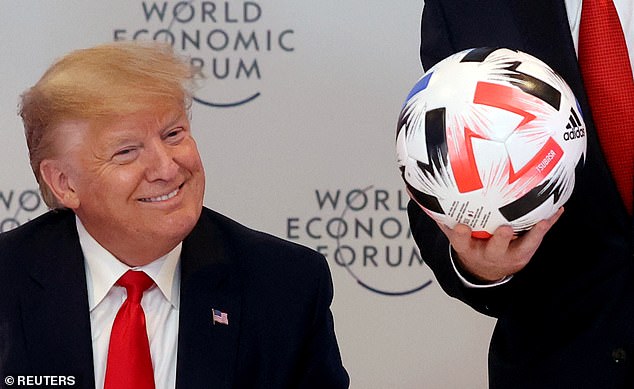 President Trump (left) smiles as FIFA President Gianni Infantino (right) brings him a soccer ball at a Davos dinner Tuesday night. Trump is spending half a day Wednesday back at the conference in meetings

The president had spent the night retweeting some of his Republican Senate allies.

‘There will be a time and place to vote on whether to allow witnesses. Right now it’s clear that @RepAdamSchiff & his gang are too scared to start their oral arguments,’ said Sen. Rick Scott of Florida, commenting on the series of amendments the Democrats proposed that kept the Senate in session into the early morning hours.

‘It is amazing to watch Adam Schiff practically shove his co-managers aside to get to the microphone. His plan seems to be to keep delaying the ACTUAL TRIAL just to hear himself talk,’ remarked Sen. Josh Hawley, a Missouri Republican, in another tweet the president shared. 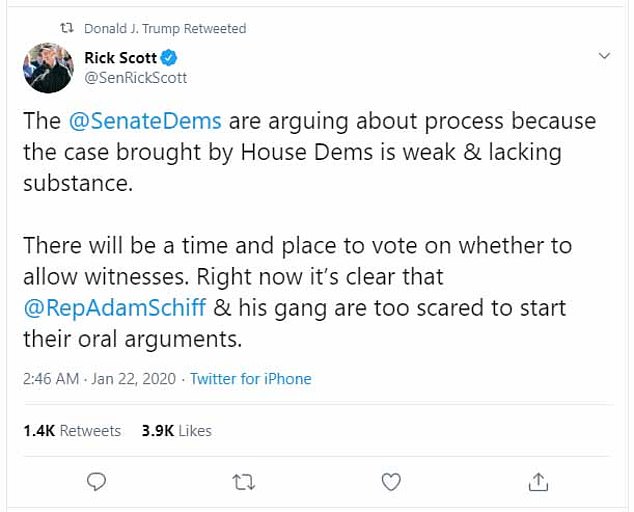 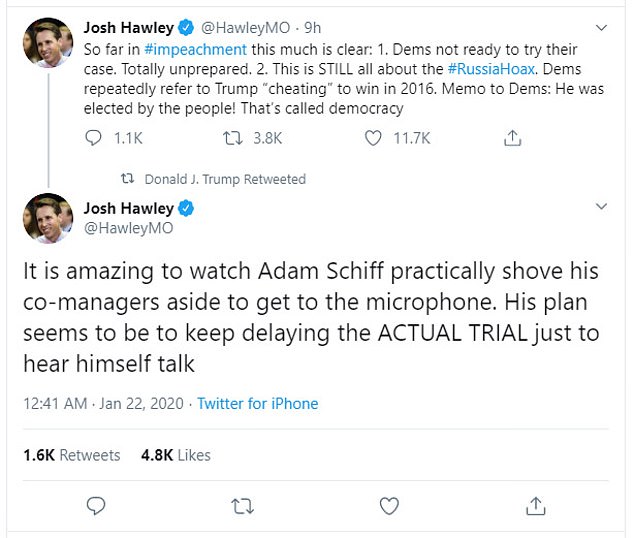 Overnight, President Trump retweeted messages from his allies in the Senate. As the Senate finally gaveled out the sun was rising over Davos, Switzerland, where Trump will spend a half-day in meetings Wednesday

After the president shared the senators’ tweets, his attention turned back to Davos, as he touted the American economy. He was due at a breakfast meeting in two hours.

Trump will spend just the morning in Switzerland before taking back off for the states.

He’ll have a breakfast meeting with American CEOs and business leaders.

The first, with Iraqi Kurdistan Region President Nechirvan Barzani, will not be open to press.

The second is with Iraqi President Barham Salih.

Trump’s meeting with Salih comes as the U.S.’s relationship with Iraq is on the rocks.

The Iraqis were not pleased – with the parliament voting to oust U.S. troops from the country – that Trump decided to use their country as a staging ground for a drone strike on Iranian general Qassem Soleimani.

The killing of Soleimani brought the U.S. and Iran to the brink of war.

Trump responded to the Iraqis threat to toss out U.S. troops by saying he would sanction the country, which the U.S. has been engaged with militarily since 2003.

The president will then take Air Force One back across the Atlantic as day No. 2 of the Senate impeachment trial gets underway. 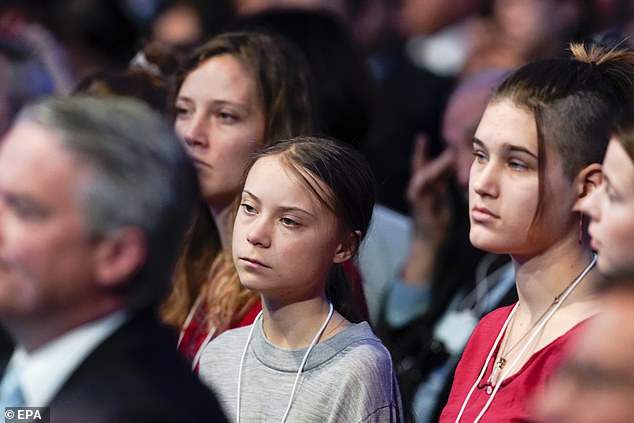 Trump spent his first day at Davos throwing shade at teen environmental activist Greta Thunberg, whose double appearances the same day as the president’s speech were the confernce’s most buzzed about.

During an interview on-site with the Wall Street Journal, Trump first downplayed the activist’s impact.

‘I don’t really know anything about her,’ Trump told the newspaper before adding, ‘she’s vey angry.’

Trump dedicated a whole section of his Tuesday address to slapping down climate change warnings.

‘This is not a time for pessimism. This is a time for optimism,’ Trump said.

The president advised that to ’embrace the possibilities of tomorrow we must reject the perennial prophets of doom and their predictions of the apocalypse.’

‘They are the heirs of yesterday’s fortune tellers,’ Trump stated. ‘They predicted an over-population crisis in the 1960s, mass starvation in the 70s, and an end of oil in the 1990s.’

‘These alarmists always demand the same thing – absolute power to dominate, transform and control every aspect of our lives,’ Trump said. ‘We will never let radical socialists destroy our economy, wreck our country or eradicate our liberty.’