President Trump’s favorite pollster Scott Rasmussen has him 12 points behind Democrat Joe Biden in a new poll, which also shows Trump in a precarious place with suburban, male and white voters – who helped the president win in 2016.

The poll comes the same day the Biden campaign announced an impressive $81 million fundraising haul in May.

Rasmussen’s survey with Just The News found that 48 per cent of registered voters nationally liked Biden, while just 36 per cent said they’d support Trump in the November general election.

President Trump, photographed at the White House Monday, has fallen behind Democrat Joe Biden by 12 points in a new national survey conducted by pollster Scott Rasmussen, which also shows him struggling with suburban voters and men 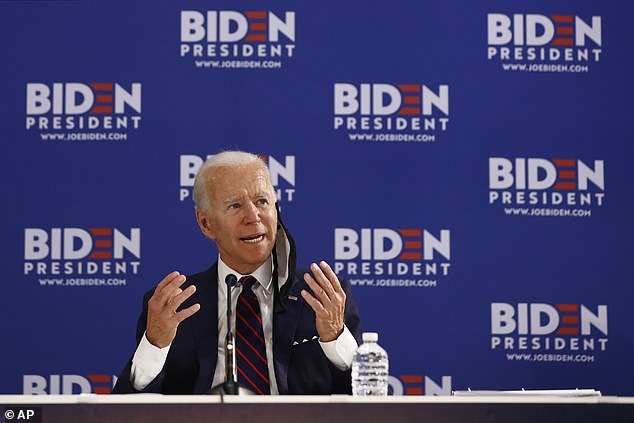 Joe Biden does well with groups commonly associated with the Democratic coalition: women, black and Hispanic voters, young people – but Biden’s also winning men, is even with Trump with white voters and is only a few points behind him in voters older than 65

Biden leads among some of the traditional Democratic groups.

He wins black voters 71 per cent to 8 per cent.

He wins Latino voters 57 per cent to Trump’s 21 per cent.

Fifty-one percent of voters under the age of 24 choose Biden, compared to 15 per cent who said they’ve vote for Trump.

But on the flip side, Trump does not have a commanding lead over demographics who usually favor Republican presidential candidates.

Men actually prefer Biden. The Democrat earns 47 per cent of the male vote, while Trump gets 38 per cent.

White voters, too, are split fairly evenly – 44 per cent Trump and 43 per cent like Biden.

The only age category Trump wins are voters over age 65, and he only has a three point lead over Biden 49 per cent to 46 per cent.

And while Trump has an edge with rural voters, Biden crushes him in the suburbs – which often decide how swing states swing.

Fifty per cent of suburban registered voters told the pollster they planned to vote for Biden, while 36 per cent said they’d vote for Trump.

While national polls can detect widespread sentiment about the direction of the race, polling in swing states gives a more accurate reflection of the lay of the land.