OKLAHOMA CITY (AP) – A Tulsa mortgage company owner won the GOP nomination in the race to become Oklahoma’s next governor, setting up a November contest in which education will undoubtedly be a top issue.

“Let’s celebrate this victory tonight, because tomorrow we get back to work,” Stitt told cheering supporters at a watch party at his company headquarters.

In this Friday, Aug. 24, 2018, photo Republican gubernatorial candidate Kevin Stitt, right, speaks during a candidate forum in Oklahoma City. At left is Republican candidate Mick Cornett, who Stitt will face in a runoff Tuesday, Aug. 28. At center is Democratic candidate Drew Edmondson, who will face the winner in November. (AP Photo/Sue Ogrocki)

Republicans running for statewide office in Oklahoma have enjoyed dominating success at the ballot box in the last decade, but Democrats are pinning their hopes on Edmondson, a 71-year-old Vietnam veteran. Edmondson hopes to tap into voter frustration with the GOP Legislature exacerbated by this spring’s statewide teacher walkout and an anti-Trump sentiment that has energized Democratic voters. Edmondson met frequently with some of the tens of thousands of teachers who thronged the Capitol during the two-week walkout and talks on the stump about his experience as a young high school teacher in his hometown of Muskogee.

In mailers and television ads, Stitt hammered Cornett for not being supportive enough of Trump or his immigration policies.

In a televised debate last week, Cornett shot back, criticizing Stitt as a Johnny-come-lately to Oklahoma’s Republican political scene.

“Where have you been over the last 14 years?” Cornett said during the debate on Oklahoma City’s KOCO-TV. “You haven’t been on the front lines fighting for conservative principles.”

Stitt, though, fully embraced his standing as a businessman and political outsider.

“I’ve been in the private sector, in the real world creating jobs,” Stitt responded. “I haven’t been cashing a government check.”

Republican candidates who try to align themselves more closely with Trump have seen success in a number of other states, including neighboring Kansas, said GOP political consultant Trebor Worthen.

“The Republican Party is President Trump’s party, and any politician that you see across the country who has not been adequately supportive of President Trump has paid a price for that,” Worthen said.

Phil Workman, a 66-year-old retiree from Norman, said he liked the fact that Stitt was a political newcomer.

“One thing that led me to Stitt was that he’s out of the norm for politics in that he’s not an insider, he’s an outsider,” Workman said.

Stitt and Cornett’s performance in the 10-candidate field in the primary broke along geographical lines, with Cornett winning big in Oklahoma City and central Oklahoma, and Stitt taking counties in Tulsa and eastern Oklahoma. Lt. Gov. Todd Lamb, who finished a close third in the race and performed well in many rural counties, didn’t endorse either candidate.

Both men touted their opposition to abortion and support of Trump, but differed on their support of a tax increase this year narrowly approved by the Legislature to help pay for the first teacher pay hike in a decade. Cornett said he supported Fallin’s signing of the bill, while Stitt has said he wouldn’t have signed it.

Sign up for “Politics in Focus,” a weekly newsletter showcasing the AP’s best political reporting from around the country leading up to the midterm elections: https://bit.ly/2ICEr3D 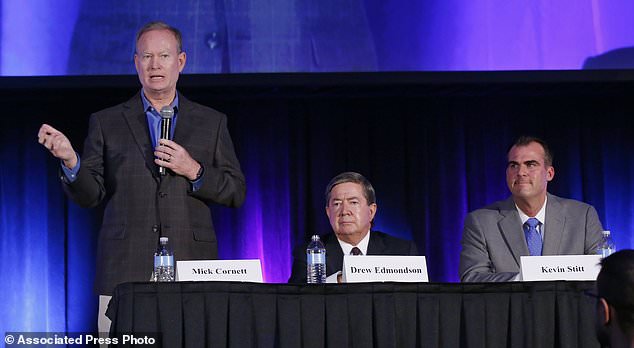 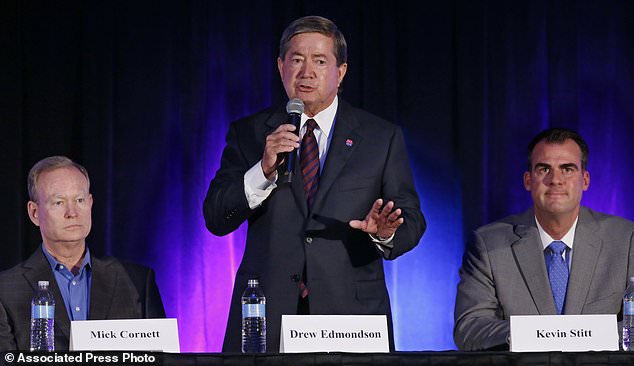 In this Friday, Aug. 24, 2018, photo Oklahoma Democratic gubernatorial candidate Drew Edmondson gestures as he speaks during a candidate forum in Oklahoma City. Looking on are Republican candidates Mick Cornett, left, and Kevin Stitt, right. Cornett and Stitt face each other in the Republican primary runoff election on Aug. 28. Edmondson will face the winner in November. (AP Photo/Sue Ogrocki)