Twin saved by liver transplant, but it was too late for his brother

Twin brothers who were best friends have been separated forever just months after both were diagnosed with the same liver disease – but only one could be saved by a transplant.

Devin and Nick Coats, 18, of Slidell, Louisiana, were diagnosed with stage 4 cirrhosis of the liver in March 2017 after Nick started experiencing burning sensations in his hamstrings that were so painful he could hardly sit in his school desk.

Their mother Margi wasn’t too concerned about his symptoms, brushing them off as growing pains since both of her sons were ‘growing inches like crazy.’

When the pain persisted she took her son to the emergency room, where blood tests revealed he had a low number of platelets, a blood component that helps wounds heal and prevent bleeding by forming clots.

The doctor recommended that Devin get checked out to since they were twins; they were eventually diagnosed with cirrhosis of the liver – chronic organ damage that causes scarring and even liver failure.

The diagnosis became even more heartbreaking months later when Nick developed an aggressive liver cancer in August, which would prevent him from being able to receive a new liver.

Devin received a transplant in January, but despite every effort to fight his disease, Nick died Monday night succumbing to liver cancer.

Margi is urging people to sign up for organ donation as she believes her son would still be alive if he had received a liver transplant within the five months before his cancer was spotted. 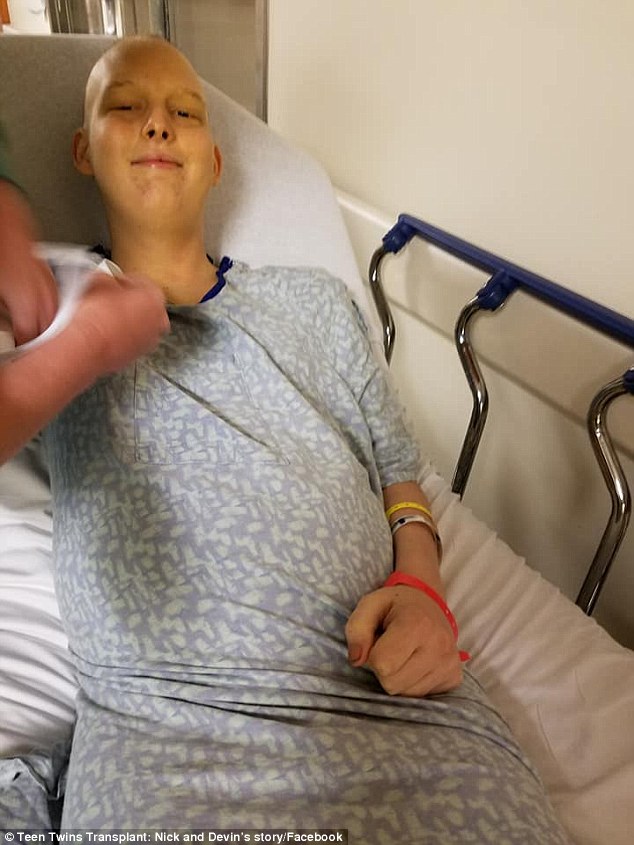 While waiting for an organ donor, Nick (pictured on February 21) was diagnosed with an aggressive form of liver cancer in August 2017

‘When [Nick] got diagnosed with liver cirrhosis, at that time, if we had enough organs available across this country, none of this would have been an issue,’ Margi told ABC News. ‘Nicholas would not have developed cancer on his diseased liver.’

Cirrhosis of the liver, a condition where the organ slowly deteriorates and is unable to function properly due to chronic or long lasting injury, kills about 31,000 people in the US each year, according to experts at Johns Hopkins University.

Many people develop this issue by abusing alcohol or contracting hepatitis C. However, Nick and Devin’s cirrhosis is believed to be caused by a mutated gene found in their DNA, according to their family’s GoFundMe page.

When Nick began having leg pains last year, Margi wasn’t concerned until she took him the emergency room and the doctor referred her to a Hema-Oncologist, a doctor who specializes in diagnosis blood disease and cancer.

The doctor also recommended that Devin get checked out.

Margi then took her sons to a pediatrician who found that they both had a low platelet count.

After numerous trips to the different specialists, Nick and Devin were scheduled for an ultrasound which revealed that their livers were abnormal and had nodular growths on it.

The image also revealed that their spleens had grown twice their size to compensate for the lack of liver function.

After the scans, doctors performed biopsies on Nick and Devin which revealed they had severe scar tissue on their livers and diagnosed them with cirrhosis.

‘It has been brought to mind that this has been occurring for a long period of time because it takes a long time for the liver to get scarred, but this was something that we didn’t even know was happening,’ Margi wrote on the twin’s GoFundMe page.

‘All of this was brought about just by Nick having blood work done due to the burning in his hamstrings. Something that could have been totally unrelated,’ she added.

Nick and Devin became eligible for the donor registry.

Margi and the twins’ older sister Heather were still optimistic that they would find a transplant for the twins.

But things got worse in August when Nick came home from his part-time job at Sonic bent over in excruciating pain.

Margi took him to the emergency room where doctors did a CAT scan and blood work, eased his pain, and transferred him to his liver doctors so they can follow up on his care.

He remained in the hospital for one week while doctors tried to figure out what was causing his pain.

They ordered an ultrasound and MRI scan which revealed there were lesions as big as 10 centimeters on his liver.

Doctors ordered another liver biopsy which revealed Nick had an aggressive, rare and incurable disease called angiosarcoma, cancer of the inner lining of the blood vessels.

‘So many questions were rushing through my mind and I didn’t know the severity of what he had, but all I knew is that my son, a healthy young twin boy, is now battling cancer on top of cirrhosis of the liver,’ Margi wrote. 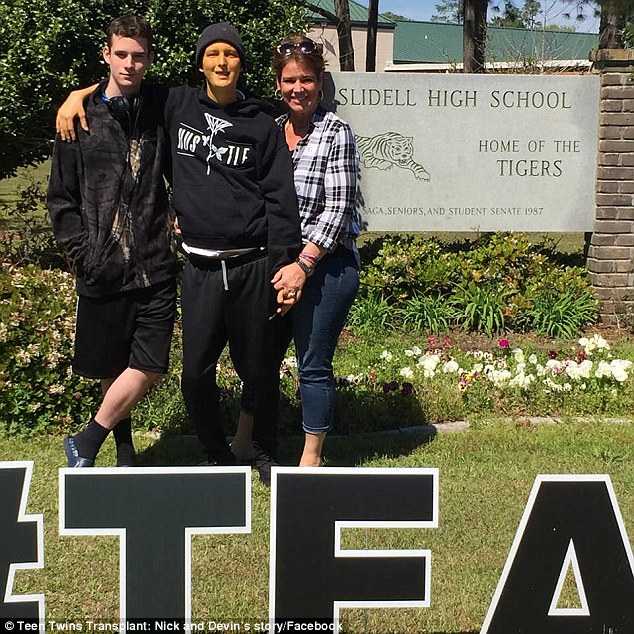 Tragic: Nick (center) underwent chemotherapy for his aggressive cancer, while his brother Devin (left) became eligible for an organ donation 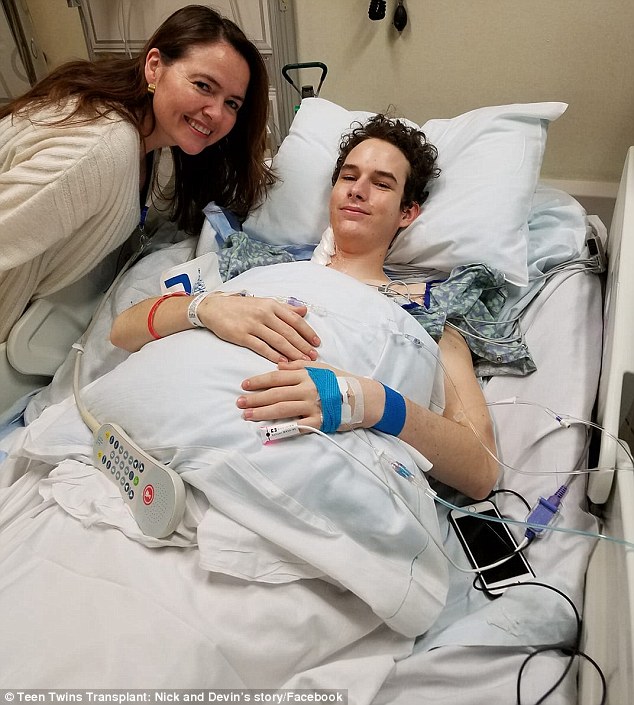 Devin (pictured), who received a liver transplant in January, felt guilty about watching his brother deteriorate

Doctors immediately started him on chemotherapy.

Meanwhile, an organ became available for Devin and he received the transplant in January.

Nick, who was undergoing chemotherapy, did not receive a transplant.

Although it’s not clear why Nick didn’t receive a liver transplant, experts at Swedish Medical Center in Washington said donor patients must be healthy enough to withstand a complex and risky surgery and chemotherapy weakens the immune system.

Factors like obesity, prior abdominal surgery, or general physical weakness can exclude a person from the organ donor waiting list, they said.

‘When they called Devin in to have his liver transplant (in January), he didn’t want to have it done. He wanted his brother to go in for him,’ Margi told ABC News.

After receiving the transplant, Devin received a second chance at life, but he felt guilty that his brother Nick didn’t get this chance.

‘[He’s] having a new lease on life and feeling good about that… but also fighting the guilt he has because he’s going to survive and he’s watch[ed] his brother here in the same house slowly fade away,’ said Margi, who said the twins were best friends.

On March 20, Margi announced on a Facebook page dedicated to the twins that Nick died Monday night.

‘My baby Nick fought hard to have a new chance at life. He was strong,’ she wrote. ‘He was courageous. Nick was my protector and he loved his family. Nick showed others his genuine heart and was a good friend to man.’

Margi is sharing Nick and Devin’s story to help raise awareness about the need for organ donors.

‘This is ridiculous,’ she told ABC News. ‘There [are] way too many people in this country for us to have a shortage of organs. When you go in the ground, you’re in the ground. Extend your loved one’s life in somebody else.’