Jaw-dropping footage shows two huge ships colliding with each other at a busy port causing shipping containers to plummet into the water.

The cargo ship collision was caught on tape and shows a huge vessel scraping against an anchored vessel, sending the huge containers crashing into the sea.

The shocking video was taken at Karachi port in Pakistan and shows German-based shipping transportation company Hapag-Lloyd’s ship pulling out of the port and colliding with a ship which is docked by its side.

It’s not clear what caused the two ships to collide but according to reports, twenty one shipping containers fell into the ocean as port workers watch the scene unfold.

Reports also said that only the multiple shipping containers that were ‘full of imported cars’ and other freight were damaged. There is no damage to the terminal’s cranes.

The port of Karachi is one of South Asia’s largest and busiest deep-water seaports and handles about 60% of the nation’s cargo. 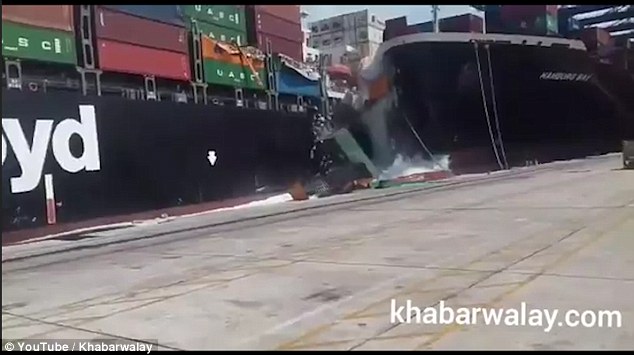 The large shipping containers, which reportedly were carrying imported cars, crashed into the Arabian sea

Some containers float on the surface as the German container ship pulls out in front. The terminal has suspended operations while Karachi Port Trust removes containers from the water 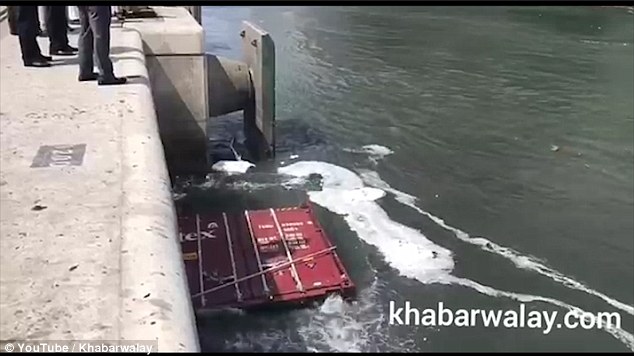 The end of the footage shows a large, heavy container slowly sink into the sea. It is not clear what caused the two ships to collide

The clip ends as the workers film one of the heavy containers slowly sinking into the Arabian sea.

The Karachi Port Trust has ordered investigations into the collision between two container ships that took placeyesterday.

The terminal has suspended operations while a special operation to pull out the fallen containers from the sea is underway with the help of Pakistan Navy.