Social distancing of the entire US population, isolation of anyone infected with coronavirus and quarantines for their household members may be the only way to stem the pandemic – and these measures may need to be in place for 18 months, a new study suggests.

Researchers at Imperial College London say that if the whole population doesn’t hunker down, between 1.1 million and 1.2 million Americans will likely die of coronavirus, even if they are treated.

Their study, published Monday, predicts how the coronavirus pandemic is likely pan out, depending on how the US and UK respond.

If the US and UK did nothing, they estimate that 81 percent of each population would become infected, and 2.2 million Americans would die, along with 510,000 Britons.

But keeping people away from each other could cut US deaths down to some 200,000, Mother Jones estimated. So far, more than 100 Americans have died since the coronavirus emerged in China in December.

The study’s alarming findings underscore just how imperative following new US guidelines to stay out of bars and restaurants and not gather in groups of more than 10 for the next two weeks (at least) are to saving millions of lives.

The Trump administration’s new guidelines – which followed a temporary moratorium on visits to nursing and retirement home facilities – were issued only for 15 days after their Monday announcement, but the Imperial College study suggests far longer efforts may be needed.

If the US  and UK were to do nothing to stop the spread of coronavirus, the number of people in need of ICU beds will quickly outpace the health care systems’ capacities. But limiting social contact could drastically flatten the pandemic’s curve, Imperial College of London found

Even Trump himself drastically changed his tone and told Americans the pandemic may last in the US until July or August.

According to their assessment, Imperial College experts believe social contact may well need to be minimized until a vaccine is widely available – up to 18 months from now.

They examined the impact of two strategies – mitigation and suppression – on the spread of the virus. They also analyzed the effects of different levels of suppression tactics on the same.

In short: mitigation is not enough, and any country that can should practice suppression.

The main distinction between the two tactics is who should be practicing them. 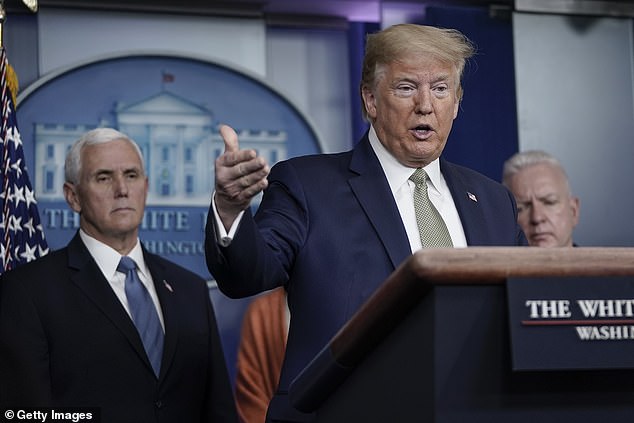 This week, President Trump announced new guidelines for keeping Americans apart in an effort to stem the spread of the virus in the US 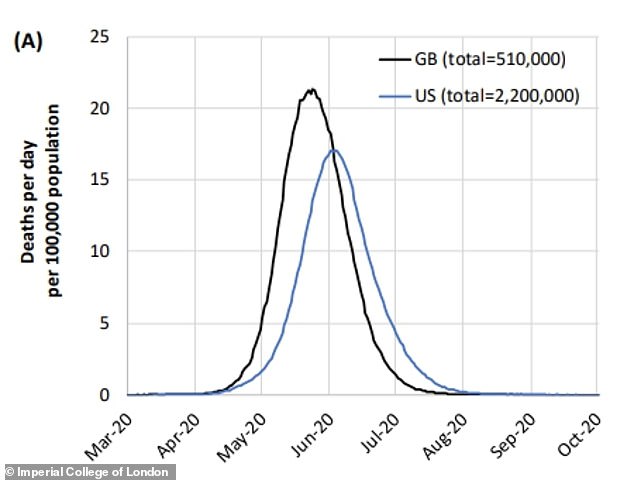 If nothing were done, US deaths (blue) could surge to 2.2 million, and deaths in the UK could surpass 500,000 – an even greater proportion of its population

Mitigation policies would mean ‘combining home isolation for suspect cases, home quarantine of those living in the same household as suspect case and social distancing of the elderly and others at most risk of the disease,’ the study authors wrote.

To be sure, this would help, cutting the number of deaths by about half and alleviating two-thirds of the strain on health care systems.

But under those conditions, hundreds of thousands of people in the US and UK alike would likely die in the pandemic, and ICU beds would be ‘overwhelmed by many time over.

If ‘suppression’ sounds rather Draconian, that’s because it requires measures that are rather strict.

They’re the kinds of restrictions on movement already being suggested – although not mandated – in the US: Closing down businesses venues that are social in nature, such as movie theaters, bars and restaurants and generally keeping people apart.

Fueling all of these measures is a goal of a transmission rate below one, meaning that each infected person passes coronavirus on to less than one other person on average. 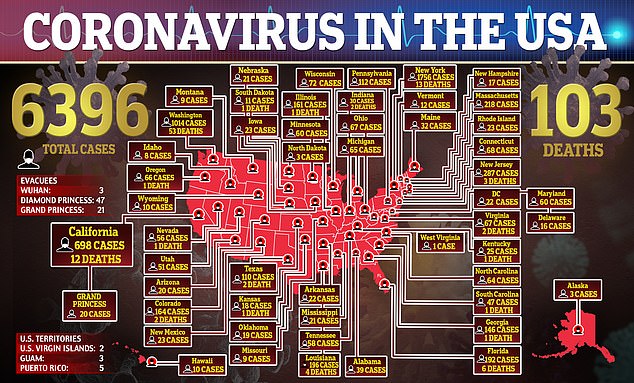 More than 6,000 Americans have caught coronavirus so far and 103 people have died

Although school closures (green) could drastically reduce the spread of the virus now, a new epidemic peak in people needing ICU beds would likely come later this year

And that requires the whole population, not just those at risk, to keep their distances from one another.

‘Combining all four interventions (social distancing of the entire population, case isolation, household quarantine and school and university closures) is predicted to have the largest impact, short of a complete lockdown which additionally prevents people from going to work’ the study authors wrote.

Unsurprisingly, the earlier these measures are enacted, the better. The study authors estimated that if they were put into effect at the earliest point analyzed – when 60 new weekly cases were diagnosed and each person was transmitting to an average of two others – then deaths over a two year period might be limited to as few as 5,600.

Estimates weren’t given for the US, but given that the comparable worst case for the US is about four times as many deaths as that in the UK, one could estimate that the best case scenario for the US would have been about 22,400 deaths.

Unfortunately, we’ve already far surpassed the threshold of new weekly cases for to reach that goal.

Instead, implementing far more restrictions on movement than we have until a vaccine is ready could reduce deaths to somewhere around 220,000, estimated Mother Jones.

If the US sticks only to mitigation strategies – those that apply to high risk people, and not the general population – the healthcare system, which is already scrambling to acquire tests, ventilators, and more workers, will certainly be overwhelmed, by at least 8-fold surge capacity, the study authors write.

‘We therefore conclude that epidemic suppression is the only viable strategy at the current time.’

In other words: Stay home, stay safe, and follow the US guidelines.

FOR ANYONE WITH SIGNS OF OR AT-RISK FOR CORONAVIRUS

IF YOU FEEL SICK

Stay home. Do not go to work. Contact your medical provider.

IF YOUR CHILDREN ARE SICK

Keep them at home. Do not send them to school. Contact your medical provider.

IF SOMEONE IN YOUR HOUSEHOLD HAS TESTED POSITIVE

IF YOU ARE AN OLDER PERSON

Stay home and away from other people.

IF YOU ARE A PERSON WITH A SERIOUS UNDERLYING CONDITION

[If it] can put you at increased risk (for example a condition that impairs your lung or heart function or weakens your immune system) stay home and away from other people.

HOW EVERYONE CAN HELP SLOW THE SPREAD OF THE CORONAVIRUS

IF YOU WORK IN A CRITICAL INFRASTRUCTURE INDUSTRY

[According to the Department of Homeland Security, these include] healthcare services and pharmaceutical and food supply [and] you have a special responsibility to maintain your normal work schedule. You and your employers should follow CDC guidance to protect your health at work.

In groups more than 10 people.

USE DRIVE-THROUGH, PICKUP, OR DELIVERY OPTIONS

Avoid eating and drinking at bars, restaurants and food courts.

[Do not go on] shopping trips and social visits.

DO NOT VISIT NURSING HOMES

[Also stay away from] retirement or long-term care facilities unless to provide critical assistance.