A girl from Scotland has become the world’s youngest patient of ground-breaking brain surgery at the age of two and a half years old.

She was diagnosed with dystonia shortly before her operation, a condition would send her body into uncontrollable shaking and spasms.

Her parents, Patrycja Majewska and Martinas Kaftanikaite, said they felt helpless trying to care for their daughter, who struggled to eat and breathe.

Doctors said they operated on Viktoria in order to save her life because, in a very small number of cases, dystonia can be fatal.

They were extremely cautious but everything ‘worked like clockwork’, offering promise for future patients with movement disorders.

After the four-hour operation at Evelina Hospital in London in May, Viktoria is recovering in intensive care in her home city, Glasgow.

Viktoria Kaftanikaite has become the youngest person in the world to receive ground-breaking brain surgery at the age of two and a half years old. Pictured with her mother after 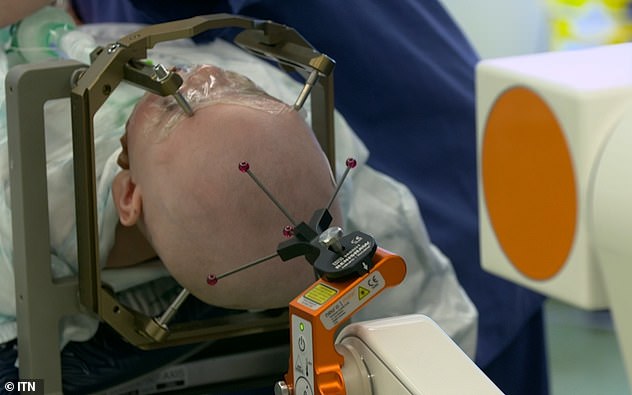 Viktoria was the youngest patient to have deep brain stimulation (DBS), which sends electrical impulses through the brain to fix abnormal communication. Pictured, during surgery 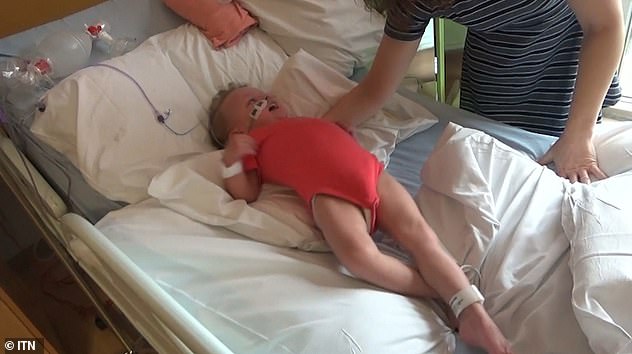 Viktoria’s muscles would go into extreme spasm, leaving her screaming in unbearable pain. She was in intensive care for five months at The Royal Children for Hospital, Glasgow (pictured) while doctors tried to figure out why

According to the Dystonia Society, DBS can cause a reduction in symptoms by up to 80 per cent. However, one in five patients don’t get much relief.

Ideally, DBS should be offered to children as early as possible, because the effects wear off the longer a patient lives with dystonia.

But before Viktoria, the youngest person to receive DBS was a three-year-old boy, as surgeons have gradually been using the treatment for young people with caution.

Dr Jean-Pierre Lin, the consultant paediatric neurologist who coordinated Viktoria’s treatment, told The Guardian that operating on Viktoria had ‘broken the sound barrier’ for age limitations.

Dystonia is estimated to affect 70,000 people in the UK of varying ages, according to The Dystonia Society, and can be caused by other conditions such as cerebral palsy or a stroke.

It took two years before Viktoria’s dystonia was diagnosed, and medics found it was caused by a rare mutation in the GNA01 gene.

The most severe form of dystonia has a 10 per cent death rate, and Dr Lin said Viktoria would have died without the surgery.

Viktoria’s arms, legs, eyes and mouth would constantly twitch, which stopped her from eating and also affected her ability to breathe by herself.

Her muscles would go into extreme spasm, leaving her screaming in unbearable pain. 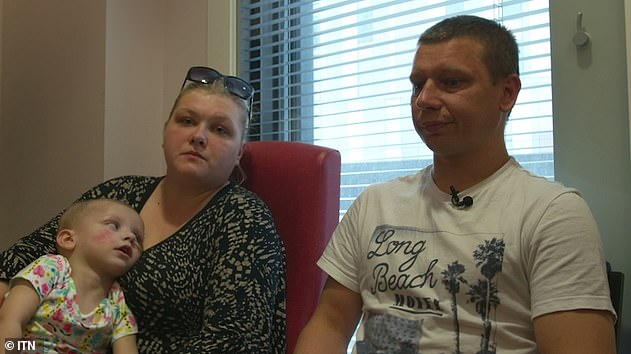 Viktoria’s parents, Patrycja Majewska and Martinas Kaftanikaite, said they felt helpless trying to care for their daughter. Pictured after the surgery 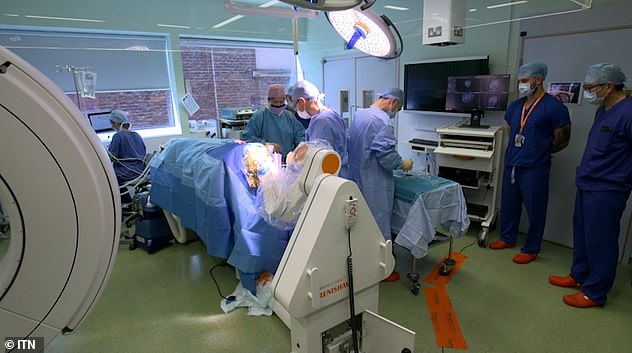 Doctors said they operated on Viktoria in order to save her life. She struggled to eat or breathe unassisted due to her constant mouth twitches and flailing arms 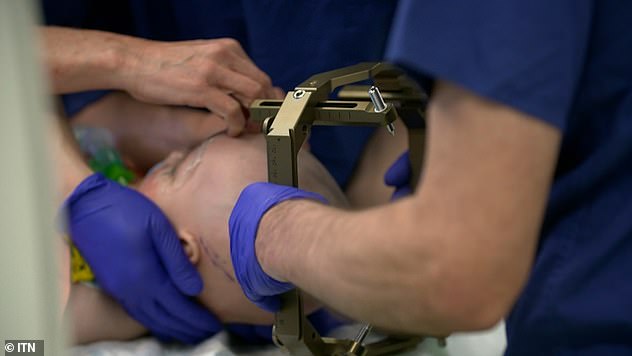 DBS involves implanting very fine wires with electrodes at their tips into the brain by drilling two 5p piece holes into the top of the skull. Pictured, the surgery in process 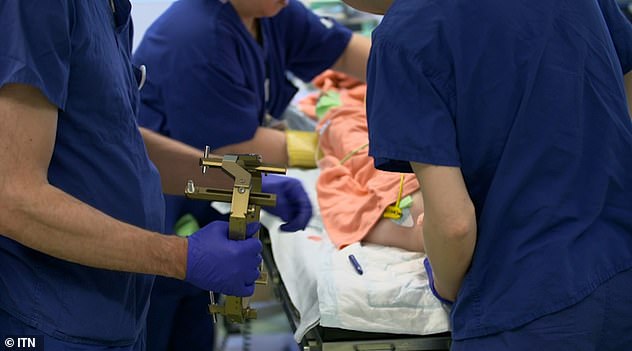 Ms Majewska said: ‘Viktoria had out of control movements all the time. Her arms and legs wouldn’t move normally and she was pushing her head down and her belly up.

Dystonia is the name for uncontrolled and sometimes painful muscle spasms.

The symptoms vary between patients but most often causes one part of the body or several to shake, twitch or twist.

Dystonia, of which there are different types, is thought to be caused by a problem with the part of the brain that controls movement. Often the cause is unknown, but sometimes it can be due to an inherited genetic problem, Parkinson’s disease, a stroke, cerebral palsy or multiple sclerosis.

Dystonia which starts in adult life usually remains focal to one part of the body. If dystonia starts in childhood, it tends to spread across multiple parts of the body.

It’s usually a lifelong problem, but treatment can help relieve the symptoms.

However, because many cases are undiagnosed, determining the true number is difficult.

‘We noticed that from a young age she couldn’t hold anything in her hands, such as toys, and had trouble keeping her head up because it was falling from side to side.’

Ms Majewska and her partner, Mr Kaftanikaite, struggled to look after their daughter while doctors tried to figure out what was wrong with her during a five-month stay in intensive care at The Royal Children for Hospital, Glasgow.

For the overwhelming majority, dystonia does not shorten life expectancy and is not fatal. But it can cause secondary complications which are life-threatening.

Not long after her diagnosis, at two years and eight months old, Viktoria and her family were flown to London where they awaited the procedure.

DBS, which may be offered to patients on the NHS if other treatments don’t work, involves implanting very fine wires with electrodes at their tips into the brain by drilling two 5p-sized holes into the top of the skull.

The wires are connected to extensions under the skin behind the ear and down the neck, which then connect to a pulse generator.

This allows electrical impulses to be sent to the brain, regulating abnormal communications that cause symptoms of dystonia.

Ms Majewska said: ‘She wasn’t able to do anything, until now.’ 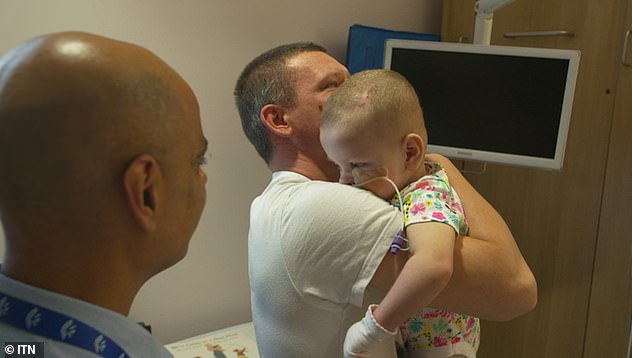 Viktoria is already seeing improvements. Pictured with her father since the operation 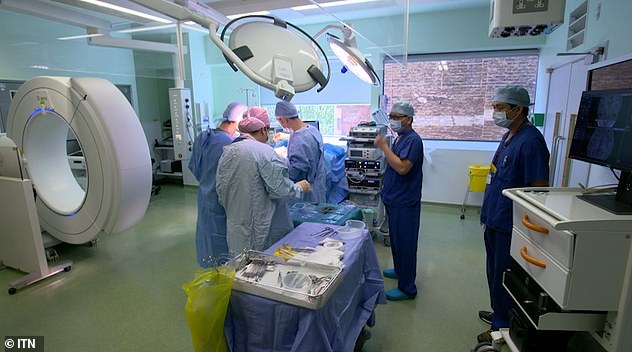 Young children who have cerebral palsy, have been born premature or suffered an injury at birth now have better hopes of being treated with DBS since Viktoria’s operation went so well 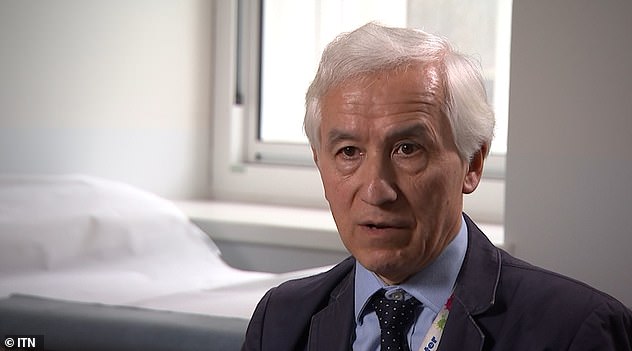 Viktoria’s chances of being free from various disabling and painful movements have been greatly improved.

Dr Lin said doctors now know that they can safely deliver DBS at two and a half years of age, which is promising for the future.

Young children who have cerebral palsy, have been born premature or suffered an injury at birth now have better hopes of being treated with DBS.

Dr Lin said they have been offering DBS to increasingly young children over the past 15 years, and had seen a five-year-old boy with cerebral palsy walk completely unaided after having DBS.

‘Viktoria’s case is exciting and potentially very significant because it may offer an opportunity for children with early movement disorders to benefit from DBS and have a better future,’ he said.

WHAT IS DEEP BRAIN STIMULATION FOR DYSTONIA?

DBS is a relatively new procedure that uses electricity communication between two components implanted in the body.

There two pieces of hardware are:

The two are connected with cables that pass under the skin.

When the generator is turned on, electrodes deliver high-frequency stimulation to the targeted area in the brain, blocking the signals that cause the symptoms of dystonia.

Abnormal movements and postures and/or dystonic tremor can be eased, as well as pain caused by dystonia.

DBS works most effectively for people who have an genetic dystonia or idiopathic – when there is no known cause.

The treatment is provided for those with inherited or idiopathic dystonia who have a severe generalised dystonia, neck (cervical) dystonia or dystonic tremor when other treatment options have failed to work well.

The effectiveness of DBS is thought to reduce as the proportion of life lived with dystonia increases.

Therefore, for children, ideally DBS should be offered early, preferably within a few years of the onset of symptoms.

For inherited and idiopathic dystonias, on average DBS reduces the severity of symptoms by slightly more than 50 per cent, according to the Dystonia Society, but experience varies widely.

Around one in five patients receiving DBS get very little benefit. At the other extreme, some can experience symptom reduction of 80 per cent or more.